The activists were conducting a march to celebrate a national holiday, but the authorities accused them of doing it for unsanctioned “political purposes.” 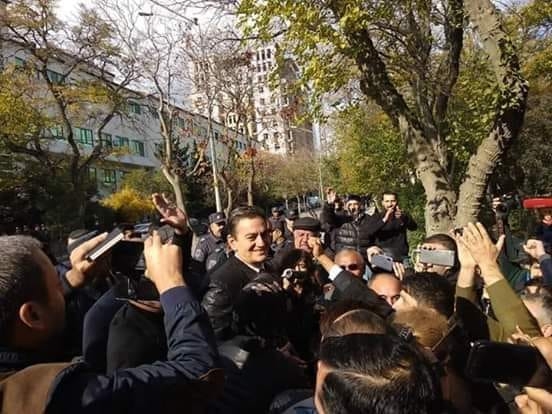 Dozens of Azerbaijani political opposition members, including a party leader, were detained as they took part in a holiday commemoration that the authorities said was an unsanctioned political action.

Ali Karimli, chairman of the Popular Front Party (PFP) of Azerbaijan, was arrested on November 17 as he was marching together with about 150 other party members towards Baku’s Alley of Martyrs, a cemetery for war heroes. The occasion was Azerbaijan’s National Revival Day, which marks the anniversary of the first large-scale nationalist protests against Soviet power in Azerbaijan in 1988.

In a statement issued the day after the arrests, the Baku City Police said that, in spite of being warned, the PFP carried out the march for “political purposes." As a result, 52 participants were detained; 41 of those were released the same day but 11, including Karimli, were arrested.

Two days later, Karimli was charged with a 2,500-manat (about $1,500) fine and released. Karimli’s lawyer, Fuad Aghayev, said the charge was holding an unsanctioned march.

"No one has the right to prohibit citizens from remembering heroes and we do not recognize such a ban and will visit the Alley of Martyrs when we consider it necessary," Karimli told a crowd of supporters after his release.

Three others were given 20-day administrative arrests, and seven were given fines of between 400 and 500 manats, PFP officials told the news website Caucasian Knot.

The events mirrored another police crackdown earlier this year: After a celebration in May of the 100th anniversary of the founding of the Azerbaijan Democratic Republic that was put on by some leading members of the political opposition, police arrested a number of the organizers.

Ali Hasanov, an aide to President Ilham Aliyev, blamed media for “spread[ing] unchecked, biased and one-sided information” about the arrests. “This has nothing to do with the violation of human rights and freedoms. It is maintenance of public order, not the issue of political affiliation which is the main criterion for police,” he told the news agency Azertac.

“Despite being members of a political party, their visits were not a political action, and they visited martyrs on the occasion of National Revival Day,” wrote activist Bakhtiyar Hajiyev on his Facebook page, where he also posted a video of the detentions taking place. “All political parties, citizens, and civil society activists have to condemn this ban,” he said, calling on them also to visit the Alley of Martyrs.