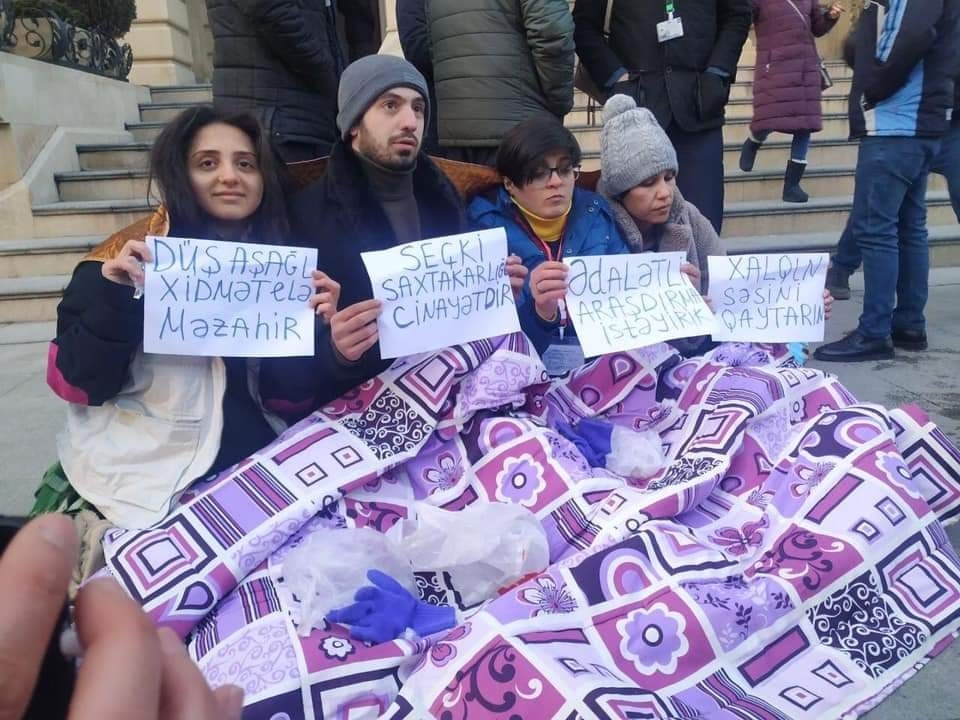 Protesters gather in front of the Central Election Commission HQ in Baku to protest elections they saw as falsified. (nidavh.org/Facebook)

Azerbaijani police have violently broken up protests following contested parliamentary elections, further tarnishing the vote that was intended to create an image of positive reforms in the country.

On the afternoon of February 11, a few dozen protesters – including several of the defeated opposition candidates – gathered in front of the office of the Central Election Commission (CEC) in Baku for a sit-in. They demanded that the results of the parliamentary elections two days earlier be annulled after independent observers registered widespread cheating, including ballot-stuffing and multiple voting.

While elections in Azerbaijan have regularly been falsified, protests against them have been relatively rare. This time, though, expectations among some in the opposition were higher, given a relative loosening of restrictions against the opposition and the presence of monitors from the OSCE, who did not observe the last parliamentary elections in 2015. Those high expectations led to a greater sense of resentment when the results turned out to be more of the same, said Akif Gurbanov, head of the Baku-based Institute for Democratic Initiatives.

“People understand that the promises the government has been making aren’t honest, so they are disappointed,” he said.

President Ilham Aliyev, whose New Azerbaijan Party and its allies maintained total control of the parliament following the vote, denied that there was any reason to doubt the results. “If the Azerbaijani people were dissatisfied with these elections, they would raise their voices,” he said during a meeting with Turkish members of parliament. “This shows again that these elections reflect the will of the Azerbaijani people and that is the most important thing.”

But many of the losing candidates disagreed.

“We are protesting total fraud in the country, fraud in the elections,” said Rabiyya Mammadova, one of the candidates, in an interview with BBC Azerbaijan.

As the hours passed, the protesters wrapped in blankets against the chill, more people came to join them. An official from the CEC came out of the building to invite some of the protesters in for a meeting, but they rejected the offer. Mammadova told Eurasianet that opposition candidates had made many complaints to the CEC in the course of the campaign, which they didn’t respond to, giving them little reason to expect help now.

The authorities considered the protest unauthorized, and once night fell police were called to the scene, where they detained many of the participants. Several were beaten by the police and sustained injuries.

“Some big buses arrived, and police came out of them and started attacking the protesters,” said Aynur Elgunesh, a freelance journalist who was covering the event, in an interview with Eurasianet. Elgunesh said she tried to stay away from the fray, as she has a leg injury that reduces her mobility. Despite that, an officer approached her and told her to “go to hell,” she said. She showed him her press card but to no avail. “He punched me in the head, I staggered and fell down,” she said. “Then policemen were kicking me … it hurt so much.”

Arzulla Buludlu, a member of the opposition Musavat party, also was wounded while being detained.

“Three policemen assaulted me,” Buludlu told Eurasianet. “When I asked them why they were doing it, one of them kicked me with his knee in my ribs. I fell down and he kicked my head.” Others who were detained demanded that the police get an ambulance for him, but they refused, he said. Eventually he was taken to the hospital and examined under police supervision. “The doctors said I should be hospitalized at least three days, but the police shouted at the doctors that I had to leave the hospital,” he said.

Mammadova, the candidate, had her hand broken. Mustafa Hajibeyli, another member of Musavat and the editor of a website, bastainfo.az, also was beaten and shared photos of his bruised face. Another journalist, Sevinc Vaqifqizi, was bruised on her face and arm. The OSCE reported that at least eight journalists had been injured.

“I am very concerned by last night’s detentions, violent incidents and mistreatment by law enforcement representatives,” said Harlem Désir, the OSCE Representative on Freedom of the Media, in a statement on February 12.

Images and video of the chaos were widely shared on social media, but police denied that anyone was injured. Elgunesh said she personally told the police spokesman, Ehsan Zahidov, about her injuries. “I called him and told what had happened to us,” she said.

Police ultimately forced all of the demonstrators on to buses, where they were driven around for two hours before being freed outside the city center.

“What was the point of these atrocities?” wrote Ali Karimli, the head of the People’s Front Party of Azerbaijan, on Facebook. “Let’s leave aside the law, that has long been ignored. But there is also reason and logic, which is not being used to rule the country.”

Gurbanov of the Institute for Democratic Initiatives said the authorities seemed to initially accept the protesters’ presence, but as more people began to arrive and more were livestreaming the event, they got worried. “They felt there was a risk that if it wasn’t prevented then, it would create a new wave and so they had to crack down,” he told Eurasianet.

“As always, the government has a great fear of street protests because they always see in them a potential revolution,” said Leila Alieva, a political analyst and visiting scholar at the University of Oxford. “The protesters are the new elite, young and educated people, whom the government should be attracting. But instead they are driving them further into the opposition.”