The government had been silent since the investigation into massive corruption was released. Now Ilham Aliyev says “some forces in the West” are behind it. 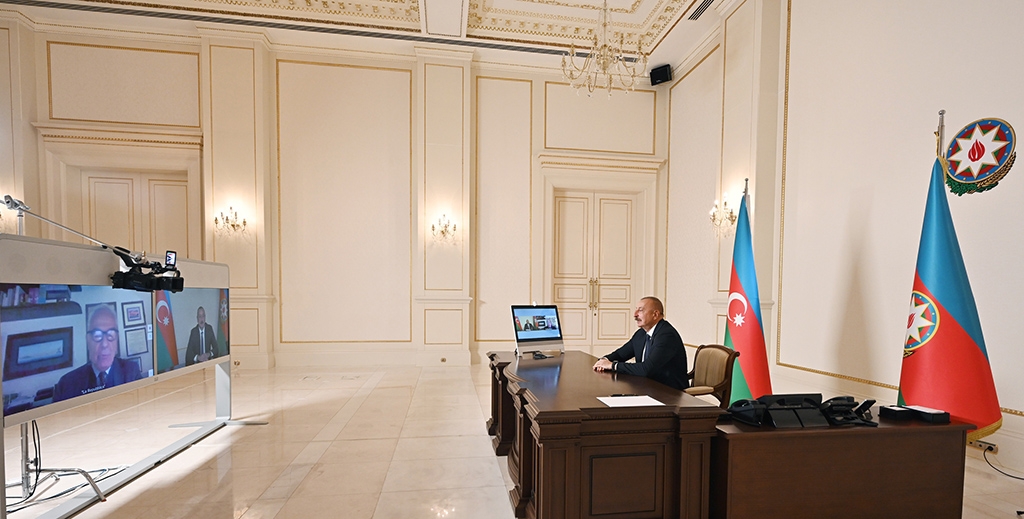 After ten days of silence over allegations of massive corruption tied to senior Azerbaijani government officials and their families, the country’s president finally responded.

In an October 13 interview with Italian newspaper La Repubblica, Ilham Aliyev was asked about the report that members of his family and close associates have bought real estate in London amounting to nearly $700 million.

Aliyev responded to the question by claiming that the report was the work of "some forces in the West" and  "insinuations or half truths in order to discredit the image of Azerbaijan and undermine Azerbaijan’s position.”

The reports were part of the Pandora Papers investigative journalism project, based on a leak of nearly 12 million documents that exposed financial crimes including hidden wealth, tax evasion and money laundering by political leaders from around the world. The documents were acquired by the International Consortium of Investigative Journalists.

The information about Azerbaijan was some of the most explosive in the Pandora Papers, tracing how family members and close associates of Aliyev had acquired staggering volumes of property in the UK. It also implicated the British government in the Azerbaijani dealings, finding that the Aliyevs made a profit of $42 million after selling some of their property to the Crown Estate, the government body managing the royal family's holdings.

The report did not address how the Aliyevs came into so much money.

In the interview, Aliyev did not directly get into the specific real estate deals his family was reported to have made, but said generally that many of his relatives were successful in business.

He noted that he had been a businessman himself before coming to power in 2003 and claimed that as soon as he became president, he transferred all his business activities to his family.

"It’s not a secret in Azerbaijan that my relatives, family members are involved in business, involved in charity, involved in a lot of things which are happening now in Karabakh," he said.

Aliyev also implied the Pandora Papers were a “slander campaign” linked to pro-Armenian forces in the West who were seeking revenge after his country's victory in the war last year against Armenia.

When the Pandora Papers were released on October 3, many of the world leaders and other figures implicated in them issued denials. Azerbaijan’s government and its press, by contrast, studiously avoided the topic altogether.

Independent and opposition voices have, however, seized on the reports.

The National Council of Democratic Forces (NCDF), an umbrella opposition group, issued a statement saying: “It is impossible for Aliyevs to become one of the richest families in the world legally."

The NCDF statement put the Pandora Papers in the context of the many other reports over the years of Aliyev family members and associates spending inexplicably large amounts of money abroad.

“There is only one way to explain how this is possible: corruption,” the NCDF wrote. “Both recent and well-established international research has shown that corruption in Azerbaijan is state policy, and this policy is personally led by Ilham Aliyev.”

Aliyev’s explanations of the Pandora Papers allegations did not satisfy government critics.

Ali Karimli, the chairman of the Popular Front Party of Azerbaijan (a member of the NCDF), wrote on Facebook that even for a decade before he became president, it was illegal for Aliyev to have been running the businesses he did because he had been a vice president of the state oil company SOCAR starting in 1994 and a member of parliament the year after.

Karimli further asked why Aliyev has never made his finances public, and why his family invests their money abroad. “Maybe Ilham Aliyev does not believe in the social and political stability in the country; does he consider it temporary?” he asked. “Or doesn't he believe that his power will last forever? Why did he remove most of his wealth from the country?”