Azerbaijani Shias gather for Ashura, under close watch from the state

The government tried to outlaw some of the more extreme practices of the holiday, such as self-flagellation, but the results were mixed. 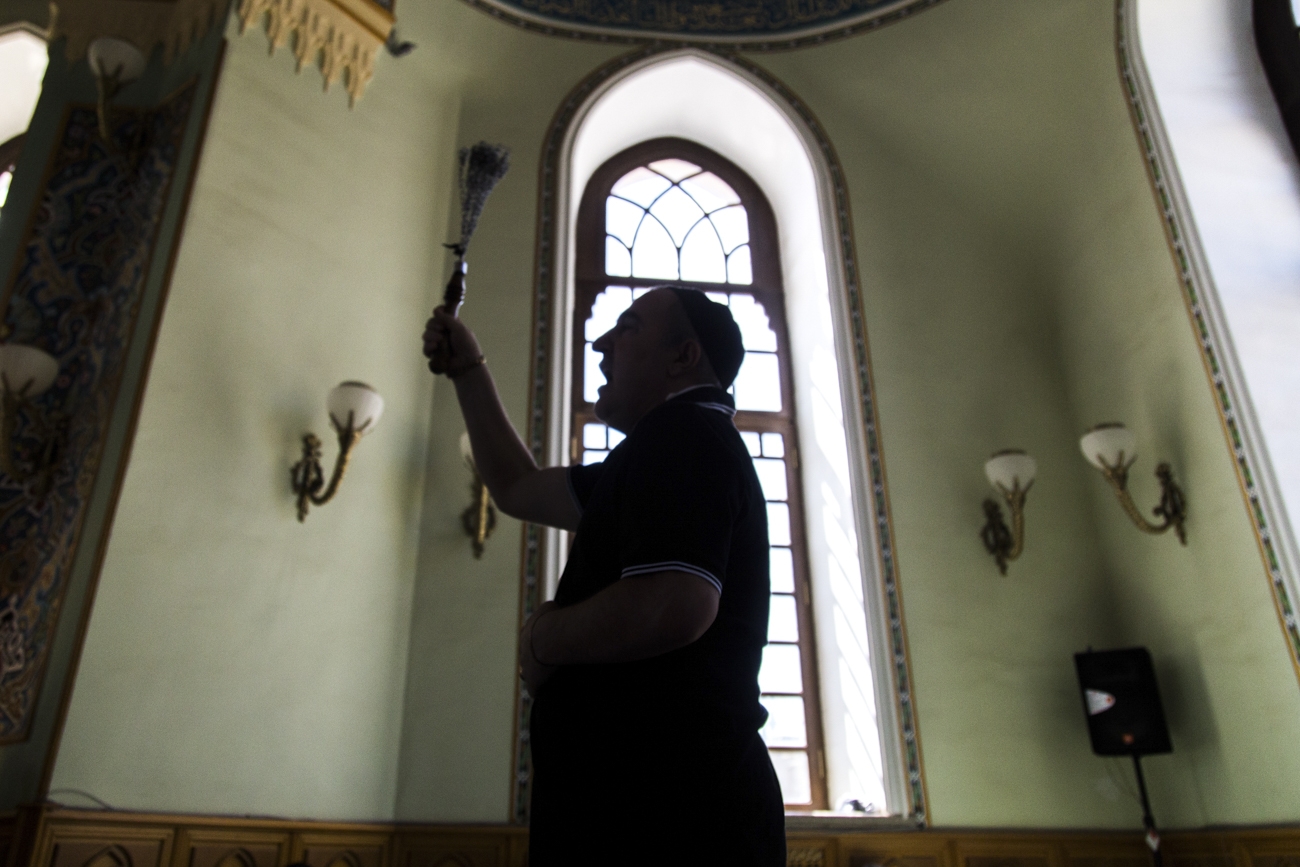 A man performs Tatbir, a ritual where people beat themselves with chains as a sign of expressing grief for Imam Hussein and a willingness to give their blood for him. (All photos by Ehtiram Jabi) 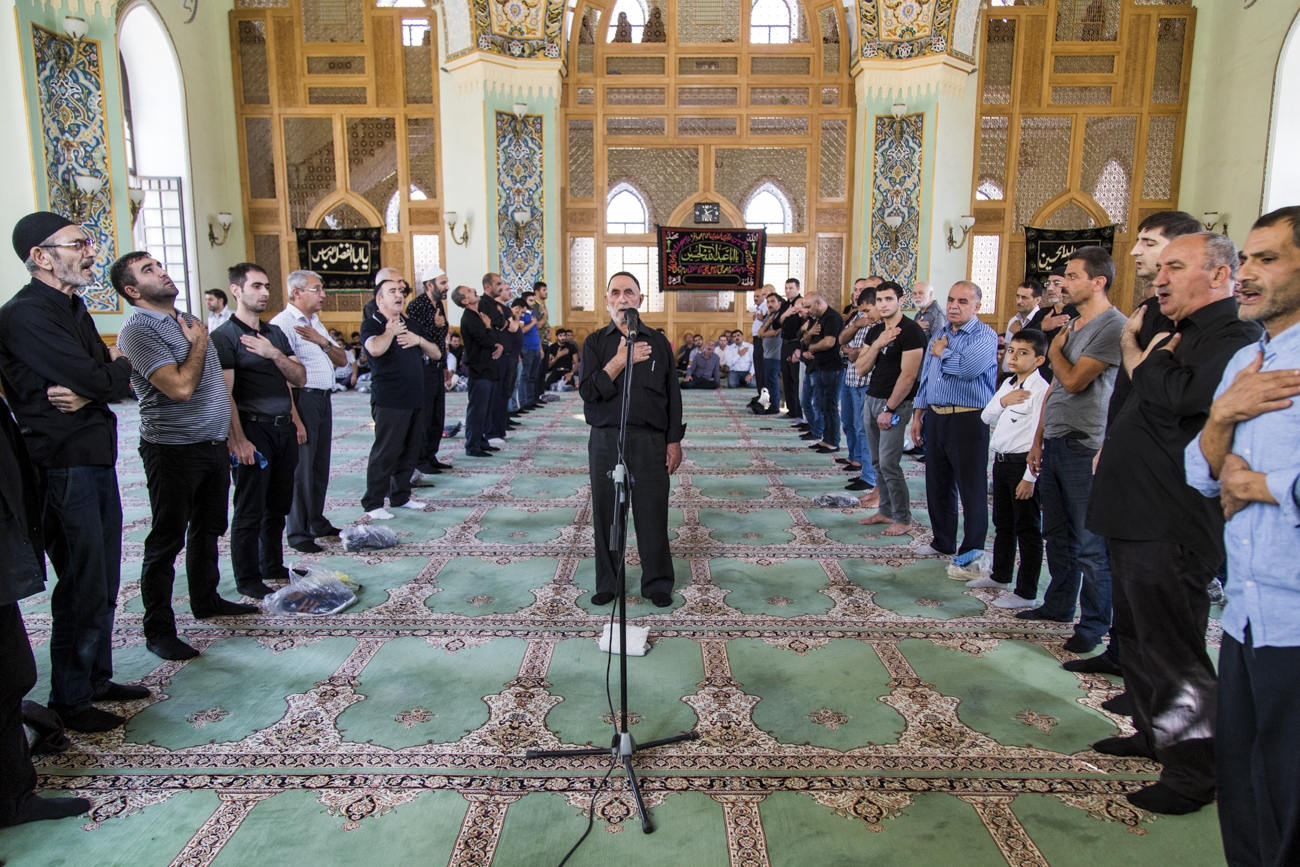 Men line up inside the mosque to perform religious songs in honor of Imam Hussein. 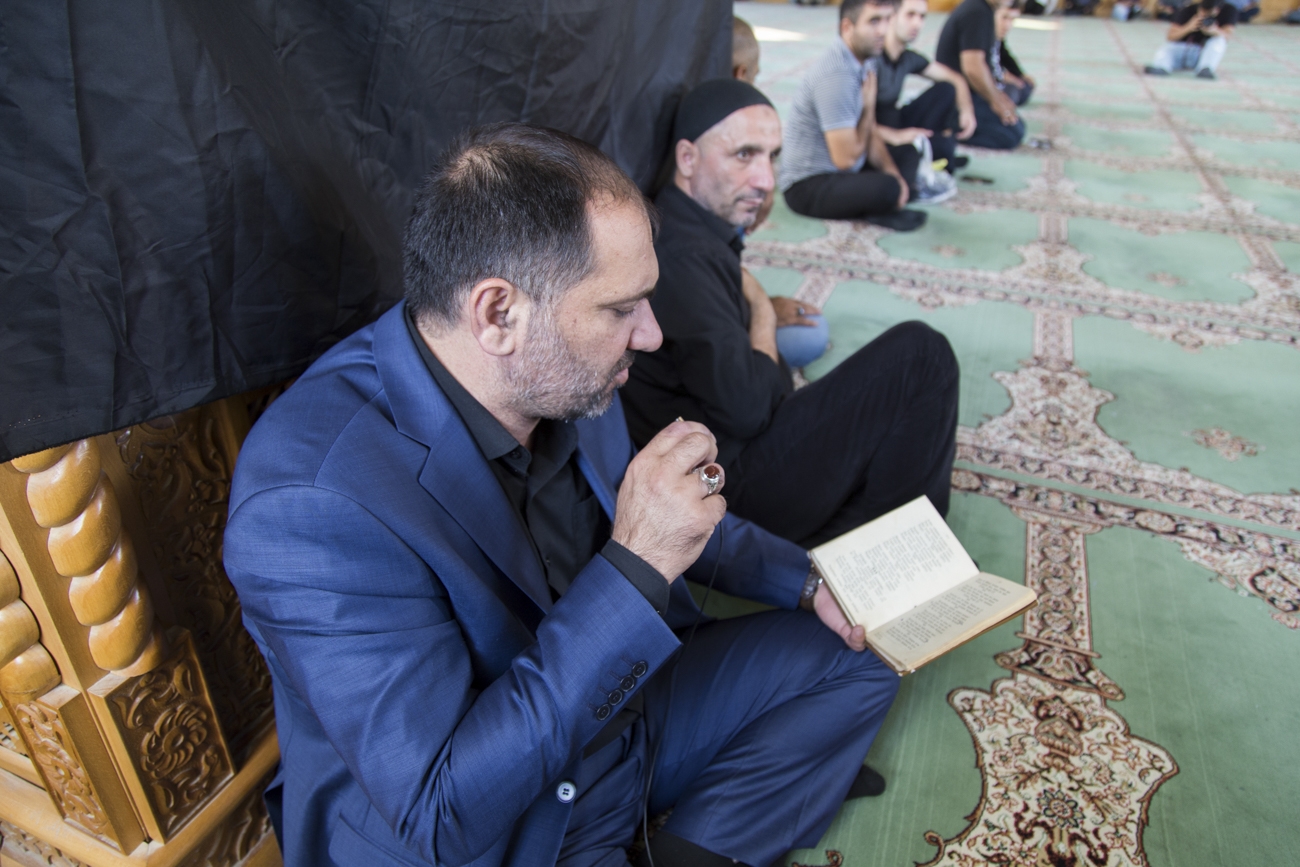 A man performs a religious song inside the Taza Pir Mosque. 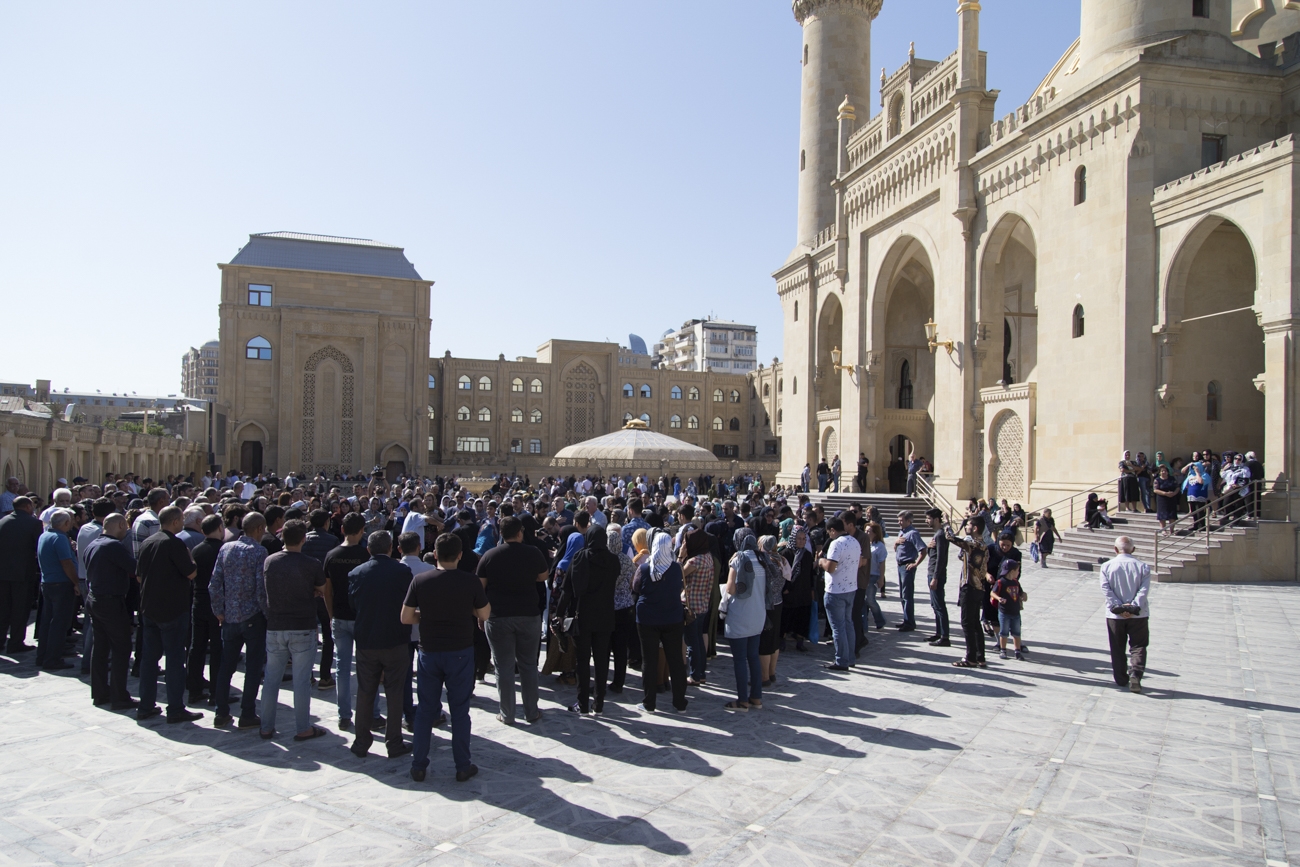 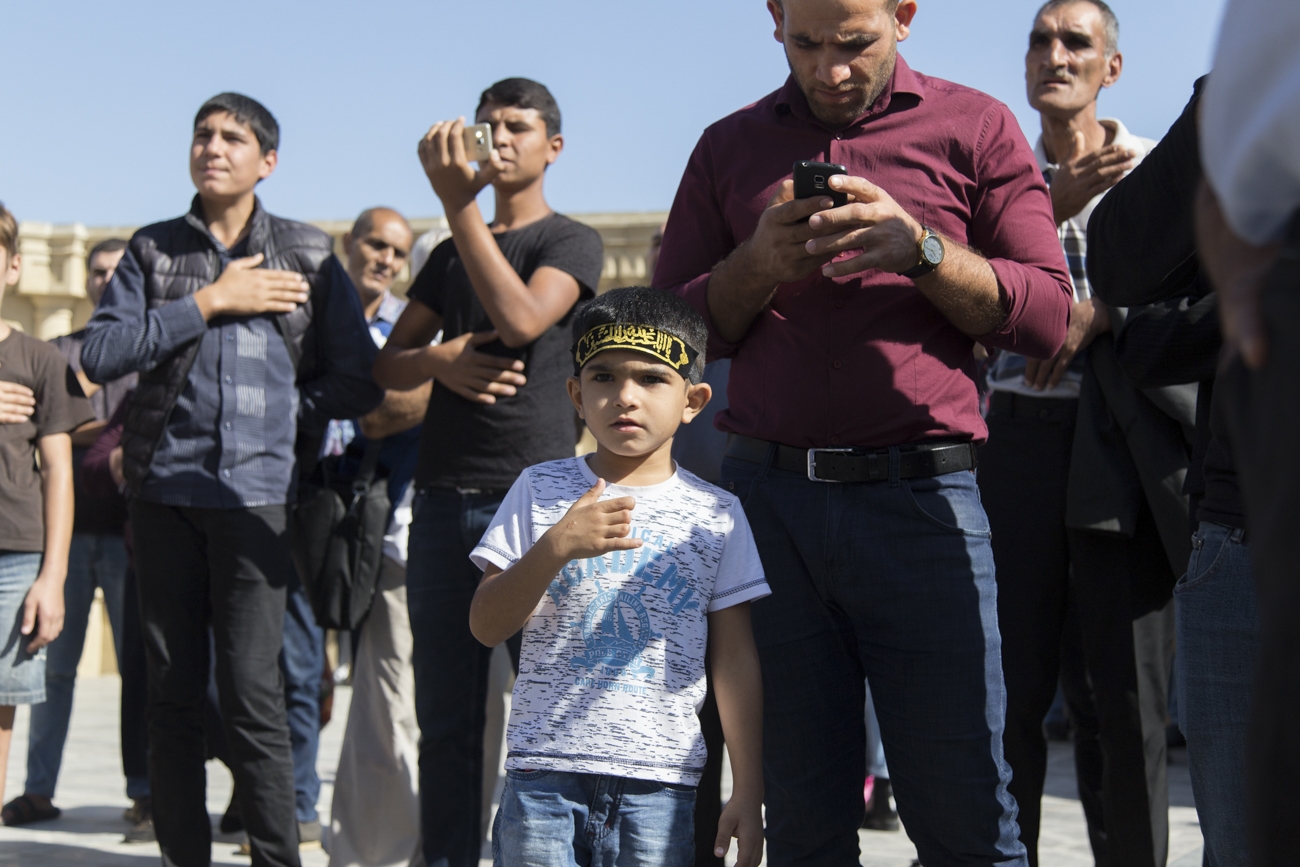 A boy wearing a headband with a religious inscription hits himself on the chest while listening to prayers. 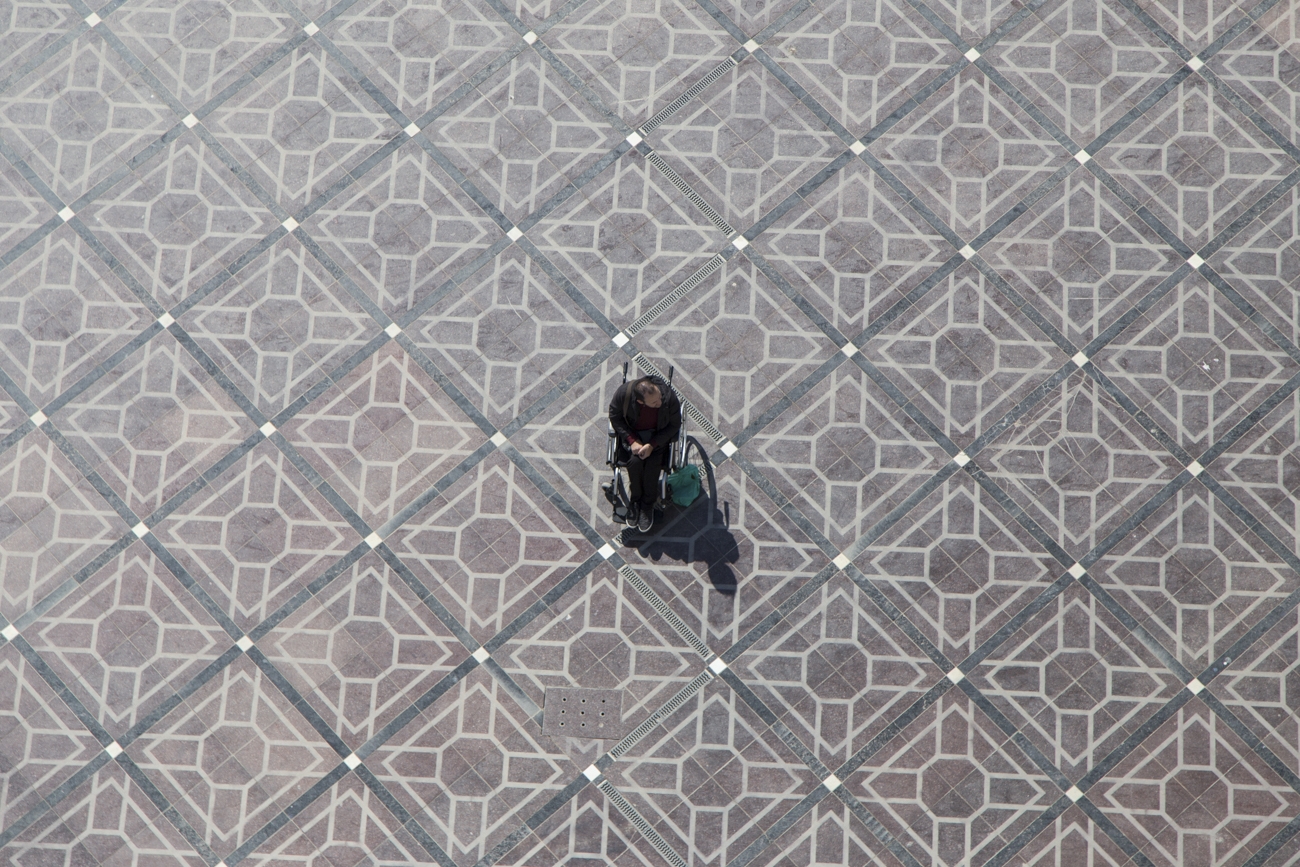 During Ashura, people go to the mosques to beg. 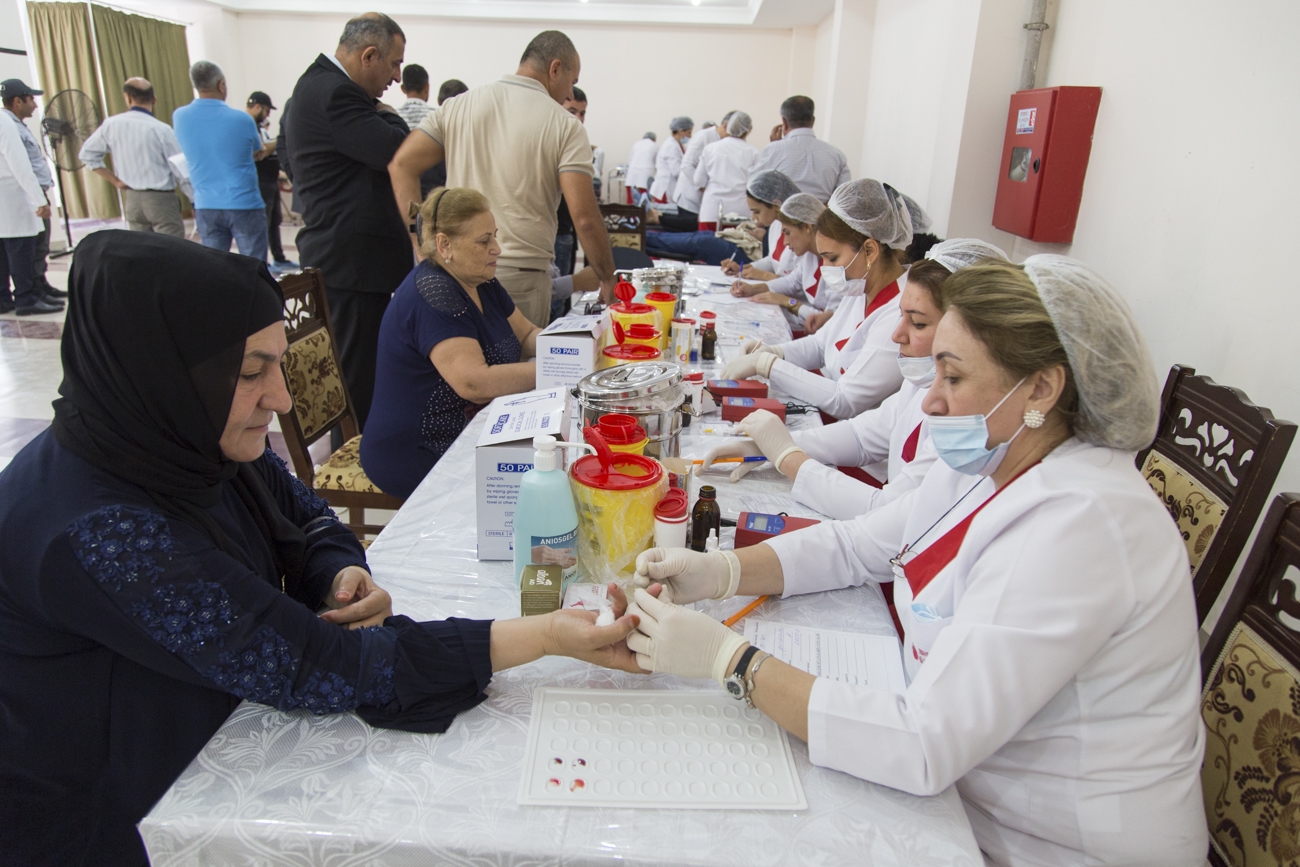 During Ashura, blood donation centers are created in mosques and out-patient clinics. This year, blood could be donated in 12 places around Baku. 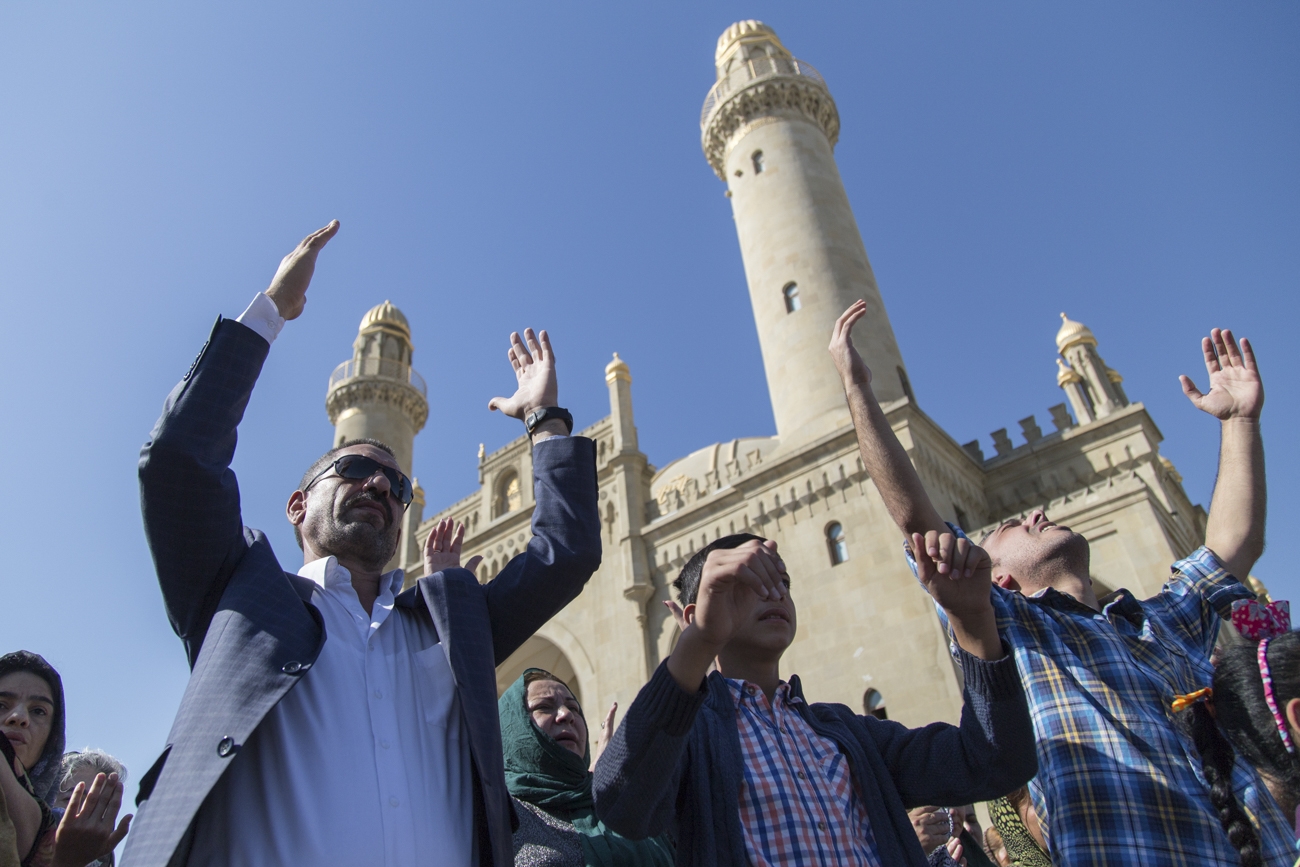 Men raise their hands at every mention of the sacred name. 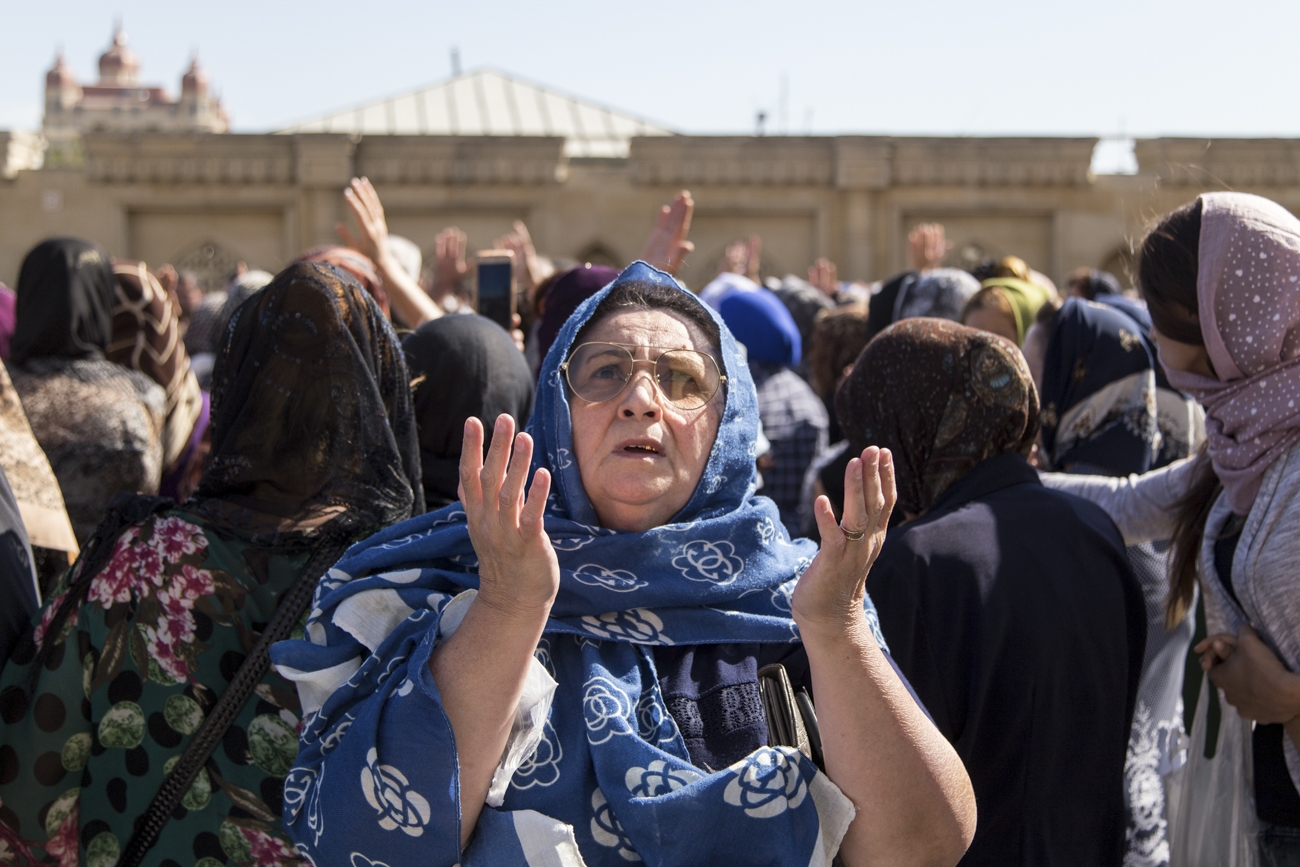 An elderly woman prays in front of the mosque. 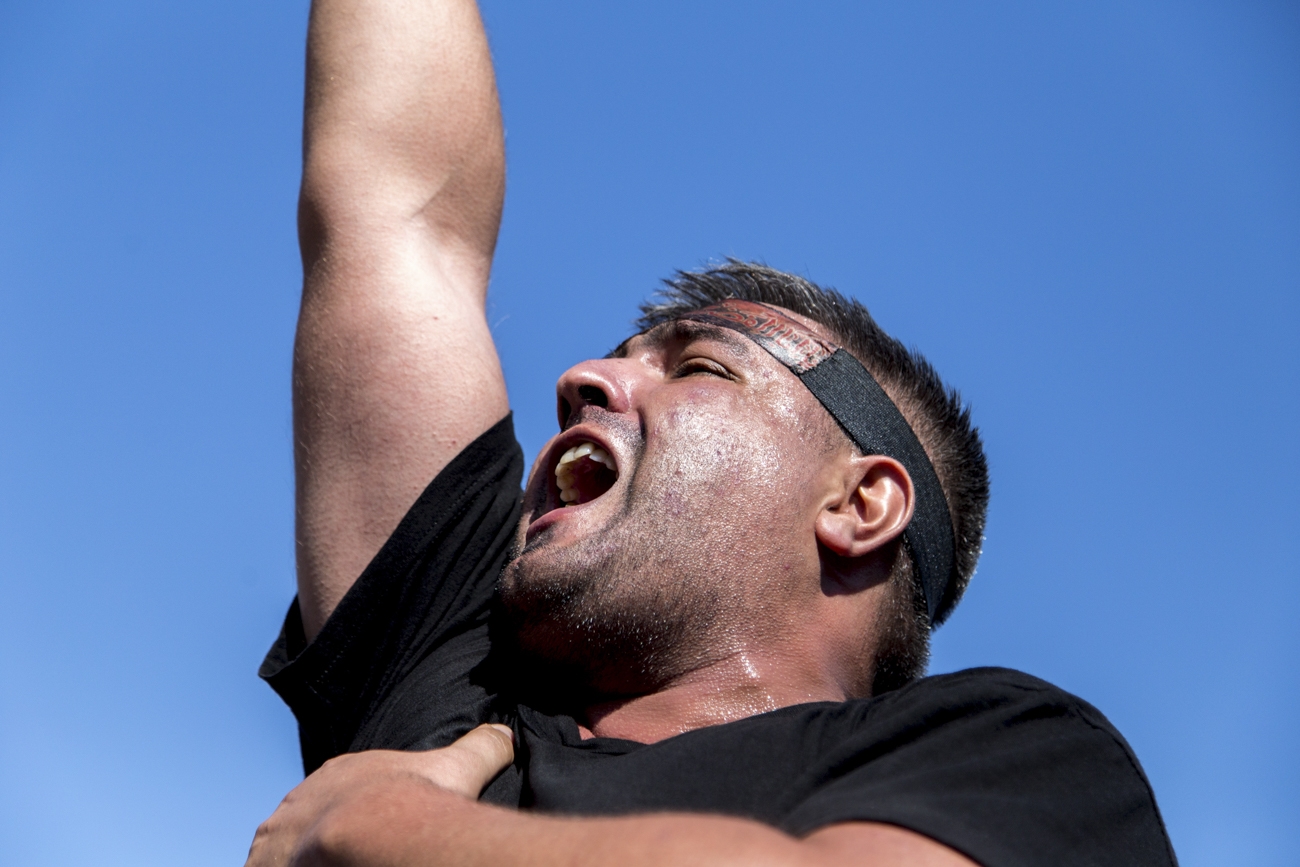 A man sings a marsiya and beats himself on the chest. A marsiya is an elegiac poem honoring Imam Hussain. 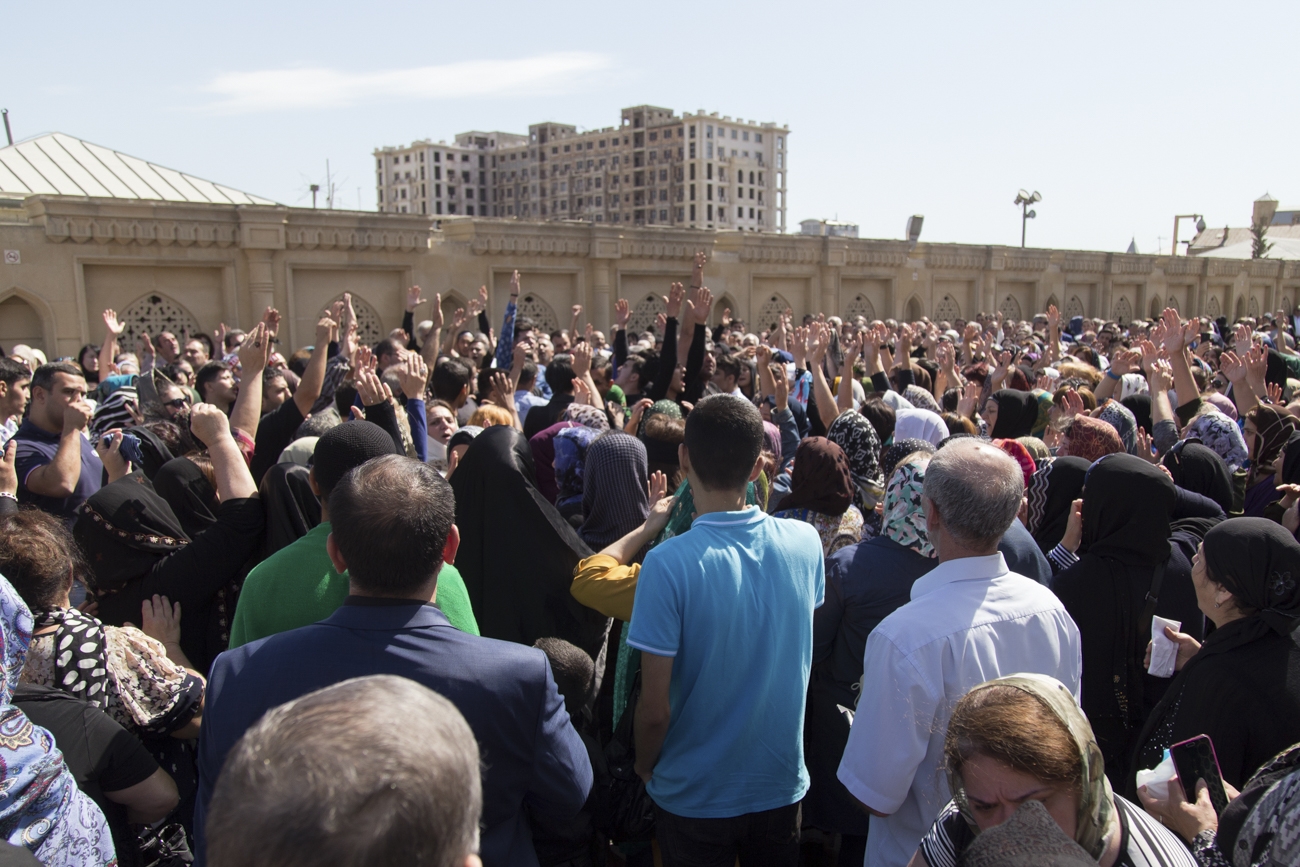 A crowd gathers in front of the Taza Pir Mosque, to perform the mourning and self-flagellation ceremonies of the feast. 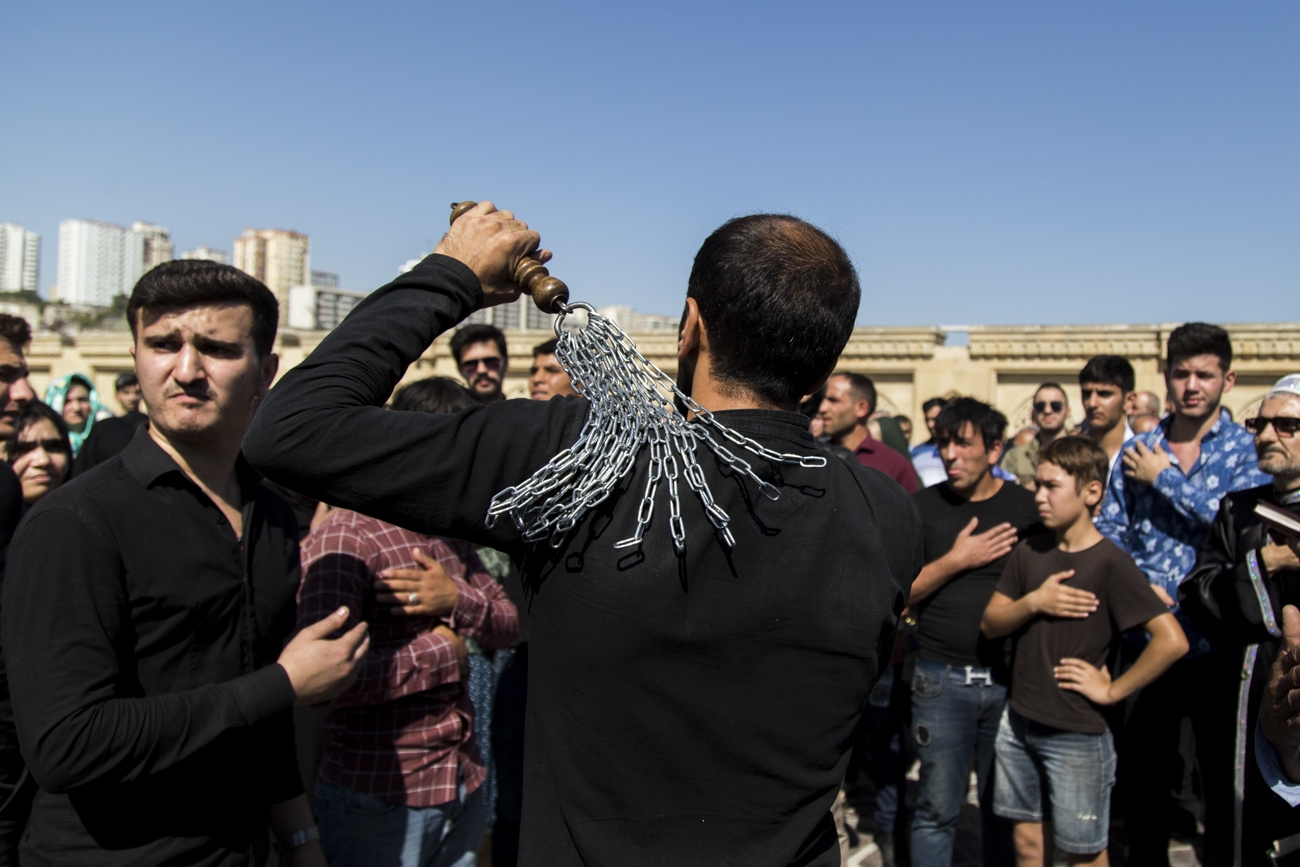 A man beats himself with chains in the square outside the mosque. 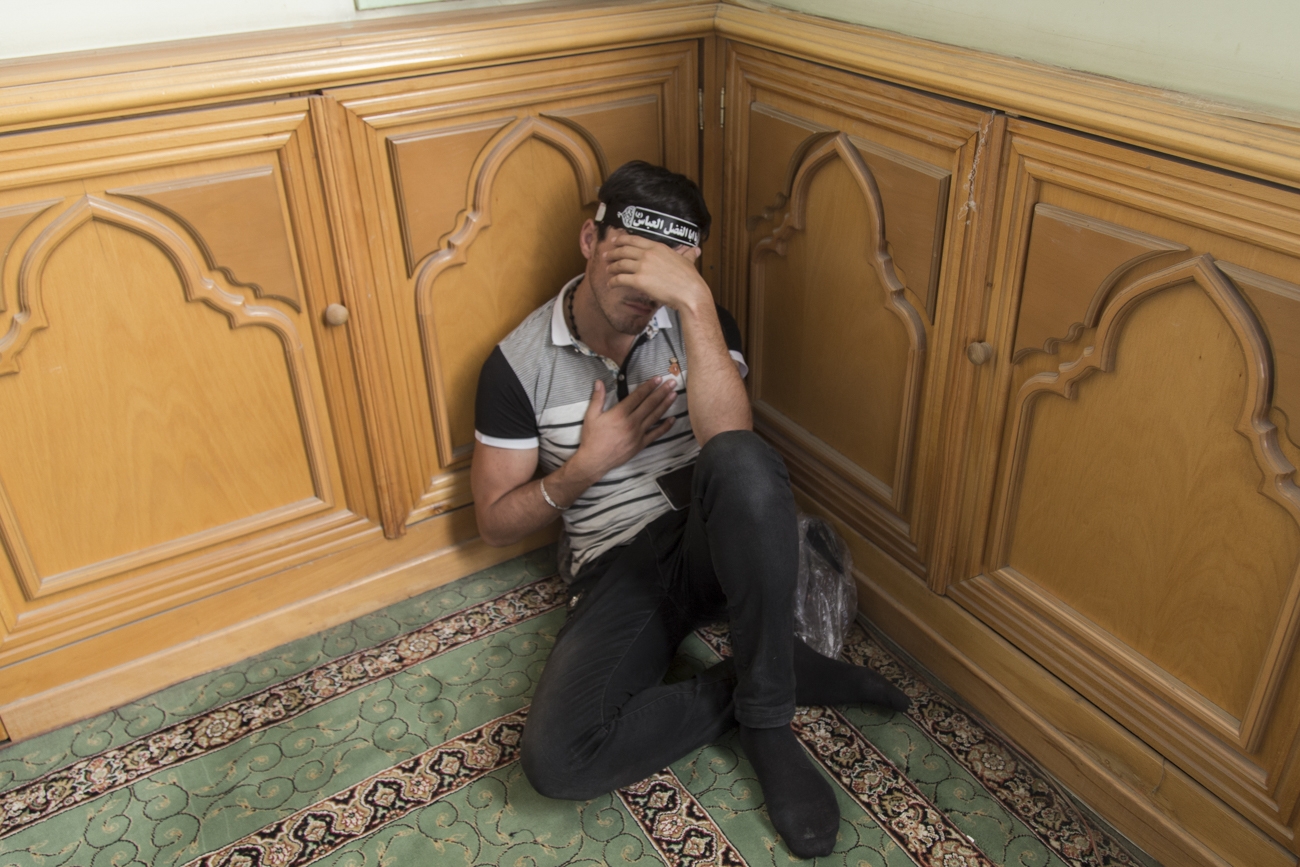 A young man sitting in the mosque listens to a marsiya.
prev
next

Azerbaijan's faithful gathered for the commemoration of Ashura, one of the holiest days on the calendar of Shia Islam, amid a period of heightened tension between the staunchly secular government and a rising population of pious Shia Muslims.

At the Taza Pir Mosque in central Baku, roughly two thousand Muslims gathered on September 20 to commemorate the death of the Prophet Mohammed's grandson Hussein. Worshippers said the ceremony was more sparsely attended than in the two previous years, which they attributed to government pressure. And toward the end of the event, scuffles broke out between some worshippers – who were whipping themselves with chains, the most controversial element of the Ashura ritual – and government officials, who are trying to stamp out the practice in Azerbaijan.

The majority of Azerbaijanis are Shia Muslims and, as elsewhere in the region, expressions of religion are on the rise following the collapse of the Soviet Union and its atheist ideology.

Many Azerbaijanis remain thoroughly secular, however, and are uncomfortable with the growth and intensity of the Shia revival. Many accuse Iran of exporting its particularly strict version of Shia Islam, including Ashura commemorations, to Azerbaijan. The government has accused religious leaders of trying to overthrow the state and the majority of political prisoners in the country, according to human rights observers, are imprisoned for religion-related offenses.

Last year's Ashura commemorations were the most widely celebrated in post-Soviet Azerbaijan since independence. Images from the event, which included self-flagellation with chains and the participation of children, shocked many secular Azerbaijanis.

This summer, a still-unexplained attack on the mayor of Azerbaijan's second city, Ganja, and subsequent protests in which two police officers were killed, was blamed by the government on radical Shia Muslims. One suspect in the case was planning to attack Ashura events in Ganja this year, police said.

Ahead of this year's Ashura, government officials tried to restrict the more extreme practices. Government-affiliated religious figures, as well as civilian officials, declared that people should not whip themselves with chains, that children should not take part in the ceremonies, and that they should be held only on the grounds of mosques and not in streets.

“Our religion rejects self-flagellation, wounding yourself,” said Shahin Hasanli, a Baku imam, in an interview with 1news.az. “There is a classical form of lamentation, accompanied by beating the chest with the hands, and this is seen as normal by society.” Hasanli instead tried to steer believers toward an Ashura blood drive. “This is a pious act and suits the spirit of Ashura.”

Siyavush Novruzov, chairman of the parliamentary Committee on Public Associations and Religious Structures, told reporters: “Those who want to commemorate Ashura can do it in the way that Islam requires.”

The authorities were “shocked” by what happened in 2017, said Altay Goyushov, an Azerbaijani historian and political commentator. “In the 1990s, self-flagellation would have been unimaginable. [...] They are asking, 'how can we contain it,' but their only methods are coercion,” he told Eurasianet.

At Taza Pir, the results of these efforts were mixed.

There was a marked police presence in and around the mosque, including a female officer tasked with inspecting the bags of incoming women worshippers. The officer, who accessorized her uniform with four-inch heels, oversized sunglasses and multicolored nail extensions, offered a vivid illustration of Azerbaijan's cultural divide.

Inside, a wide range of Bakuvians gathered; while the officer's brand of flamboyant style was rare, the crowd would not have looked out of place at a mall or on the metro. There were many children, but worshippers said there were fewer than in previous years. As the crowd gained a critical mass, some of the men started chanting, and others gathered in a circle around them. The leaders of the chants beat themselves vigorously on the chest, an expression of their grief over Hussein's death, with bystanders joining in with varying degrees of force.

As the intensity grew, a handful of the leaders – mainly young men wearing black clothes and neat beards – pulled out whips fashioned from chains and used them to flagellate their backs. Clearly mindful of the new rules, they asked photographers not to take shots of their faces.

The spectacle was a far cry from many parts of the Shia world, where the chains can include sharp blades and the most devoted draw blood. But it was still too much for Azerbaijan's authorities, and at one point an elder representative from the Caucasus Muslim Board – the Soviet-legacy state body overseeing Islam in Azerbaijan – forced his way into the center of the circle and tried to stop the men from whipping themselves.

“My son, they are going to take you and then we will be trapped in your shit,” the elder told one of the young men, apparently concerned about the repercussions of the banned practice taking place under his watch.

One elderly woman stepped in to defend the young man, berating the official as a “son of a dog” and tearing off his papakha hat, before a police officer intervened and separated them. Eventually, the young man returned to the circle and they continued, including the self-flagellation.

One worshipper, 60-year-old Ali, approached a journalist to discuss the episode. “Why are they stopping him from beating himself? He isn't hurting anyone but himself!”

Meanwhile, the mosque had set up a blood donation site and the lines to it were long.

Participants said that the year before, the number of those engaging in self-flagellation had been much higher. One, seventysomething Afik, reminisced about marking Ashura in private homes during the Soviet days. “We would always have one person standing guard to watch for any communists,” he said. “If one came we would run out the back and hide for half an hour and then come back.”