Those whose homes were destroyed in last year’s war were promised compensation from the government to rebuild. Many are still waiting. 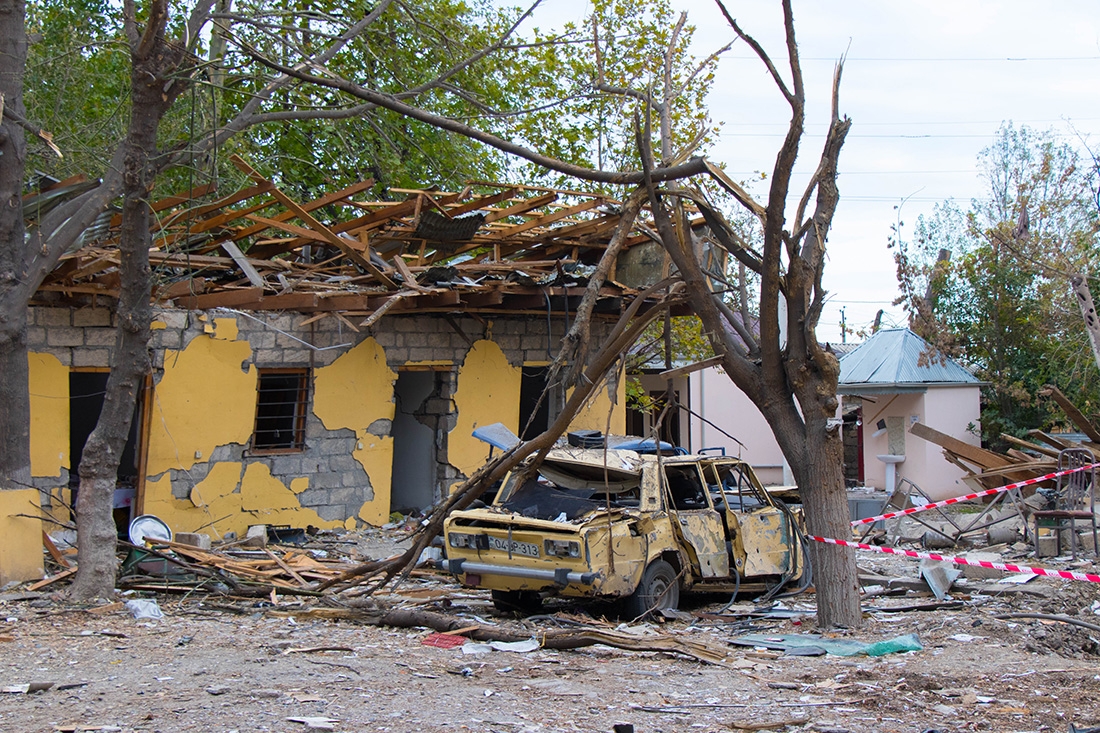 For nearly a year, Vusala Aliyeva has been living in a tent inside her kitchen in Ganja, Azerbaijan’s second city.

One day during last year’s 44-day war between Armenia and Azerbaijan, a missile struck her house. She was wounded, losing an eye and 14 teeth. Her house – along with the small bakery she operated – was destroyed. Only the kitchen remains habitable, and that is where the entire family of six sleeps.

Since then the family has been struggling to get by, depending on charity from her neighbors. “I used to feel like a millionaire,” she told Eurasianet. “Now those days are gone, I just want to get out of beggar mode.”

Ganja was the Azerbaijani city hardest hit during the war. Four separate ballistic missile attacks on the city killed 23 people and wounded nearly 120. Civilians in other cities in western Azerbaijan including Barda, Tartar, Aghdam, Aghjabedi, and Naftalan also were subject to bombardment from Armenian forces; Human Rights Watch described the attacks on populated areas as “unlawfully indiscriminate.”

Soon after the war ended, the state prosecutor’s office said that 3,410 houses and 120 multi-apartment residential buildings, as well as 512 other civilian facilities were “severely damaged” in the attacks.

The government promised to help. On December 14, President Ilham Aliyev signed a decree laying out a system of compensation for Azerbaijanis whose houses were damaged or destroyed during the war. Families whose houses were destroyed or rendered dangerous were to get 6,000 manats (about $3,500) per household and an additional 1,500 manats ($880) per inhabitant. For houses suffering “other damages,” the payment would be 1,000 manats ($588).

On top of that, the government promised to rebuild the badly damaged houses and to renovate the less-damaged ones.

The decree further specified that the Cabinet of Ministers would provide the funding and that local governments would distribute it.

At a cabinet meeting three weeks later, Prime Minister Ali Asadov said that 9.1 million manats ($5.4 million) had been allocated to implement the decree. He said that as of early January, 25 percent of the payments had been made and that the rest would be made within a week.

But nine months later, many of those whose houses were destroyed or damaged complain that their houses haven’t been rebuilt and they haven’t gotten the money they were promised.

In Ganja, Aliyeva said that she got nothing. She repeatedly wrote letters to the authorities, including to the president, detailing her plight, but only got a meeting with the city’s mayor after she posted a video on social media. She said the mayor, Niyazi Bayramov, promised her the full payment that the decree called for – that is, 6,000 manats for the household and 1,500 manats for each of the six family members.

But when she got the payment deposited into her bank account, it was only 1,000 manats. Aliyeva’s husband called Bayramov’s office, only to hear his assistant say the local government has no “money to give away” for the family.

She next turned to local media, which also produced no results. She has written the Ministry of Finance, and continues to wait for a response. “I already gave up on them rebuilding the house,” she says, “I only want the money I was promised.”

An official from Ganja’s local government told RFE/RL in response to Aliyeva’s complaint that a state commission made up of officials from several ministries determines the type of damage a house has suffered, not local authorities. He also emphasized their limited budget.

Aliyeva says that some of her neighbors whose houses weren’t so badly damaged are getting fully renovated, when hers is not. Rumors have spread in the community that the differing assessments are the result of corruption.

Parviz Aliyev, who lives in the settlement of Banovshalar (“Violets”) in the Aghdam region, said his house is one of the most damaged properties in the area. He said the authorities told him his home was only in the less-damaged category, but he refused to allow the house to be renovated because he thought it needed to be totally rebuilt.

“I agreed finally and they started working about 10 days ago,” he told Eurasianet. “Because I cannot spend another winter without a roof over my head.”

Many of the disgruntled residents have similar complaints: that they only get 1,000 manats when their house is in fact severely damaged, and that the “renovation” that the government offers is superficial and does not repair structural damage, meaning the house can still be dangerous to live in.

A resident of Tartar told local news outlet Abzas that he is going to “abandon his Azerbaijani citizenship if my house isn’t rebuilt.”

One local NGO, Institute for Citizens Rights, is offering legal assistance to families and business owners who lost property in the war. As part of that work, the organization gathers complaints about the reconstruction and compensation process and delivers them to the government.

The Aghdam-based manager of the project, Ilhamiz Guliyev, is himself a resident of the area whose house was damaged in the war and who didn’t get the promised compensation. He found others in the area who had similar complaints and in January presented his evidence to the Cabinet of Ministers. But he said that the cabinet referred the complaint to another body, the State Agency for Development of Small and Medium-Sized Businesses – despite the fact that none of the complainants had been businesses. “This tells you how the system for complaints works,” Guliyev told Eurasianet.

Guliyev estimates that for every homeowner who got compensated as the government promised, there are two or three others who got insufficient compensation or nothing.

He said he isn’t sure about the corruption rumors, but has noticed that in some cases homes appeared to have been targeted for renovation because they were on main roads and thus visible to passing high-ranking officials, or to show them off on state media.

His more formal NGO project was only launched in August, and Guliyev said he is still waiting for a response from the Cabinet of Ministers to the complaints he gathered. If that doesn’t work, he said the complainants will go to court.

Uzbekistan: Mirziyoyev romps to victory, but with reduced vote share