The blockade appears to be part of an increasing pressure campaign on the road and the Armenians who depend on it, and the protesters appeared to be ready to stay. 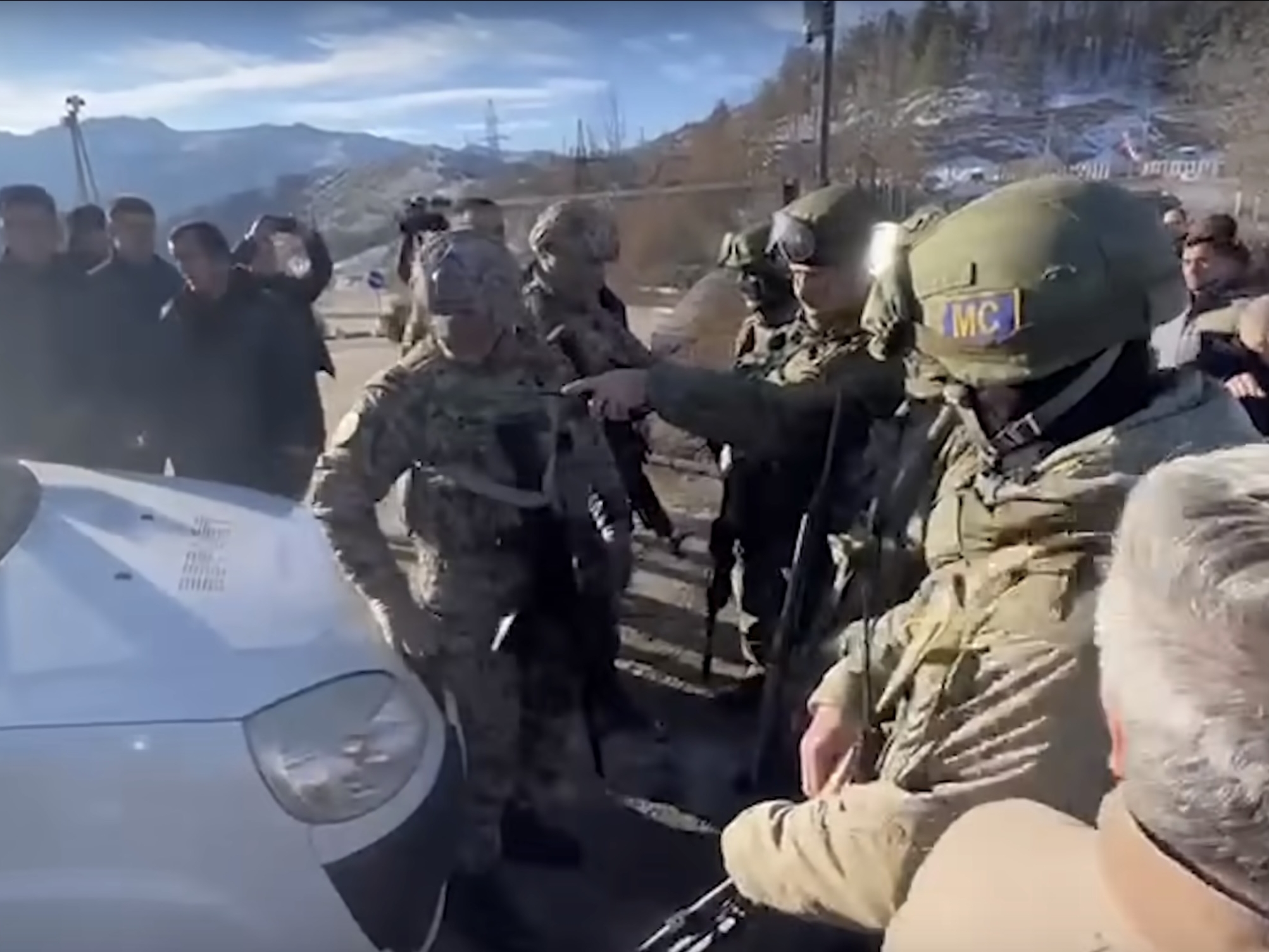 A group of Azerbaijanis have blocked the road connecting Nagorno-Karabakh to Armenia, the second time traffic on the corridor has been disrupted in just over a week as Azerbaijan continues its campaign of pressure on the vital artery.

Starting at about 10:30 am on December 12, a group of several dozen Azerbaijanis belonging to government-linked environmental organizations held a demonstration on the road near Shusha. The protesters said they were calling attention to what Azerbaijan has claimed was illegal mining in Karabakh, and the use of the road to transport the minerals into Armenia.

They held signs, in Russian, English, and Azerbaijani, reading “Illegal Excavation is a War Crime,” and “Exploitation of Mineral Deposits=Money Laundering.”

Many Azerbaijani news media were on the scene and recorded scuffles between the protesters and the Russian peacekeeping troops, who have guarded the road since the 2020 war between Armenians and Azerbaijan. In one scene a Russian soldier knocked away the microphone of an Azerbaijani journalist, and a Russian soldier also reportedly hit a car belonging to the news website Report.az with the butt of his rifle. Azerbaijani soldiers also were on the scene, and in one video were shown coming face to face with Russian peacekeepers, trying to get the latter to allow a media vehicle to pass.

The protesters did not explain who they represented, and they were presented in pro-government media as “environmental activists,” but there was plenty of evidence of an official hand in the events. One of the protesters, Narmina Garibova, told Report.az that the Ministry of Ecology and Natural Resources had provided tents for them to stay in. One protester was wearing a jacket from AzerSu, the state water company. One writer known for his pro-government stances, Gan Turali, was among the protesters.

By the time the sun set in the region the protesters still had not dispersed, and they appeared to be ready for the long haul, erecting tents and starting a bonfire. Report.az reported that cranes had brought in “modular dormitories” for Russians soldiers to stay in. “It is believed that the peacekeepers have come to the conclusion that the actions will continue until the night,” the site wrote.

“We can stay here for months,” Garibova said.

The ethnic Armenian residents of Karabakh, for whom the Lachin Corridor represents their only outlet to the outside world, reported cars lined up for kilometers as traffic was blocked. Closer to Stepanakert, the de facto capital of the territory, local police had set up their own blockade in order to prevent local Armenian residents from going to the protest scene and the confrontations that might ensue. Some Armenian residents who managed to evade those blockades were turned back before they got to Shusha by Russian peacekeepers.

Meanwhile, as this piece was published other residents continued to gather in Stepanakert, planning to discuss next steps.

It was the second such Azerbaijani blockade in a little more than a week. On December 3, the road was closed off for several hours during a standoff between Azerbaijani government workers and Russian peacekeepers. The Azerbaijanis said they were trying to enter the part of Karabakh controlled by the Russian peacekeepers to investigate reports of the illegal mining. That blockage, however, was resolved after a matter of hours.

Azerbaijani officials said they had come to an agreement with the Russian peacekeepers to allow officials into the Russian-controlled sector of Karabakh to discuss environmental monitoring.

On December 10, a group of Azerbaijanis tried to visit one of the mines in Karabakh under dispute, but a group of local residents blocked them, the de facto authorities reported. In December 12 comments to the media, the press secretary of Azerbaijan’s foreign ministry, Aykhan Hajizade, blamed the Russian peacekeepers for not allowing the visit to happen and said that the ministry had sent a letter of protest to their Russian counterparts.

“The Azerbaijani side for the second time has closed the only highway linking Artsakh with Armenia and the world, by false and artificial pretenses,” said Karabakh’s de facto leader, Arayik Harutyunyan, in a statement. (Artsakh is an alternative Armenian name for the territory.) Harutyunyan said Baku’s aim appeared to be “inflaming internal tensions and panic in Artsakh.”

“This is yet another manifestation of Baku’s genocidal politics,” Karabakh’s de facto foreign ministry said in a statement. It was “aimed at intimidating the people of Artsakh, creating an atmosphere of instability in the region and hindering the work of the Russian peacekeeping mission.”

“This is a provocation, and how will the international community react? Who will react? Much will depend on this,” Davit Babayan, who until recently was Karabakh’s de facto foreign minister, wrote on his Telegram channel.

The pressure on the road came as Baku tries to push the Armenian government to sign a peace agreement to resolve the decades-long conflict between the two sides.

Also on December 12, Azerbaijan released documents that Baku had presented to the United Nations purporting to show that Armenian military forces had been using the road to transport land mines with which they were mining Azerbaijani territory.

While the two sides had both predicted that an agreement would be signed by the end of the year, they have since walked back those projections.

Azerbaijan is using the standoff to increase the stakes in the negotiating process, said Shujaat Ahmadzade, a political analyst in Baku. It would be “naive” to take the environmental concerns at face value, he wrote on Twitter.

Baku is challenging Russia while it is bogged down in Ukraine and while Moscow is increasingly dependent on Azerbaijan’s close ally, Turkey.

"Plus, there is a risk [to Russia] of losing Azerbaijan. A move against Azerbaijan could lead Baku to cooperate more closely with Euro-Atlantic actors. Long story short, today Russia's hands are tied in many directions. And Azerbaijan knows it well," Ahmadzade wrote. "Taking advantage of this tense situation, Azerbaijan has two main goals: First, sign a Western-backed peace treaty by neutralizing Russia; and second, simultaneously, extract maximum concessions from Russia on Karabakh and other issues."