Inflation continues to rise in Azerbaijan, and the government is again promising to increase salaries and pensions. 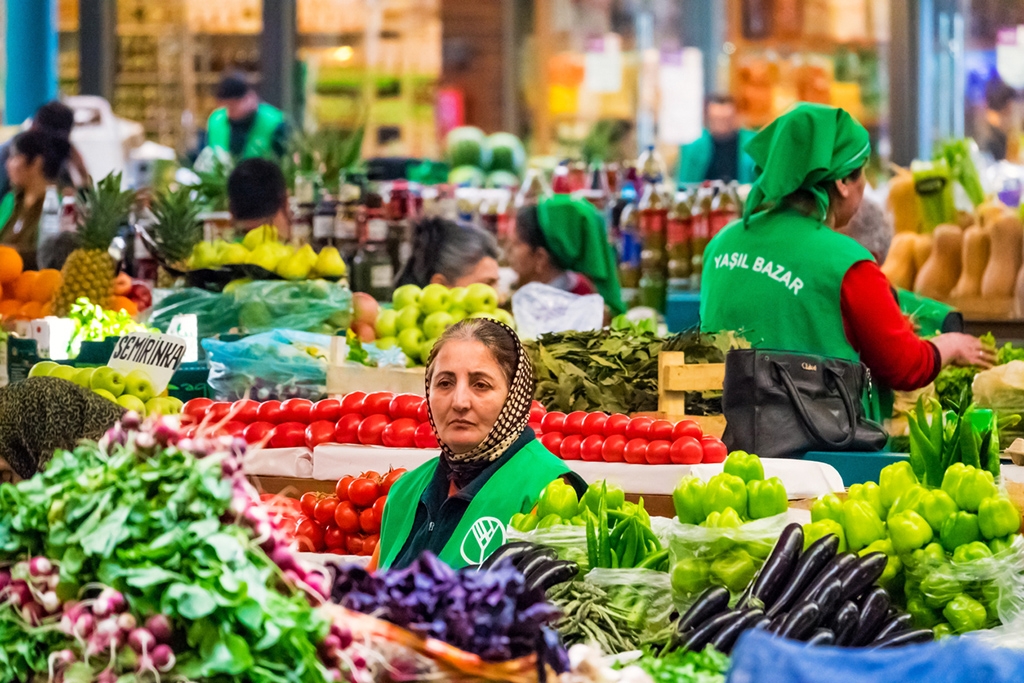 Azerbaijanis spend half of their income on food, official data show. (iStock/Getty)

Natavan Aghayeva, a 60-year-old homemaker in Baku, says that inflation has never been this painful in recent memory. “It’s affected everything, from sugar to fruits and vegetables – when your appetite wants something from the shop, the price tag and money in your pocket will make you think again,” she told Eurasianet.

As an ethnic Talish, Aghayeva likes making her people’s particular version of pilaf, along with Azerbaijani cuisine. But the price increases, which also have hit rice, have forced her to limit preparing traditional meals to special occasions.

She is not alone. Bakuvians surveyed by local media broadly lament the rising prices and the effects on their ability to make ends meet.

Prices on food, beverages, and cigarettes rose 2.6 percent in September compared to the month before, according to data from the State Statistics Committee. The prices were 10.4 percent higher than the previous September. Azerbaijanis spend half of their income on food, official data show.

Overall, inflation in the period January-September 2021 has reached 5.2 percent, compared to 2.9 percent in the same period of 2020.

The committee also tracks monthly changes in prices for 140 food items. Some have experienced especially strong inflation. Cooking oil, for example, was 40 percent more expensive in September compared to the same month the year before.

Those particular increases have a strong psychological impact on consumers, said economist Farid Mehralizadeh. “The fact that specific products that we consume a lot tend to have a larger inflation rate than overall makes people feel the impact of inflation even harsher,” Mehralizadeh told Eurasianet.

Food is not the only thing Azerbaijanis are spending more on these days. In July, the government increased the fees for natural gas to homes, doubling the price for moderate users and by 2.5 times for those who use more than 2,500 cubic meters of gas per month.

And starting on November 1, Azerbaijanis who use less than 1,200 cubic meters of gas will also see their costs go up, by 20 percent. Industrial and agricultural users will see a smaller increase, of 10 percent. Electricity prices for the trade and service sectors also are increasing by about 22 percent.

The Tariff Council, the body that determines prices on state-provided goods and services, justified the utility increases by saying they would “bolster the competitiveness of the economy,” guarantee energy security, and maximize the “efficient use of resources” while limiting subsidies from the state budget.

Some independent experts disagreed. The rising energy prices stem from a “lack of transparency” at SOCAR, the state oil company, economist Zohrab Ismayil told RFE/RL. “There is a mismanagement of expenditures and waste that results in rising utility prices,” he said.

Prices of petrol are going up, too: In mid-September the price for 95-octane fuel rose from 1.45 manats to 1.6 manats (85 to 95 cents) and for 98-octane, from 1.6 manats to 1.9 (95 cents to 1.12). That was the third such price increase this year alone. While these forms of petrol are imported from abroad, and not subject to Tariff Council control, the body did also raise prices on 92-octane petrol and diesel fuel earlier this year.

Those fuel price increases have contributed particularly to the inflation on food, as the cost of operating agricultural machinery has increased, Mehralizadeh said.

On top of all this, Azerbaijan’s parliament has begun discussing a new bill that would increase the fees of a wide variety of state services. Under the new legislation, for example, the price for getting a new passport would rise from 40 to 60 manats ($24 to $35) and for a driver’s license from 20 to 40 manats ($12 to $24).

The government has explained the fee increases as keeping up with inflation, but some are skeptical. There is no point in “paying 40-50 manats for documents while their real cost could be only 2 manats,” said Nazim Baydamirli, an economist and former member of parliament, in an interview with BBC Azerbaijani. "And if there is indeed an increase in the real cost, they should justify it to people.”

While inflation has bedeviled Azerbaijan for years, there are new causes to the current bout. “Pandemic-related restrictions around the world, including the loss and restriction of human labor resources, have made food prices rise” everywhere, Mehralizadeh said. And this especially affects Azerbaijan, where most food is imported, he said.

In 2019, Azerbaijan spent $1.7 billion on imported food, according to the State Statistics Committee. Mehralizadeh predicts that will rise to about $2 billion in 2021.

There is some consolation on the horizon for Azerbaijanis whose salary is paid by the government. In an October 16 decree, President Ilham Aliyev ordered the government to allocate money for an increase in salaries for state workers in the 2022 budget.

The increase should be between 20 and 40 percent, Deputy Minister of Labor and Social Protection of the Population Anar Karimov told the news agency APA. It will benefit about 1.8 million workers, he said.