Celebrations broke out around the country following the announcement that their historical capital in Karabakh had been captured – perhaps no more so than among the city’s former residents. 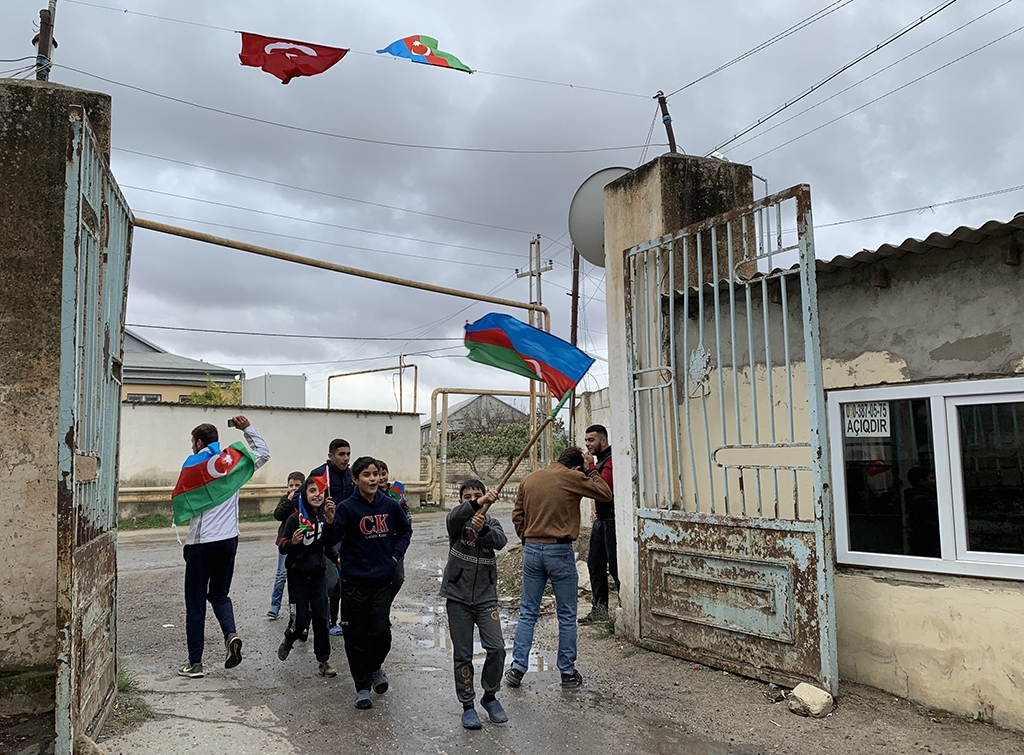 Children in the Pirsagi camp for people displaced from Shusha celebrate the announcement of the city's capture. (photo: Ulkar Natiqqizi)

Azerbaijanis are celebrating their government’s announcement that it had retaken Shusha, the city they regard as their historical and cultural center in Nagorno-Karabakh.

“We have been waiting for this news for so long,” said Nuriyya Akhundova, through tears. She fled Shusha in 1992, when she was 14-years-old, after Armenian forces took control of the city in the first war between the two sides as the Soviet Union was collapsing. She now lives in Pirsagi, a settlement for Azerbaijanis who were displaced by the war. “It has been my great dream to return back, I have lived with this longing for 28 years,” Akhundova told Eurasianet. “Thanks to God.”

President Ilham Aliyev announced the taking of Shusha, the center of Azerbaijani culture and history in Karabakh, in an address to the nation on the morning of November 8. “Giving this good news to the people of Azerbaijan on this historic day is perhaps one of the happiest days of my life,” Aliyev said in the address, which he delivered from Baku’s Alley of Martyrs, where the country’s war dead are buried. Dear Shusha, you are liberated! Dear Shusha, we are back! Dear Shusha we will revive you!”

Aliyev provided few details, and Armenian officials said that fighting was continuing in the city throughout the day.

But Azerbaijanis weren’t waiting for any more confirmation, and victory celebrations broke out across the country immediately following Aliyev’s announcement.

They were perhaps nowhere more enthusiastic than at Pirsagi, about 30 kilometers from the center of Baku, where about 90 percent of the population of the camp are internally displaced people (IDPs) from Shusha. They are among the more than 600,000 ethnic Azerbaijanis who fled their homes when Armenians took control of Nagorno-Karabakh and several districts surrounding the territory.

When the announcement came that Shusha had been taken, Pirsagi residents ran outside their apartments to the yards, hugging one another and crying. Some chanted, “Martyrs don’t die, the homeland is not divided.”

Once a youth camp run by Azerbaijan State Railways, Pirsagi was converted into an IDP center shortly after Armenian forces captured Shusha in May 1992. Since the latest war began on September 27, residents have been eagerly following the progress of the campaign. Several young men from the camp have died in the fighting; some had been drafted and others volunteered. Still others have been waiting for their turn to be called up.

Turkish flags hang alongside Azerbaijani, in celebration of Turkey’s heavy backing of Baku’s offensive. There are even some Pakistani flags, in thanks for Islamabad’s support, and signs adapting the traditional slogan of Azerbaijani-Turkish friendship: “one nation, three states.”

“I have never seen Shusha,” said 21-year-old Sadagat Ismayilzada, whose family fled the city before she was born. But her relatives inculcated a love for the city in her, she said. “I can’t even speak, I am so happy. I want to see where my parents lived, the schools which they went to.”

Shusha is only the latest of a steady stream of villages and towns that Azerbaijani forces have captured in the offensive. As news comes of each victory, former residents of the villages have rejoiced.

Hasan Huseynov, 68, is from the village of Valigulubayli in the Zangilan province. He now lives in the Lala IDP camp, just a short distance from Pirsagi, populated mostly by IDPs from the Zangilan and Jabrayil regions.

When Aliyev announced the retaking of Valigulubayli on October 22, “I stood up and kissed the TV,” Huseynov told Eurasianet. “If he says right now that civilians can go and see their lands, no matter how long it takes, I would walk.”

Many obstacles remain to the IDPs’ return, not least the fact that the war could be far from over. But even when the conditions become amenable to a return, it remains a question how many IDPs will want to return to their former homes after nearly 30 years away.

Kamala Guliyeva, a 50-year-old IDP from a village in the Fuzuli region, said she hopes to return – but part-time. “When we left, we didn’t think it would take 30 years to return,” she said. “We knew, even if sometimes we lost hope, that our lands would be liberated.”

She wants to go back. “I will go there barefoot if I have to, to remember my youth, and also my mother,” who died during the war and is buried in Karabakh. But she also has two grown children who have made their lives in Baku. “I can’t leave them,” she said.

But for the most part, practical concerns like this were left for the future.

Ismayil Allahyarov, another IDP from Shusha in Pirsagi, recalled his former home. “Such beautiful architectural buildings, the houses of beys and khans,” he said. “It is impossible to describe them in words. Not even an artist could paint that scene.”

Now, he said, “I feel like my heart is going to burst. I am going to go crazy from happiness.”