A new generation of Azerbaijanis is growing up with no firsthand memory of the land from which their parents were displaced, and which the government vows to take back. 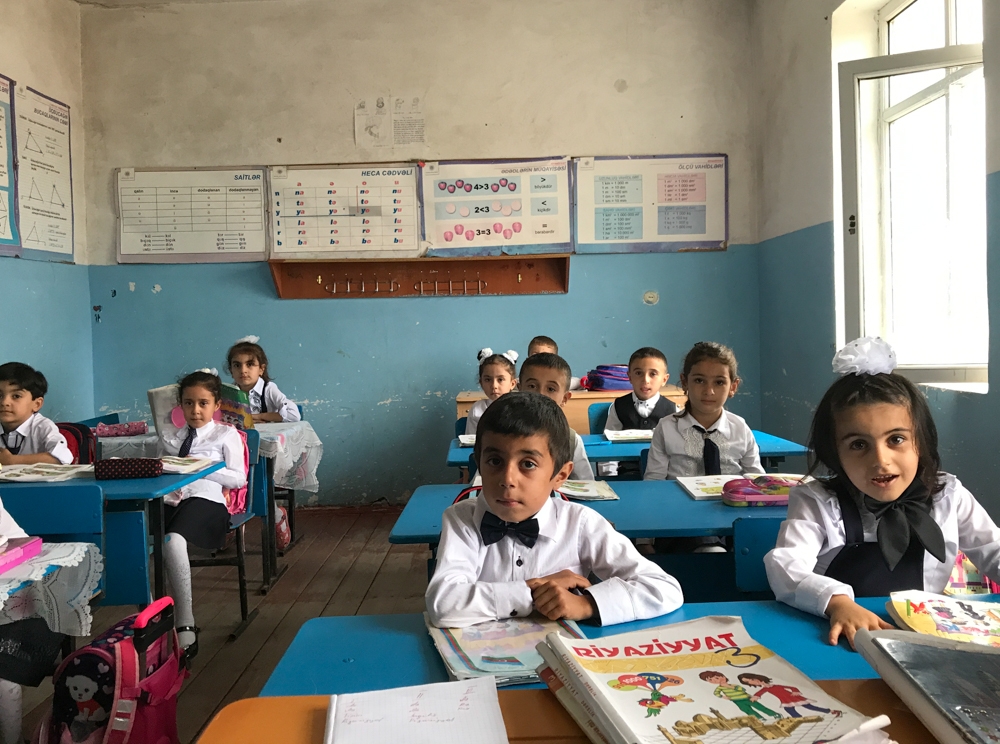 Children at a school for IDPs in Quzanli. (All photos Joshua Kucera)

Seven-year-old Ali walks into the room, and immediately an adult gives him a quick pop quiz.

“Where are you from?” Ali is asked.

Ali has never seen Kelbajar; it was taken by Armenian forces in 1993 and his parents, along with tens of thousands of other ethnic Azerbaijanis who had called the region home, were forced to flee. A quarter century later they remain displaced, some of the roughly 1 million Azerbaijanis displaced by the conflict. The 7 percent of Azerbaijanis registered as internally displaced people (IDPs) is one of the highest rates in the world.

Many of the IDPs are concentrated here in Barda, a district bordering the line of contact between Armenian and Azerbaijani forces, where an estimated half the population is displaced from the conflict. Ali’s father, Qismet Guliyev, is now the deputy director of the Kelbajar Region General Secondary School, an institution serving families displaced from Kelbajar. The school is dark and unwelcoming, unsurprising given that it is a repurposed jail. The Guliyev family lives in an apartment in the same building.

“What did Armenians do to us?” Ali is asked.

“They occupied our lands.”

“Do you want to go to Kelbajar?”

Even as the years stretch on with no resolution to the conflict in sight, many of the displaced harbor hopes of returning home. But in the 24 years since the ceasefire was signed, a new generation has grown up with no firsthand memory of the land their parents consider home. To older generations, that is a problem that needs to be solved.

“We teach all students to be proud of their land, although they've never seen their land,” Guliyev said. “We teach them how much land we lost, how many IDPs we have, how we can't go back there. So they are always ready to go back, they always feel like they are citizens of that land.”

Still, some parents worry that as the years pass, the new generation won’t feel the same attachment to their lost homes. “Our children don't know about this land,” said Mirzahan Mamedov, an IDP from Lachin who owns a car wash in Barda and is a father of three young children. “And if our generation doesn't take this land back, after we die, they will give it back to them [Armenians],” he said. 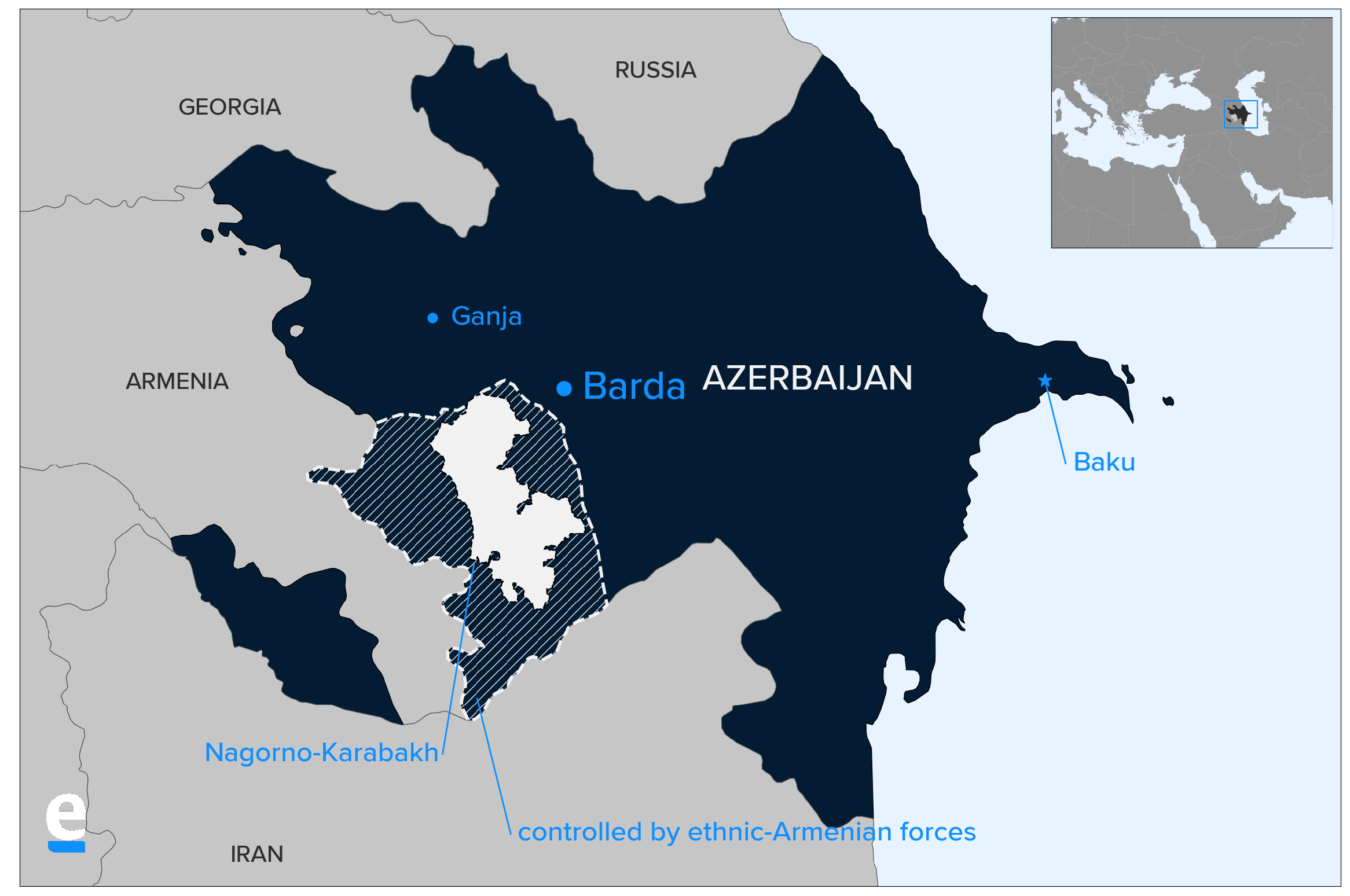 “Among the younger generation there are various opinions,” said Kerim Kerimli, an IDP from Shusha who runs an organization in Baku advocating for IDP rights. “They don't have the kinds of memories that I have. But there are still many of them who are drawn there. They see reports on the internet or on TV, stories from their parents. For example, my children know Shusha almost as well as I do, I've told them about it so many times. The majority of young people would like to go back. There's something like a genetic memory, it plays some kind of role.”

To combat any potential complacency, IDP children are constantly reminded of their former homes. These include once Azerbaijani-populated towns in Karabakh itself, such as Shusha, as well as the seven surrounding districts of Azerbaijan which are now occupied by Armenian forces.

Like the Kelbajar Region General Secondary School, many schools for IDPs are organized by the region from which the students’ families are displaced. Schools are permeated with reminders of Karabakh and the occupied territories: hallways are decorated with memorials to soldiers who died in the war, and classrooms have posters commemorating the names of the lost territories and the dates on which they were occupied by Armenians. Performative displays of knowledge like Ali’s are common.

Information about Karabakh and the occupied territories is infused throughout the curriculum starting in the first grade, said Ayten Abbasova, a teacher at a school near the town of Quzanli, the de facto capital of the Aghdam district since the city of Aghdam remains under the control of Armenian forces. In addition to memorizing facts about the lost territories, students are given assignments to research the lands from which their parents fled and write compositions about the 1992 massacre of Azerbaijani civilians in the Karabakh village of Khojaly, an event the authorities here commonly refer to as a “genocide.”

“By the fourth or fifth grade the children will know all the important dates, and if they don’t the other children will remind them,” Abbasova said. “We make them believe that someday we will go back.”

Outside of school, too, children are constantly reminded of their parents’ lost homes. “I’m always explaining to them, I tell them about Lachin all the time,” said Mamedov, the car wash owner. “My oldest son, if you ask him where he's from, he'll tell you 'I'm from Lachin.' And he already knows a lot about Lachin.” He even has a nephew named Lachin.

The social pressure works, for the most part, Mamedov said: “There are some families whose children say 'We don't care about Lachin,' but most children are raised in this culture, where older people tell them what to say, what to wear, how to behave, and they also know that this is our land, it belongs to us and no one can take it.”

(Armenians have a different perspective on the conflict: they typically use the term “liberated” territories, rather than “occupied.” And they see them either as a critical security bulwark against a potential Azerbaijani military attempt to retake Karabakh or, increasingly, an inherent part of Nagorno-Karabakh with an ancient Armenian history. About 150,000 Armenians live in Karabakh today, and population and resettlement of the occupied territories is small but growing.)

The government has spent substantially to ameliorate the poor living conditions of IDPs. Since 2010, the government has reported spending about $1.35 billion on housing for people displaced from the conflict, though a report from ifact.ge, a Tbilisi-based investigative news website, said that only a fraction of that money can be accounted for. Nevertheless, living conditions have been improving, and international officials estimate that so far about 280,000 of the IDPs have been provided with new housing.

One of the newest government-built settlements is on the outskirts of Terter, a district neighboring Barda that is even closer to the front lines. The settlement was opened in late 2017; it now houses 1,000 IDP families and the gleaming new school wouldn’t look out of place in an American suburb. The large school building contains nine separate schools, each for students from a particular region. “We’re very comfortable here,” said the director of the school for Kelbajar IDPs, Tofik Hadjiyev. “Still, our land, our homeland draws us, we want to go back there.”

In recent years the government also has thoroughly renovated the centers of the three regional capitals in the area – Barda, Terter, and Quzanli – with new state buildings, including the inevitable Heydar Aliyev museums dedicated to the former president, considered the father of post-Soviet Azerbaijan.

Regardless of the new development, people cling to memories of their former homes. Businesses have names commemorating the lost territories – Shusha Café, Lachin Construction. IDPs who learned that I had recently visited Karabakh and the occupied territories invariably peppered me with questions about what it was like there now, and raptly swiped through the photos on my phone.

Some IDPs say they feel like second-class citizens here. “We don't have any problem with local people, but in our heart, we don't feel comfortable here,” Mamedov said. Cars are registered by the owner’s home district, which in the case of IDPs is the territory from which they were displaced. They can thus easily be identified on the street, which causes some discomfort among IDPs, Mamedov said. “We hear that local people say: ‘Oh these IDPs, it would be better if they left, we need this land, they came and they occupied our places,’” he said. “We are here but this place belongs to the local people, not to us. We have to go back to our home.”

Most IDPs in the region give high marks to the government for its handling of their living situation. The more common complaint is about the government’s failure to take back their native land.

“If we're planning to go back to our lands, why are we building these new schools, new villages?” asked Habil Aliyev, a teacher at the Kelbajar Region General Secondary School. “Why are we spending this money here? If we are going to go back, why isn't the government spending its money there?”

“Every day on TV we see the government saying 'we will take it back, we will take it back,' but they never do anything,” said Elmir, a 28-year-old who was forced to flee his home village in the Aghdam region as a child and now runs a small shop in the village of Quzanli. “Mehriban Aliyeva [the president’s wife and the country’s vice president] has houses all over the world, and we don't have anything.”

Protests occasionally break out among IDPs demanding better living conditions or for the government to take stronger action in retaking Karabakh or the occupied territories. These are among the rare demonstrations tolerated by the Azerbaijani authorities, as IDPs have a moral authority that is difficult for the government to contest. “We can demand everything from the government,” said one IDP in Barda, Serdar Zeynalov. “We don’t have land, we have lived here for 25 years, and the state isn’t doing anything. And that’s a problem for the government – if all the refugees gather together, it would be something like an uprising. And they can’t allow that.”

An especially delicate issue for IDP parents and teachers is how to talk about the Armenians who now live in their former home territories. Just as they have never seen the homes from which their parents fled, many of the younger generation of IDPs have never met an Armenian.

“We teach them that not all Armenians are guilty. And that they have kids like you. We don't say that we won't be able to live together again. But I'm not sure. At most, maybe we can live like neighbors,” said Ayten Abbasova. She is from Kelbajar, where there was virtually no Armenian population before the war, but she went to university in Stepanakert where she lived with an Armenian family.

Historically, though, she said children are taught that Armenians are traditionally untrustworthy. “Sometimes we have a weak point that we always excuse them [Armenians],” she said. “We used to live together, but they were always breaking their agreements and that's why we had a war.”

“All the children see Armenians as the enemy, occupying our lands, and that's why we live in these kinds of poor conditions,” said Guliyev, the deputy director the school in Barda. “From ancient times, Armenians never had their own land and that’s why they try to occupy ours.”

In the middle of this conversation, Ali’s sister, 13-year-old Hecer, enters, and she gets her own quiz.

“Can we live together with Armenians?” she is asked.

“No, because they occupied our lands.”

“What do you think when you hear the word ‘Armenian?’”

“They destroyed our roots and committed genocide against us.”

“Would you like to go to school and study with Armenian kids?”

Joshua Kucera is the Turkey/Caucasus editor at Eurasianet, and author of The Bug Pit. Click here to read Kucera's earlier dispatch from Kelbajar.