As the foreign ministers of Armenia and Azerbaijan prepare to meet in Washington, among Azerbaijanis there is little desire to stop the fighting. 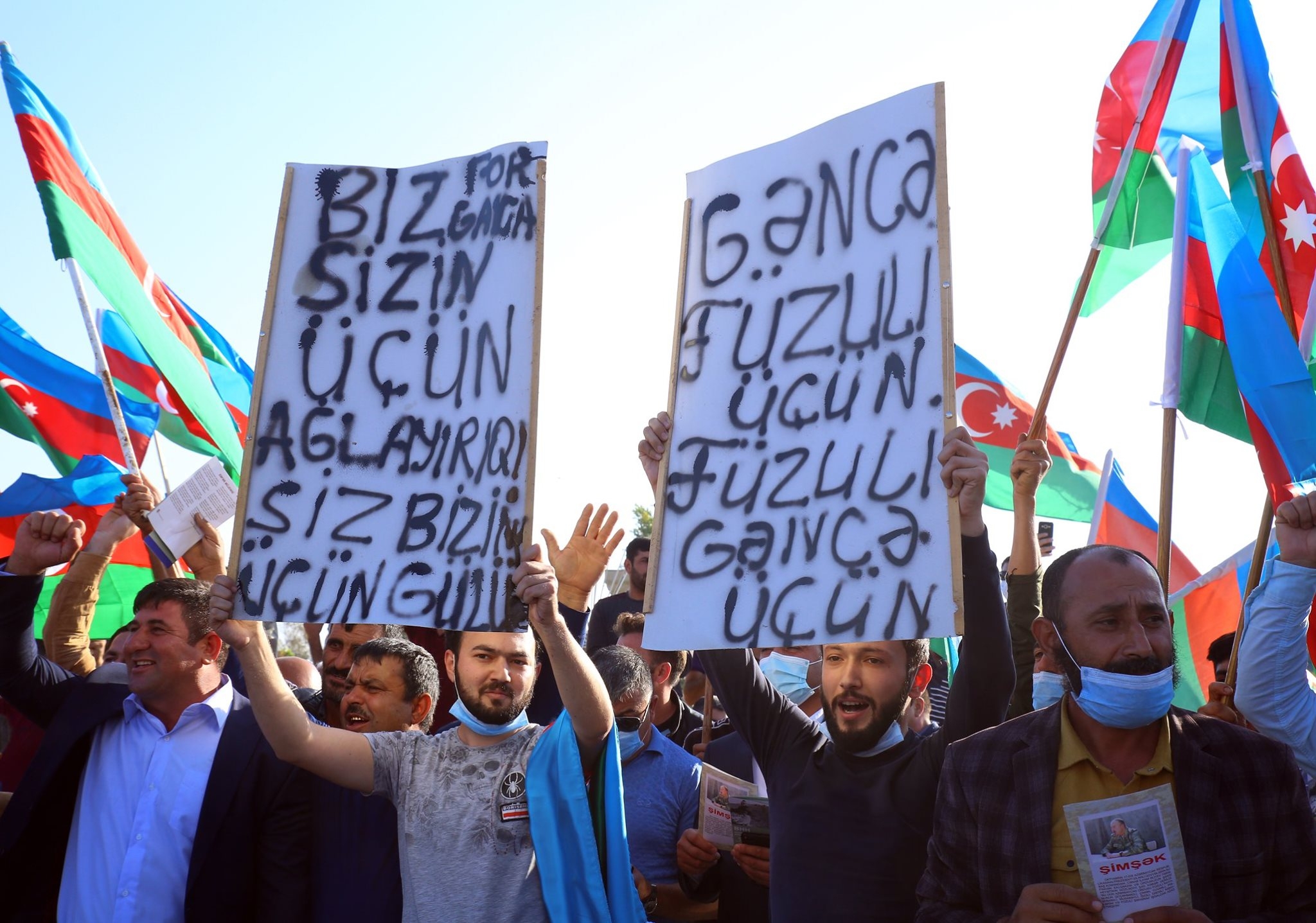 A rally on October 17 in support of Azerbaijan's offensive against Armenian forces. (photo: Ministry of Defense, Azerbaijan)

As Azerbaijan appears to be achieving unprecedented success on the battlefield, many Azerbaijanis are asking: why negotiate?

Amid the heavy fighting, diplomacy is continuing between Armenia and Azerbaijan: the sides have agreed to two humanitarian truces, though both quickly broke down.

The foreign ministers of the two countries have flown to Washington and are scheduled to meet with Secretary of State Mike Pompeo on October 23. That follows meetings earlier in the week with Russian Foreign Minister Sergey Lavrov. There have been suggestions that the two countries leaders’ may meet in Moscow.

But among many Azerbaijanis, there is no appetite for talking. After nearly three decades of fruitless negotiations, they see the ongoing offensive as the best chance to return the lands that were lost in the first war with Armenians, in the 1990s, which resulted in more than 600,000 Azerbaijanis being forced to flee.

“For 30 years Armenians were tricking us with peace negotiations while they were building tunnels and fortifications in the occupied territories at the same time,” said one 30-year-old Baku resident, speaking to Eurasianet (like all interviewees in this piece) on condition of anonymity. “They never intended to return our lands. We shouldn’t waste another day on negotiations.”

Added another twentysomething man: “We will sit at the negotiation table after we have liberated our lands – I mean every city and village. Otherwise, we will lose again.”

Public enthusiasm for the war has been high since fighting started on September 27. Regular claims that new settlements have been recaptured have been received eagerly.

So when the first news of any sort of negotiation broke – Russian-mediated talks over the first humanitarian truce, announced on October 9 and agreed the next day – there was a significant public outcry.

“There is no other way to put an end to Armenian occupation in Karabakh. This issue won’t be solved without fighting,” Ismayilova wrote in a Facebook post ahead of the negotiations. “The problem is that we don’t have a head of state who can say ‘no’ when Moscow pulls a string.”

Opposition activist Bakhtiyar Hajiyev wrote, following the announcement of that ceasefire, that Azerbaijan’s government needed to clarify that the it would only be temporary.

“The president must understand that if a long-term ceasefire and negotiations will last forever … he will lose his popularity and there will be great risk to his political rule,” he wrote on Facebook. “Armenians will not give back at the negotiation table the lands that they didn’t give back in by force.”

A similar social media objection arose to news that Aliyev had said, in principle, that he would be willing to meet Armenian Prime Minister Nikol Pashinyan.

“Assumptions are made about the Azerbaijani president’s meeting with the Armenian prime minister in Moscow. Let’s not jump to conclusions,” independent MP Erkin Gadirli wrote on his Facebook page on October 21.

“Having said that, let me state my own assumption,” Gadirli continued. “The head of state, commander-in-chief of the country that is at war shouldn’t leave the borders of his state.”

“Stopping the war would mean that the death of our soldiers was in vain,” another Bakuvian told Eurasianet.

Rare voices calling for peace, meanwhile, are finding little appetite for their calls in Baku. The handful of activists who signed a joint anti-war petition with Armenians have been threatened on social media and, in some cases, detained or questioned by police.