Labor migrants are attempting to leave Russia as their jobs have been hit by sanctions. But they can’t cross the border into Azerbaijan, which has remained closed since the beginning of the pandemic. 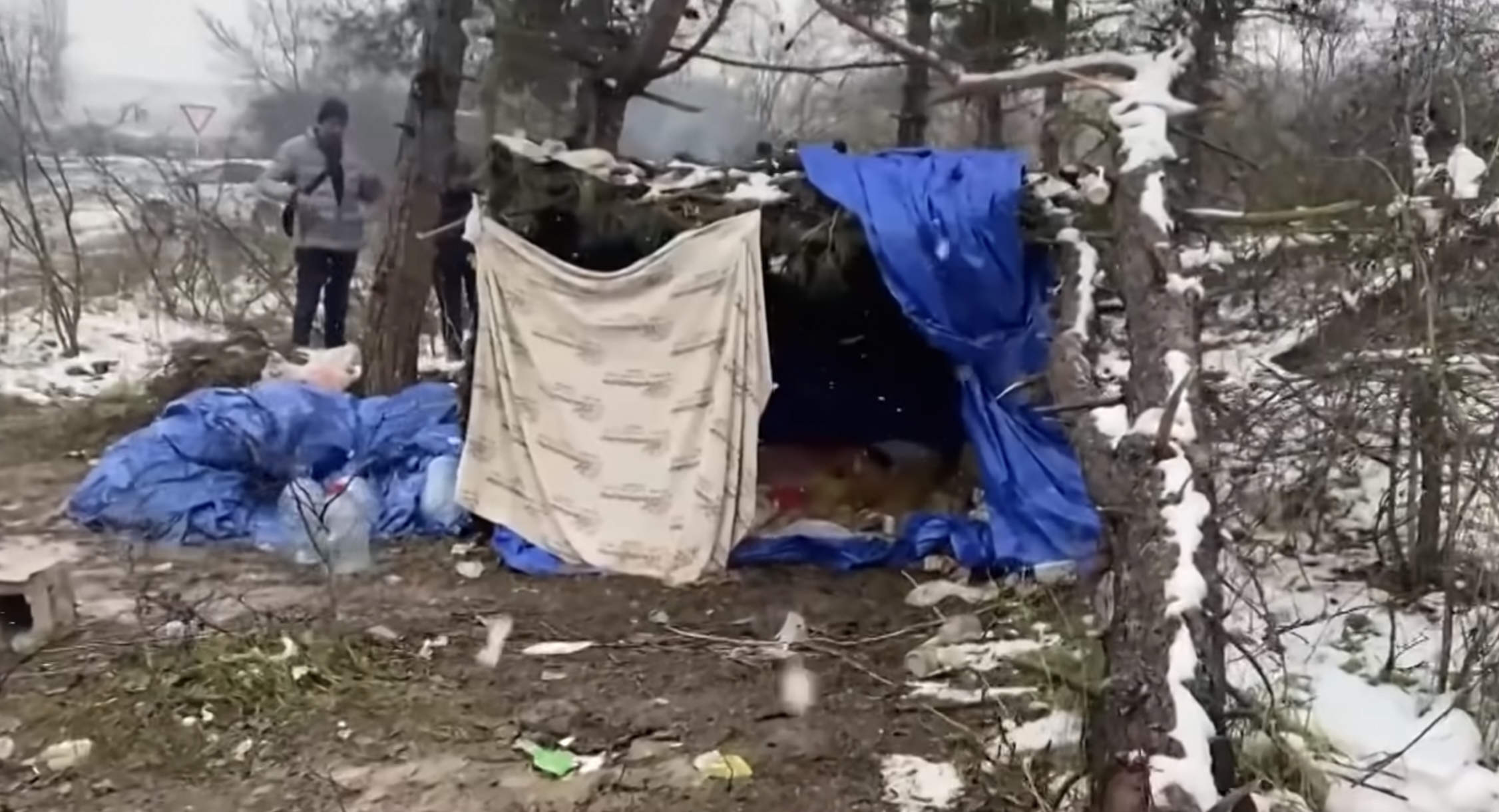 Screenshot of an RFE/RL report from a camp in Dagestan currently hosting hundreds of Azerbaijanis unable to return home because their country's land border remains closed.

Hundreds of Azerbaijanis are stuck on the Russia-Azerbaijan border, some of them forced to sleep outside in the snow, as they try to return home to escape the fallout from the Russian invasion of Ukraine.

Nearly all of Azerbaijan’s land borders remain closed two years after the start of the COVID pandemic, even as all of its neighbors have reopened theirs. That, combined with restrictions on flights between the two countries, is now complicating the efforts of Azerbaijanis living in Russia, including labor migrants and students, to return back home amid a collapsing Russian economy.

Videos of Azerbaijanis stuck at the Russia-Azerbaijan border have been circulating on social media and local media for several days. On March 14, RFE/RL reported that around 700 Azerbaijani citizens were gathered near the border in Dagestan. One of them, Rovshan Novruzov, said that Azerbaijanis were told by Russian border guards that they “can let everyone out, but Azerbaijani guards won’t let you in.”

Many have been reportedly staying at a children’s camp, “Ogonyok,” close to the border. Azerbaijani news outlet Qafqazinfo, in a March 16 piece, quoted the Azerbaijanis stuck there saying that the number of those at the camp was now more than 1,000. “Among them are toddlers, elderly people, sick people. […] All of us are stuck here, not able to go home,” a group of them wrote in a message to Qafqazinfo.

The land border between Azerbaijan and Russia was closed on March 18, 2020, in response to the spread of COVID-19 in the region. Since then, Azerbaijan has not opened its borders with Russia (or with Iran and Georgia), except to truck drivers, continuing to cite the epidemiological situation. Azerbaijan’s only open land border is the 13-kilometer slice between Turkey and Azerbaijan’s exclave of Nakhchivan. (The border with Armenia has been closed for more than 30 years as a result of the ongoing conflict.)

As capacity at “Ogonyok” is limited, latecomers have been forced to stay outside in the woods, as documented in a March 16 video sent to local news outlet Meydan TV.

Not all of the would-be returnees had been living in Russia. Some have escaped the war in Ukraine by crossing into Russia and then the hundreds of miles to Dagestan, only to be stopped at the Azerbaijani border.

Marina Sulopova told Meydan TV that her family left Ukraine after the start of Russia’s “special operation” there and ended up at the border, where they are running out of food and haven’t been allowed to use the toilet. “We go under the bridge for our toilet needs. We ask for food from truck drivers. We just sit and think about why they don’t let us in,” she said.

It has been cold and snowing in the area, Ogonyok has no electricity, and the food provided there is “low quality,” those staying there have reported. In a March 19 report on RFE/RL, one man there said that some intended to start a hunger strike in protest. “We will sit right in front of the door at customs. Let the snow freeze us. God willing, one day [President] Ilham Aliyev will order coffins for us so we will be taken from here,” he said.

The plight of those stuck at the border has been discussed in the government, but so far without any resolution.

On March 15, at a discussion in parliament of the annual report of the Cabinet of Ministers, member of parliament Razi Nurullayev brought up the issue. “Hundreds of our compatriots are living in tent shelters at the Russia-Azerbaijan border in difficult conditions,” Nurullayev said, asking Prime Minister Ali Asadov, who was at the session, to resolve the issue.

Asadov, in response, argued that while many COVID-19 restrictions are being lifted, the continued closure of the border was warranted by the fact that the pandemic had not disappeared. “The case of Azerbaijanis staying at the Dagestan border is under the government’s attention, but there is no final decision yet,” he said.

Asadov suggested that those stuck at the border could fly. Flights between the two countries were suspended on March 6, when Azerbaijan’s flag carrier AZAL stopped flights citing complications in international aviation insurance due to the sanctions imposed on Russia. Russia’s Aeroflot resumed flights between Moscow and Baku on March 21, but AZAL flights remain suspended.

But it remains unclear if Azerbaijanis stuck in Dagestan, only a short distance from home, will be able to travel all the way to Moscow to catch a flight to Baku. One man in Meydan’s video argued that “it’s too late, people have already gathered here.”

The situation at the border recalls a similar issue when it was first closed two years ago, and Azerbaijani labor migrants were trying to return home after they lost their jobs as a result of the lockdowns at the time. Then, too, hundreds languished at the border, staging a protest that resulted in a crackdown by Russian police. Eventually they were let in through the border, in small groups and following long delays.