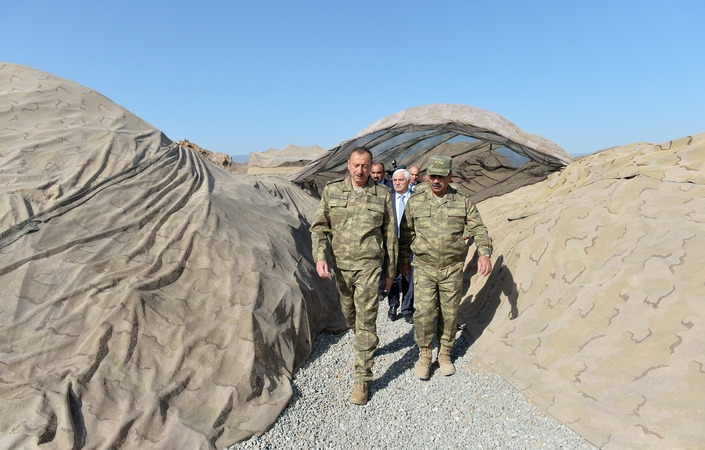 Azerbaijani President Ilham Aliyev made a morale-raising visit to troops along the front lines of fighting with Armenia, escalating the rhetoric around the recent conflict even while the shooting appears to have died down.

On Wednesday, Aliyev visited troops near the Aghdam region (which overeager Azerbaijani media had reported that its forces had already won back) and, in a military uniform, delivered a stemwinder of a speech, which he the next day summarized on twitter.

"We are not living in peace, we are living in a state of war. Everyone must know this," he said. "The war is not over. Only the first stage of it is. But the second stage may start too."

He also seemed to support the theory that the uptick in fighting was intended to sharpen international attention on the conflict. "Azerbaijani citizens are not pleased with the activity of mediators because the main mission of mediators is to settle the conflict, not to keep it in a frozen state and conduct confidence building measures," he said. "The Azerbaijani army is showing its strength, which is having an impact on the talks... If the Azerbaijani army starts an offensive, the enemy will find itself in a very difficult situation. This is known to us, the enemy and the mediators. Therefore, I believe that the developments of recent days will prompt mediators to take some action."

Nevertheless, fighting appears to have died down and Aliyev is scheduled to meet with his Armenian counterpart Serzh Sargsyan in Sochi, Russia, on Friday and Saturday.

In his frontline speech, Aliyev called Sargsyan a "fascist": "Today, the fascist leadership, the military junta of Armenia is leading its country into the abyss. They occupied our lands, but at the same time they have occupied the entire Armenia. Armenian people should get rid of the criminal and corrupt leadership."

Even in an atmosphere of increasing political repression in Azerbaijan, the recent fighting has to some degree united Azeris around the flag. In an interview with newspaper Yeni Musavat (via BBC Monitoring), opposition politician Panah Huseyn said that this was not the time for internal division:

"It is obvious that the current status quo will not persist. The Azerbaijani public no longer wishes to tolerate a continued occupation of the territories," he said.

Panah Huseyn said that many former soldiers have asked to join the army. "To be frank, this is the first such moment in the past 20 years when patriotism and fighting spirit are this high," he said. According to him, hundreds of thousands of people are ready to rally, without waiting for the government to sanction this.

"This wish of the people [to liberate Karabakh and adjacent Azerbaijani districts] must be imparted to the entire world, including the political forces in Azerbaijan. I believe that if there is such a call, then hundreds of thousands of people will answer it," the politician said.

He said there must be no domestic strife when fighting an external enemy and cited a recent call for unity made by Isa Qambar, the chairman of the major opposition Musavat party. "At this juncture there is a need for national reconciliation in Azerbaijani society. This brings about a unique chance. Of course, the authorities are responsible for 90 out of 100 practical steps to be taken on this matter. The authorities can do this... The Azerbaijani political opposition realizes its responsibility concerning this matter. The absolute majority of the opposition is of this opinion and what we demand that the authorities take advantage of this situation," Huseyn said.

He said Azerbaijanis closely followed events in Ukraine and drew parallels with it. "Part of Ukrainian territory is effectively under occupation and operations are waged against this occupation using all means. The international community does not oppose this. On the contrary, they endorse ! these operations. This situation gives us grounds to liberate our lands that were occupied in a more explicit way than they were in Ukraine. Because the Armenian army occupied our territory," Panah Huseyn told Yeni Musavat.

It's not the kind of atmosphere that encourages compromise. We'll see what comes out of the Sochi meetings.