Baku has a new park, the result of one of the most hotly disputed gentrification efforts of the post-Soviet period. But even critics say it provides much-needed green space. 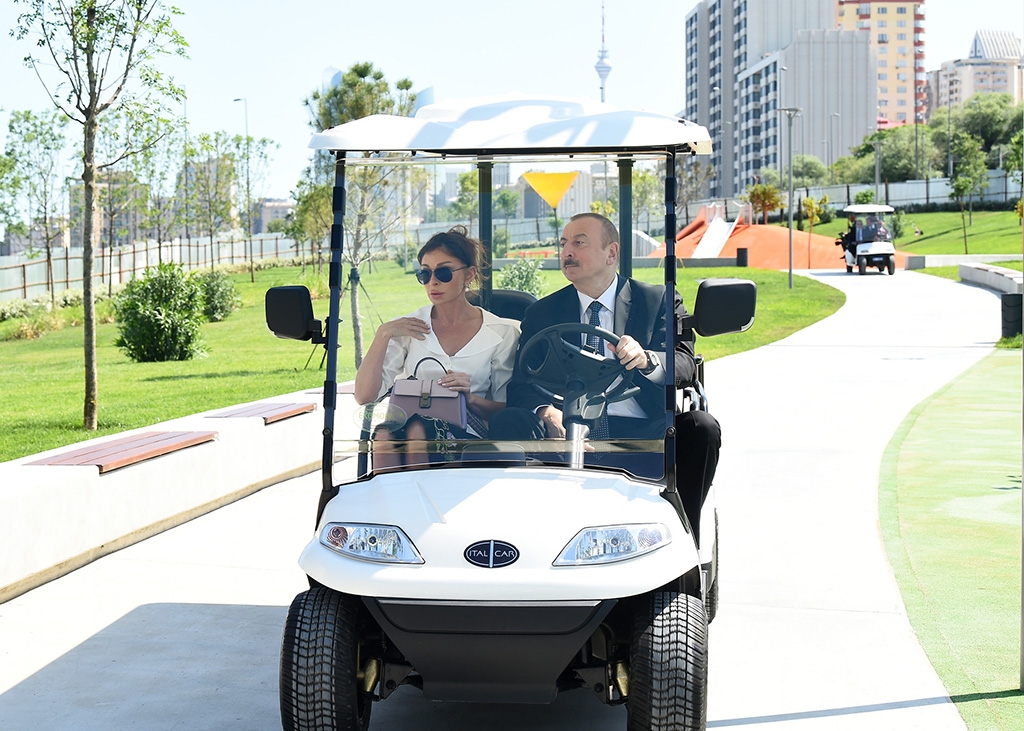 The Aliyevs go for a drive (President.az)

The first stage of Baku’s expansive and widely debated Central Park project has been opened to the public after nearly six years of construction, with a May 22 ceremony attended by President Ilham Aliyev.

The new park was built on the site of a former traditional mahalle neighborhood – incongruously named “Sovietski” – of single-story houses and narrow streets. The razing of that neighborhood for the new park was subject to heavy criticism from residents and urban activists. But the result – the first step in what will eventually be a 40-hectare swath of green space in the center of Azerbaijan’s capital – has been welcomed with pleasant surprise by some of the project’s critics.

The new park is “one of the most dramatic changes to the urban form of central Baku since the redevelopment of the seaside ‘boulevard’” built over the course of the 20th century, wrote two scholars, Anar Valiyev and Lucy Wallwork, in a recent academic article examining the development.

The razed Sovietski neighborhood was the oldest and most historic part of the city other than the UNESCO-listed old walled city, Icheri Sheher. A 2001 list of “Immovable Historical and Cultural Monuments Under the Protection of Azerbaijan” identified nearly 200 homes, four mosques, one church, and several administrative buildings within Sovietski. One mosque on the protected list, Haji Javad, was torn down in 2017 under the cover of night after worshippers protested.

Residents also objected that they were not fairly compensated for losing their homes, in occasionally large-scale demonstrations. The government was offering 1,500 manats per square meter (about $1,900 at the time), while residents argued the fair rate would be 4,000 to 5,000 manats.

And as the development progressed, many Bakuvians expressed concerns that the park would mimic other, poorly received park projects that were heavy on marble and stone and low on green space. One early model, produced by the Azerbaijan Automobile Roads State Agency, depicted a design centered around a concrete strip with minimal greenery. In 2017, lawyer and activist Aslan Ismayilov released a video expressing concern over the design and the potential lack of green area. “I’m asking the authorities to make it look like a real park. We don’t need marble and decorative trees,” he said.

Overall, the project has been seen as a part of the government’s overall strategy to sanitize the most visible parts of the city in an effort to create a sort of Dubai on the Caspian. “Baku’s public realm is being concentrated less and less around the curving narrow streets of ‘mahalle’ districts and increasingly around sterilized public spaces that aim to eliminate the supposed chaos of traditional districts,” Valiyev and Wallwork wrote. “This has both symbolic and exclusionary effects – creating ‘showcase’ city center spaces and ‘cleansing’ central districts of low-income residents.”

The final design appears to have taken some criticisms into consideration. The first part of the park, spreading over 14 hectares, features 2,100 trees and 137,000 shrubs and flowers, according to an announcement of the opening on Aliyev’s website. The park also features two cafes and a number of other gathering areas and has quickly proven popular with families, who have poured in, particularly on weekends, since its opening.

After the grand opening, there were reports of a new project to preserve and redevelop a portion of the Sovietski neighborhood, creating a new low-rise district with an eye toward saving the area’s architectural history, again suggesting a sensitivity to public discontent over the demolitions.

Leyla Musayeva, an architect at the local firm Pilla, which describes itself as “an alternative local platform which examines critical architectural and urban problems and seeks optimal solutions,” praised the park’s design and its success in creating a natural ambience. “Now, we can finally see the future of natural park planning in Baku,” she told Eurasianet.

Nevertheless, Musayeva said some of the demolitions in Sovietski were regrettable, in particular the destruction of the city’s cultural heritage and the loss of the “strong community” the traditional neighborhood provided. “The connection between the city and the big picture is often forgotten,” she said.

Another architect at Pilla, Muslim Imranli, said that while more green space in Baku is to be welcomed, “destroying the Sovietski area in this way cannot be justified by any project. Sovietski is part of the fabric of Baku’s city history.” Imranli also was skeptical of the reports of the new development of low-rise buildings, saying that it appeared to be oriented towards luxury apartments. “This can result in social segregation. Areas like this should not be treated superficially,” he said.

Saleh Nasirov, a blogger known for his criticism of social issues, said the government appeared to take people’s concerns into the design. “This time it was done properly for sure. It was beyond my expectations,” he told Eurasianet. “Nothing like this has been done in Baku before. It’s similar to projects like those in Western Europe.”