Observers have offered a variety of interpretations for what happened, but most agree: The outcome has damaged the government. 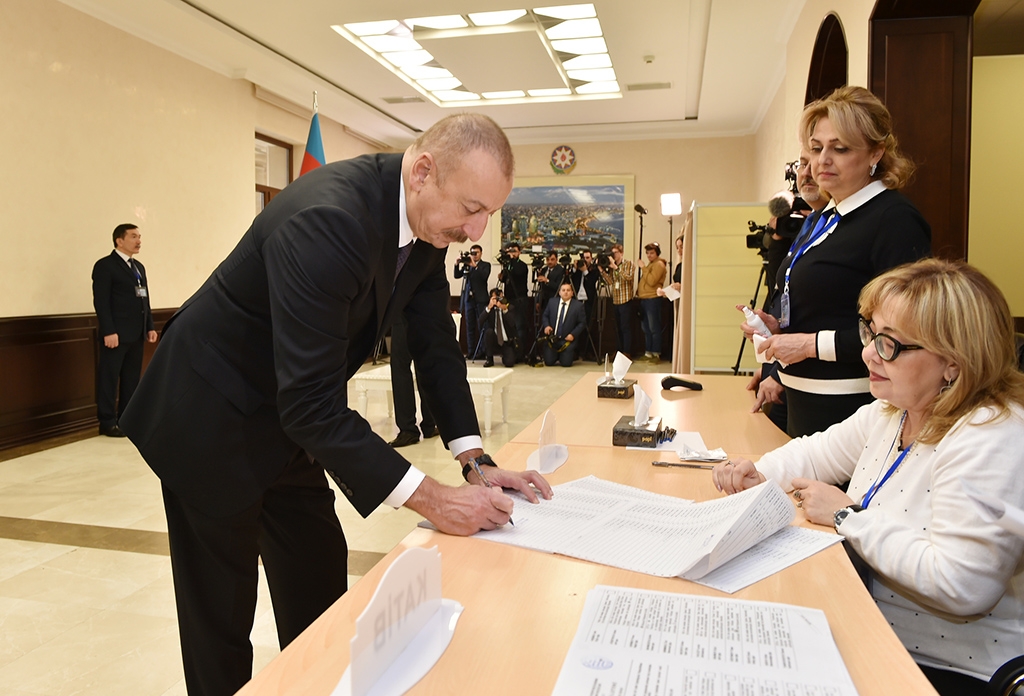 President Ilham Aliyev registering at a polling station in Baku on February 9. (president.az)

It’s been more than two weeks since Azerbaijan’s snap election ended in a debacle, with expectations of an unprecedentedly free vote dashed by the usual falsifications and harsh crackdowns on the resulting protests. And Azerbaijanis are still searching for answers about the point of the whole episode and what it means for the country’s political future.

Was it the result of infighting between dueling factions within the government? Good intentions that were poorly implemented? The government’s hubris that it could manage the PR fallout from a stolen election?

Azerbaijan’s opaque governing structure makes it impossible to do much more than guess, and knowledgeable observers have been coming out with widely varying interpretations of what happened.

Elections in Azerbaijan tend to be fairly predictable affairs, with little analysis needed. President Ilham Aliyev and his New Azerbaijan Party keep an iron grip on power through fraudulent votes; international observers have never deemed an election in the country to be free and fair.

This time, though, authorities unexpectedly raised expectations, publicly framing the snap parliamentary elections – they had originally been scheduled for November 2020 but then were moved up to February – as part of a “reform” agenda. Privately, they hinted that genuinely independent candidates would be allowed to win. They invested heavily in international PR efforts to portray the election as a new step in the country’s development.

But in the end, the February 9 vote saw the same sort of crude manipulations that have come to characterize the country’s elections for decades, and the changes in parliament were negligible. The buildup made the letdown all the more harsh, and the clumsy handling of it all seems only to have backfired on the government.

“The government created the impression that the election would be a step forward, a change in governance by bringing new people in” but the result makes the entire exercise “a lost opportunity, a bad thing for the image of the country,” said one Baku-based analyst who spoke to Eurasianet on condition of anonymity.

“The government’s biggest mistake was its pre-election messaging to the public,” said analyst Arastun Orujlu in an interview with the independent news agency Turan. “It would have been better if they had just left everything as it had been in previous elections.”

Orujlu, like many observers, suggested that the reason for the debacle was a power struggle between factions in the ruling elite. One of these groups, centered around figures close to first lady and Vice President Mehriban Aliyeva, “calls the plans they want to implement ‘reforms,’” Orujlu said. That faction set the high expectations for the vote, but they were ultimately outmaneuvered by an old guard that remains dominant. “The New Azerbaijan Party is a very effective tool, strongly structured and firmly in control of the other faction,” he said.

A variation on this theory was offered by Azerbaijani analyst Shahin Rzayev, writing on the website JAM News. He suggested that while the central government wanted a freer vote, the local officials who actually managed the election on the ground were not ready for change and, driven by their own instinct for self-preservation, carried out the usual manipulations. “After all, it is easier for an old-style official to get along and find common ground with ‘their own kind’ than with new ‘reformers’ that are still incomprehensible to them,” Rzayev wrote.

Another analyst, Anar Mammadli, disagreed, arguing that no one intended for the elections to be freer, but that they were rather designed to catch the opposition unprepared. If the opposition had had until November to get ready for the election, he argued, they might have posed a formidable challenge to the pro-government candidates. In this telling, the election results were a success, except that the opposition and independent civil society groups did mobilize enough to expose various vote-rigging schemes via social media.

While this may be a short-term victory for the government, in the medium term its legitimacy has been undermined by the botched vote.

“It’s going to be a difficult period for the government now,” Mammadli told Eurasianet.

An entirely different theory was posited by Audrey Altstadt, one of the U.S.’s leading scholars on Azerbaijani politics. In a recent analysis she suggested that the government deliberately raised hopes in order to discredit the opposition and demoralize them when the results turned out as usual. “They got one seat for their trouble and looked foolish,” she wrote. (One nominally opposition candidate, Erkin Gadirli of the ReAl Party, was elected. But his election, too, has been surrounded by controversy and most observers don’t expect him to be a significant presence in the parliament.)

Meanwhile, after a heavy publicity blitz ahead of the elections, Azerbaijan’s pro-government media and its PR efforts in foreign media have gone conspicuously quiet.

One Westerner who has met with several Azerbaijani government officials since the election said they had noticeably avoided the topic.

“In all my meetings, no Azeri official raised the issue of the elections. No spin – completely ignored,” the person said, speaking to Eurasianet on condition of anonymity. “They know how bad it looks.”