Azerbaijan’s Formula One: Engines Rev Up, Air Quality Goes Down 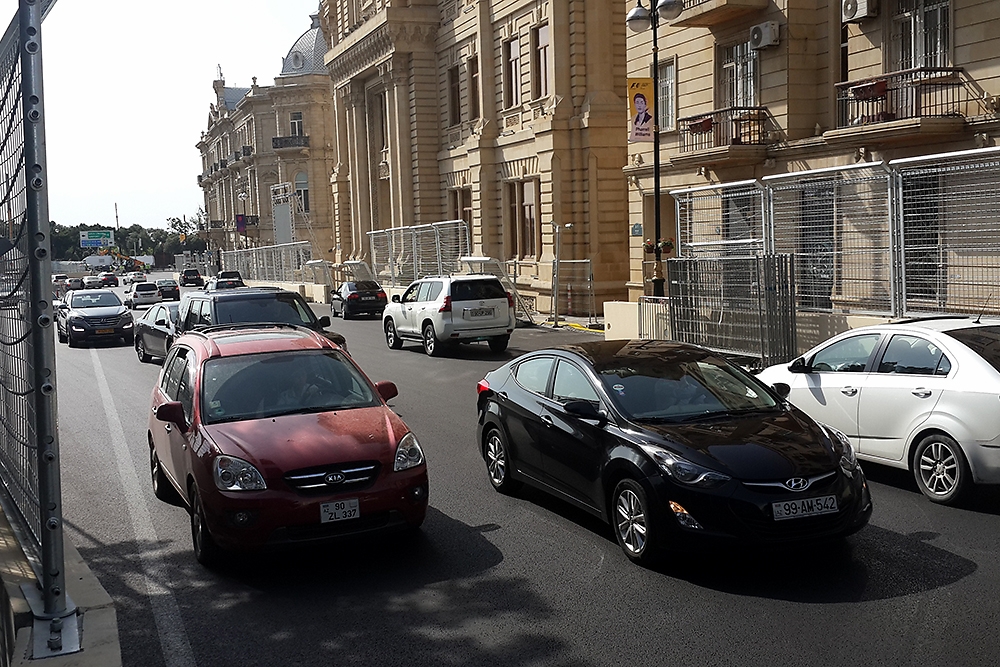 Baku vehicular traffic gets squeezed together on June 10 in the city’s center, where temporary barricades mark off the Formula 1 racing circuit for the June 19 Grand Prix. (Photo: Vusala Alibayli)

The upcoming June 17-19 Formula One race in Azerbaijan’s capital, Baku, may be another image-booster for the Caspian Sea country’s government. But for many city residents, the race is associated with potential hassles, including persistent gridlock and air pollution.

Even without the race, traffic is becoming a big problem in Baku. As energy wealth rolled into Azerbaijan since the start of the century, private car ownership has increased by 3.3 times to over 1million vehicles, according to government data. Baku, the country’s main job market, accounts for more than 57 percent of that number.

As a result, traffic jams in this city of some 2.2 million people have proliferated, along with air-quality problems.

Local and international researchers claim that, despite government efforts to address the issue, air pollution ranks among Azerbaijan’s most serious environmental problems.

According to data from the Ministry of Ecology and Natural Resources, auto pollution nearly doubled from 2005-2014. Baku alone makes up 62 percent of that amount. The level of emissions in Baku exceeds by fivefold that of the second highest polluter, the central city of Ganja.

Against that backdrop, many Baku residents wonder what the Formula One race will do for traffic in the city and the air.

The government already has prepared a list of closed streets and alternative roads. The closures will be in effect from June 14-21. Three downtown zones bordering on the Caspian Sea, including Baku’s main Neftchiler Avenue and the Old City, have been closed. Traffic will be diverted to a grid immediately behind this area. Parking there will be prohibited.

Economist Natig Jafarli, the executive secretary of the opposition Real movement, thinks the event will cause severe traffic gridlock. While describing the race as “good for promotion of the country,” he predicted that “[T]he already crowded roads, at least in the central part of the city, for at least one week, will be almost paralyzed.”

But Rauf Mirgulamov, a spokesperson for the Transportation Agency, is not concerned. He estimates that traffic has been moving 30 to 40 percent more freely in downtown Baku since 2012, when the Baku City Intelligent Transportation Operation Management System, which monitors traffic and manages traffic lights, was created.

“In general, there are not any traffic jams in Baku,” he claimed. “There are only crowds [of cars] and [traffic] density.”

He blames drivers who park in streets rather than in parking lots, taking up half of the road, for creating “artificial density.”

Mirgulamov’s assertions are contradicted by a March 2016 poll by the Business Insight International Research Group. That poll found that 40 percent of 640 surveyed Baku residents identified traffic jams as the city’s main problem.

Very often, photos and videos of Baku’s traffic jams are shared on social networks. Some examples feature traffic jams which lasted hours and were more than a kilometer long.

Tural Yusifov, who hosts a radio show about transportation, regularly posts about road problems on YouTube. In one video, he noted that, despite a light having turned green four times, his car had not budged.

The official site for the Formula One race does not mention such concerns or include any outreach information about air quality. The government, which still uses Soviet-era standards for air quality, considers the level of transportation emissions satisfactory.

According to official data, diseases with potential links to air pollution – heart disease, cancers and respiratory problems, ranked among Azerbaijan’s top three causes of death in 2014.

“There is a terrible shortage of personnel in the field of ecology in Azerbaijan. We need people who know what particulate matter [PM] is, [and] how and why it is significant to measure them,” she stated. Soviet standards for pollution did not include particulate matter, which can include minute acid or chemical particles as well as liquid droplets.

The Ecology Ministry’s Matanat Avazova, deputy director of the National Environmental Monitoring Department, reports that a month ago the ministry installed equipment that measures particulate matter in Baku every 10 minutes.

“In a month, it recorded small amounts of PM,” which “do not exceed the sanitary norm,” she said, without elaboration. Measurements will be taken for five years, after which “we can analyze the situation,” she added.

Avazova concedes, however, that Azerbaijan’s pollution-monitoring technology is old. “Our standards are about 60 years old,” she said. “We have already started to change them.”

The government already has taken some steps to improve Baku’s air quality, such as reducing the number of public buses (by replacing medium-sized buses with larger ones) and making use of the Intelligent Transportation Management System.

The government also has mandated the European Union’s strict Euro 4 emission standards for passenger vehicles, and banned the further import of non-compliant vehicles. The restrictions do not extend to cars already in the country.

Mehdizadeh acknowledges that the government has tried to manage transportation and protect the environment, but believes Baku needs more. “More metro stations, the development of the railway, introducing eco-buses, and complete implementation of Euro 4 – these steps are crucial for Baku,” Mehdizadeh said.