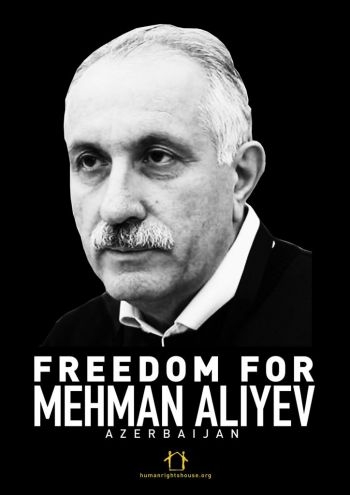 A campaign poster by the Human Rights House Network calling attention to the arrest of Mehman Aliyev, the director of Azerbaijan's only independent media outlet.

The director of Azerbaijan's Turan Information Agency was arrested and ordered detained for three months as part of an ongoing investigation into alleged tax evasion and abuse of power by the country's only independent news agency. As a result the agency said it is suspending operations as of September 1.

The arrest follows owner and director Mehman Aliyev’s August 18 announcement that Azerbaijan’s tax authorities had frozen Turan’s bank account as part of a criminal probe launched against the media company earlier in the month.

Human rights groups have raised concern about the legitimacy of the charges and point to the Azerbaijani government’s broad crackdown on independent media and civil society.

“The authorities are stepping up the pressure on Turan because they have been unable to force it to cooperate,” said Johann Bihr, the head of the Eastern Europe and Central Asia desk of Reporters Without Borders. “Mehman Aliyev is one of journalism’s pioneers in Azerbaijan. His only crime is to have headed the country’s last independent media outlet. We demand his immediate released and the withdrawal of all the politically motivated charges against Turan” he said.

The secretary general of the Council of Europe, Thorbjørn Jagland, said the arrest was a violation of an agreement that Azerbaijan had made with the body “to soften the punishment system and avoid unnecessarily harsh sentences and detentions whenever possible – for instance, in cases when the person who is detained does not threaten the security of the state or its citizens.”

Turan was founded by a group of journalists in May 1990 and was one of the Soviet Union’s first independent news agencies. It remains an essential news source in a country whose regime tightly controls the press and has increased its attacks on journalists in recent months.

According to Turan, Aliyev voluntarily went to the Tax Ministry for questioning, where he was arrested and taken to Baku’s Yasamal District Police Station. The news agency also quoted Aliyev’s lawyer, Fuad Agayev, as saying the director’s detention was “in violation of the law.”

Earlier, on August 7, Turan reported that Azerbaijan’s tax authorities accused the agency of under-declaring its profits since 2014 and are demanding 37,000 manats ($22,000) in back payments and other charges. The ministry dispatched a tax inspector to begin an on-site audit of the agency’s activities the following day.

Turan has denied the allegations, referring the case to a Baku economic and administrative court. The news agency notes several irregularities in the investigation, including the tax authorities’ decision to omit information relating to a recent audit absolving Turan of similar allegations. It said the inspection was an attempt to “paralyze” the outlet.

On May 12, a Baku court upheld a decision to block five independent news websites. They include the site of Radio Free Europe/Radio Liberty’s Azeri service, which was accused of “posing a danger” to national security after investigating the financial activities of President Ilham Aliyev’s family.

The country’s last opposition newspaper, Azadlig, was forced to stop producing its print edition in September 2016.

Azerbaijan is ranked 162nd out of 180 countries in RSF’s 2017 World Press Freedom Index.