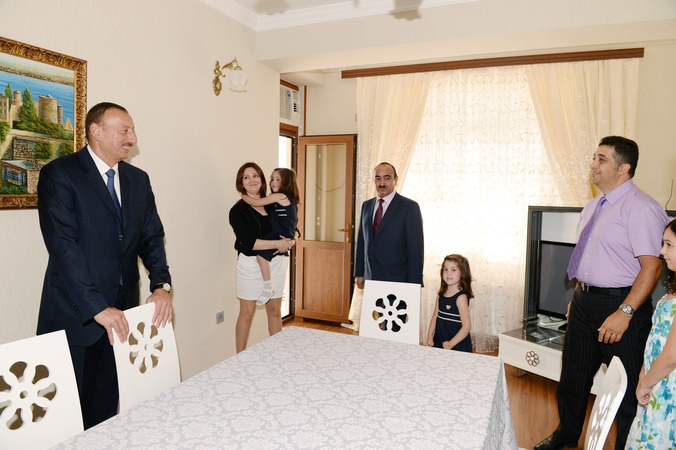 Azerbaijan President Ilham Aliyev, at an event handing over free apartments to government-friendly journalists. One agency that has refused the apartments, Turan, was accused of tax violations on August 7. (photo: president.az)

On August 7, Turan reported that Azerbaijan’s tax authorities accused the agency of under-declaring its profits since 2014 and are demanding 37,000 manats ($22,000) in back payments and other charges. The ministry dispatched a tax inspector to begin an on-site audit of the agency’s activities the following day.

Turan has denied the allegations, referring the case to a Baku economic and administrative court. The news agency notes several irregularities in the investigation, including the tax authorities’ decision to omit information relating to a recent audit absolving Turan of similar allegations. It said the inspection was an attempt to “paralyze” the outlet.

Media watchdog Reporters Without Borders (RSF) condemned the move as a government attempt to curtail the activities of independent media. “It was just a matter of time before the authorities targeted the last independent media outlet still operating in Azerbaijan,” said Johan Bihr, the head of RSF’s Eastern Europe and Central Asia desk.

Turan Information Agency was founded by a group of journalists in May 1990 and was one of the Soviet Union’s first independent news agencies. It remains an essential news source in a country whose regime tightly controls the press and has increased its attacks on journalists in recent months.

On May 12, a Baku court upheld a decision to block five independent news websites. They include the site of Radio Free Europe/Radio Liberty’s Azeri service, which was accused of “posing a danger” to national security after investigating the financial activities of President Ilham Aliyev’s family.

The other blocked sites include those of the opposition daily Azadlig (unrelated to RFE/RL) and Meydan TV, an exile outlet based in Berlin.
Individual journalists have also suffered intensified persecutions this year, undermining the Azerbaijani government’s conciliatory gesture to free a number of political prisoners in March 2016.

The new crackdown’s victims include Fikret Faramazgoglu, head of the Centre for Journalistic Investigations (JAM) and its website Jam.az, who was sentenced to seven years in prison on June 14 and a two-year ban on working as a journalist after his release.

Faramazoglu and his lawyer say the charge brought against him – extorting money from a restaurant owner – was fabricated by the authorities in response to Jam.az’s reporting. Shortly before his arrest, the site reported that Azerbaijan’s police were turning a blind eye to the country’s illegal brothel activity.

Freelance journalist Nijat Amiraslanov met a similar fate when he was arrested on May 22 shortly after posting criticism of the authorities on social media, and sentenced to 30 days of administrative detention. Amiraslanov was reportedly toothless when he appeared in court for his appeal hearing on June 3. His lawyer said threats and force were used to get him to withdraw his appeal and admit his guilt.

The government has also tried softer tactics to stifle criticism. On July 22, 255 journalists in Azerbaijan received new apartments as a gift from the state. But the Turan Information Agency refused to participate in the scheme.

“I am glad that this year they have not approached us” Mehman Aliyev, the agency’s director, told OC Media. “They know well that we do not accept gifts from the government. We know that their goal is to silence the media and to control it.”

Azerbaijan is ranked 162nd out of 180 countries in RSF’s 2017 World Press Freedom Index.