Real TV appears to be indirectly controlled by the family of President Ilham Aliyev. 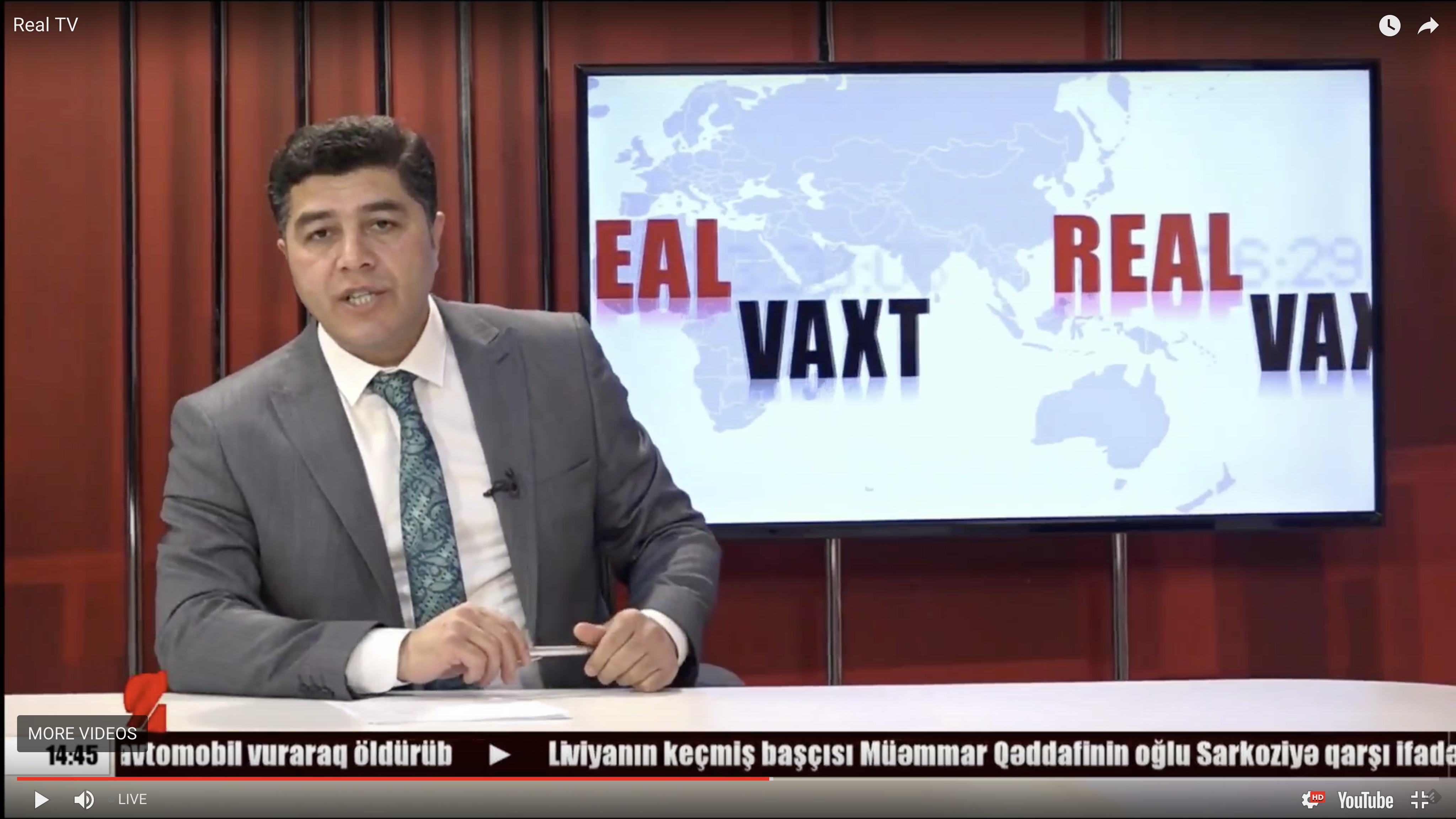 A new, all-news television station has started broadcasting in Azerbaijan. And as is the norm in the oil-rich dictatorship, the network has taken a strongly pro-government line.

What has surprised many in Azerbaijan, however, is that the new station, Real TV, appears to have been built at least in part on the remnants of the country's last independent television station, ANS.

The co-founder of ANS, Mirshahin Aghayev, is the general director of Real TV. Several ANS reporters now work for Real, and even the set design for the new station bears a strong resemblance to that of the old.

“The style is totally ANS, since our team is running it,” said one former ANS and current Real employee, who asked to remain anonymous. (Disclosure: I worked at ANS for a stint in 2011.)

Azerbaijan's government shut down ANS in 2016, shortly after the coup attempt in Turkey, a close ally to Baku. ANS had been planning to air an interview with Fethullah Gülen, the United States-based cleric whom Turkey blamed for the failed coup.

ANS's independence was always limited; it never criticized the country's senior leadership. Aghayev was the subject of much mockery when, after ANS was shut down, he publicly appealed to former president Heydar Aliyev – who had been dead for 14 years – to intercede on the station's behalf.

But the network was nevertheless a relatively rare place where lower-level problems in Azerbaijan could be discussed. And the station's ownership was independent of the government; it was owned by Aghayev and his two co-founders.

Real TV, by contrast, appears to be indirectly controlled by the family of President Ilham Aliyev, according to investigative journalist Khadija Ismayilova. The address at which the television station is registered is the same address as two companies founded by Yashar Gurbanov. "Gurbanov is also a member of the Expressbank board of directors. Expressbank belongs to [the] Aliyevs," Ismayilova wrote in a March 5 Facebook post.

That makes a fundamental difference between ANS and Real, many observers note.

“The employees who will work there [at Real] understand quite well that it is a government project. Therefore it is wrong to say that ANS has reopened,” said Sevinc Osmanqizi, a former editor at ANS who is now based in the U.S. and working on another independent news channel. She also noted that ANS's equipment and property, which had been seized by the government, has not yet been returned.

“The reason that ANS was closed down is still there,” Alasgar Mammadli, a media expert, told Eurasianet, referring to Turkish pressure on Baku. “What is happening now has nothing to do with the previous ANS.”

The controversy around the new station has led many of the transfers from ANS to try to hide their involvement. Two former ANS reporters contacted by Eurasianet denied that they were involved in Real, despite the network releasing promotional videos featuring them.

But Aghayev's role is public, and controversial. He has attacked dissidents on the air and notoriously got into a Facebook fight with Netherlands-based activist Orduhan Temirhan in which he insulted Temirhan's mother and sister.

In another Facebook post, Aghayev hit back at critics and argued that the station was needed to defend Azerbaijan against foreign enemies. “People are trying to explain how television works to me, one of the founders of independent television in Azerbaijan,” he said in a March 12 Facebook post. “This is the time to support me and those who are on the same side as me. The propaganda aggression that the state has been exposed to externally must be resisted by the real fighters. As a television director, I know what kind of weapon it is and how to wield it.”

Osmanqizi, the former ANS editor, said the station appeared to be aimed at blunting the effect of opposition media abroad, like the Berlin-based Meydan TV, as well as independent bloggers and social media activists.

“Real became a necessity because of the growing strength of bloggers and the internet media from abroad,” Osmanqizi said. “The authorities realize that many media outlets are not working and have lost trust among the population.” She said Real appeared to be formed out of “desperation” ahead of presidential elections, scheduled for April.

“In order to become an alternative to Meydan in any other form, they should try to be like it, rather than to fight against it,” said Mammadli, the media expert. “But it's clear that Real will not take the same line as Meydan.