Azerbaijan's New Vice President(s) and its House of Clans 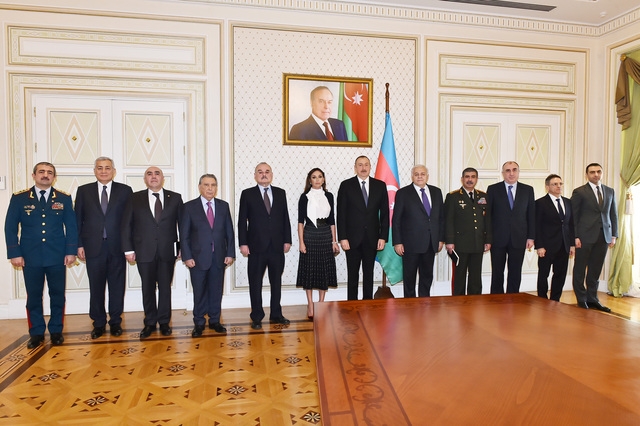 President Ilham Aliyev’s February 21 announcement that from now on his wife Mehriban Aliyeva will be the country’s first vice-president elicited a good deal of mockery, including the inevitable comparisons to the plotline of the TV series House of Cards.

But beyond the jokes, the move appears to be the result of a deadly serious tussle for power and influence within the ruling regime. While intra-government cleavages have existed since Aliyev succeeded his father in 2003, these tensions have intensified in recent years amid an economic crisis and a substantial drop in Azerbaijan’s energy revenues.

Aliyev first announced the plans to introduce the posts of multiple vice presidents last summer and they were duly approved in a referendum in September. The provision is an unusual one. Worldwide only half a dozen states have multiple vice presidents, Azerbaijan’s southern neighbor Iran among them, and the structure typically represents an effort to balance out various regime influences.

While it's not clear what inspired Aliyev to adopt the reform, the constitutional change was proposed in the aftermath of two dramatic events in the Azerbaijani regime’s internal affairs.

The first took place in March 2015, days after Azerbaijan sharply devalued its currency. Jahangir Hajiyev, the long-time head of the International Bank of Azerbaijan, the country’s largest, was sacked and accused of misappropriating many billions of dollars. Dozens of IBA borrowers were detained by the Interior Ministry’s Department for Organized Crime and held in its underground cells until they produced cash, often on loans that were not due until years later. Hajiyev was subsequently sentenced to 15 years in prison.

Then, in October 2015, the Interior Ministry moved in on the National Security Ministry (the former KGB), eventually arresting nearly all of its senior officials and putting its head Eldar Mahmudov, Hajiyev’s in-law, under house arrest. The MNS was eventually disbanded altogether and replaced by two agencies, one for domestic surveillance and another for foreign espionage.

Hajiyev and Mahmudov were two key officials seen as loyal to what is known as the “Pashayev clan” within the regime that includes vast business holdings of the president, the first lady (Pashayeva is her maiden name) and the ruling family’s children. The crackdowns were construed as attacks by the “Nakhichevan clan,” which includes officials and businessmen who have been in their positions of influence since the times of Heydar Aliyev and whose direct loyalty to Ilham Aliyev is suspect.

Shortly after the constitutional changes were made public, the news site Haqqin.az, which often serves as a de facto organ of the presidential administration and part of the Nakhichevan clan, published a list of officials likely to fill the new posts. While Mehriban Aliyeva was the only candidate for first vice president, five individuals were named as likely secondary vice-presidents, including Ramiz Mekhdiyev, the chief of the presidential administration; Baylar Eyyubov, the chief of presidential security; Vasif Talibov, head of the Nakhichevan Autonomous Republic; Kamaleddin Heydarov, minister of emergency situations; and Ramil Usubov, the interior minister. All five belong to the Nakhichevan clan.

The list – which quickly disappeared from the site – suggested that the Nakhichevan clan was acquiescing in a move to shore up the “Pashayev clan,” as long as the leading members were also shown due respect.

While the four of the five clan leaders are indeed natives of Nakhichevan and the fifth used to head its police, what is particularly significant about these men is their direct ties to the late Azerbaijani leader.

Mekhdiyev worked for Aliyev since the 1970s, as did Heydarov’s father. Eyyubov and Talibov each married a niece of Heydar Aliyev and put him up after his self-imposed exile to Nakhichevan in 1990 (while Ilham Aliyev and his family remained in Moscow). Finally Usubov, a native of Nagorno Karabakh, is known for his lack of personal ambition and serving for three decades as Heydar Aliyev’s, and later Mekhdiyev’s, loyal lieutenant.

In the 13 years of his presidency Ilham Aliyev has not risked ousting these individuals, even as he grew increasingly distant to his relatives. His sister, Sevil Aliyeva, lives in London and is known to visit Baku only when her sister-in-law was out of town. In early 2016, Ilham Aliyev did not attend his uncle Jalal Aliyev’s funeral. In the meantime, amid the decline in oil revenue, arguably Ilham Aliyev’s main source of legitimacy, his own appointees have come under attack from the “Nakhichevan clan” figures.

On February 22, Haqqin.az reported that Talibov would become the second vice-president, suggesting that the compromise arrangement between the clans has extended to the vice-presidencies. There was no official confirmation as of press time.