In his first remarks about the monthlong blockade, Aliyev denied there was a blockade, pointing to Russian peacekeeping vehicles’ use of the road. 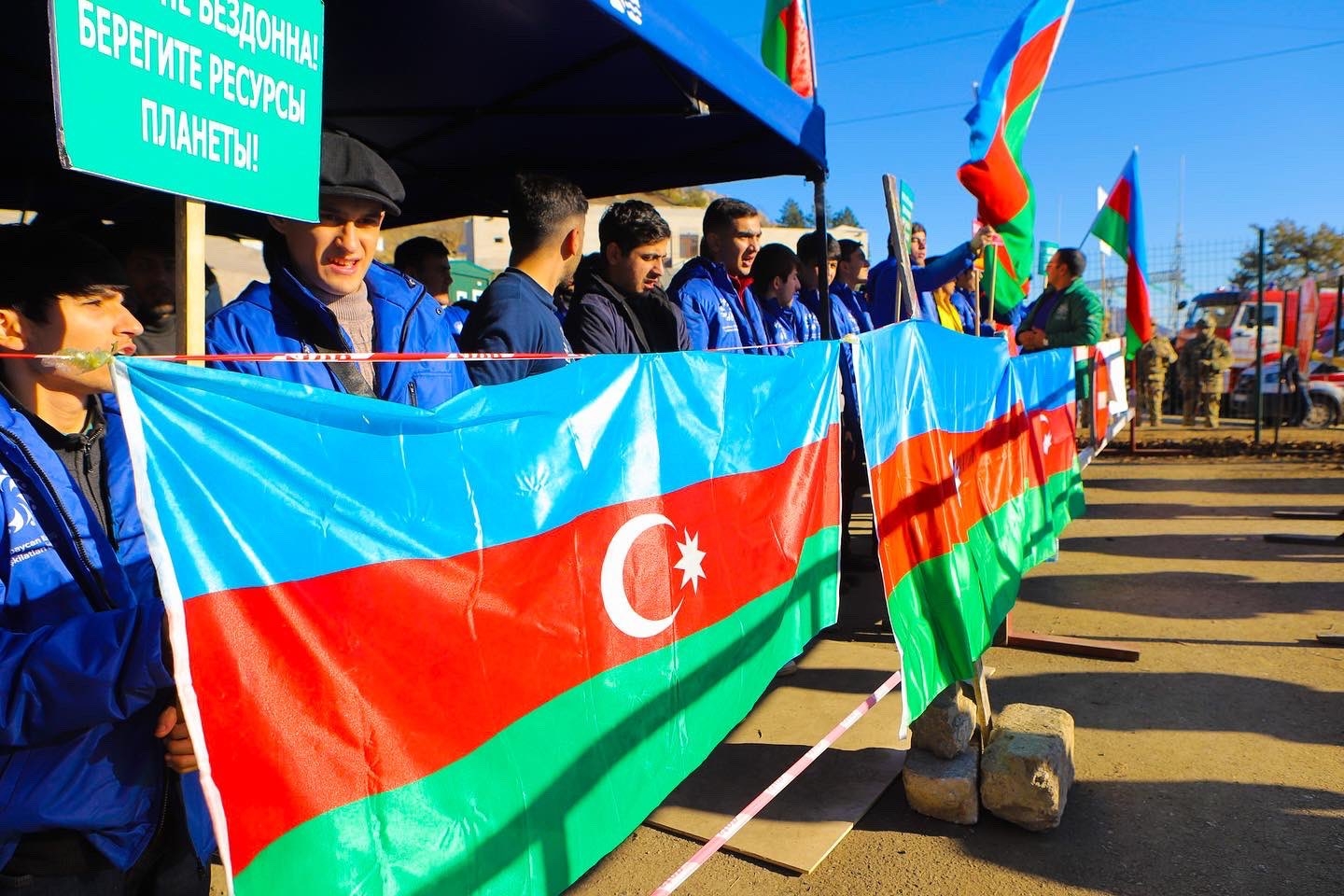 The activists blocking the road, who appear to be receiving support from Baku, say they are concerned about mining in Karabakh. (Azerbaijan government handout)

Azerbaijan’s president has made his first comment on the monthlong blockade of the road connecting Armenia and the ethnic Armenian-populated Nagorno-Karabakh region.

On January 10, in an interview with local TV journalists, President Ilham Aliyev challenged the idea that there actually is a blockade. "It is unfair to call the events on the Lachin-Khankandi road a blockade,” he said. (Khankandi is the Azerbaijani name for the town Armenians call Stepanakert, the de-facto capital of Nagorno-Karabakh.)

Aliyev said that up to 400 trucks belonging to Russian peacekeepers have passed along the road.

“Surely, they carry food and necessary items for people living there. We don’t protest it. Our purpose is not blockade,” he said. “So it’s just another anti-Azerbaijan show. I can’t find another name for this. Armenians and their sponsors think that they’ll achieve something by using it against us. But they won’t achieve anything. We have legitimate demands.”

Since December 12, a group of several dozen Azerbaijanis belonging to government-linked environmental organizations have been holding a demonstration on the road near Shusha, a key Azerbaijan-controlled city of Nagorno-Karabakh. They say they are there to call attention to what Azerbaijan calls illegal mining in Karabakh, and the use of the road to transport minerals into Armenia.

"The young people who protest on the Lachin-Khankandi road are our pride. They are there day and night in frosty and snowy weather, they demand their rights and once again show the whole world how high-quality the Azerbaijani youth are. The separatists are busy spreading completely false information to the world,” he said.

Armenia and Nagorno-Karabakh say the demonstrators have effectively cut off the region from the rest of the world, leading to shortages of medicines and foodstuffs, and leaving some residents stranded in Armenia. The United States, European Union, and other bodies have called on Baku to restore traffic on the corridor.

Since the beginning Azerbaijan has denied that there is a blockade, pointing to passages by vehicles of Russian peacekeepers and the International Committee of Red Cross, and issuing assurances that Armenian civilians can pass along the road too.

On January 8, Azerbaijani TV channels showed footage of what it said was an Armenian man approaching an Azerbaijan Army post and asking for help, saying that he was “hungry and cold and wanted a cigarette.” The channels showed video of an older middle-aged man blowing kisses as he passed between ranks of demonstrators and TV cameras, and then getting into a Russian peacekeeping vehicle.

Public TV said that the Armenian was given what he needed and sent back to Stepanakert. It declared: “This fact has once again demonstrated Azerbaijan's humanitarian position, the peaceful nature of the action, and the fact that the road is open for humanitarian purposes.”

“On the other hand, the Armenian resident's request for help is an example of the conditions in which the 25-30 thousand Armenian population, who are being held hostage by Ruben Vardanyan, are kept, and their happy life and safety depends only on the state of Azerbaijan,” the channel added in a swipe at the de facto region’s new state minister, who is coordinating the response to the blockade. (Armenian sources generally cite a figure of 120,000 for Nagorno-Karabakh’s Armenian population.)