Authorities send news outlets instructions on how to cover events large and small. We obtained a cache of the messages. 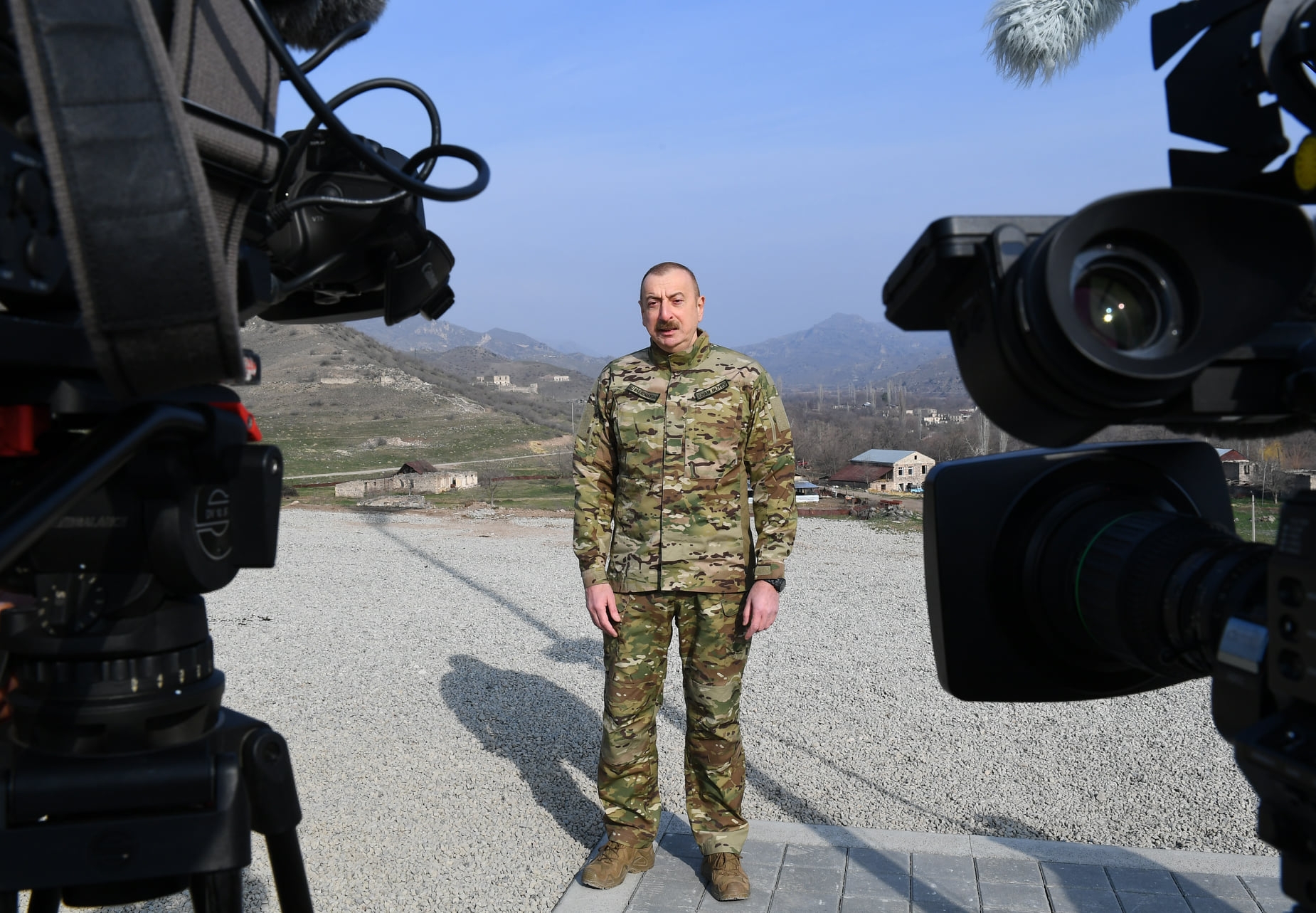 All the news that’s fit to print (president.az)

For example, on a recent day it was about Iran. Baku and Tehran were suffering through a period of heightened tensions, and Azerbaijan’s government was trying to thread a needle: stand up to what it saw as aggression from its much larger neighbor, without letting things escalate too far.

So Azerbaijan’s media got specific instructions.

“Based on President Ilham Aliyev's speech on Iran, it is requested to expand the campaign on Iran-Armenia relations, drug trafficking, and looting of the occupied territories [in and around Nagorno-Karabakh] by these two countries,” went one October 15 message, hours after Aliyev had spoken at a video summit of the Commonwealth of Independent States.

A few hours later, media agencies got another message. This time they were asked to be careful with their wording: no expressions that insult the “honor and dignity” of Iran’s supreme leader, Ayatollah Ali Khamenei. There should be no mention of “South Azerbaijan,” as Azerbaijani nationalists refer to the northern provinces of Iran, populated heavily by ethnic Azerbaijanis. Media should use “hard logic and facts” to make the case that “instead of making false accusations against Azerbaijan, Iran should apologize.”

Azerbaijan’s media got to work immediately, airing all sorts of never-before-voiced accusations against Tehran.

The news agency APA published a lengthy piece detailing Iranian companies’ involvement in Armenia’s long occupation of Azerbaijani territory. The Trend News Agency followed up with an interview with member of parliament Javid Gasimov in which he alleged that Iran had been sowing “drug plantations” for 30 years on Armenian-occupied Azerbaijani territory. Another state-affiliated media outlet, Axar, quoted an analyst who claimed that Iran had used Karabakh not only for drug trafficking but for money laundering.

These sorts of messages from above arrive regularly, instructing Azerbaijan’s media every day on what to cover, and how. Eurasianet obtained a cache of the messages, which provide unique insight into how the state’s tight control over the media works.

It’s not clear where the messages originate; the versions Eurasianet obtained had been forwarded from the original source. But journalists familiar with the instructions told Eurasianet, on condition of anonymity, that they believed they came from the office of the president.

On September 20, a week before the one-year anniversary of the start of the war with Armenia, “we ask you to produce materials and start public discussions with a tempo increasing every day,” the message read. “The keywords are ‘Victorious Azerbaijani people’ and ‘Triumphant Supreme Commander-in-Chief.’”

Then, as the one-year anniversary of Azerbaijan’s victory approached, the tone was again to gradually change: “From November 1 to November 7, the policy is to significantly reduce the sad content (crying and so on) and to reorient toward Victory Day.”

On August 26, media were requested to exhaustively cover the birthday of first lady and first vice president Mehriban Aliyeva, “but without the effect being artificial,” it clarified.

On October 16, following a controversial rise in household utility prices, journalists were given the names and phone numbers of government energy officials to interview.

Often the instructions are on what not to cover. When Turkish President Recep Tayyip Erdogan was visiting Azerbaijan with Aliyev, he made a joke about the fact that Jahangir Asgarov, the president of Azerbaijan’s flagship airline AZAL who was accompanying the two leaders, did not have a moustache. The exchange was captured on video but shortly after, media got a message: “Please do not broadcast the mustache joke […] that part of the video can be presented on social media by making that section inaudible.”

When Aliyev was interviewed by Italian newspaper La Repubblica, he was asked about an investigative report, known as the Pandora Papers, that detailed his family members’ and associates’ vast real estate holdings in London. Aliyev parried the question, and the transcript was accurately recorded on his website. But the media were requested to ignore it: “Hello, please do not highlight the part about the ‘Pandora papers’ in President Ilham Aliyev’s interview with the Italian newspaper La Repubblica in headlines and stories.”

Azerbaijan is far from the only country whose government tries to steer media coverage. In Georgia, government representatives are known to have cozy relationships with heads of friendly media, speaking to them regularly by phone and communicating on Facebook messenger groups. In Armenia’s pre-revolution days, the president’s office also spoke regularly with affiliated media to discuss coverage; the current government doesn’t have as many ties with the press, but it too has been steadily increasing control over media since taking over in 2018.

The difference in Azerbaijan is the formalization of the process, and the fact that there are very few outlets that aren’t subject to the instructions.

Until the 2000s, media was relatively diverse in Azerbaijan, expressing a wide variety of perspectives, said Khaled Aghaly, a lawyer specializing in Azerbaijani media law. But the government has over the years steadily cracked down on independent media, while building up a network of friendly media outlets.

“The result of this policy is that the government is now able to control broadcasting and other media outlets that are most influential in influencing public opinion in Azerbaijan,” Aghaly told Eurasianet. “Unfortunately, [government] media policy in Azerbaijan is to spread content that praises the government, praises what it does, and promotes it to the public.”

Occasionally, the wires get crossed.

A message sent out on October 7 was related to a proposal to switch around the country’s national holidays. The new calendar would mark May 28 as Independence Day and October 18 as Restoration of Independence Day.

Many in Azerbaijan’s current opposition believe the government tries to downplay the legacy of the first republic for political reasons, and the holiday rearrangement was seen in that light.

“The government's goal in these matters is clear. Their goal is to erase from history the struggle for independence in which the Aliyevs did not participate,” Arif Hadjili, the leader of the opposition Musavat party, told Berlin-based news outlet Meydan TV.

But media were to explain it another way.

In a lengthy explanation of the logic behind the new calendar, the message argued that it would “ensure a clearer and more pronounced expression of the political and legal succession between the Azerbaijan Democratic Republic and the modern Republic of Azerbaijan.” It continued: “It also fully refutes the Armenian argument that the former Nagorno-Karabakh Republic was never part of the independent Republic of Azerbaijan and gained independence as a result of the September 2, 1991 referendum.”

Several state-affiliated media simply copy-pasted the text and published it on their website, but with varying attributions.

The news agency APA published the text, word-for-word, as coming from the mouth of member of parliament Ziyafat Asgarov. The next day, another news site part of the APA group, Lent.az, published the text verbatim as well, this time attributing part of it to Asgarov and another part to a historian, Boran Aziz.

And it kept coming. A week later, the identical text appeared in the state-owned newspaper Sas purportedly written by another MP, Ceyhun Mammadov. Then, in the news website Telegraf, it was attributed to yet another MP, Konul Nurullayeva.

“The MP believes that” the new holiday schedule would “‘ensure a clearer and more pronounced expression of the political and legal succession between the Azerbaijan Democratic Republic and the modern Republic of Azerbaijan,’” Telegraf wrote. “It also fully refutes the Armenian argument that the former Nagorno-Karabakh Republic was never part of the independent Republic of Azerbaijan and gained independence as a result of the September 2, 1991 referendum,” she is reported to have told the newspaper.