The remarks earned the country’s senior Islamic official a rebuke from a senior adviser to Turkey’s president and a smear campaign in Azerbaijani pro-government media. 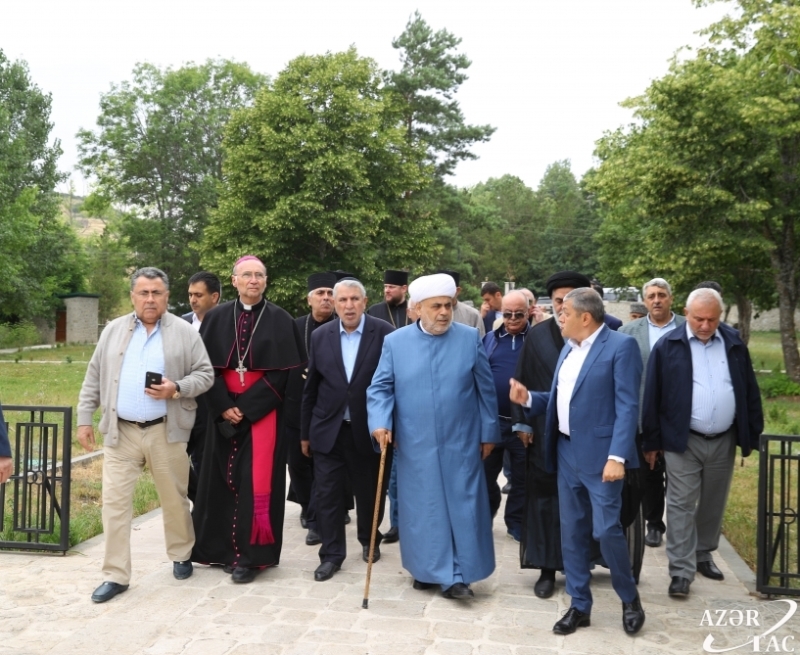 Azerbaijan’s top cleric has gotten himself in hot water for effusively praising Iran’s supreme leader and feuding online with a senior adviser to the president of Turkey, Baku’s main ally.

Now, state-controlled media are calling for the resignation of the Sheikh-ul-Islam Allahshukur Pashazadeh, who has been Azerbaijan’s senior Muslim official since 1980.

“I would like to thank the president of Turkey, Mr. [Recep Tayyip] Erdogan and Ayatollah Khamenei, whose fatwa was a harbinger of victory. He issued a fatwa stating that the land of Karabakh is the land of Islam,” Pashadazeh said. “It almost proved our victory, it led to victory.”

(It wasn’t clear exactly which comments Pashazadeh was referring to. Khamenei himself did not issue a fatwa about Karabakh, though he did say during the war in a televised statement that: "Territories seized by Armenia must be returned and liberated. This is an essential condition … These lands belong to Azerbaijan, which has every right over them." Another group of clerics, personal representatives of Khamenei, did separately issue a fatwa calling Karabakh a “land of Islam.”)

A few days later, a senior adviser to Erdogan, M. Mucahit Kucukyilmaz, took issue with Pashadazeh’s comments. In a July 23 tweet that included a Turkish translation of the Azerbaijani cleric’s remarks, Kucukyilmaz commented: “This means that while Khamenei was sending arms to Armenia, he also sent a fatwa to Azerbaijan […] But Khamenei's fatwa defeated Khamenei's weapons!”

Nevertheless, at the same time Azerbaijani pro-government media started to publish a series of articles criticizing Pashazadeh for his praise of Iran.

One, on the news website Oxu.az, compared Pashazadeh to a “puppet of the mullah regime” and said the comments suggested he needed both retirement and the help of a psychologist.

Pashazadeh tried to tamp down the controversy, arguing in an interview with news outlet Gununsesi that his words had been distorted and complained that Kucukyilmaz’s tweet was casting a shadow over relations between Azerbaijan and Turkey, which had provided Baku with substantial support during the war, leading to ties between the two longtime allies that are perhaps closer than they have ever been.

“I am a man of religion, not of either Iran or Turkey,” he said. “I have proved it many times in my life, and have lived correctly. But some people want to use it in a political way.”

The day after that interview, Kucukyilmaz also tried to put the dispute in the past, tweeting that “out of fairness we have to note that the Sheikh also thanked the president of Turkey and the country itself for the Karabakh victory. We, people, come and leave; the friendship of Turkey and Azerbaijan is eternal.”

While all of that would seem to cool things down, pro-government media in Azerbaijan had only gotten started.

News website Report.az on July 25 published a piece on the affair headlined “Sheikh, it is time to resign.”

The piece revived a minor controversy from earlier in the month when Pashazadeh had escorted a number of religious leaders to Shusha, the historic city that Azerbaijan retook from Armenian forces during last year’s war. While some of the figures prayed at a mosque in Shusha, Khamenei’s personal representative in Azerbaijan, Ali Akbar Ojagnejat, stood and prayed in front of Pashazadeh.

Report.az suggested that Ojagnejat’s positioning was not a coincidence but an expression of Pashazadeh’s subservience. “Secondly, where was Ojagnejat, who was sitting in front in Shusha this summer, where was he during the Patriotic War?” the piece asked. “Why didn't he say to the state he represented, "Send fewer weapons to Armenia, they are killing Azerbaijani Muslims with those weapons!”

The next day, Turkish television channel Haber Global, widely believed in Azerbaijan to be controlled by the Azerbaijani state oil company SOCAR, aired an eight-minute segment on Pashazadeh, again accusing him of subservience to Iran. “If Khamenei didn’t say that those who lost their lives in Karabakh were martyrs, would they still be?” the presenter ironically asked. "Pashazade not only lost the trust of the Azerbaijani people, but also earned their hatred.”

Amid all this, Pashazadeh has gone on the social media defensive. The Caucasus Muslims Board Facebook page is full of articles defending him in the controversy, and on July 25 it launched a Twitter account.

As of July 27 Pashazadeh remained in his post. He is perhaps the longest-serving government official in the Caucasus, first elected in 1980 chairman of the Spiritual Administration of Muslims of the Caucasus, a Soviet government body. Following Azerbaijan’s independence, it was later renamed the Caucasus Muslims Board, but it has largely continued its role of enforcing state control of religious practice in the country.

Pashazadeh has been a reliable ally of Aliyev; in 2018 he instructed the country’s clergy to use their Friday sermons to promote the president’s reelection.

In spite of the black PR campaign, which in Azerbaijan usually ends in the target’s removal from office, analysts suggest that Pashazadeh is likely to keep his job for now.

The cleric has merely been following government orders, wrote Altay Goyushov, the head of the think tank Baku Research Institute, on his Facebook page.

“Pashazadeh can not take Ojagnejat to Shusha by himself, if he even wants to,” Goyushov wrote. “This is the policy of the Azerbaijani government, Pashazade just implements it.” But Goyushov continued that Pashazadeh’s execution was, as is often the case, clumsy. “This man [Pashazadeh] always expresses his thoughts in such a way that the whole world laughs at him.”

Kanan Rovshanoglu, an analyst of religious affairs, said that the controversy may have originated by forces within the government who are anti-Iran and seeking to “assassinate his [Pashazadeh’s] reputation.”

“But this isn’t the line of the government as a whole,” he told Eurasianet. “On the contrary, at present the Azerbaijani leadership is trying to maintain normal relations with Iran.”

Rovshanoglu added that the cleric has good ties with the government, as well: “There is no reason to fire him now.”