The issue has touched Abkhazian sensitivities about the intentions of its overbearing ally, Russia. And the controversy isn’t going away. 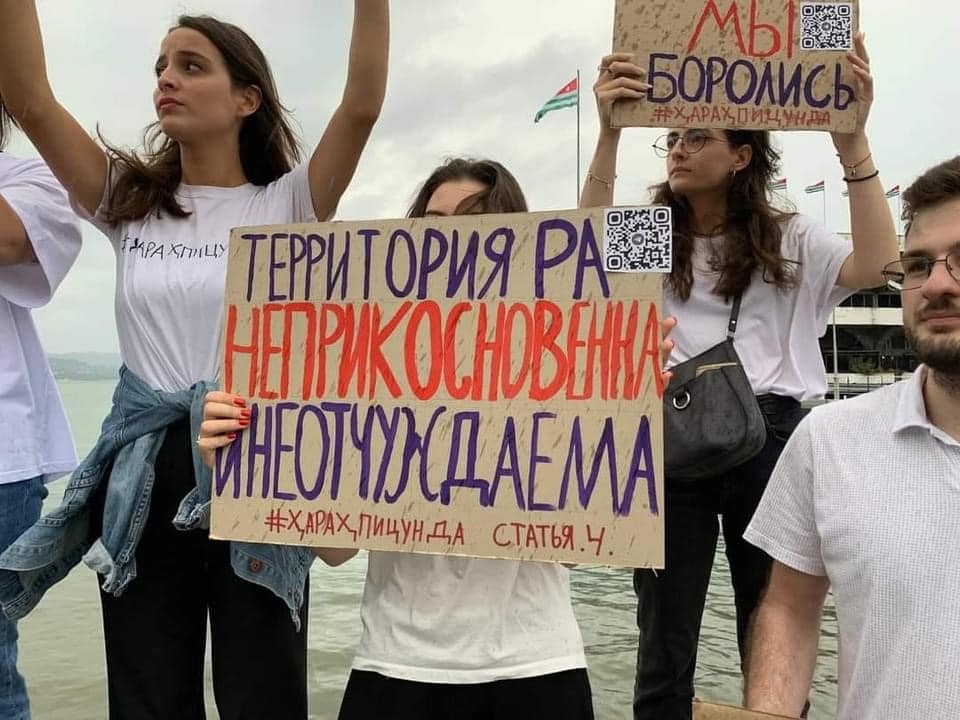 Protesters at a September 5 demonstration against a planned handover of land to Russia. (photo: Facebook, Zurab Smyr)

Protests are continuing in Abkhazia against the planned transfer of land to Russia, as Moscow puts ever more open pressure on its protectorate to hand over the land.

“You don’t pay for friendship with land,” read the text on the shirt of one participant in a September 5 demonstration in Sukhumi against the proposed handover to Russia of a historic vacation residence in the territory. “I love Russia. I am against ratification,” read a banner from the same rally.

The controversy began in July when a deal between the Russian government and the de facto authorities, allowing Russia to take over the complex in Pitsunda, became public.

The news triggered sensitivities about land in Abkhazia, a small, largely unrecognized republic that broke away from Georgia in the 1990s. The de facto authorities have forbidden the sale of land to foreigners, seeing it as a potential threat to their sovereignty. And that includes Russia, the only major country to recognize Abkhazia’s independence and which provides heavy financial and military backing to the breakaway territory.

The news initially sparked public controversy, and the discontent grew into a protest movement, with regular demonstrations in Sukhumi and the political opposition collecting signatures against the parliamentary ratification of the deal.

The deal was controversial because it appeared to crack the door open for greater Russian acquisitions of land in the territory. Moscow has long been pushing its allies to allow that, but many in Abkhazia fear that if Russians could buy land then the small, poor, but scenic territory would quickly be snapped up by Russian developers.

Russia’s ambassador to Abkhazia, Mikhail Shurgalin, poured fuel on the fire by suggesting that the handover of Pitsunda was in fact intended to be the first step in a larger program of allowing greater Russian investments in the territory.

“Protracting consideration of the ratification of the Pitsunda agreement will obviously affect the desire of the Russian side to invest in large-scale projects on the territory of the republic such as the construction of an airport, tourist facilities, and reconstruction of the Abkhazian railroad,” Shurgalin told RIA Novosti, Russian state media agency, on August 26.

“What they all have in common with Pitsunda is the need to make decisions on issues related to land and real estate. The choice is between openness and willingness to engage in mutually beneficial cooperation, on the one hand, or closedness and protectionism, on the other.”

The diplomat also warned that “political speculation” over the issue would harm the further development of cooperation between Moscow and Sukhumi.

The comments did not go over well in Abkhazia, where many took them as blackmail.

“Sadly, the tone of Mr. Ambassador's remarks was more reminiscent of the style of the imperial viceroy towards a colony than that of an ambassador to a friendly state,” the Forum of National Unity of Abkhazia, a major opposition group, said in an August 30 statement.

Even former de facto leader Raul Khajimba, widely regarded as a Kremlin favorite, spoke out against the deal in a rare reappearance since his departure from power in 2020.

“If we close our eyes to Pitsunda, tomorrow they will make proposals related to the sale of land,” Khajimba warned during an August 30 opposition meeting.

Both Moscow and Sukhumi authorities have sought to reassure people that the deal does not entail any dangers to the sovereignty of Abkhazia.

On September 13, Sukhumi cited a note diplomatique received from the Russian Foreign Ministry providing assurances that the dacha facilities and lands will be used solely for events involving the Federal Guard Service, a body responsible for the protection of high-ranking Russian officials, and not for the detriment of Sukhumi’s interests.

Abkhazia’s de facto foreign minister Inal Ardzinba claimed that the controversy was being ginned up from “outside,” including from Tbilisi.

“Natural concerns about the Pitsunda issue are being picked up and artificially inflated from the outside,” Ardzinba told Sputnik Abkhazia on September 12. “The Georgian government, through NGOs, is trying to interfere in our internal affairs.”

Ardzinba said the alleged goal of the external forces was to encourage anti-Russian sentiments in Abkhazia to force a change of the foreign policy course.

But even as the protests continue, organizers have sought to separate their opposition to the deal from broader geopolitical questions.

“The Republic of Abkhazia and its people are a reliable ally of the Russian Federation,” Aidgylara, a prominent Abkhaz group opposing the deal, said on August 30. “The misjudgments of the rulers and diplomatic representatives should not, and cannot, change this.”