Bad debt to “disappear” in Georgia

A near total bailout of delinquent loans brings relief to many Georgians, in spite of criticisms that it was a vote-buying scheme. 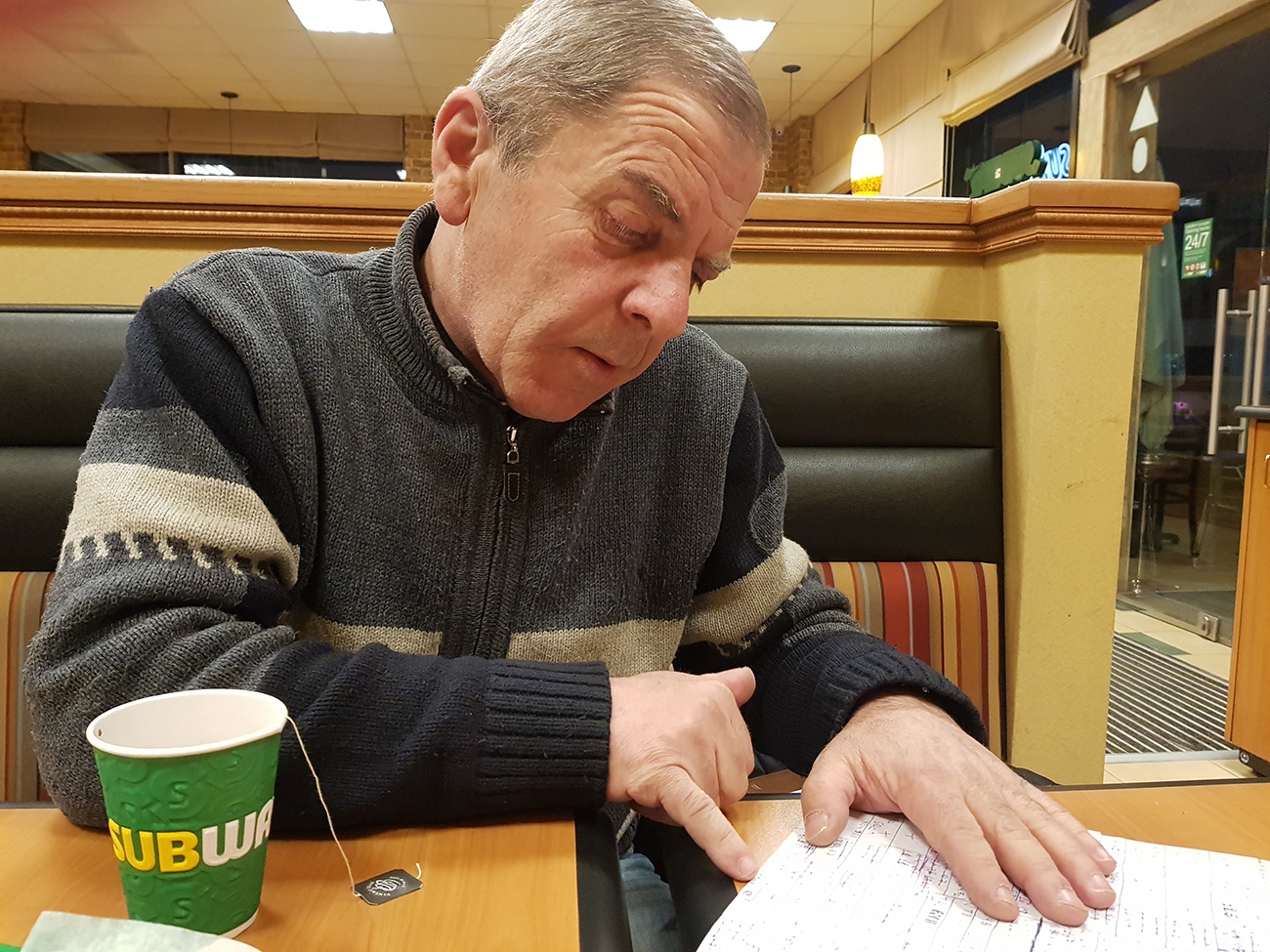 Klimenti Pachuashvili, a 54-year-old veteran with a dizzying array of debt, is a beneficiary of a new scheme to pay off Georgians' bad loans. (Giorgi Lomsadze)

For the past two weeks, Klimenti Pachuashvili, a 54-year-old war veteran, has been watching as most of his many financial liabilities disappear one by one.

He has been logging on daily to a new website, vali.ge, set up to manage a scheme to pay off the many bad debts held by individual borrowers like himself. The scheme was rolled out in the final days of Georgia’s bitterly contested presidential campaign; it is backed by Cartu Foundation, a charity connected to the country’s richest and most powerful man, Bidzina Ivanishvili, and was widely criticized as a ploy to buy votes for Ivanishvili’s hand-picked candidate, Salome Zourabichvili.

But debt-saddled Georgians like Pachuashvili aren’t asking questions. “You can look up yourself by entering your name and I.D. number, and see if your debt is gone,” said Pachuashvili, who was displaced from the breakaway region of Abkhazia, along with most other ethnic Georgians there, during the conflict of the early 1990s.

Like many Georgians in the past few years, Pachuashvili had gotten into the habit of borrowing small amounts from a variety of sources, using new loans to pay off old ones, slowly descending into a pit of debt.

He keeps track of his debts on a crumpled piece of paper documenting a dizzying array of his financial obligations – from nearly all the major Georgian banks and payday loan services – and has been comparing his records to those on the vali.ge website. By December 18, about $4,700 of his debt was marked as settled on the website.

“They also took care of my wife’s loan,” he said. All of his bank loans are now gone, though Pachuashvili has yet to be cleared of his liabilities to subprime lenders, a booming business that many blame for Georgia’s runaway household debt.

The government has said that by the end of the year, the overwhelming majority of bad debt-laden Georgians will be cleared of their loan obligations, totaling an estimated $1.5 billion. “The 600,000 citizens and their families…will meet the New Year without debt,” Prime Minister Mamuka Bakhtadze said, announcing the plan shortly before the election.

Included in the bailout are individuals who had borrowed up to 2,000 lari (about $750) or less prior to 2018 and then failed to meet their obligations. Bakhtadze said that such borrowers make up some 95 percent of Georgians with bad credit history.

The vali.ge website provides regular updates on the number of citizens included in the bailout, helping put into perspective the scale of the bad-debt problem in Georgia, which has the highest household debt to GDP ratio in the region. As of December 20, the head count stood at almost 594,000 individuals, with their outstanding liabilities totaling about 3.9 billion lari (about $1.5 million) and counting.

While the scale of those figures appears impressive, the program actually costs far less. The real amount that Cartu Foundation is paying banks and lending services to write off the debts is being kept under wraps, and sources from two major banks told Eurasianet that Cartu is paying them just 9 percent of the total liability.

That rate is calculated based on the original amount of the loans and does not include past-due penalties. Since banks had little hope of recovering most of these debts, they went along with the offer in spite of the low returns, the bank sources say.

Economist Giorgi Papava crunched some numbers based on publicly available information about the bailout and arrived at a figure an order of magnitude less than the official one. “It could be around 200 million lari [about $75 million],” said Papava, an associate professor of economics at Ilia Chavchavadze State University in Tbilisi.

Pachuashvili had been paying down his debt, albeit slowly: a part of his salary and half his monthly 320 lari ($120) pension as an Abkhazia war veteran were going to service his lending agencies’ loans. But he had altogether ignored the past-due fees that eventually made up the lion’s share of his debt.

The government claims that once such borrowers are in the black they will also be removed from credit-history blacklists; these people will then regain access to credit, which will potentially spur business activity. Papava calls this another exaggeration.

Under the deal, credit-scoring agencies are indeed required to remove delinquent borrowers from the so-called blacklist, but banks have their own lists. The lenders know full well who are the unreliable customers and are unlikely to give them the second bite of the apple, Papava says.

Papava argues that the program’s economic benefits are small in comparison to its political impact.

The 600,000 citizens included in the program make up 17 percent of registered voters. Although the bailout is paid for by the Cartu Foundation, the distinction between this charity group and the government is blurry. Cartu’s founder, Ivanishvili, is also the chairman of the ruling Georgian Dream party. The Georgian Dream-backed Zourabichvili finished in a surprising tie with her opposition rival in the first round of the presidential race but, after the debt-relief scheme was announced, gained about 530,000 votes in the runoff and won by a commanding margin.

Pachuashvili says that he did not vote in the first round of the election, but insists that the debt relief did not affect his political choice. “I don’t particularly like Salome [Zourabichvili], but I really dislike Mikheil Saakashvili,” he said. Saakashvili, the former president, and his United National Movement party backed the opposition candidate, Grigol Vashadze.

While Vashadze and his supporters continue to challenge Zourabichvili’s legitimacy, honest loan payers also are miffed about the program. “It makes me wonder why I’ve been paying my debt to the last tetri [one-hundredth of a lari], while all these freeloaders got away with it,” said Nana Murusidze, who works at a coffee shop in Tbilisi. She noted that parliamentary elections are slated for two years from now. “Now I think perhaps I should stop paying back my loans and just wait until 2020.”