A new joint film production comes as ties between the two traditionally wary neighbors are warming. 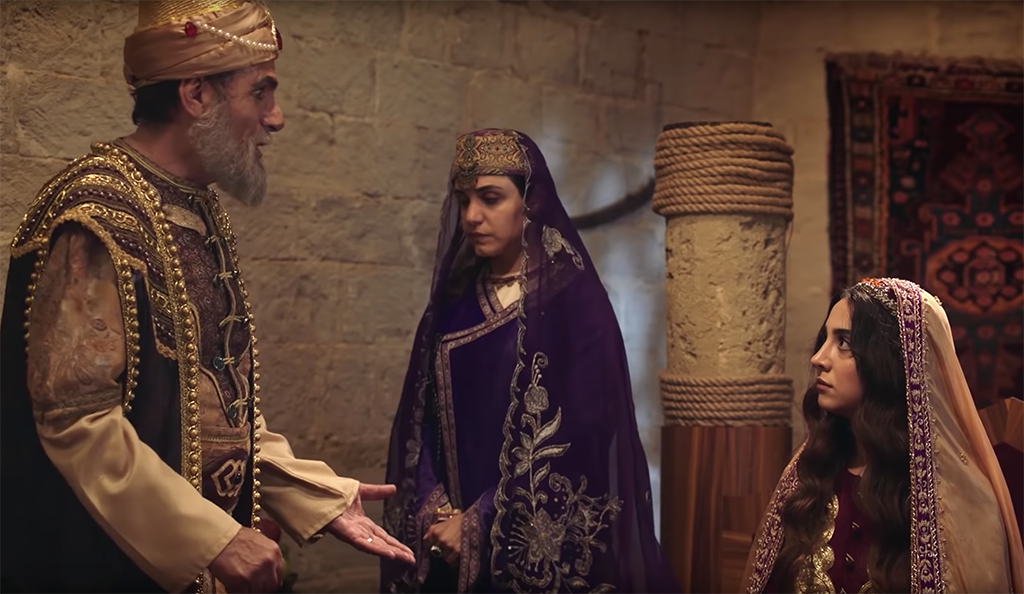 A scene from The Castle of Love (screenshot)

In the new film The Castle of Love, a young man tries to save his lover from jumping to her death from Baku’s landmark Maiden Tower. It’s a variation on the classic Azerbaijani legend, with a unique twist: some of the action takes place in Tabriz, across the modern-day border in Iran.

The film is a joint Azerbaijan-Iran production, a relative rarity between the two neighbors who have traditionally regarded one another with suspicion.

The producer, Amir Shahab Razavian, is Iranian and the director, Ilham Qasimov, is Azerbaijani. While most key members of the production crew are from Iran, most of the cast is from Azerbaijan. One exception is Reza Naji, an ethnic Azerbaijani actor from Iran who won international renown for his work in the Iranian art film Song of Sparrows.

“Producing this kind of movie is very important for communication between Iran and Azerbaijan,” Razavian told Eurasianet in an interview.

The film, a slapstick romantic comedy, does not directly touch on the sensitive cultural and historical issues that have complicated ties between the two countries. Azerbaijan has been suspicious of Iran’s attempts to promote its form of conservative Islam among its own, majority-Shia population. And Iran fears Azerbaijan’s potential as an alternative source of authority for its ethnic Azerbaijani population, estimated to number about 30 million. Many Azerbaijanis, meanwhile, sympathize with their brethren across the border, whose language and cultural rights are often violated by the central government in Tehran.

While the film sidesteps those issues, that it is in the Azerbaijani language and that the action moves back and forth between Baku and Tabriz – the center of ethnic Azerbaijani life in Iran – is an acknowledgment of the shared history of Azerbaijanis on both sides of the border. The region was a shared cultural and political space until the Russian Empire’s expansion into the Caucasus in the early 19th century. The 1828 Treaty of Turkmenchay between Russia and Persia set the boundary that still exists between today’s Azerbaijan and Iran, separating the Azerbaijanis into two countries.

The film has been supported by both governments. Razavian said that the Iranian government financed one-quarter of the total production cost of 400,000 manats (about $230,000). It has been promoted in Iranian state media and Twitter accounts as well as by Azerbaijani government organizations.

In recent years, tensions between Azerbaijan have subsided. The signing last year of an agreement to delimit the boundaries of the Caspian Sea removed one persistent irritant, and since President Hassan Rouhani took over from his more Islamist predecessor, Mahmoud Ahmadinejad, promotion of Shiism abroad has “become secondary,” wrote Azerbaijani analyst Azad Garibov in a recent piece for the Eurasia Daily Monitor. “[T]he major problems that had generated mutual suspicions and kept bilateral relations strained for most of Azerbaijan’s post-independence history have recently been largely resolved,” Garibov wrote.

Nevertheless, Razavian said that there are no formal intergovernmental agreements to facilitate joint film production, and the state support remains low. He said that he hopes to pursue other joint productions in the future but that for now he remains hesitant. “Before that, I need coproduction agreements between governments. Without that, investing is not safe for Iranian or Azerbaijani producers,” he said.

The Castle of Love debuted in Azerbaijan in March and Qasimov, the director, told Eurasianet that the returns so far have been “disappointing.” But he attributed that in part to a recent increase in movie ticket prices, which suppressed viewership of films across Azerbaijan. While the film has yet to be screened in Iran, Razavian expects it to be a commercial success there. Noting the large Azerbaijani population, he said “the audience will be eager to watch a movie with a Turkic language, the Azeri language.”

There have only been a handful of joint film productions between Azerbaijan and Iran, most recently the 2011 The World Turned Upside Down by Azerbaijani director Anvar Abluc, which depicts drug trafficking between the two countries. “We cannot generally say that there is sustainable cooperation between Iran and Azerbaijan in joint film production,” Sevda Sultanova, a film critic and author at the Baku Research Institute, told Eurasianet.

Sultanova said that more ties with Iran’s well-developed film industry could help Azerbaijan. “One of the main things that Azerbaijani cinematographers should learn from their Iranian colleagues is how to make a professional feature film with a low budget,” she said.

The Castle of Love was not for everyone, though. One of Azerbaijan’s leading film review YouTube figures, Elchin Mammadov, said the film suffered from a number of historical inaccuracies. For example, some shaman characters were presented merely as “cunning fortunetellers” rather than the archetypal shamans of Turkic mythology, he complained. “To be honest, I didn’t see any efforts to show the cultural links between Iran and Azerbaijan,” he told Eurasianet.

Another YouTube film reviewer, Imran Asadov, also panned the film. “It’s at the same level as any other romantic comedy,” he told Eurasianet.