Baku youth rally to save historic building from demolition

The pre-Soviet Molokan Temple had been used for a new alternative cinema project. 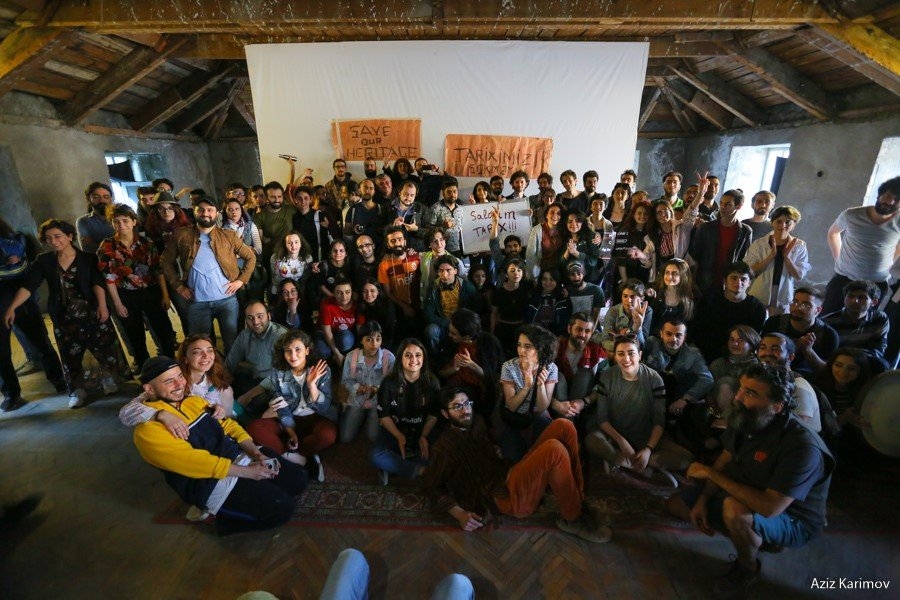 A historic Baku building that had recently been repurposed for an alternative cinema group has been slated for demolition, prompting a group of young activists to occupy the building.

The building, known as the Molokan Temple, was built in 1913 as a place of worship for Baku’s Molokans, who follow an offshoot of Russian Christianity. Under the Soviet Union the building was taken over by the state and Azerbaijan’s first radio station was founded there in 1926.

Until recently, the building had been under the control of the Ministry of Transport, Communications and High Technologies. It was then privatized through a process that has remained opaque. In February, Salaam Cinema, a group devoted to promoting local filmmaking, signed a rental contract with a company that manages the space.

On May 6, during a documentary film workshop at the building, a group of city officials and workers arrived at the building and said they intended to tear it down, representatives of Salaam said.

“Officials from the Baku municipality came to the building, together with the owner. We were told that the building is damaged and dangerous, but no one presented any document or court decision justifying it,” Ilkin Huseynov, a photographer and one of the founders of Salaam, told Eurasianet. After news of the visit spread, about 80 young people gathered inside the building. A video report by the Berlin-based Azerbaijani news outlet Meydan showed scuffles between some of the officials and the Salaam participants, but the officials eventually left.

“We'll stay in the building till we'll see an official letter that the building won't be destroyed. We need to stick together to save our heritage. Please join us for the gathering, bring food, water and music instruments. NO ALCOHOL. Lets have fun and protect our history!” Salaam wrote on its Facebook page on May 6.

With the dispute, the temple became the latest flashpoint in a series of disputes over historic buildings in Baku, with many residents protesting what they see as a disregard by the authorities for the city’s history in their zeal to create new development.

“We knew that the building was about to be destroyed; that’s why we rented it and turned into a public space and tried to increase its visibility so that it wouldn’t be demolished,” Huseynov said.

An earlier attempt to demolish the building was made on May 2, according to Salaam organizers. “Men representing themselves as owners of the building have entered the Molokan Temple. They attempted to cut off the electricity and to demolish the stairs to the second floor. The demolition has been postponed until June 15. Salaam Cinema will remain in the building until further notice,” according to a May 3 post on Salaam’s Facebook page.

“The particularities of Azerbaijan’s historical development, the geographical position of the country, the ethnic composition of the population created the conditions for the existence of different religions on our territory. Orthodox, Catholic, Muslim sacred architectural monuments are represented in Baku and we are proud of this, because religious tolerance is our characteristic feature and national and spiritual wealth. Therefore, I ask you to help draw attention to the unique monument of architecture,” wrote Elchin Aliyev, prominent architect, founder of Baku Architectural Club, on his Facebook page.

At the time of the May 6 confrontation, the center was hosting a workshop by Dutch documentary filmmaker Robert Rombout as part of a European Union-sponsored “Tolerance Festival.”

“This the first time that I do a workshop where they try to break up the walls around me,” Rombout told Meydan.

Government officials have denied that they intend to immediately demolish the building. “At present there is no demolition work,” Fariz Huseynov, a representative of State Service for Protection, Development and Restoration of Cultural Heritage told the BBC Azerbaijani service on May 6. “If the building is put on the list of historical monuments, it will be protected by the state. If it is listed, there will be no demolition work, even if the building is privately owned.”

This is the second recent controversy over harm to historical monuments. After news spread of new construction in Baku’s UNESCO-listed old city walls, First Vice President Mehriban Aliyeva visited the site, met with business owners and assured journalists that “not a single stone of the walls will be damaged.”

Salaam supporters appealed to Aliyeva to also intercede on behalf of the Molokan temple. “The Heydar Aliyev Foundation, which you have been leading, has helped to restore monuments, historical buildings and museums in various countries,” the group wrote on its Facebook page. “They also include historical and cultural monuments of the Muslim and Christian world… We ask you to help protect this historical and cultural monument.”