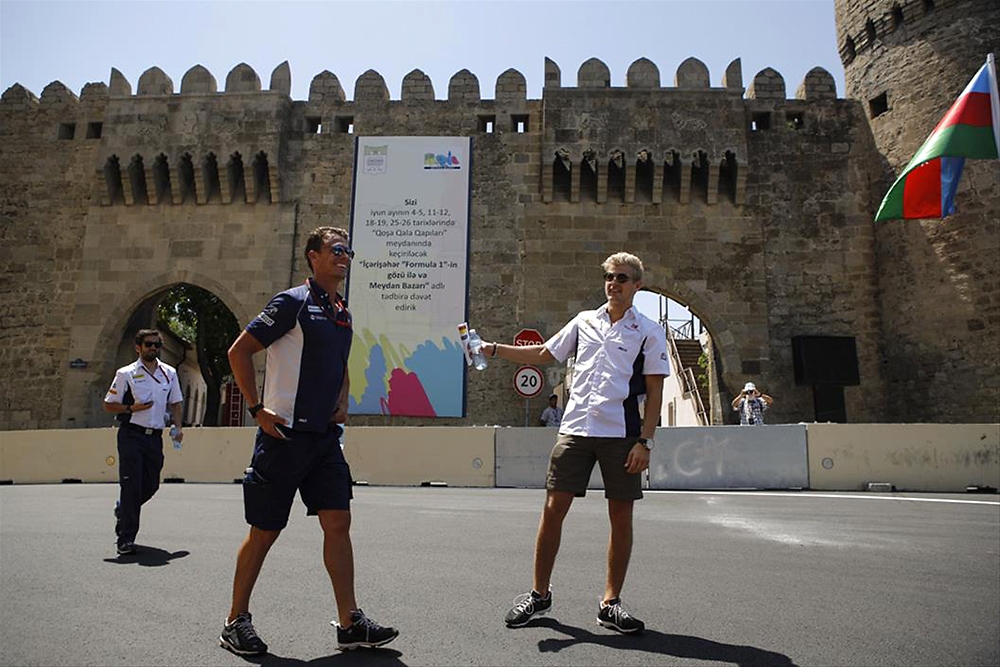 Race teams and Formula One officials tour the Baku Grand Prix racecourse along the walls of the old city. (Photos: Baku City Circuit)

It is billed as “four unforgettable days of entertainment.” But some Azerbaijanis wonder whether the most unforgettable aspect of the June 16-19 Formula One Grand Prix Europe, hosted in their capital city, Baku, will be the event’s cost.

Overall, tens of thousands of spectators are expected to crowd into downtown Baku, a city of over 2.1 million, for the event, which got underway June 16 with an entertainment extravaganza. The weekend will feature evening concerts by singers Pharrell Williams, Chris Brown and Enrique Iglesias before the race takes place on June 19.

It remains uncertain whether Azerbaijan will make or lose money on the event.

Ticket sales are the only way for host governments to make money on a race, F1 reporter Christian Sylt wrote in 2015 for Raconteur.net. Revenue from advertising, broadcast rights or corporate hospitality packages goes to the race’s rights-holder, the Formula One Group.

Arif Rahimov, the executive director of the Baku City Circuit, the company overseeing the race, is on record as telling local journalists that lower oil revenues will not affect the event’s profitability. “Aside from the state, private foundations, businessmen, travel companies and banks are taking part in organizing the race,” he said, without elaborating.

How much the government is spending on hosting the event is unknown. Minister Rahimov claims that the race will cost less than $150 million to stage. Twelve million manats ($7.9 million) allegedly were spent on construction of a six-kilometer-long racetrack through the city center, and $30 million on pit stops.

Neither Rahimov’s ministry nor the Baku City Circuit could provide a detailed cost breakdown.

Tickets for the Baku race, priced in dollars between $200 to $590, may not help cover the costs. Information about the number of tickets sold has not been released, but, in a June 12 interview with ANS TV, Rahimov pegged ticket revenue to date at just 2 million manats (over $1.3 million).

Some Baku residents consider the ticket prices high, and prefer to watch the race on TV. The Baku City Circuit, however, claims Azerbaijanis have accounted for 70 percent of recent ticket sales. The amount of purchases by government agencies is not clear.

Independent economic analyst Zohrab Ismayil asserts that the government performed no cost-benefit analysis for the race. “It is obvious that the purpose of these events is not to bring revenues to the country, but to create an image,” he said.

Indeed, image is clearly an important consideration for Azerbaijan’s president, Ilham Aliyev. “Formula One will attract great attention to our country,” he proudly declared at the June 7 Azerbaijan-Germany Economic Forum in Berlin. “Five hundred million people will watch the race [via TV and in person]. They will see not only the city circuit, but also a developed city.”

Some local firms that stand to benefit from the race appear to be those with ties to the government, Ismayil said. Indeed, the top three hotels advertised on the Baku City Circuit’s website are high-end properties that reportedly have ties to members of President Ilham Aliyev’s family. Prices at these hotels start at $500 per night; most rooms are sold out during event week.

Human rights advocates have used the race to call attention to Azerbaijan’s poor democratization record.  Authorities in Baku have denounced the awareness campaign as a smear. Meanwhile, F1 CEO Bernie Ecclestone told The Guardian that the group has no concerns about staging the race in Azerbaijan.

Road closures, in effect until June 21, have inconvenienced Baku residents. The concrete and metal barricades used to fence off the race area bring to mind “a prison,” fumed one 60-something man, angry that he cannot drive in the center of the city.

But pensioner Fazil Guliyev, 76, who lives about a kilometer away from the race area, marveled at the city center’s transformation. “This is for Azerbaijan’s glory,” he said.

Azerbaijanis riveted by, but divided on, Kazakhstan unrest