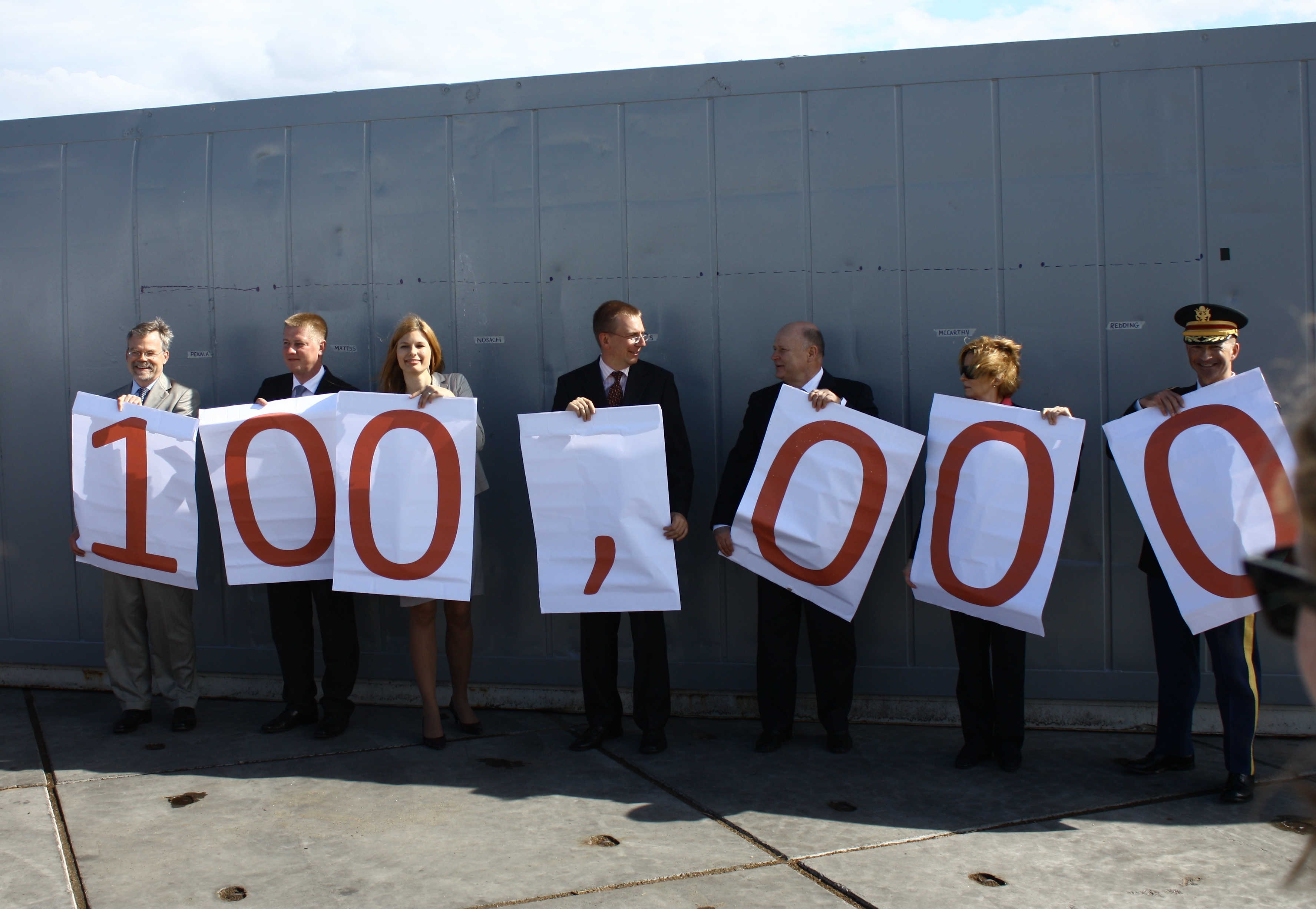 From the June 11, 2013 ceremony in Riga of U.S. and Baltic country officials celebrating the 100,000th container to pass through the Baltics en route to military forces in Afghanistan. (photos: The Bug Pit)

The U.S. embassy in Riga held a ceremony on Tuesday celebrating the 100,000th container to be shipped through the Baltic states en route to Afghanistan via the Northern Distribution Network. The ceremony featured an NDN-themed cake, speeches by top officials from all three Baltic states and a formal "christening" of the 100,000th container by U.S. Deputy Assistant Secretary of State for South and Central Asia Lynne Tracy. It spoke to the fact that unlike many of the Central Asian countries, which tend to try to keep their cooperation with the U.S. military quiet, the NATO members on the other end of the NDN -- Estonia, Latvia, and Lithuania -- are proud of their role in the NDN. The day after the ceremony, the Latvian foreign ministry held a conference devoted to the NDN and broader Eurasian economic and transportation integration. The Bug Pit was lucky to have been in Riga at the time, and the event was a terrific opportunity to learn more about how this less famous end of the NDN works. And one of the major messages of the conference was how the Baltic countries are hoping to use their role in the NDN to deepen ties with their former compatriots in Russia and Central Asian countries. At the ceremony, Latvia's minister of transportation Anrijs Matiss said that the NDN had "revitalized" relations with Russia and Central Asia, and that meetings now between Latvia and those ex-Soviet states now have at the top of their agenda the NDN. It's "built a mutual trust with our regional partners," he said. Latvia's relations with Central Asia are still not especially strong, but officials hope that the NDN will pave the way for greater commercial transportation business. Latvian officials noted that about five percent of cargo handled by Riga's port is going to or coming from Kazakhstan, a number that Latvians hope to increase. Latvia also has focused on transportation in its contributions to the U.S./NATO effort in Afghanistan, by training Afghanistan transportation officials in Latvia. U.S. officials hope that the Baltic countries can act as a sort of bridge between Europe/NATO and Central Asia, building on their common history as former members of the Soviet Union. Fred Starr, the American Central Asia expert who gave the concluding speech at the conference, said that the Baltics were developing into a "window" between Europe and the Caucasus/Central Asia region. "This holds great promise and will be welcomed on all sides," he said. Informal conversations, naturally, revealed another side of this development. One Latvian government official admitted to The Bug Pit that "the Baltics are more interested in Central Asia than they are in us." In choosing transport routes, "they have a lot of options" and so hold the best cards. But he said that what the Baltics offer is a certain amount of prestige: presidents of Central Asia can visit the Baltic countries and be received at the presidential level, by an EU and NATO member, who won't give them a hard time about human rights. Turkmenistan's president Gurbanguly Berdymukhammedov visited Riga last year, and his counterparts in Kazakhstan and Uzbekistan also have visited. One Latvian think tank scholar told me -- and where have you heard this before? -- that while Baltic states' interactions with Central Asia tended to be about democratization, now they are focused on economics and security. About 60 percent of NDN traffic through the Baltics goes through Latvia, with about 20 percent going each to Estonia and Lithuania. Riga's port makes the most financial sense, as it's best integrated with the Russian routes heading further east, but U.S. officials want to spread out the business to repay the contributions of Estonia and Lithuania, as well. And while they couldn't give specific figures, U.S. officials said that the lion's share of NDN traffic starts in the Baltics, but that that share is decreasing at the expense of the Caucasus route. But while Latvia's Foreign Minister Edgars Rinkevics said at the port ceremony that he hoped there would ultimately be "200,000, 300,000, even a million" containers shipped through the Baltics, the amount of cargo headed toward Afghanistan has already started to taper off. The retrograde transit, which has just begun, could be a different game, and so the Baltics are going to be competing hard to get a good portion of that business, as well.