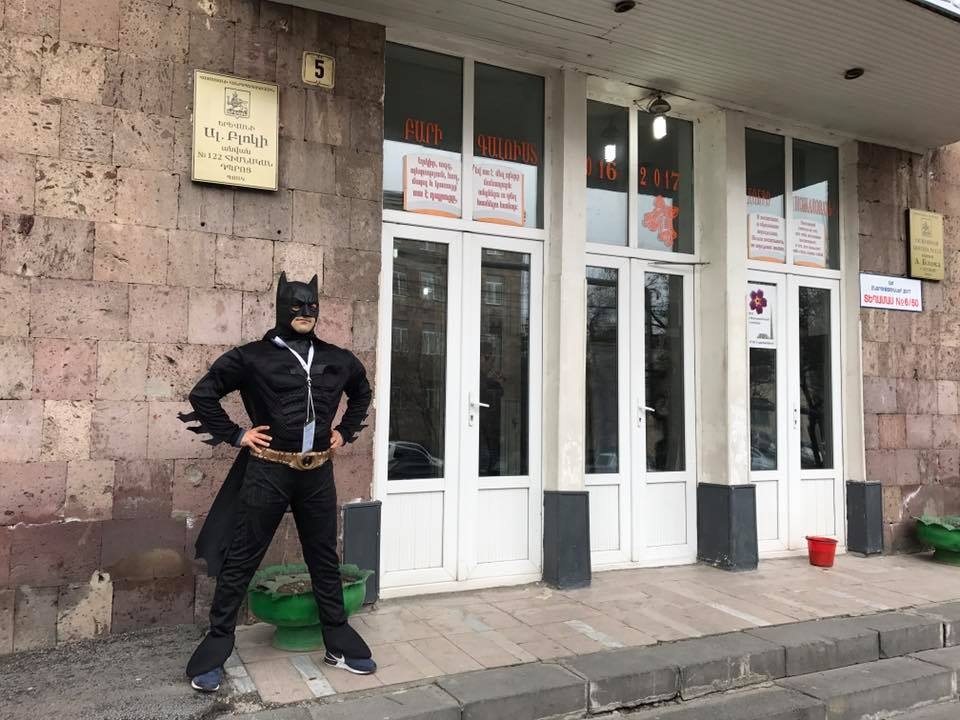 Batman on April 2 set aside the cares of Gotham City and descended on Yerevan to help guard democracy amidst a parliamentary election that could prove a turning point for Armenia. With his cape flying behind him, the Dark Knight sashayed about the Armenian capital of one-plus million, keeping an eye out for any would-be Jokers.

Sighted standing guard outside polling stations and engaging with voters, the superhero quickly overshadowed more mundane international election watchdogs such as the Organization for Security and Cooperation in Europe (OSCE).

But this was no ordinary election -- it marked an historic switchover to a new, parliamentary system of governance – and, as such, it called for extraordinary observers. So, Batman made his way into an unspecified number of Yerevan polling stations to “deter fraud,” dismissing objections from startled election officials. He was also seen making phone calls and taking photos with tourists from India and Dubai.

The Armenian Batman eventually revealed himself as comedian Narek Margaryan of ArmComedy, a satirical show that makes its job “to restore sanity and embarrass bad governance in Armenia.” Margaryan’s co-host and a potential Robin, Sergey Sargsyan, is positive that Batman’s mission was a success.  “We believe that he did scare the hell out of some evil-minded provocateurs,” Sargsyan told Tamada Tales.

“Generally, Batman was received well and was even urged to [formally] register as an observer, which he did,” Sargsyan happily reported. That said, he was reluctant to reveal the Armenian Batman’s personal preferences in the vote, in which the incumbent Republican Party appears to have prevailed with about 49 percent of voter support, according to early results.

International observers said that the overall election was in the democratic ballpark, but tainted by cases of vote-buying and intimidation, and also by a lack of public trust in the electoral process. The OSCE observation mission called on the authorities to “help transform the country’s political culture” as it transitions from a presidential mode of governance.

In a pre-vote chat with the OSCE, President Serzh Sargsyan gave the nod to building voter trust, and called on observers to keep their findings “unbiased.”

Batman has not called a press-conference to provide details of his own observations – and certainly has had no meeting with the president -- but ArmComedy said that more superheroes will appear soon to fight for the democratic cause in Armenia.

The big question about Armenian democracy is if shifting power away from the president to the parliament and prime minister is President Sargsyan’s way to extend his political life. With his Republican Party set to retain sway over the 101-seat-minimum legislature, Sargsyan could prolong his hold on power by becoming prime minister after his presidential term expires in 2018. Regional leaders, such as Turkey’s Recep Tayyip Erdoğan and Russia’s Vladimir Putin, have all engaged in such games.

President Sargsyan, however, claims the change is only about building a European-style democracy.

If, in fact, that proves not to be the case, citizens can always send a bat-signal into the sky over Armenia.