Behind blockbuster Armenia! exhibit, the hand of the old regime

The new government has embraced the New York show while underplaying the role played by its political enemies. 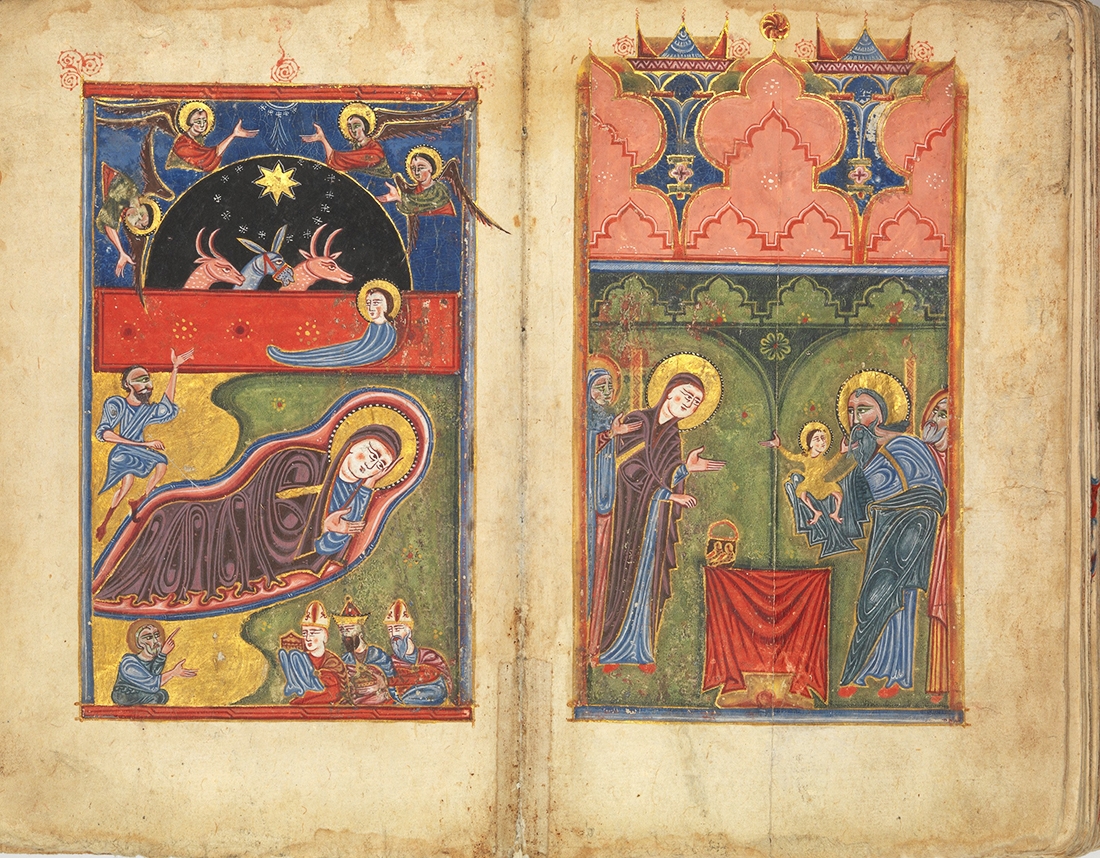 A piece from the Met exhibit: The Nativity / Presentation in the Temple, from Four Gospels in Armenian, 1434/35 (courtesy Met Museum)

2018 was a year full of highlights for Armenia.

Last year saw Armenians overthrow their long-hated government and replace it with one led by the charismatic Nikol Pashinyan. The Economist named Armenia “country of the year. The Smithsonian Institution hosted an impressive festival of Armenian culture in Washington. And to cap it off, in September New York’s Metropolitan Museum of Art opened a landmark exhibit showcasing centuries of Armenian art: “Armenia!”

The show has been almost uniformly praised. But behind the scenes, its origins have stoked evident embarrassment. Pashinyan’s government is distancing itself from the man who set it in motion: Vigen Sargsyan, a long-time high-ranking member of the former government.

In an interview with Eurasianet, Sargsyan said that he pitched the idea of the show in September 2015, when he was chief of staff to then-president Serzh Sargsyan (the two are not related). Vigen Sargsyan’s brief for two successive administrations included cultural projects, and he coordinated major exhibitions of Armenian art abroad, including “Armenia Sacra” at Paris’s Louvre in 2007 and a 2012 show in Venice.

During a September 2015 presidential visit to New York, he started thinking about a similarly large-scale exhibit in the United States. “And my eye fell on the Metropolitan Museum,” Sargsyan said.

Still in New York, Sargsyan shared his idea with Aso Tavitian, an Armenian-American tech entrepreneur and large donor to cultural and art institutions including the Met and New York’s Metropolitan Opera.

Tavitian made some calls and a meeting was scheduled for 7 the next morning with officials from the Met including Helen Evans, a curator specializing in Armenian art. Eventually the Met agreed to work on an exhibition.

“Dr. Evans wrote her dissertation on Armenian manuscripts of Cilicia nearly 30 years ago (in 1990), and has dreamed of organizing an Armenian exhibition at The Met since she was hired by the Museum in 1991,” the statement, which was provided to Eurasianet, said. “The necessary elements finally came together in 2015.”

When the exhibit eventually opened months after the “Velvet Revolution” in Yerevan, the new authorities embraced it.

A few days before the opening Lilit Makunts, the scholar and activist who had been recently appointed Armenia’s minister of culture, presided over a press conference and thanked, among others, the U.S.-based Hagop Kevorkian Fund as the main sponsor of the show.

After her initial remarks, the Reverend Asoghik Karapetyan, an Armenian Church representative, took the microphone and stressed Sargsyan’s role in bringing the exhibit to fruition.

When a reporter followed up to ask Makunts whether a figure from the old regime – typically painted as irredeemably venal by the new authorities – was indeed behind the show, she professed ignorance. “If Father Asoghik says so… I don’t know all the details about whose initiative it had been,” Makunts said.

And when Pashinyan visited the exhibition shortly after its opening, he thanked a long list of those who helped make the show a reality: the curator, museum officials, donors, and Armenian church officials. Sargsyan again went unmentioned.

Sargsyan said that he was invited to the opening but couldn’t attend due to work commitments; he remains deputy chairman of the former ruling Republican Party of Armenia. He brushed off questions about credit for the exhibit.

“The fact that this exhibition took place makes me the happiest man,” he said.

Armenia!, which closed in January, showcased a wide range of Armenian medieval art and liturgical objects, from khachkar tombstones to manuscripts and jewelry from around the region. It even included The Holy Lance of Geghard, the spear believed to be used by a Roman soldier during the crucifixion of Jesus Christ and subsequently held at the monastery by that name in Armenia.

The exhibit enjoyed good press, with The New York Times calling it a “great show,” and similarly glowing reviews in the New York Review of Books, The Wall Street Journal and The Washington Post. The majority opinion among Armenians was equally favorable, with substantial excitement about such a major Armenia-themed event in one of the world’s most prominent art institutions.

But the exhibition inevitably left some Armenians dissatisfied.

Claude Mutafian, a prominent French-Armenian historian, penned a review calling the show “a complete failure, unworthy of an institution as famous as the Metropolitan Museum of Art.”

Mutafian presented a long list of what he saw as the exhibit’s shortcomings, including its failure to address head-on the destruction of some of Armenia’s cultural patrimony by Turkey and Azerbaijan. Most importantly, Mutafian claimed, was that the show ignored Armenia’s pre-Christian past and thus framed Armenia as inseparable from Christianity. “It would have been fair to call the exhibition ‘Christian Armenia!’ and briefly explain with an introductory panel that Armenia did exist long before, and that Christianization opened a new artistic era,” Mutafian wrote.

The focus on Armenia’s Christian culture is in part explained by the fact that little material evidence has survived from the nation’s pagan past. But the Armenian church – which also frames Armenia’s history in this way – was heavily involved in organizing the show.

Many items in the exhibit came from the Armenian Church and its Holy See of Etchmiadzin, See of Cilicia and Patriarchate of Jerusalem (in addition to secular museums and collections.) The church also helped raise funds, and Evans gave a presentation about the show at the diocesan center in New York. Pashinyan visited the show together with Catholicos Karekin II, the head of the Armenian Apostolic Church. A top Armenian church official in the United States even blessed the exhibit.

Whatever its shortcomings, most Armenians praised the exhibit.

“The quality and the range of materials that Helen Evans was able to get in one place was amazing,” Heghnar Zeitlian Watenpaugh, a professor of art history at the University of California, Davis, told Eurasianet. She called the show “a once in a lifetime opportunity” to see otherwise rarely exhibited objects. “In a couple of years, the controversies will be forgotten but the exhibition and catalogue will be remembered.”