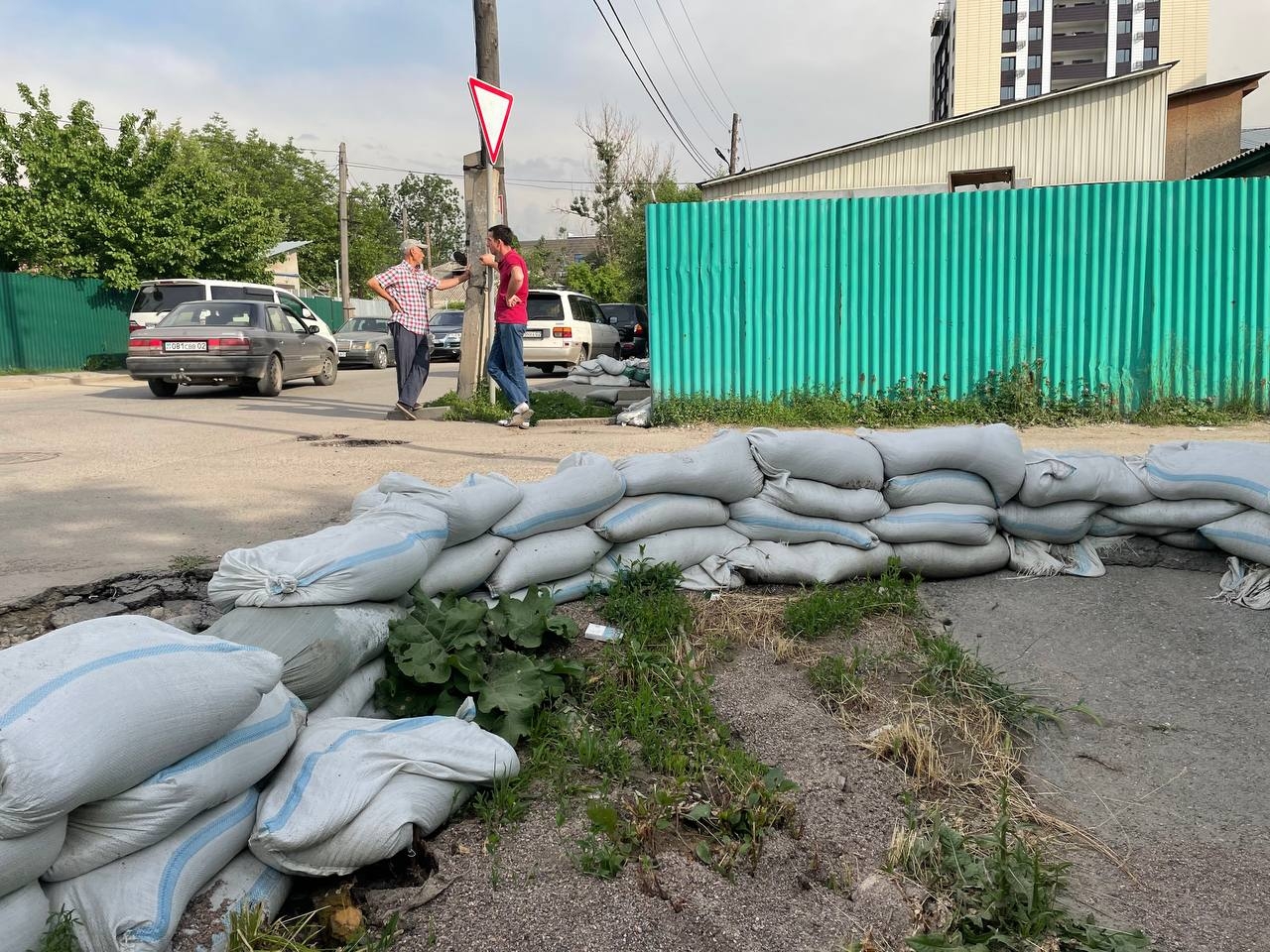 Sandbags outside the home of Yuri Pivovarov a week after the May flood. (Meruyert Kalymzhanova)

Tatyana Kucherova looks out her kitchen window and imagines she’s in Venice. But her neighbors wield shovels, not gondoliers’ oars.

She lives in Almaty, landlocked Kazakhstan’s largest and most developed city, where residents are barricading their homes from the rising waters.

A downpour last month flooded yards, streets and underground passages in parts of the city. ­According to Kazhydromet, the state meteorological agency, a month’s worth of rain fell in just 90 minutes on May 11.

In the district of Rabochiy, where single-family houses are surrounded by small yards, residents took to the streets with pool toys.

Since the late 19th century, when Almaty was founded as the Russian outpost of Verny, residents have relied on a network of drainage canals (“aryk”) that line the roads. The ditches allow cooling water to run from the mountains through the city; they also drain rain and melting snow. Over the last few decades, however, many aryks have filled with silt and garbage, victims of a pervading post-Soviet neglect. Some new roads do not have the ditches; others are no longer connected, said Dias Maratuly, an expert with Urban Forum Kazakhstan, a research and advocacy outfit.

“There are places where ditches are simply interrupted. In other places, they are different sizes. As a result, we see that storm sewers fail to cope. During heavy rains they are overloaded and filled with water. That is why the lower part of the city often drowns during heavy rains,” said Maratuly.

Even worse, these lower parts of Almaty – that is, in the northeast – lack canals to collect runoff from the ditches. The result is flooding in areas like Rabochiy.

Kucherova has been living in Rabochiy for four years. Each year, the summer rains fill her yard and enter her home.

“It is impossible to live. Water rises above the foundation and enters the house,” Kucherova explained. “In places where there was water there are now spots … fungus and mold.”

“If the weather forecast says rain, we immediately take shovels in hand to barricade our houses” with sandbags, she continued.

Her neighbor Dmitry Kabachenko voices frustration with the local authorities.

“I don't know if they are trying to solve it. They don't tell us, so we don't know what's going on. But the fact is that we are constantly drowning,” said Kabachenko.

The word “drowning” rings out frequently in Rabochiy. Yuri Pivovarov's yard was completely flooded on May 11. After a call to the emergency services, workers from the akimat (city hall) brought sandbags.

“The akimat promised me that in a month work on the construction of ditches would begin. I would love to believe it, but a month later, nothing has changed. It's hard to believe that things will change.”

The local government does acknowledge a problem. According to official statistics collected last year, 27 percent of the 1525-kilometer aryk network requires repairs or reconstruction; that’s 424 kilometers.

Repairs were supposed to begin last year, but that hasn’t happened.

On April 22, the deputy head of Almaty’s Green Economy Department, Serik Adilbayev, told local media that the study last year had not considered where the water from these restored aryks would go.

There are 16 collection canals in Almaty, designed to catch accumulated water from the aryks. But of these, only four work properly, as they are relatively new, built in 2013. The remaining 12 are in poor condition and are quickly overwhelmed in heavy rain. The study “did not provide for the restoration of collectors and the connection of ditches with them,” Adilbayev said.

Serik Suyimbaev opened his restaurant Nurym in Rabochiy region six years ago. The location has been nothing but trouble.

All this time, Suyimbaev has had to cart sandbags around to protect the restaurant, moving the eyesores after the flood waters abate. He says he’s bearing the akimat’s “burden of responsibility.”

“Last night I spent the whole night guarding the restaurant. And so it is after every downpour. I stay here overnight and watch,” Suyimbaev explained on May 12. When the water reaches his parking lot, he fetches 50-kilogram sandbags. After the rains, waterlogged, they weigh 70 to 80 kilos, “but I carry them alone, to and fro, breaking my back.”

The canal near his property is too small to handle the torrents. It’s also clogged with garbage. Last fall, when the water had nowhere to go, it flooded his basement.

“That night I stayed at the restaurant, the rain was getting heavier. I decided to go down to the basement to check whether it was flooded. Before even turning on the light, I was knee-deep in water and seriously frightened because all the equipment was connected to the power source. God saved me,” he recalled. “But the damage was huge. All equipment, documents, and [cooking] implements remained underwater. I had to restore all this and do a complete renovation of the basement.”

Suyimbaev appealed to the akimat of Almaty’s Zetysu region, where Rabochiy is situated. Akim Gulnar Kokebaeva, the district head, came to see the damage herself in the autumn and promised to build a ditch before the end of May.

That hasn’t happened. We sent a request for information to Kokebaeva’s office, which replied that it had allocated funds to begin work in the fourth quarter of 2022.

“I wouldn't talk about it at all, but I'm tired. I did not invest millions into this restaurant to suffer from the rain,” Suyimbaev said. “One of the officials told me: ‘Yeah, why don’t you make a ditch for yourself, you have been suffering for six years.’ Like I have to do their job?”