Behind Uzbekistan’s Bus Tragedy, a Story of Grinding Despair

Only five people onboard were able to jump for safety out of the vehicle, leaving 52 migrant laborers dead. 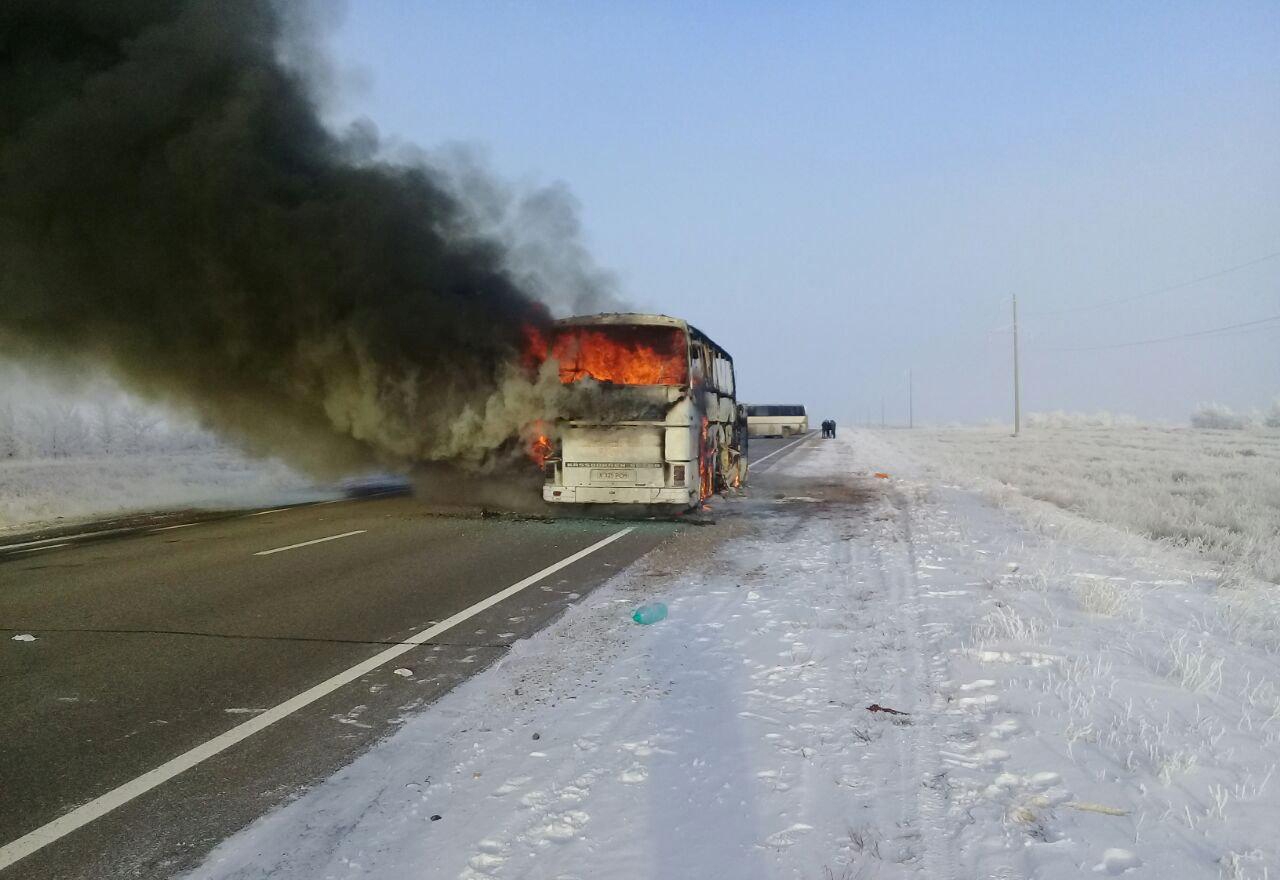 The bus carrying Uzbek migrant workers burst into flames along a highway in the Aktobe Region in northwestern Kazakhstan. Only five people on board were able to jump to safety; 52 people were killed. (Handout photo from Kazakhstan's Emergency Situations Ministry)

A tiring, uncomfortable bus trip to Russia ended in tragedy for 52 migrants from Uzbekistan this week when the vehicle in which they were traveling burst into flames.

Only five people onboard were able to jump for safety out of the vehicle, which caught fire along a highway in the Aktobe Region in northwestern Kazakhstan.

Countless thousands perform the same trip year in, year out, forced to find the cheapest way possible of reaching Russia, where they will do menial work for paltry salaries.

Uzbek President Shavkat Mirziyoyev was swift in reacting to the January 18 tragedy, issuing a statement of condolence that was read out by anchors on the Uzbekiston-24 rolling news television channel. He then ordered the setting up of a government commission to be headed by the prime minister to investigate the causes of the accident and to establish the identity of all the victims.

Investigators have said that early indications are that a short circuit sparked the blaze, but discovering the precise mechanics of what led to these gruesome deaths is only part of a bigger picture.

The alarm about the continuing desperate plight of migrant laborers was sounded again on the eve of the tragedy by Agzam Abdullayev, a 51-year-old businessman from the city of Namangan.

Abdullayev left Uzbekistan for Moscow around 14 years ago to work as a doctor. He then moved to the city of Kazan, 800 kilometers to the east of the Russian capital, where he went into business. Lately, he has turned his efforts to giving advice online to fellow countrymen planning to go to Russia and lobbying their interests with the government in Tashkent.

“Migrants travel from Tashkent to Kazan by bus for 5,000 rubles ($87). The cost of a plane ticket is 17,000 rubles ($300). A train is 10,000 rubles ($175). These are laborers, people with few skills. Entrepreneurs or anybody with some money would not subject themselves to such torture,” Abdullayev wrote in a public Facebook post on January 17.

Despite the lip service being paid to greater openness under Mirziyoyev, the government continues to cling to implausible data showing domestic unemployment at under six percent. In reality, millions of Uzbeks have been driven abroad by economic necessity to make monthly salaries abroad, mainly in Russia, in the low hundreds of dollars.

One of the main issues highlighted by Abdullayev was the expense and complication of obtaining a Russian work permit.

“Russia’s coffers get a lot of revenue from the labor of migrants. Can’t Uzbekistan cut some deal to reduce the cost of work permits and the other paperwork needed to legalize migration status?” Abdullayev asked.

It is that bureaucracy, and the high cost of compliance, that compels so many to resort to the bus.

As people who have done it before explain, the trip takes around three days.

A crucial role is played by a chain of “guides” who navigate passengers through the voyage. The first, back in Uzbekistan, musters anywhere between 50 and 60 people wishing to make the trip and ferries them to the starting point just across the border. Because seasoned guides are familiar with the frontier personnel, they can usually breeze past the long lines and help avoid attempts to extort large bribes. Uzbek customs officials are especially notorious for creating difficulties over the slightest discrepancies in declarations.

For those killed this week, their long voyage began in the village of Zhibek Zholy (Silk Road) in the South Kazakhstan region. The men climbed aboard Kazakhstan-registered double-decker bus and, according to the police, piled on large amounts of luggage. The bus was a German Kässbohrer-Setra model produced in 1989 and was running passengers without the required license, according to one media account. A vehicle safety test was due two years ago.

At this point in the voyage, a Kazakh guide would have taken over, as is customary, to help negotiate potential difficulties in Kazakhstan, and with the crossing into Russia.

Khurshid Berdiyev, who has taken the ride to and from Moscow on two occasions, explained how experienced guides and drivers are indispensable, because they can help avoid the problems that tend to arise in airports for those whose documents are not entirely in order.

“If Russian passport control or police at the airport don’t like the look of you, they can have you deported. Checks on the overland crossings are not so strict. The border officials on the Russian and Kazakh side have already been bought off by the drivers bringing in the Uzbek migrant laborers,” Berdiyev told Eurasianet.org.

In summer, passengers bake in the sealed tin can of a bus. Air conditioners typically don’t work. In winter, it is the cold that’s the problem. Temperatures on the Kazakh steppe have dropped to around below 20 degrees Celsius these days.

Akbar Suyunov, a painter and decorator from Tashkent, recalls taking the bus to Moscow in November 2013.

“My friends told me I could get to Moscow for $100. I happily crossed the border and sat on a bus full of my countrymen. The trip took three days and it was real hell. The drivers — they were from Kazakhstan — talked to us like we were convicts. If we made any complaints, they would threaten to throw us out. But it was November and nobody wanted to die of cold in the Kazakh steppe,” Suyunov told Eurasianet.

In the recent tragedy, the bus was making its way through Kazakhstan’s Aktobe Region in the middle of the morning on January 18 when went up in flames around 1,200 kilometers into the drive. Details provided so far by medical examiners are nightmarish.

From initial information provided by police, it appears that there was little oxygen inside the bus — presumably a combination of poor ventilation, overcrowding and the early, possibly undetected stage of the fire — so the moment a door was opened, the interior was consumed by a sudden fireball. Officials said some may have passed out from toxic fumes before the explosion. The head of the Aktobe regional health department, Aset Kaliyev, said at least some deaths were caused by exposure to the flames, rather than suffocation.

The accident has generated an outpouring of anguished reactions inside Uzbekistan, with many demanding Mirziyoyev declare a day of mourning, which had still not been called as of Friday evening.

This is no isolated incident. In October, a bus carrying a group comprising mainly Uzbek workers in the Vladimir region in Russia was struck by a train at a railway crossing. Of the 55 passengers onboard, 17 were killed. Two of the fatalities were children.

“Yet another tragedy where my fellow compatriots are losing their lives,” Umida Akhmedova, an internationally celebrated photographer, wrote on her Facebook page. “How can we continue to laugh and enjoy life when this keeps happening to our fellow citizens, to these young people?"