The EU and multilateral lenders are studying the project. 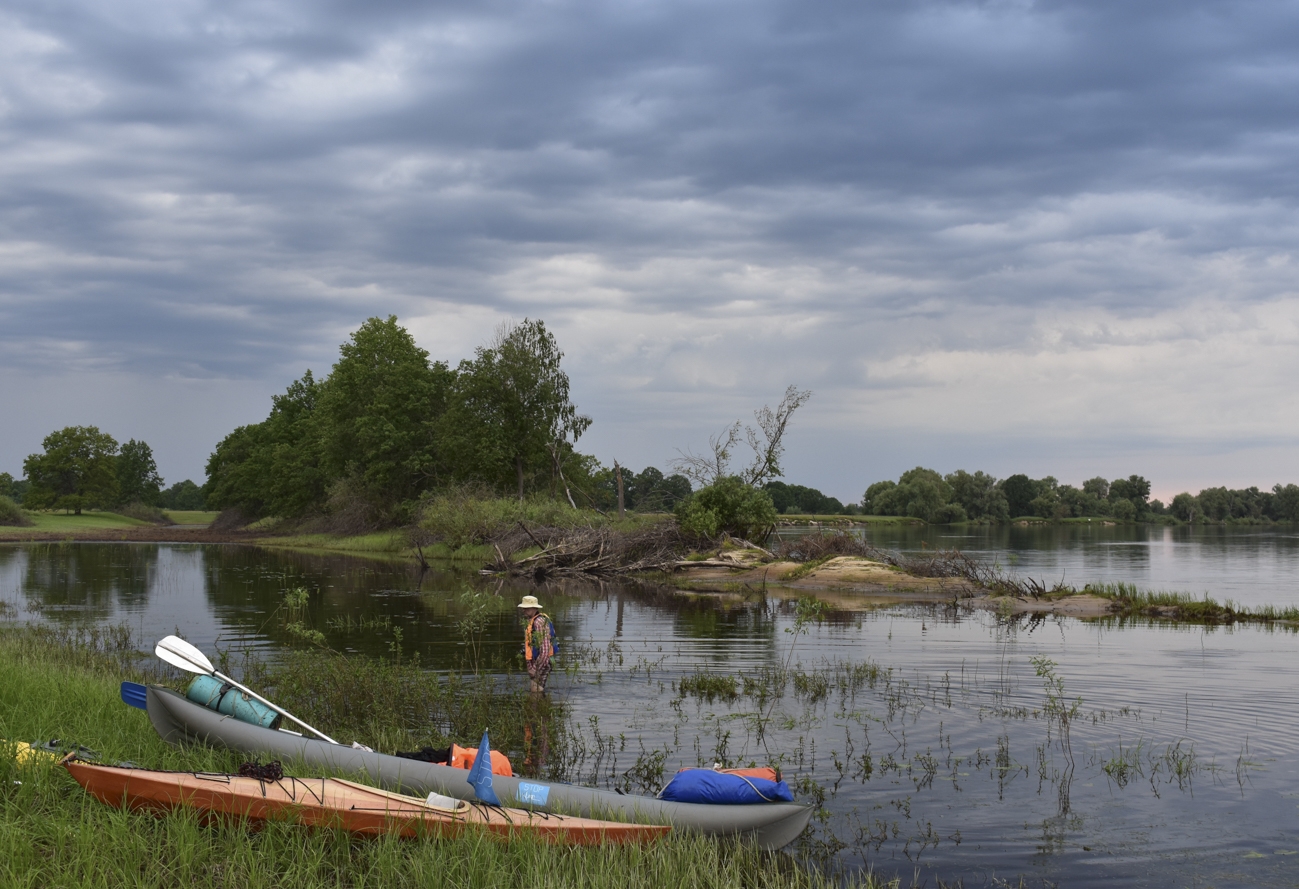 Wading in the Pripyat River in Belarus. (All photos © Tom Allan)

Swarms of mosquitoes and plump, shiny flies rise from the undergrowth as a group of protesters drag their canoes onto the low banks of the Pripyat river in Belarus. The group – a coalition of environmental activists, fishermen and locals – are united in opposition to a project which could, in a few years’ time, turn this meandering river into an international shipping route known as the E40 waterway.

The aim of the E40 project is an ancient one: to link the Black Sea with the Baltic, creating a navigable passage through Eastern Europe. The 1250-mile channel would run from Kherson in Ukraine, through Belarus, to Gdansk on Poland’s Baltic coast – a passage that Viking longships used, in part, on their way to Constantinople to connect with the Silk Road. The three national governments established a cross-border commission in 2007 to investigate a suitable route, backed with 900,000 euros of European Union funding. It estimates the modern waterway could carry up to 6 million metric tons of cargo a year.

Landlocked Belarus is keen to gain access to the sea. The country uses Latvian and Lithuanian ports to exports products such as oil and potash, though it is under pressure from Moscow to re-route this trade to Russia’s Baltic ports. A publicly available summary of the E40 commission’s feasibility study states that a minimum water depth of 2.5 meters would be needed along the whole route. Rivers would be dredged; locks, sluices and reservoirs would be built to retain water through the summer.

Conservationists believe this work would permanently alter the Pripyat river, which – almost uniquely in Europe – still flows in a near-natural state along much of its course. “The E40 would go through 11 nature reserves in Belarus,” explained Olya Kaskevich, while seated beside a campfire kindled to cook dinner for the 50 canoe protestors assembled this summer. Kaskevich is the director of Bahna, the organization behind this protest and a major partner in the Stop E40 campaign. Since co-founding the NGO in 2013, she has become one of the most prominent conservation voices in Belarus, a country with little history of environmentalism. Organizing protests in a state known for its suppression of dissent carries risks: Several people were questioned by the KGB (as Belarus’ secret service is still known) following a similar demonstration last year.

“I believe it’s totally possible to make the river navigable, but at the same time not to harm nature,” E40 commission secretary Andrei Rekesh told Eurasianet in his wood-paneled office in the small city of Pinsk. “You have to understand, we are not trying to create some Panama Canal in Belarus,” he continued, adding that emissions per kilometer are lower with water transport than with road or rail, and that the project is in line with the EU’s aim of increasing the use of inland waterways. “European practice” should be followed for the construction work, he said. “We must look to the experience the Dutch and the Germans have of such projects.”

But the German experience of river regulation has not always been positive. “When you look at other rivers that have been channelized to allow shipping, like the Rhine or the Danube, the effect is to speed up the flow, deepen the river and change the vegetation, surrounding habitat, climate and groundwater,” said Zoltan Kuhn from the Frankfurt Zoological Society. More dramatic still would be the impact of the work in Poland, where a 100-mile bypass canal would be built to avoid a series of protected areas along the Bug river – the most expensive feature of the E40 project. The Polish partner of global non-profit BirdLife International warns that this could reduce the Bug’s water flow to a trickle.

There are also questions about the scheme’s claimed economic benefits. In April, Belarus’s Business Union of Entrepreneurs and Employers published an open letter calling on the government to abandon the E40 project. It argued that water transport is only suitable for heavy, bulky goods and only a small number of businesses benefit from it. As the waterway would not be wide or deep enough for ocean-going container ships, the need for costly unloading and reloading onto river vessels could limit the route’s appeal to international shipping companies.

Back at the protest the next morning, bags are loaded into creaking skin-on-frame canoes and the flotilla slips onto the peaty river. Lush meadows and stands of oak trees stretch away from its banks; in spring the floodplain can be 18 miles wide. Turov meadow, located on a bend in the Pripyat, is one of Europe’s most important sites for wading birds, used as a stopover by 1.5 million spring migrants, including the ruff and bar-tailed godwit. The river is also home to the globally threatened aquatic warbler, and BirdLife Poland estimates that three quarters of the world’s population of the bird is directly threatened by the E40.

The Pripyat flows from Belarus into Ukraine and joins the Dnieper, Ukraine’s largest river, in a sprawling expanse of forest and reeds. This area lies within the Chernobyl Exclusion Zone, and the Stop E40 campaign argues that dredging work would disturb silt particles contaminated with a radioactive isotope, caesium-137, that settled there following the 1986 nuclear disaster. They fear the particles could be carried into the Kyiv reservoir, the drinking-water supply for Ukraine’s capital of some 2.8 million people.

Not so, says Oleg Voitsekhovych, head of the Environment Radiation Monitoring Department at the Ukrainian Hydrometeorological Institute. Most of the riverbed is covered in quartz sands, he explained, which cannot become contaminated by radiation. According to the institute’s research, contaminated particles have been washed onto the bed of the Kyiv reservoir and covered by clean deposits, which prevent contamination spreading. The siltiest, most contaminated particles settle in the deepest parts of the river, said Voitsekhovych, where dredging will not take place.

But Jan Haverkamp, a nuclear energy expert for Greenpeace in Eastern Europe who has worked extensively in the Chernobyl Zone, believes this is an oversimplification. “The Pripyat is not […] a homogeneous stream based on sand, nor is all silt washed to the Kyiv reservoir,” he told Eurasianet. “During flooding season, fresh silt is washed into the Pripyat, in bends, side-pools and floodplains. Where this may not be traceable in Kyiv drinking water, it may cause a concentration [of radioactive isotopes] in local food chains,” he adds.

The Ukrainian government is keen to revive the country’s water transport system, which has sunk into disrepair since the collapse of the Soviet Union. A joint Belarusian-Ukrainian roadmap was signed last December, pledging to develop the nations’ waterways. Alexander Urbansky, member of the Ukrainian Rada (parliament), head of the state River and Maritime Institute, and the former director of Ismail shipyard, told Eurasianet the E40 project is an important step: “It is quite obvious – more trade corridors, more ships, more money.”

So far, the E40 project has not secured funding. According to the commission, work on the Ukrainian part of the route would cost an estimated 31 million euros and on the Belarusian section between 96 and 171 million euros. In Poland the projected bill is much larger: 11.9 billion euros. The European Investment Bank and European Bank for Reconstruction and Development both told Eurasianet that, should they finance the project, they would first assess its environmental and social impacts.

Urbansky says that the E40 waterway has been discussed with Chinese officials and could, he believes, form part of China’s Belt and Road Initiative, also known as the One Belt, One Road. Both Ukraine and Belarus have recently received significant Chinese promises, including $2 billion for a new Kyiv metro line. Yet Beijing has also recently shown hesitance in Ukraine.

Further legislation would also be needed if the project is to go ahead. Ukraine’s draft law 2475a on Inland Water Transport proposes dredging the Dnieper to a depth of 3 meters to allow larger barges to use the river, but has been languishing in the Rada for almost four years, mired in a disagreement over the collection of a “river tax” by the Finance Ministry. The Ukrainian barge fleet is in a dilapidated state and the labor needed to repair it has dwindled as a result of emigration. But Urbansky is optimistic a compromise will be reached when the bill is resubmitted in the autumn. Another supporter of the bill is Andrey Vadatursky, son of the director of Nibulon, one of Ukraine’s largest grain producers. Nibulon exports up to 4.65 million metric tons of agricultural products a year and recently completed two new terminals on the Dnieper for shipping grain overseas. Vadatursky did not respond to requests for comment.

Back in Belarus, the protesters continue to speak up before the E40 project gathers momentum. “It is much safer to criticize now, before the state has spent any money,” BirdLife Belarus director Alexandre Vintchevski told Eurasianet after the protest. “Most of the work [in Belarus] would be done by state companies – they are difficult to criticize, because then you are going against your government.”

“We are not radical protectionists,” he continued. “We understand the need for development, and that natural interests need to be balanced with economic interests. But all the information we have on this project is that it’s bad for nature and bad for the economy, both.” And if it does go ahead? Vintchevski sank back in his plastic chair. “You know with the E40, once it’s done, there is no turning back. It is forever.”

Tom Allan is a UK-based freelance writer and journalist. The author's research was supported by a Biodiversity Media Initiative grant from the Earth Journalism Network.