Beset by political crisis, Georgian government strikes back at opposition

After being weakened by massive protests, Georgia’s ruling party has regained its footing and has taken several steps to neutralize government critics. 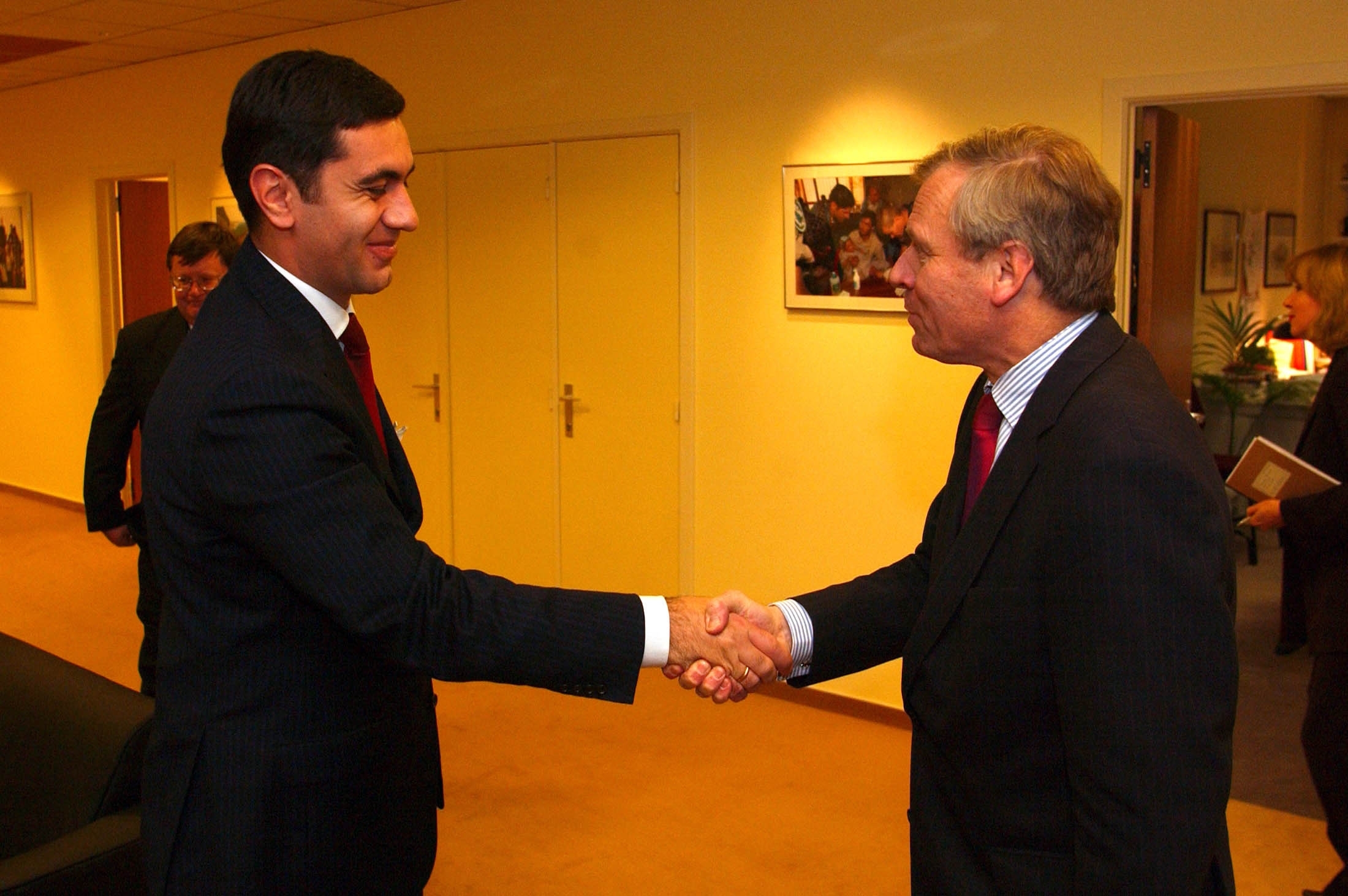 Then-defense minister Irakli Okruashvili on a visit to NATO in 2005. Now an opposition figure, he has been arrested and his allies claim it was politically motivated. (photo: NATO)

The last few weeks in Tbilisi have seen the biggest political storm of the Georgian Dream party’s seven-year-long rule: Massive anti-government protests and clashes with police in June have badly shaken the party’s standing as elections loom next year.

But in the last week GD and its billionaire chairman, Bidzina Ivanishvili, have appeared to find their footing again and are striking back. After a European court ruled that the transfer of a key opposition news channel to a government-friendly owner could go ahead, one prominent opposition figure was arrested and another was forbidden from leaving the country.

Following the government’s hat trick, one journalist and commentator quipped on Facebook: “The big boss is on a roll.”

On July 27, a court ordered well-known banker Mamuka Khazaradze and his deputy Badri Japaridze to stay in the country pending trial on charges of fraud. Khazaradze, the founder of one of the largest Georgian banks, TBC, has been engaged in a bitter dispute with the authorities and recently established a new political group. Following his July 27 hearing, he said that “the country is run by one man,” an apparent reference to Ivanishvili.

Two days before that, police arrested Irakli Okruashvili, a former defense minister and current leader of a small opposition group. Prosecutors said he was accused of inciting riots and attempting to storm the parliament building on June 20, the night of the protests that precipitated the current crisis. By way of evidence, police released video of Okruashvili in the middle of the crowd of protesters tussling with riot police.

Okruashvili’s lawyers, as well as critics of the government, believe that his arrest is instead related the ongoing battle to control Rustavi2, a TV network that is the most powerful opposition voice in the country.

Once the right-hand man of former president Mikheil Saakashvili, Okruashvili has since lived many political lives until being reincarnated this year as a leader of a new opposition group, Victorious Georgia. He is now among several people queuing up to claim ownership of Rustavi2, which courts recently gave back to the station’s former owner – and Okruashvili’s erstwhile associate – businessman Kibar Khalvashi.

Rustavi2 changed hands like a hot potato during Saakashvili’s tenure, from 2004 to 2012. The former president is believed to have tried to keep the outspoken channel in line by giving it to trusted straw men. Khalvashi, allegedly one of those fronts, bought the channel in 2004 and sold it two years later – under duress, he claims, from Saakashvili. Georgian courts supported his claim and, following a European court ruling, Khalvashi officially was restored as the owner a week ago.

Then Okruashvili stepped up to claim that Khalvashi initially bought the channel at his behest and with his money. He produced and submitted for forensic expertise a copy of an agreement signed by Khalvashi that he claimed proves that Okruashvili is the real owner of Rustavi2.

A few days later, Okruashvili was arrested and placed in pretrial detention. “His arrest is connected to the Rustavi2 case, the statements he made against Bidzina Ivanishvili and, generally, his actions as opposition,” his wife, Irina Okruashvili, told journalists.

Okruashvili had received warnings from the ruling party to drop his claims to Rustavi2, said Kote Kemularia, a member of Okruashvili’s party and a prominent economic analyst. “We have information that they [the government] plan to pressure Okruashvili to make him step back or change his plans. This is a direct order from Bidzina Ivanishvili,” Kemularia said at a press conference. He asked human rights groups to help guarantee safety for Okruashvili’s family.

Khalvashi vigorously denied Okruashvili’s claims to Rustavi2. “I don’t want to talk about Okruashvili because I’m a godfather of his child… Anything I’m going to say will hurt that child and I’m afraid of God,” Khalvashi told media. Such piety did not stop him from nevertheless describing Okruashvili as the “worst man” and “scum.”

The June 20 clashes vividly illustrated the importance of Rustavi2 and the sensitive position of the ruling party. The station closely covered the clashes and their political fallout, and gave a key platform to critics of the ruling party, which likely further damaged the ruling party’s already diminishing approval ratings.