The unprecedented White House statement was welcomed by Armenians around the world, and viewed in the Caucasus through the lens of last year’s war with Azerbaijan. 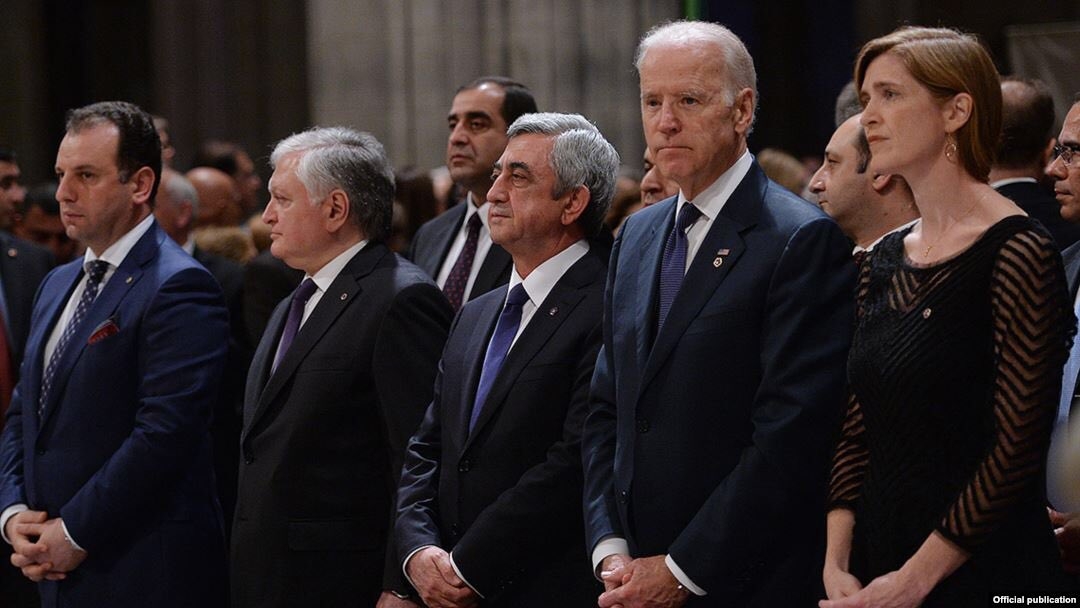 Then-U.S. Vice President Joe Biden, along with then-president of Armenia Serzh Sargsyan, at a 2015 commemoration of the Armenian genocide. (photo: Twitter, Samantha Power)

Biden made the unprecedented statement on April 24, the 106th anniversary of the events now marked as the beginning of the genocide, the deportation from Istanbul of more than 200 members of the ethnic Armenian elite of the city. Ultimately, “one and a half million Armenians were deported, massacred, or marched to their deaths in a campaign of extermination,” as Biden’s statement put it. “The American people honor all those Armenians who perished in the genocide that began 106 years ago today.”

For decades the U.S. has shied away from using the term “genocide” for the sake of maintaining its good relations with Turkey, which still denies that the massacres amounted to a genocide. But as Washington-Ankara ties have weakened, so have the arguments for avoiding genocide recognition.

In 2019, the U.S. Congress for the first time passed a resolution acknowledging the genocide, but then even many advocates for genocide recognition objected to the timing. The resolution was passed immediately after a Turkish military offensive in northern Syria, and many of its backers in Congress explicitly framed the resolution as a means of punishing Turkey for that.

This time, though, the tone of the recognition was less tit-for-tat retaliation and more broad acceptance of the fact that ties with Turkey shouldn’t prevent the U.S. from acknowledging the truth of what happened in 1915. “We affirm the history. We do this not to cast blame but to ensure that what happened is never repeated,” Biden said.

While the response from Ankara was predictably angry, many analysts of Turkey say that the genocide issue has faded in importance in recent years. “A decade ago, Armenian genocide recognition would have been the biggest crisis in US-Turkey relations,” wrote the Istanbul correspondent for The Economist, Piotr Zalewski, on Twitter. “Today it barely makes the top 10.”

“I give the Turkish outrage cycle after Biden's declaration three days, tops,” added Howard Eissenstat, a historian of Turkey at St. Lawrence University. “Then it will be back to the same haggard, harried relationship we have all grown accustomed to.”

Until recently, Turkey under President Recep Tayyip Erdogan had been itself inching closer to acknowledging the genocide, though that momentum has since been reversed under Erdogan’s newly nationalist turn.

Erdogan issued an uncharacteristically generous statement on the anniversary, praising the “shared culture” of Turks and Armenians and honoring the latter’s contribution to Ottoman and Turkish life, though it of course failed to classify the killings as genocide. “I remember with respect the Ottoman Armenians, who lost their lives under the harsh conditions of the First World War, and offer my condolences to their grandchildren,” he said. The statement, however, came amid a broader climate of sharply rising government-encouraged hate speech against Armenians.

Armenians greeted Biden’s statement as long-overdue but especially welcome given their sense of abandonment since failing to enlist much international support in last year’s war with Azerbaijan. In the war, Azerbaijan enjoyed heavy Turkish support as it managed to regain most of the territory it had lost to Armenians in the last war between the two sides, in the 1990s. The Turkish involvement bolstered many Armenians’ belief that their conflict with Azerbaijanis, who many equate with Turks, was another chapter of the genocide.

“The recognition of the Genocide is a matter of truth, historical justice and security to the Republic of Armenia, especially in the light of the events that took place in our region last year,” Prime Minister Nikol Pashinyan said in a statement.

Azerbaijan, too, tied the genocide recognition to its conflict with Armenians. Azerbaijan’s long-standing warm ties with Turkey have gotten even closer since the war, and officials in Baku lined up to show their solidarity with Turkey. President Ilham Aliyev called Erdogan and described Biden’s statement as “a historical mistake.”

Azerbaijan’s Ministry of Foreign Affairs also criticized Biden for not acknowledging what it has tried to portray as a “genocide” committed in 1992 by Armenian forces against ethnic Azerbaijanis in the village of Khojaly, in Nagorno-Karabakh, in which over 400 civilians were killed.

“While misrepresenting the events that happened 100 years ago, the failure to give a fair assessment of the genocide committed by Armenia against Azerbaijanis in Khojaly 30 years ago is an example of bias and double standards,” the MFA said.