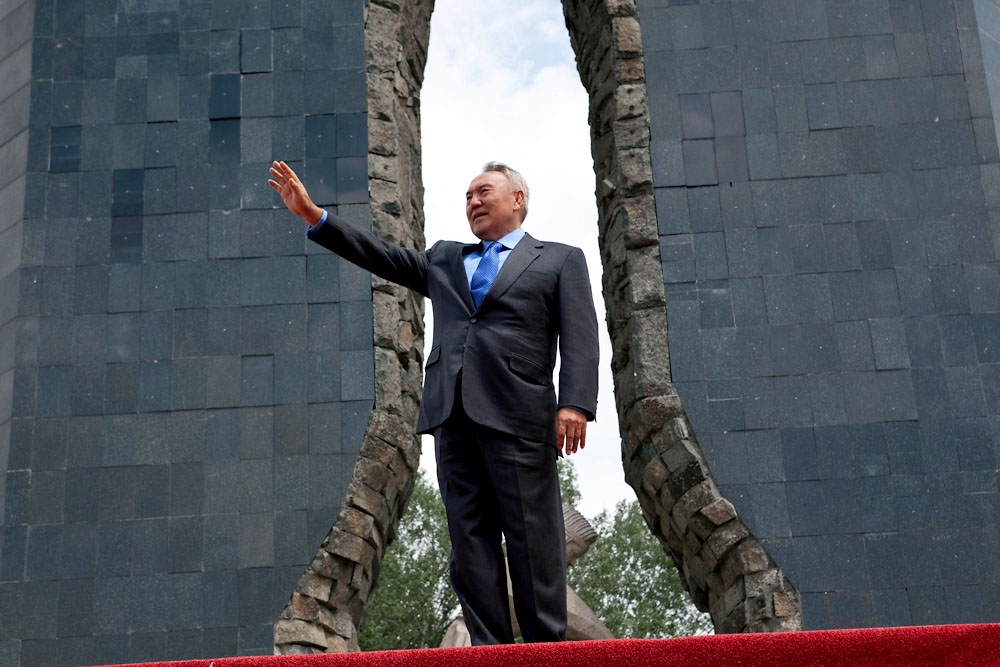 Nazarbayev waves to the crowd during an anti-nuclear weapons rally. (Photo: David Trilling)

It has been widely reported that Kazakhstan’s president, Nursultan Nazarbayev, has rejected parliament-approved amendments to enhance his executive powers. But Nazarbayev’s refusal to sign the legislation may not be the end of the story.

A little-known loophole exists that leaves the door open for the amendments to become law automatically, even without Nazarbayev’s approval, noted presidential aide Yermukhamet Yertysbayev. Usually laws passed by parliament are sent for approval to Nazarbayev, who either approves them or vetoes them. On this occasion, however, Nazarbayev has done neither. Instead, he has merely declined to sign the legislation. According to Article 19 of the law regulating parliamentary affairs, a bill that is not vetoed, signed or returned to parliament automatically becomes law within a month.

In theory, then, the amendments could become law on June 13, a month after the upper house of parliament approved them.

The substance of the legislation, along with its tangled progress so far, prompted Sergey Rasov, a political commentator writing June 7 for the Respublika news website, to draw a comparison to the book Alice in Wonderland. “Everything leads us into mazes and artful designs,” Rasov wrote about the legislation. “It’s just a theater of the absurd.” Respublika frequently carries outspoken criticism of the administration, and the site is currently inaccessible in Kazakhstan. [For background see EurasiaNet’s archive].

The whirlwind legislative process began in mid-May, when Kazakhstan’s parliament pushed through the amendments, which would give Nazarbayev the title “Leader of the Nation,” grant him a policy-making role even after he stepped down from the presidency, and extend other privileges to both himself and to family members. [For background see EurasiaNet’s archive].

In a statement on June 3, Nazarbayev – who has led Kazakhstan for over two decades – expressed his gratitude for the initiative, but said he did not need expanded powers. “The honor of running the country in the difficult years of its establishment and reforms, feeling [the people’s] everyday support in words and deeds and your commitment, courage, tenacity and patience, has fallen to me,” he said. “That is a huge joy, and I do not need anything else.”

The Leader of the Nation bill was initiated by deputies from the Nur Otan Party, which is headed by Nazarbayev and holds all the elected seats in the lower house of parliament. In declining to approve it, the president invoked a sense of modesty: “I have always tried to be above any vanity and this remains my position.”

Nazarbayev has in the past expressed disapproval of displays of sycophancy; he has banned any pomp at the upcoming celebrations of his 70th birthday on July 6, and in 2008, he rejected a bid to change the name of the capital that he founded from Astana to Nursultan.

However, his June 3 remarks came in the wake of criticism that his administration has increasingly fostered a cult of personality: his portraits adorn streets and buildings, and earlier this year a statue of him was incorporated into Astana’s Kazak Yeli (Kazakh Country) monument symbolizing the country’s independence.

While disapproving of a need for more authority, Nazarbayev – who already wields far-reaching powers – made it clear that he has no intention of retiring anytime soon. “While experience and knowledge permit and strength and health suffice, I will work tirelessly, doing my duty, fulfilling the lofty mission placed upon me by my people,” Nazarbayev said. Nazarbayev is exempt from the usual two presidential term limits and can stand in the next election, due in 2012.

He also obliquely addressed a provision in the bill that would grant his family members immunity over property they have acquired, saying that his relatives have the same rights as other citizens and “also, like other Kazakhstanis, should not break the law, before which all citizens are equal.”

The president pointed openly to the case of his former son-in-law, Rakhat Aliyev, who was tried in absentia in 2008 on charges including coup plotting, abduction and theft and sentenced to a total of 40 years in prison. “My relatives and I accepted the fair sentence handed down to him by the court courageously, as is proper,” Nazarbayev said. “It could not be any other way. And this is a harsh lesson, not only to those close to me, but to all the people vested with power in our state.” [For background see EurasiaNet’s archive].

The president’s critics counter that nepotism remains rife in Kazakhstan, and say that the legal troubles of Aliyev – who was divorced by Nazarbayev’s eldest daughter, Dariga Nazarbayeva, in 2007 – only started after he fell out of favor with the president.

Some moderate opposition leaders applauded Nazarbayev’s statements. “I believe the president understood the clear absurdity and stupidity of the parliamentarians’ initiative,” Serik Abdrakhmanov, the deputy chairman of the Adilet Party, said in remarks quoted by the Vremya tabloid on June 5. “So declining this law is a logical decision. The most important thing now is to make genuine democratic changes.” Adilet positions itself as an opposition party, but favors constructive cooperation with the administration.

Some of the administration’s more dedicated opponents, meanwhile, remain suspicious. Given the possibility that the amendments could still become law, Nazarbayev’s June 3 comments constitute “political coquetry,” asserted journalist Sergey Duvanov in a commentary posted June 7 on the independent Respublika website.