As the blockade continues into its second month, local authorities have begun issuing food coupons and announced rolling blackouts. A brief internet outage contributed to anxieties among the besieged population. 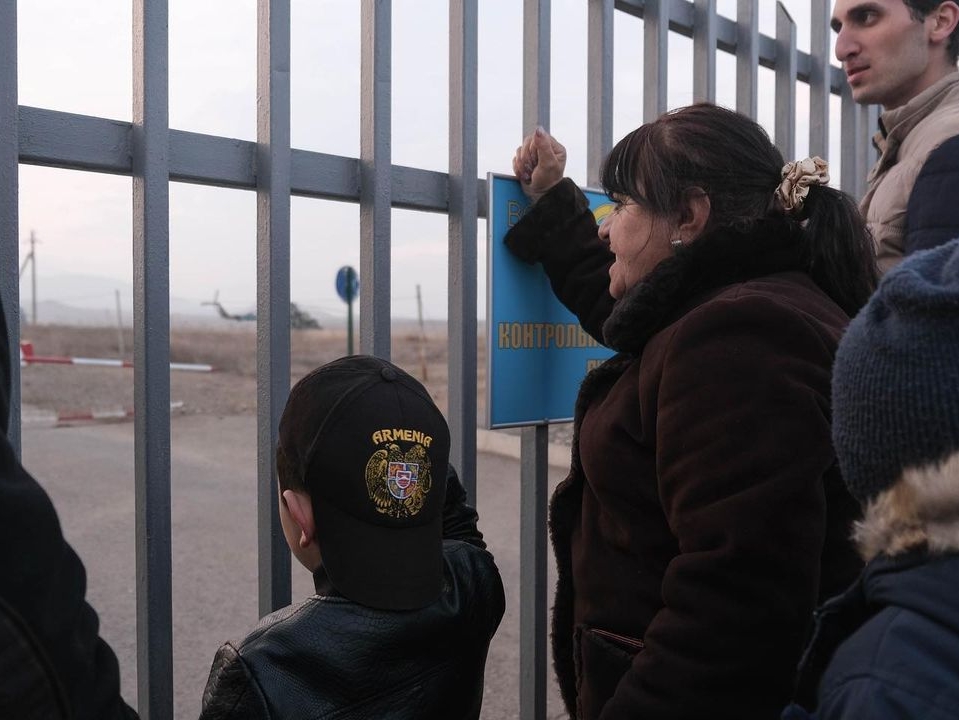 Karabakh residents protest outside a Russian base in December. (Ani Balayan, used with permission)

On January 9, the Operational Headquarters overseeing the emergency situation in Nagorno-Karabakh unveiled a coupon system to regulate the distribution of imported food supplies.

The next day, the local authorities announced rolling blackouts because of damage to the cables bringing electricity from Armenia through the town of Lachin, which fell under Azerbaijani control in August 2022.

“Because of the unconstructive position of the Azerbaijani side, at the moment we are unable to visit and inspect that section and organize repairs,” Artsakhenergo, the local power grid operator, stated.

The territory is therefore entirely reliant on its own ability to generate electricity at the Sarsang hydropower plant, which is not able to operate at full capacity due to low water levels. Several Karabakh residents who spoke to Eurasianet reported daily two-hour blackouts.

Self-described environmental activists from Azerbaijan have been staging a protest at the Lachin corridor – the sole road connecting Nagorno-Karabakh to Armenia – since December 12.

They have effectively blocked the delivery of goods into the Armenian-populated region and left some residents unable to return home from Armenia. Shortly after the blockade began, shortages of food and medicine were reported, raising concerns of a possible humanitarian catastrophe.

The Operational Headquarters, headed by newly appointed state minister Ruben Vardanyan, reported that some products are being imported through the mediation of the International Committee of the Red Cross (ICRC) and the Russian peacekeeping forces deployed in the region since the end of the Second Karabakh War in 2020.

But the supplies are meager compared to the pre-blockade delivery of 12,000 tons of goods monthly, and barely meet the needs of the local population, which Armenian sources estimate at around 120,000.

The shortages have had a knock-on effect on the service industry, with cafes and restaurants on the brink of shutting down.

Vadim Balayan, who owns a cafe in Stepanakert, the region’s de facto capital, fears that food supplies will not be enough to keep him in business. “For now I have enough products stored to run my cafe, but I’m afraid it won’t suffice for another month if the blockade continues,” he told Eurasianet.

Official reports assert that 690 small and medium-sized businesses (14.7 percent of the total) have already suspended their activities, leaving 3,200 people out of work.

To ensure the primary needs of the population under siege, the Operational Headquarters’s coupon system applies to the most basic foodstuffs such as pasta, rice, buckwheat, sugar, and sunflower oil. Residents will be allowed to purchase 1 kilogram of each of these dry products and 1 liter of sunflower oil per month.

Coupons were introduced amid reports of locals standing in long queues to purchase basic necessities. Some local brands offer goods like eggs, pasta, and dairy, and these goods, too, will be covered by the coupon system.

“I need to spend a lot more time going to shops in order to find something. Once they receive products, they are immediately sold out,” a resident of Stepanakert, a university professor who asked not to be named, told Eurasianet. “What scares me the most is a possible gas shortage. The rest we can withstand,” she added.

On the second day of the blockade, Azerbaijan did cut off the natural gas supply to Karabakh as gas pipelines also pass through Azerbaijani-controlled territory. Gas was, however, restored after three days amid international pressure on Baku.

Balayan, the cafe owner, worries that the introduction of coupons will not be enough to keep his business afloat. “The coupon system will enable us to purchase essential goods that will only meet the needs of my family. As there’s no constant delivery of supplies, I might have to close my cafe,” he said.

Food insufficiency has adversely affected education, too. Starting from January 9, all kindergartens and some other schools closed because of the food shortages. The overall number of children no longer attending education institutions is nearly 7,000, according to the state-run Artsakh Info Center.

Since the blockade began on December 12, the only vehicles that have managed to pass through the corridor have belonged to the ICRC and the Russian peacekeepers. The ICRC acts as a neutral intermediary and has the mandate to ensure the transportation of people with urgent medical needs out of Karabakh. As of January 11, sixteen patients have officially been taken to Armenia since the start of the blockade.

In an interview with Eurasianet, the ICRC’s spokesperson in Nagorno-Karabakh, Eteri Musayelyan, reported that food parcels had been delivered to nine medical facilities and a boarding school for children from poor families.

“The food delivered will cover their needs for about one month. Furthermore, we delivered food parcels to an institution supporting over 300 destitute elderly people,” Musayelyan said. Earlier, ICRC reported the delivery of 10 tons of cargo, including baby food, medicine, and food, from Armenia to Nagorno-Karabakh. Locals worry heavy snowfall in the Lachin area in recent days might complicate cargo delivery.

The healthcare system in Karabakh is among the spheres most affected by the blockade, as the import of medications is only possible in small amounts and only through the ICRC's mediation. All non-emergency operations have been canceled. "The medical system works in emergency mode. The hospitals are still operating thanks to the ICRC's assistance. If they cease deliveries, we will no longer be able to operate," Karen Baziyan, a doctor at the state hospital, told Eurasianet.

The failure to ensure connection between Karabakh and Armenia also posed challenges on cash circulation in the region. Local ATMs have imposed a limit on withdrawals – up to 50 thousand drams (around $130) per card daily.

There are also restrictions on the sale of gasoline and other fuels.

On January 12, the one-month anniversary of the blockade, there was a widescale internet outage in the region, causing fear and leading to accusations of Azerbaijani sabotage. Access was restored after about an hour, however.

The outage came on the heels of a Yerevan-Stepanakert video conference where the new state minister, Vardanyan, summed up the situation facing Karabakh Armenians in stark terms: “We have three choices: to become citizens of Azerbaijan, to leave, or to overcome this situation. This is the struggle for life, we must do everything in our power,” he said.

Given the failure of diplomatic efforts to pressure Baku and inaction by Armenia’s formal strategic ally, Russia, there is no end in sight for the blockade.