Residents of the territory reported disrupted deliveries of food and heating gas, and hundreds blocked from returning home, as the numbers of Azerbaijani protesters on the scene grew. 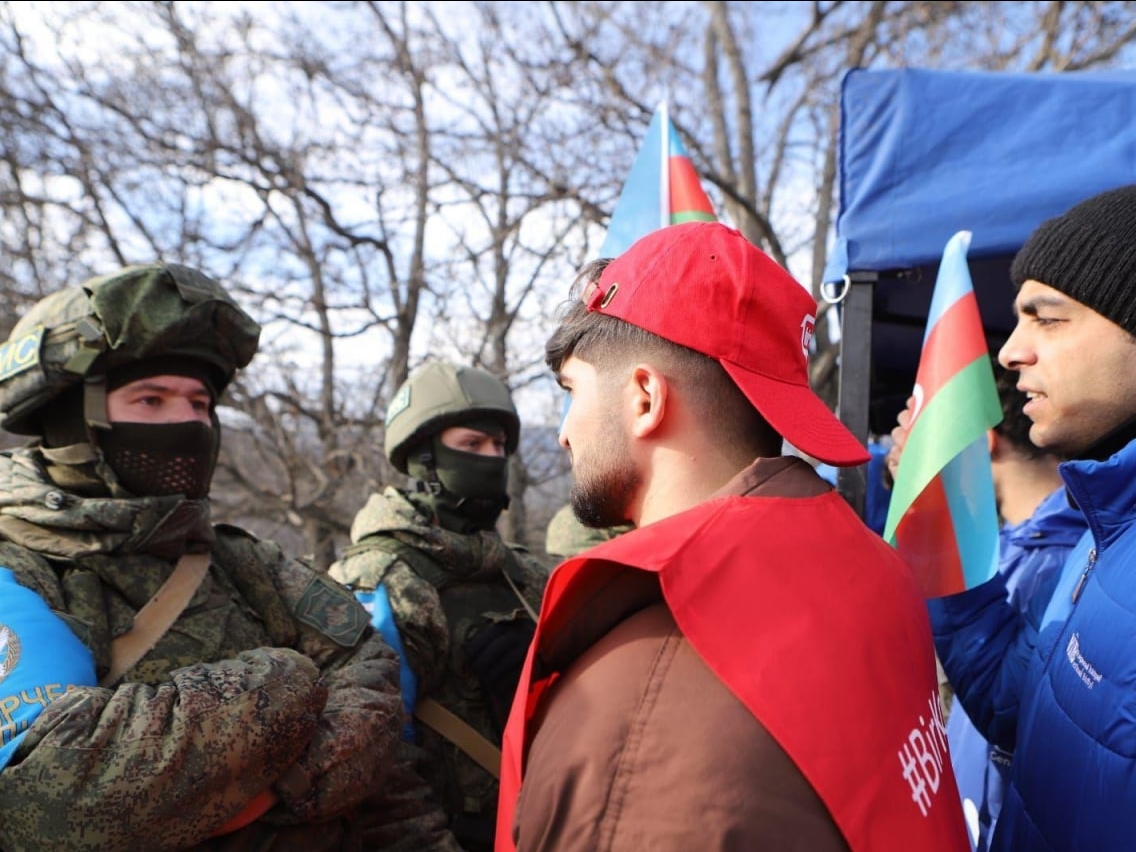 An Azerbaijani blockade of Nagorno-Karabakh continued for a second day, stranding residents on both ends of the blockade and disrupting supplies of food, medical supplies, and other essentials.

As fears of the humanitarian consequences of the blockade rose, officials in the de facto Karabakh government reported the evening of December 13 that Azerbaijan had cut off the gas supply to the territory.

“In parallel with this [gas cutoff], the people of Artsakh have been under a complete blockade for 32 hours. If this is not a crime, what is it?” wrote the territory’s human rights ombudsman, Gegham Stepanyan, on Twitter. (Artsakh is an alternative Armenian name for Karabakh.)

The blockade began on the morning of December 12, when a group of Azerbaijanis from government-affiliated environmental organizations stopped traffic on the road connecting Nagorno-Karabakh to Armenia, citing illegal mining practices in the territory. The road, known as the Lachin Corridor, is the only road connecting Karabakh to the outside world.

Soldiers from the Russian peacekeeping contingent in Karabakh, which has been deployed since 2020 and the mission of which includes protecting the security of the corridor, were on the scene but were not able to reopen the route.

It is the most serious pressure yet applied on the civilian population of the territory, as Baku has been employing various levers of pressure to get the Armenian government to sign an agreement that would restore Azerbaijani control over the territory, which it lost to Armenian forces in a war in the 1990s.

The de facto government press center reported that some settlements located along the corridor – the villages of Mets Shen, Hin Shen, Lisagor and Yeghtsahogh – were cut off from the rest of Karabakh as well as from Armenia. Deliveries of food, in particular bread and flour, and other essential necessities like energy, became impossible, the press center reported. As a result of the gas disruption, school will be temporarily suspended.

Local authorities reported several cases of people with serious medical conditions who could not be transferred to hospitals in Armenia. More than a thousand Karabakh residents, including hundreds of children, were reportedly stuck in Armenia and unable to return home, the press center said.

The territory's new state minister, Ruben Vardanyan, went live on Facebook the evening of December 13 and told residents they should conserve. "They [Azerbaijanis] cut the gas supplies a few hours ago. It means we should be very frugal in our energy use. We should realize that the crisis is becoming a reality. But we all are ready to fight," he said.

At a press conference in Yerevan earlier in the day, Stepanyan and other officials said the blockade was a pretext for what they described as Baku’s “genocidal politics” toward the ethnic Armenian population of Karabakh.

“The self-declared environmental activists are just a tool for Azerbaijan to take those horrible steps. In the 21st century, the entire population of the region is facing the threat of starvation,” Davit Babayan, Karabakh’s acting de facto foreign minister, said.

Since the second war between the two sides, in 2020, Azerbaijani forces have retaken control of all the territory surrounding Nagorno-Karabakh, leaving its ethnic Armenian residents effectively marooned. There has been no civilian air traffic in or out of the territory since the 1990s, and the airport in Stepanakert now functions as the central base for the Russian peacekeepers.

“We will need to use the airport for humanitarian purposes if we do not manage to unblock the land route,” Stepanyan said. “But Azerbaijan will create obstacles for the air traffic as well, threatening that any objects flying out of Stepanakert will be destroyed. So we see that Azerbaijan blocks all the roads providing communication for Artsakh with the world.”

Stepanyan said that the territory’s leadership had “prepared some scenarios depending on how critical the situation will get,” but did not provide details. “We will take action according to how extreme the situation gets, with the involvement of Russian peacekeepers and international actors’ obligations to mediate,” he said.

Azerbaijani media reported that the numbers at the scene of the blockade, on the part of the road that passes by the city of Shusha, had grown, and made little effort to hide the staged nature of the protests. In one December 13 report, Azerbaijani public television reported that nearly 200 "volunteers from state organs were brought" to the protest.

While on the first day the protest slogans focused on environmental themes, by the second day they had become more nationalist, including "The greatest soldier is our soldier!" "Martyrs are immortal, our land is indivisible!" and "Karabakh is Azerbaijan!" Some were recorded making the Turkish nationalist Gray Wolves hand gesture.

The profile of protesters widened as well, with some of the country’s national sports federations joining in. "The homeland called its children, and we have answered that call. We felt it our duty to come here and join the actions together with our compatriots," Abulfat Hajizade, the secretary-general of Azerbaijan Kyokushin Karate Federation, told the news site Report.az.

The protesters said that, in spite of claims that they were disrupting medical care, they were offering to allow locals who needed to use the road to get medical help to pass the barricades. Dilyara Efendiyeva, an activist, gave an interview to the Azerbaijani news site Caliber.az saying that she could help residents in need of medical care pass the road, and included her mobile number. But she told Eurasianet that no one had taken them up on the offer. “Firstly, the Russian peacekeepers aren’t letting anyone through, and also no one has contacted us about this issue,” she said. The only communications she got were people “complaining that the road was closed,” she said.

Caliber.az also reported, following the gas disruption, that there were gas supply issues in other parts of Azerbaijan and that they were connected to winter weather conditions.

Officials in Armenia and Karabakh appealed to the international community to take action in the face of the blockade.

“This is going to be a force majeure situation. We hope that the international community and other actors will do everything so that the situation doesn’t reach the critical point where we will be completely isolated,” Babayan said at the press conference.

"The European Union has been following with serious concern the various developments around the Lachin corridor since the beginning of December," the EU said in a December 13 statement. "The EU calls on the Azerbaijani authorities to ensure freedom and security of movement along the corridor, in line with the trilateral statement of 9 November 2020. Restrictions to such freedom of movement cause significant distress to the local population and create humanitarian concerns."

Russian President Vladimir Putin – who brokered the 2020 ceasefire agreement – has spoken by phone with the leaders of both Armenia and Azerbaijan since the crisis began, but no senior Russian officials have issued a statement on the situation.

With additional reporting by Heydar Isayev and Joshua Kucera.