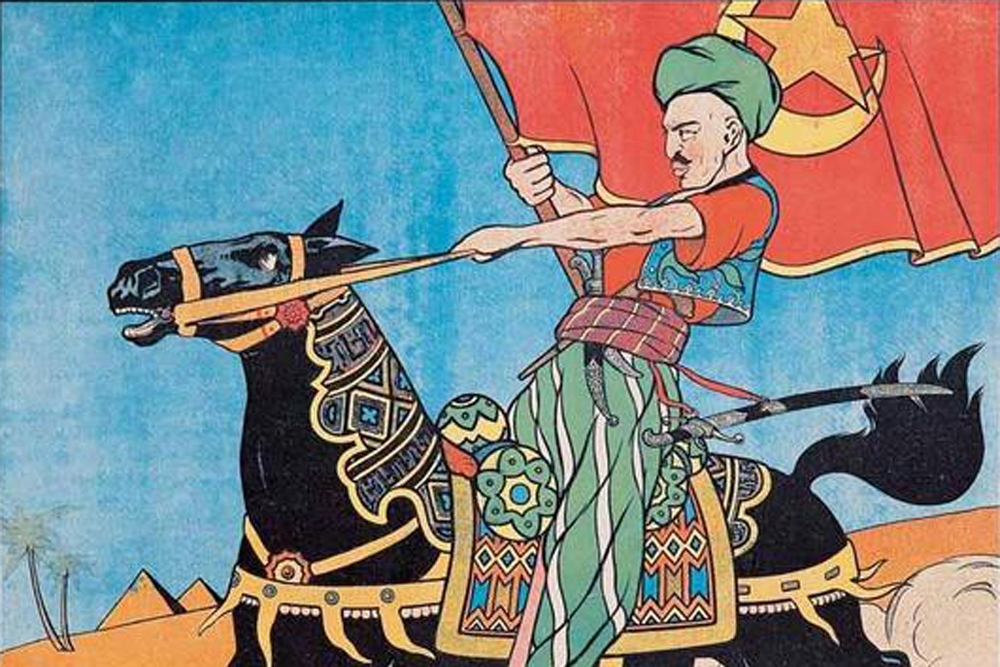 Image: Fragment of a Soviet poster

At the end of Leon Avenue, in the capital of Abkhazia – a city which because of the violent politics of the 20th century is variously called Sukhum, Sukhumi or Sokhumi – stands the elegant white Hotel Ritsa, overlooking the Black Sea.

The street is named after a medieval king, Leon, who founded a royal dynasty in Abkhazia. But you could be forgiven for thinking that the name stands for the most famous guest in the hotel’s history, Leon Trotsky. In 1925, Trotsky famously delivered a funeral oration from a first-floor balcony at what was then the Hotel San Remo, mourning three Bolshevik comrades who had perished in an air crash on their way to Abkhazia.

The year before Trotsky had delivered an even more celebrated funeral speech in the same city, for Lenin. That speech more or less sealed his fate. A combination of sickness and Stalin’s deception meant that Trotsky was not in Moscow and unable to be the chief mourner for the Bolshevik leader. He stayed in Abkhazia until April 1924, by which time he had lost ground to Stalin in the succession race in Moscow.

Transcaucasia was not a peripheral land for Bolshevik leaders. They all knew it well. It was the homeland for several of them, including Stalin, Sergo Orjonikidze and Anastas Mikoyan. It was the place where others, including Trotsky, went for rest and recuperation. It was unthinkable for these men that the revolution should be confined to Russia and Ukraine. Transcaucasia also figured into their plans.

After the Red Army conquered the region in 1920-1921, Transcaucasia became their political battleground and the testing ground for their nationalities policy. Lenin and Stalin famously clashed over the “Georgian Affair” of 1922. Stalin accused the leading Georgian Bolsheviks of nationalism for resisting his – ultimately successful – drive to amalgamate Georgia within a Transcaucasian Republic. Lenin blamed Stalin for “great Russian chauvinism” and antagonizing the Georgians.

Trotsky, for his part, both hated Stalin and railed against Georgian nationalists. In a vitriolic pamphlet written in 1922, Between Imperialism and Revolution, he castigated those who had supported what he called the pseudo-Marxist Menshevik Republic in Georgia that the Red Army had overthrown. He also blamed the Mensheviks for mistreating the Abkhaz and Ossetians.

Trotsky did not leave the topic alone. Perhaps still harboring some anti-Georgian sentiments, he helped the local Bolshevik leader, Nestor Lakoba, draft the 1925 constitution for the Abkhaz republic. This made Abkhazia a “treaty republic” with more autonomous powers vis-à-vis Georgia – a status the Abkhaz lost in 1931 and sought to revive in 1992.

These clashes between the senior Bolshevik leaders in 1921-1925 formed policies that set the template for the ethno-territorial construction of the USSR, which started to crumble in this very region in the late 1980s. Their disagreements are also a reminder that there is no single “Bolshevik history” of the South Caucasus.

I asked Abkhazia’s leading historian, Stanislav Lakoba, a relative of the late Bolshevik leader, to characterize the early Bolshevik era in the South Caucasus for me. In the early 1920s, he said, there was much to be thankful for.

“We had it differently, we had a boom,” Lakoba said. It helped, he said, that the Sovietization of the Caucasus began in 1920-1921, later than in Russia, and coincided with Lenin’s tolerance of private trade under the New Economic Program. In Abkhazia’s case, the NEP enabled the tobacco trade to flourish.

The Red Army’s conquest crushed three nascent – and very imperfect – democratic national republics in the region. But that did not mean they did not have public support. Lest we forget, the Bolsheviks also put an end to five years of inter-ethnic conflict in Transcaucasia. In his 1922 pamphlet, Trotsky trumpets this achievement. With its brutal pacification of the region in the name of workers’ rights, the Red Army snuffed out conflicts not just in Abkhazia, Ossetia and Karabakh, but in Ajaria as well.

“Soviet power alone has established peace and national intercourse [among peoples],” Trotsky wrote. “At the elections to the Soviets, the Baku and Tbilisi workers elect a Tatar, an Armenian, or a Georgian, irrespective of their nationality. In Trans-Caucasia, the Moslem, Armenian, Georgian, and Russian Red regiments live side by side. They are imbued with the conviction that they are one army, and no power on earth will make them move against one another.”

A decade later, of course, the nations of the region found common cause in experiencing the full force of the Great Terror conducted here by the bloodthirsty native of Abkhazia, Lavrenty Beria. Almost the entire Bolshevik leadership, including Nestor Lakoba, and much of Abkhazia’s intelligentsia, perished.

So there were many Soviet eras here, not one. The main post-1991 narrative in all three countries of the South Caucasus – that the Soviet Union was just the Russian Empire Part II – is much too simplistic. The Bolsheviks brought Russification, but also a deepening of national identities. They brought war and peace, as well as emancipation and servitude.

Like most revolutionaries, they made irreversible changes that are still felt like a violation. The Bolsheviks drew the borders for the three international states of the South Caucasus, and the borders of the breakaway territories of Abkhazia, Nagorno-Karabakh and South Ossetia. They thereby defined the shape of the conflicts that have torn apart the region since 1988 – although it is a stretch to say that they created them.

The Bolsheviks smashed old religious practices, and created the relatively secular culture that still pervades the region’s big cities at least. They persecuted whole groups, such as the urban middle-classes, or later Georgia’s Meskhetian Turks. They built roads, and the first universities and big factories the region had ever seen.

Even a century after the October Revolution, the legacy is too close for the people of the South Caucasus to evaluate properly. No one wants to see that era return, but everyone comes from it. Maybe the next generation of historians in the region can begin to make sense of its contradictions.

Thomas de Waal is a senior fellow with Carnegie Europe, specializing in Eastern Europe and the Caucasus region. He is the author of numerous publications about the region.