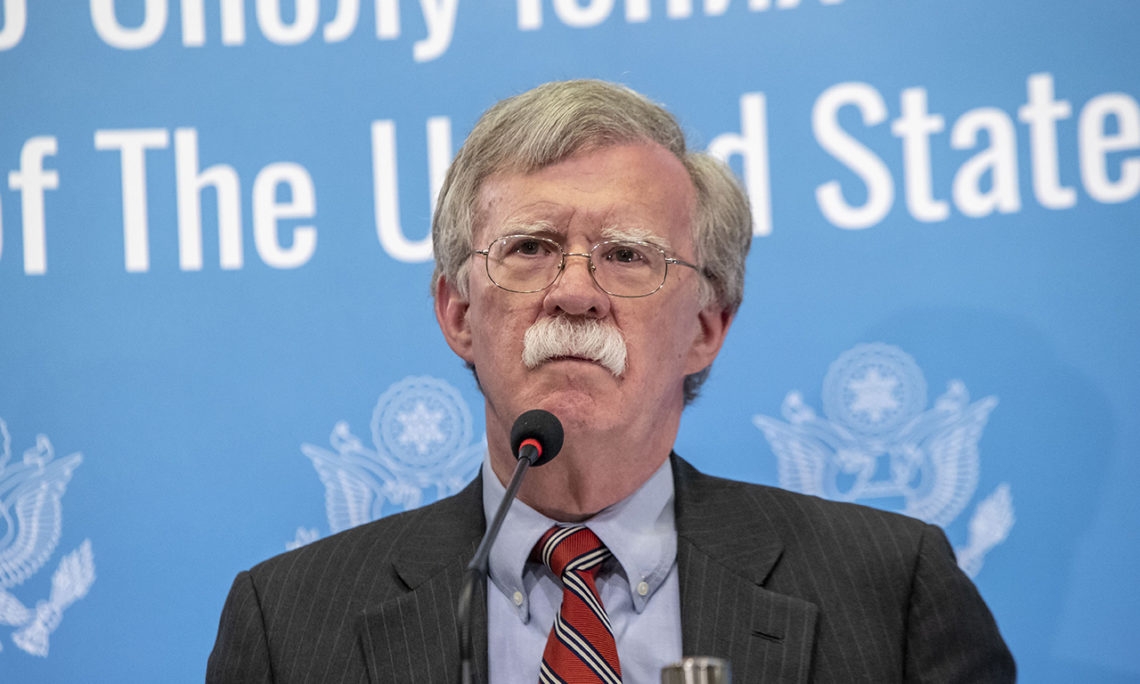 A senior adviser to U.S. President Donald Trump is visiting the Caucasus, where he is expected to try to enlist the region's three governments in Washington's campaign of isolating Iran. But leaders in the Caucasus, wary of confronting Tehran, will likely instead be promoting their own interests to an administration that has thus far largely neglected the region.

National Security Adviser John Bolton is scheduled to arrive in Baku on October 24, before visiting Yerevan and Tbilisi. It will be the highest-profile visit yet by a Trump administration official to all three countries of the Caucasus. None of the three currently has a U.S. ambassador, and policymakers have complained of a lack of American engagement.

Bolton has said his visit will focus on regional security. He told radio host Hugh Hewitt before the trip that he will be “in the Caucasus to see the very significant geographical role that they have dealing with Iran, dealing with Russia, dealing with Turkey.”

In particular, Bolton is expected to focus on Iran, a country that maintains good relations with Armenia, Azerbaijan and Georgia, but which the Trump administration is aggressively attempting to isolate. Bolton is a longtime Iran hawk and a leading advocate in the administration for leaving the Iran nuclear deal and reimposing sanctions on Tehran.

“I can't figure out what else [besides Iran] he would have to discuss” in the Caucasus, said Paul Stronski, senior fellow in the Russia and Eurasia Program of the Carnegie Endowment for International Peace, a Washington, DC, think tank.

“Last month at the United Nations, Trump called for international action to deter Iran, but his efforts have for the most part been unsuccessful,” said Carey Cavanaugh, a retired U.S. ambassador who worked in the Caucasus, in an interview with Armenian news website news.am. “Now Bolton is trying to secure support in the Caucasus and in Moscow so as to counter Iran influence.”

In its long diplomatic and economic campaign against Iran, Washington has tried to force other countries to also curtail ties with Tehran. But it has tended to look the other way at the Caucasus countries' growing ties with Iran, given their geographic proximity. Especially in the case of Armenia, Iran provides a critical lifeline as its borders to the east (Azerbaijan) and west (Turkey) are closed.

“It's always a friction point,” Stronski told Eurasianet. “Because of U.S. concerns and U.S. sanctions, these countries have not developed as robust economic ties [with Iran] as you would expect for such close geographic neighbors. But they have always been able to push back at criticism, simply because they have no other options.”

It is not clear, however, whether the Trump administration intends to stick to this hands-off policy with regard to the Caucasus and Iran. “U.S. policy is so muddled right now that it's really hard to figure that out,” Stronski said. “The M.O. of this administration is to make big pronouncements and then not be as clear in the follow through. But Bolton and Trump certainly feel strongly about Iran and so maybe they will be putting in that second level of guidance.”

In any case, the increasing pressure has complicated the Caucasus countries' already precarious geopolitical position.

“The pullout from the JCPOA puts these countries in a difficult position,” Stronski said, referring to the Trump administration’s withdrawal from the 2015 nuclear deal with Iran. “The horrible deterioration in U.S.-Russia relations has made their balancing act very difficult, and to the south you have a similar deterioration. It really puts these countries between a rock and a hard place.”

While Iran is likely at the top of Bolton’s agenda, his interlocutors in the Caucasus may instead try to steer the conversation away from Iran and towards their priorities instead.

In Tbilisi, Georgian government officials are unlikely to want to get drawn into a U.S.-Iran conflict, instead preferring to keep the agenda focused on issues like security cooperation, said Kornely Kakachia, the director of the Georgian Institute of Politics.

“Georgia remains a steadfast supporter of U.S. initiatives,” Kakachia told Eurasianet. “However, due to permanent pressure from Russia it can't endanger its national interest, which seeks pragmatic and balanced relations with Iran. So, as in the last decade, Tbilisi will try to find a delicate balance between its regional interests and those of the West.”

Similarly, the Azerbaijani side is likely to seek more active engagement of the U.S in resolving the conflict with Armenia over Nagorno-Karabakh, said Zaur Shiriyev, a Baku-based analyst for the International Crisis Group. “The Azerbaijani side is reluctant to be seen in Iran as participating in U.S. policy. It could be misinterpreted by Tehran, and Baku doesn’t want to damage its bilateral relations with Iran,” Shiriyev told Eurasianet. “The Nagorno-Karabakh issue will be the top issue [for the Azerbaijanis when Bolton visits], but it is hard to expect much new initiative from the U.S. side,” he added.

“Baku nurtures hopes for U.S. efforts as co-chairman of the Minsk Group of the OSCE,” the body attempting to resolve the Nagorno-Karabakh conflict, wrote the haqqin.az website in a recent commentary. “And, of course, Baku will be conducting negotiations with Bolton exactly on this.”

In Armenia, Bolton will be meeting with a new leadership which has promised dramatic domestic reforms but thus far vowed no significant foreign policy shifts. Still, Yerevan is trying to formulate a strategy for dealing with an administration that has moved away from the traditional U.S. emphasis – at least rhetorically – on democratization and toward a “more neorealist approach which is predicated on interests-sharing and functions-sharing,” said Eduard Abrahamyan, a London-based analyst of Armenia.

“From Armenia's perspective, there is a genuine intention to balance Russia through proactive engagement with the United States on one side and with Iran from the other,” Abrahamyan told Eurasianet. “This means advancing Armenia-Iran strategic ties while being transparent with the U.S. about the core intentions.”