The book dispels a widely held misperception in the West that Putin is an omnipotent puppet-master, pulling all the strings in Russian disinformation operations. The reality is not so exotic. 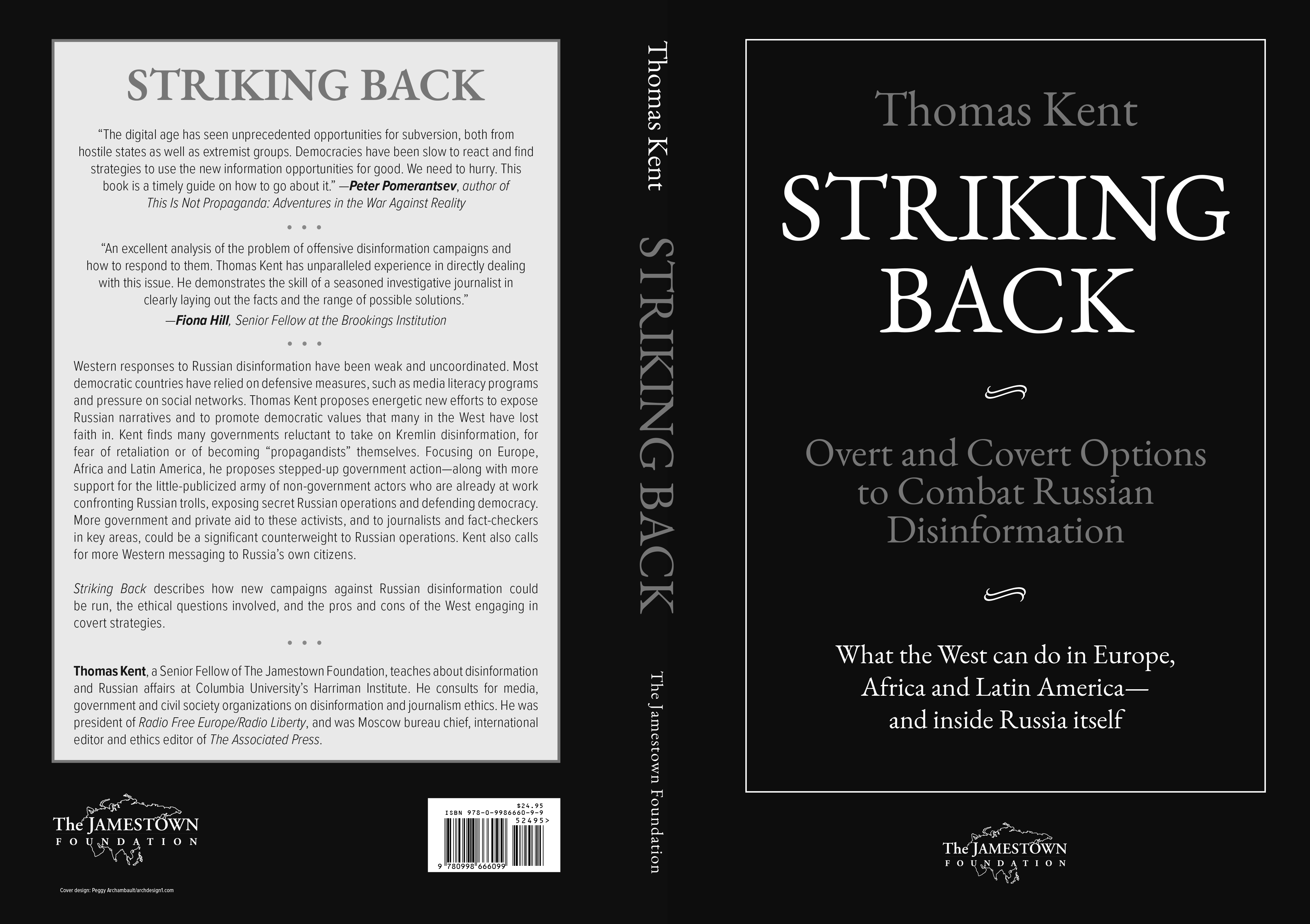 As election season in the United States reaches its dénouement, it’s already clear that Russia has once again worked to digitally manipulate the process. A new book on Russian disinformation operations shows that Moscow’s meddling around the world won’t stop until Western democracies adjust how they respond.

Striking Back: Overt and Covert Options to Combat Russian Disinformation, by veteran journalist Thomas Kent, provides needed context and useful policy prescriptions to address the perennial challenge of Russian mischief-making. It is a welcome point of departure for a long-overdue public policy debate.

Today’s dilemmas are in large part the result of decisions made in the early 1990s, when the Soviet Union’s collapse ended the Cold War. At that time, the West in general, and the United States in particular, suffered from a severe case of hubris that induced intellectual paralysis in policy-making circles. Experts and officials in Washington and elsewhere mistakenly believed the Soviet Union’s demise was some sort of millennial moment: Many were convinced the “end of history” had arrived, ushering in a market-driven democratic paradise that would prevail for the rest of recorded time.

As Kent puts it, “Western democracies took for granted after the Cold War that political liberty had become the world’s natural condition.”

The book highlights how triumphalism bred complacency, which, in turn, facilitated the corrosion of democratic institutions from both the inside and outside. Numerous missteps made it tougher for the West to sell “democracy” as a concept to the rest of the world. And while the West lagged in developing messaging that could resonate, authoritarian-minded leaders in Russia, China and elsewhere were busy innovating, using new ways to undermine Western concepts and advance an alternative socio-economic vision.

The turning point proved to be the advent of social media, the book shows. Social media platforms enabled fear and emotion to gain equal footing with reason. They created the opening that Russia’s well-oiled propaganda machine had long been looking for to establish direct channels of communications that could reach a mass Western audience.

Russia, Kent suggests, had an inherently better grasp on how to harness social media’s capabilities to advance its interests. Quickly after Vladimir Putin began his second stint as Russian president in 2012, Moscow revolutionized geopolitical competition with hybrid warfare, weaponizing the way information was gathered and disseminated.

“Russia has always understood that the information marketplace is as unsentimental as any other: Products move depending not only on their inherent value, but on how good they look, their emotional appeal and the recommendations of friends,” Kent states. “Products also sell because they fill a need.”

While Russia embraced the idea of never-ending information war, the West rested. To compound the difficulties, the playing field changed significantly.

“In past wars, almost all disruptive IOs [information operations] came from abroad, usually by radio, leaflets or through identifiable enemy agents,” Kent writes. “In this conflict Russian interests are often advanced by citizens inside democratic countries. This raises by many degrees the complexity of a response, since democratic governments stand for freedom of speech and are not built to propagandize their own people.”

Not only has the West been slow to acknowledge that Russia views the information space is a permanent battleground, Western governments have been complacent when it comes to freshening democracy’s brand for a global audience.

“In past contests of public persuasion, democracies calculated they had “a better story to tell” and would therefore triumph,” Kent writes. “Today, the ‘story’ the West has to tell is not as persuasive.”

Kent dispels a widely held misperception in the West that Putin is an omnipotent puppet-master, pulling all the strings in Russian disinformation operations. The reality is not so exotic; messaging is not as coordinated as many believe. In addition to government-run information operations, a legion of rascals, operating beyond official control, work in ways that support Kremlin objectives.

The varied nature of manipulation efforts is useful for the Russian government, giving it plausible deniability.

“A thick array of private contractors, hackers and social media artisans, some loyal to Moscow and others just looking for money, all play a role in sowing chaos in the West,” Kent states. “For Russian purposes, confusion can be useful.”

What is to be done?

Kent spends a considerable portion of his book examining ways that the West can make up for lost time. Perhaps the top priority for the U.S. and other governments should be improving inter-agency coordination of counter-disinformation efforts. Given the Trump administration’s controversial interactions with Russia, and the president’s indulgent attitude towards Putin, it’s not surprising that the U.S. response over the past four years has been haphazard.

Washington could also better harness the power of the law to weed out malign actors from the information landscape. One way to achieve this, Kent suggests, is to think about amending existing legislation, such as Section 230 of the U.S. Communications Decency Act, which shields the operators of any “interactive computer service” from legal responsibility for whatever users post. Congressional action that holds service providers more accountable for posted content could significantly boost disinformation containment efforts.

He adds that tackling disinformation as a consumer protection matter could be a game-changer. Such an approach would allow regulators to require web platforms to “verify the identities of account holders, require clear labeling of who is behind ads and ‘promoted content,’ and make certain that everyone who engages with false content sees follow-ups when fact-checks come through,” Kent writes.

Other potential regulatory changes include implementation of a licensing system in which a content platform would need to demonstrate that it is not a regular purveyor of misinformation/disinformation. Those platforms deemed not in compliance with established standards would still be allowed to operate in the U.S. but would be barred from generating or receiving advertising revenue from posted content. In other words, a web-based entity should not be allowed to profit from spreading demonstrably false information.

One way to make non-profits more effective is for major donors to alter their grant-making philosophies. Currently, many grants awarded to information-oriented NGOs impose strict conditions on spending, requiring the recipients to focus on meeting short-term objectives that inhibit experimentation and innovation. Kent argues that major donors should ease restrictions on funding and supply more of what’s known as “core support.” Such unrestricted funding would enable non-profits to focus on the kind of longer-term thinking that can better counter disinformation.

Like many others, Kent believes tech giants, such as Google and Facebook, must do more to police their domains, given that their operations have become so central to society that they now effectively operate as public trusts.

As a former head of the government-funded Radio Free Europe / Radio Liberty, it’s not a surprise that Kent also urges Congress to provide more robust support for congressionally chartered broadcasters.

RFE/RL, which started in the early 1950s with the explicit aim of checking the advance of communism in Europe, has recently come under pressure from Trump administration appointees, who seem intent on tearing down the firewall that protects its editorial independence. Such a development would leave RFE/RL, Voice of America and others vulnerable to governmental meddling and, more likely than not, hinder their ability to counter Russian information operations.

An editorial tweak that Kent wants congressionally funded broadcasters to make is more reporting showcasing the benefits/advantages of a democratic society.

“Highlighting what is legitimately positive about Western broadcasters’ home countries is not inappropriate,” he writes. “If Western countries do not promote their own accomplishments, no one else will do it for them.”

Thomas Kent, “Striking Back: Overt and Covert Operations to Combat Russian Disinformation,” The Jamestown Foundation, 2020.