The isolated region is struggling to secure food supplies. 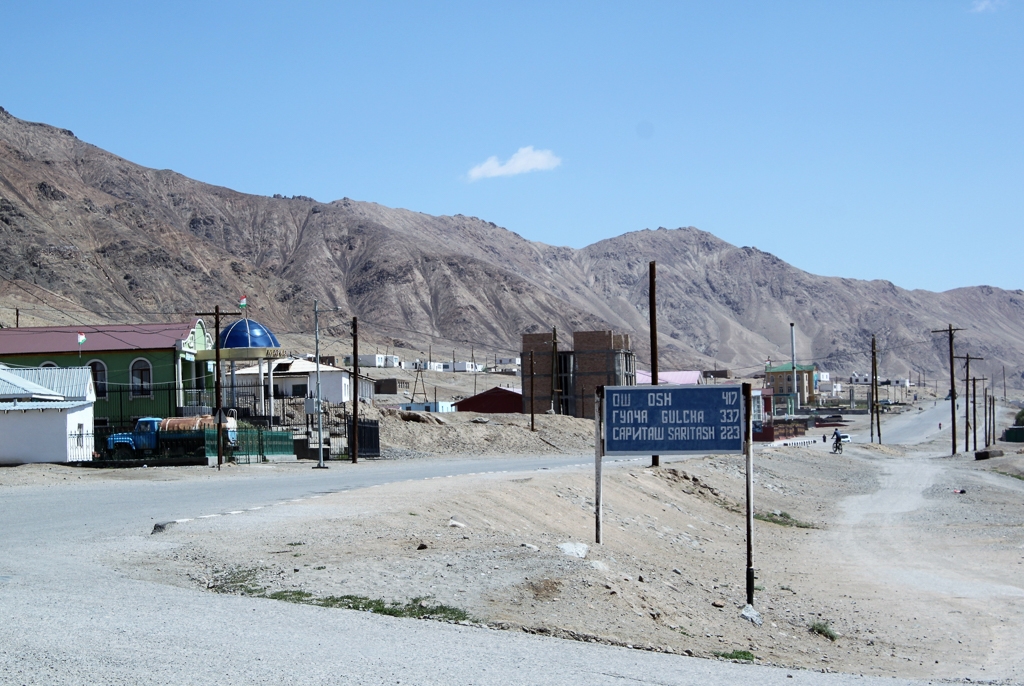 A good off-road vehicle in Murghab, the largest settlement in the highlands of Tajikistan’s easternmost district, is a lifeline in more ways than one.

For starters, it’s a taxi.

“My family contributed money so that I could buy a car and take people to Osh,” said Murghab resident Maksud, referring to Kyrgyzstan’s second-largest city, which lies several hours to the north. “I made a good income for my family.”

And a good-sized vehicle can double as a miniature freight transport.

“When there are no clients, I bring back foodstuffs from Osh and sell them in the market,” said Maksud.

COVID-19 had severely complicated travel across the border with Kyrgyzstan, but the traffic ground to a halt following a bout of fighting between the two countries in late April.

The Murghab district, home to around 14,500 people, is too high up in the mountains for fruit and vegetables to grow. Osh, set within the vegetative plentitude of the Ferghana Valley, around 400 kilometers away, would normally be the most natural place from which to bring in those items.

With that foreclosed, the only option remaining is to carry things from the capital, Dushanbe, a complicated 830-kilometer drive to the west.

In recent centuries, only ethnic Kyrgyz nomadic herders have had the fortitude to eke a living out on this difficult land. In Soviet times, though, the installation of a military base in Murghab meant the basics were delivered in dependable amounts. Electricity never ran short. And there was work – and well-paid work at that, making Murghab a sought-after hardship posting.

The trauma and ruin precipitated by the collapse of the Soviet Union was worsened by the Tajik civil war of the 1990s.

The isolation has fostered a spirit of self-reliance, but the events of the past year are imperiling a difficult balance.

Tajaliyeva has her own cows for milk, but these only go some way toward meeting the needs of her guests. To cover the shortfall, she must go to the market for imported, packaged goods. But the number of things that can be brought in from the center is limited.

“We only have two seasons: fall and winter. So, we do not have a shortage of clothes. Our main shortage is in food,” Tajaliyeva said.

The government goes some small way toward preventing complete starvation by means of allocations made through its so-called state reserve, which organizes consignments of flour, pasta and vegetable oil.

“We provide supplies to all six villages subordinate to the Murghab region,” said Maradbek Gulbekov, a representative of the state reserve body. “We sell directly to the population. If we sell to local tradespeople, then they will add a markup and the prices in the market will rise.”

The state reserve’s consignments too have been patchy, in part because of a shortage in the availability of containers.

This year’s crises are also dealing a body-blow to one of the area’s few self-sustaining sectors: tourism.

“We did expeditions with tourists. We would gather in Murghab and over a few days we visited the attractions of Murghab in Tajikistan and Osh in Kyrgyzstan. Tourists loved this tour and, well, I made a living,” said one Murghab resident who introduced himself as Bakhti.

With foreigners no longer coming, many of the guesthouses that have opened in Murghab over the years may not survive.

And because those taxis/food transports are not running, the local market is barely surviving. The counters of the traders struggling on through the hard times are dismal and bare.

Fatima Mamadnosirova, who runs a walk-in shop at the bazaar, says people's solvency has cratered over the past year.

“Now they buy food on credit, going from pension to pension. The population has no money. Sometimes, it happens that they get their pension, and then they use half of it to pay their debts,” said Mamadnosirova.

Many traders have just given up altogether.

“Traders have nothing with which to pay taxes and rent. It is easier for them to simply close,” Mamadnosirova said.

The crisis is emotional as well as economic. Murghab is a predominantly ethnic Kyrgyz area and extended families are artificially divided by the Soviet-crafted border. The norm is for people to flitter from one side to the other as employment required.

Aigul, another Murghab resident, bemoans the fact that she cannot visit relatives.

“My brother died, and his four sons, who live and work in Kyrgyzstan, could not go to the funeral. We buried him on our own. How can you be so godless as to close the border like this? You can miss a wedding, but not a funeral,” Aigul told Eurasianet.

Healthcare is another problem. Getting treatment for anything other than simple ailments is impossible in Murghab. Many of the Kyrgyz in the area speak poor Russian and struggle even more with Tajik. But going to Osh is not an option at the moment.

“When we needed to go to the doctor, it was convenient for us to go to Osh. Now we have to go to Khorog [capital of the Gorno-Badakhshan Autonomous Province], but we do not understand their diagnosis and what they are prescribing us. Everything there is in the state language,” said Aigul.

The cruelties feel endless. But the spirit of highland Pamiris may be unbreakable.

Last winter was especially bitter in Murghab. At times, the temperature dropped to as low as minus 60 degrees Celsius. By some accounts, half the local population’s livestock, mostly yaks, froze to death.

“I had 12 cattle. Six of them died,” herdsman Lalbek told Eurasianet. “It was a big blow, but what can you do? We have many, many problems, but we do not know who to turn to for solutions. All that remains is to trust in God. He gave us this test of endurance, but that means he will give us the solution too.”