“Over the last year, it’s gotten much better… I don’t remember a length of time so quiet for so long since the ceasefire in 1994.” 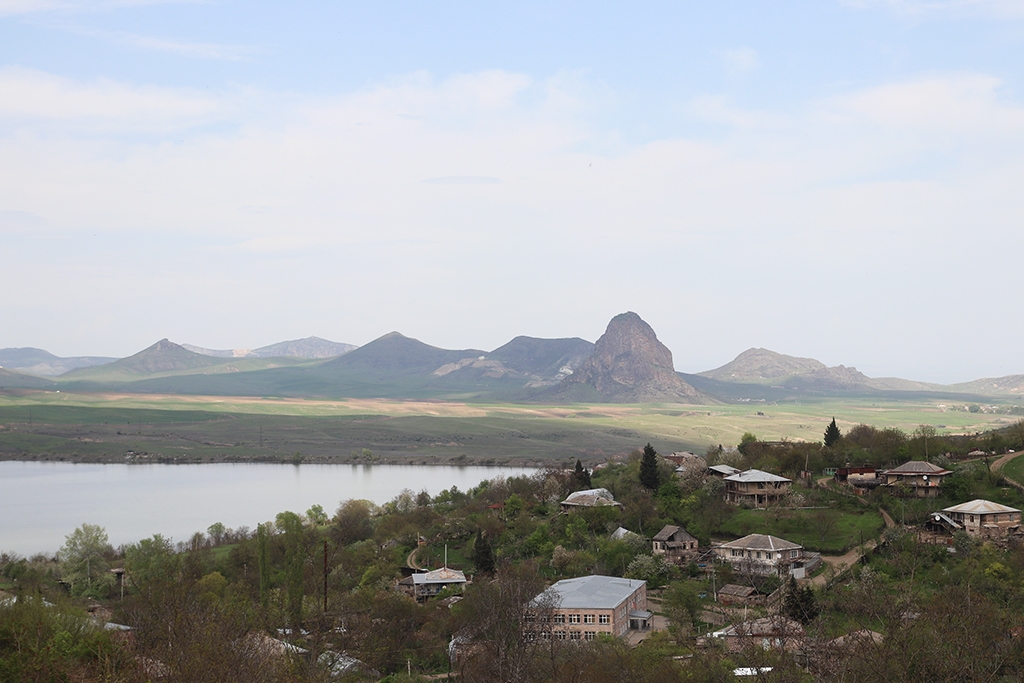 Berkaber. Across the water is a small slice of Armenian territory that has been controlled by Azerbaijan since the war in the early 1990s. (all photos Joshua Kucera)

In 2016, during what became known as the “four-day war” between Armenia and Azerbaijan, Sonia Matinyan’s pregnant daughter-in-law fell ill. Her son bundled his wife into their car and started driving up the rutted road out of the village to take her to a doctor. But the village, Berkaber, sits directly on Armenia’s border with Azerbaijan, and Azerbaijani positions fired on the road as the family was driving. They weren’t hit, but the close call was so frightening that, Matinyan says, her daughter-in-law had a miscarriage.

“After that, my son moved to Yerevan,” she said.

For residents of border villages like Berkaber, regular exchanges of fire had become a common, if never comfortable, experience. Matinyan’s house, on a hillside from which Azerbaijani territory is easily visible, has collected several bullet holes over the years.

But lately, she and other Berkaber residents say, the firing has stopped. “Now it’s peaceful, they don’t shoot,” she said. “When that new president came in, they stopped shooting.”

Matinyan was referring to Prime Minister Nikol Pashinyan, who came to power last spring. While there hadn’t been a serious shooting in Berkaber for more than a year before that, since January 2017, many in the village still attribute the longevity of the peaceful spell to his arrival.

“No one knows” why the firing has stopped, Berkaber’s mayor, Argam Arzumanyan, told Eurasianet. “It was after the revolution. Maybe Azerbaijan changed something, maybe it’s connected with politics, maybe people just got tired of war.”

In any case, he said, “over the last year, it’s gotten much better… I don’t remember a length of time so quiet for so long since the ceasefire in 1994.” 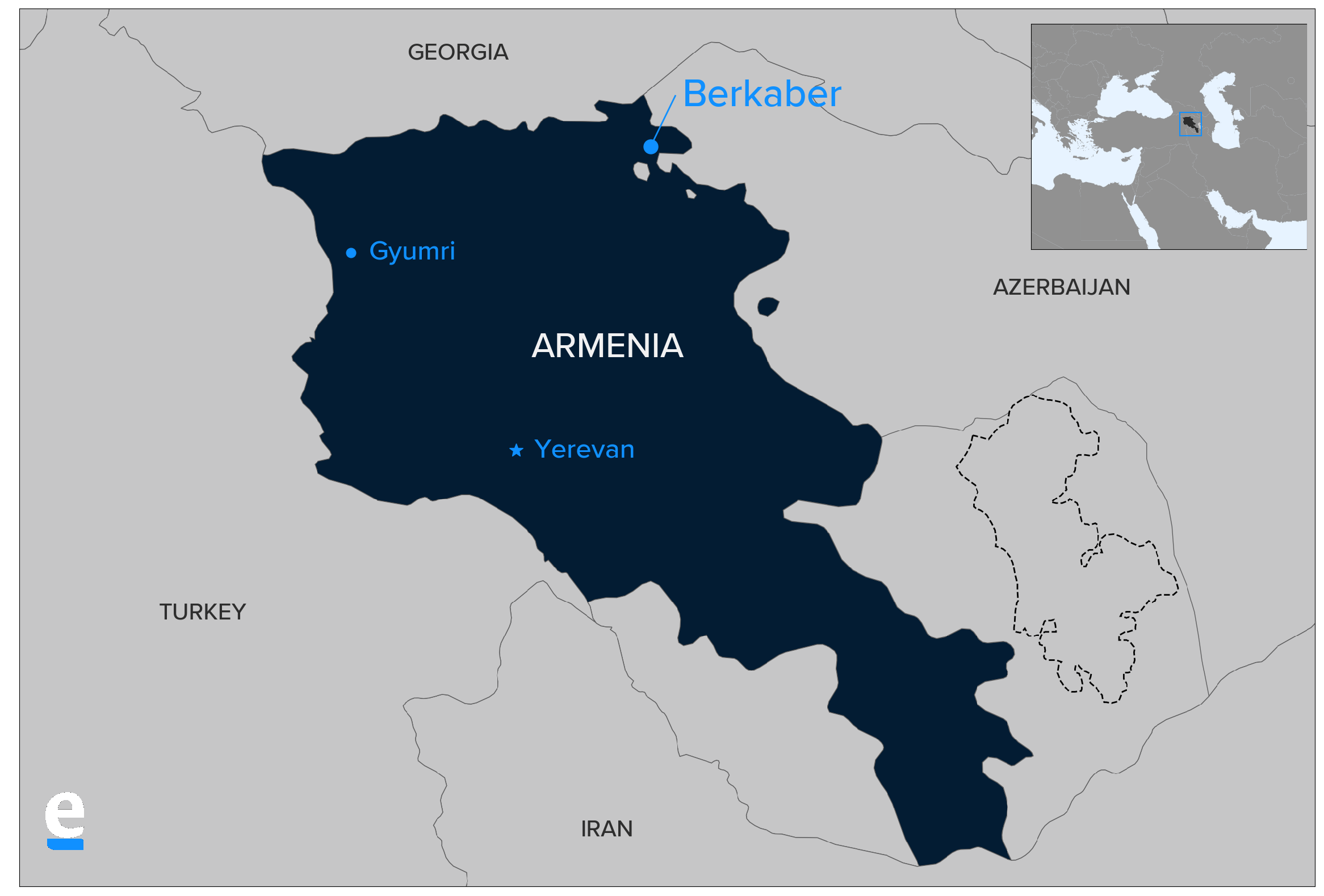 A quarter century after their bloody war over the territory of Nagorno-Karabakh as the Soviet Union collapsed, Armenian and Azerbaijani forces continue to face off against one another across several different front lines. Here, in the northern Armenian province of Tavush, there is an international border with Azerbaijan. In southwestern Armenia there is another international border with the Azerbaijani exclave of Nakhchivan. And surrounding the territory of Nagorno-Karabakh, controlled by Armenian forces since the 1994 ceasefire, is the most heavily militarized front line between the two sides, which saw heavy fighting in the 2016 war.

Ceasefire violations along the various front lines are difficult to measure, as there is no independent monitoring. But by all accounts violence between the two sides did decrease substantially last year, in particular after Pashinyan met Azerbaijan President Ilham Aliyev in September and agreed to set up an operational hotline on which the two sides could talk military issues.

“The two leaders have talked about it and I think they came to some terms to keep the ceasefire permanently,” said Bishop Bagrat Galstanyan, the primate of the Tavush diocese who has carried out a variety of social ministries in border villages like Berkaber. “Probably it has to do with the fact that they are talking and negotiating and proposing some ideas. We can’t definitely say but over the last year, since the Velvet Revolution, it has deepened. … It’s obvious that that’s the fact,” he told Eurasianet.

The Azerbaijan Ministry of Defense and the Nagorno-Karabakh armed forces regularly publish statistics about ceasefire violations; while these figures are widely regarded as fictitious on both sides, they both did decrease dramatically after the September meeting.

In recent weeks the rate of ceasefire violations has risen again around Nagorno-Karabakh and, to a lesser extent, Nakhchivan. But this part of the border has remained calm. (Both the Armenian and the Azerbaijani defense ministries declined to comment for this article.)

The Azerbaijani villages on the other side of the border are tightly controlled, and outsiders who want to visit have to apply for special permission that takes months even in the case it is granted. In Armenia, by contrast, the border villages are being turned into a tourist attraction of sorts.

High on a hilltop in Berkaber sits the Extreme Café, covered in colorful murals and featuring a deck where patrons can enjoy drinks and snacks overlooking Azerbaijani territory. The café was opened in April by a local group, called Berkaber NGO, and is aimed at serving tourists – mainly from Armenia’s worldwide diaspora – who come to visit the village.

“The café is to get visitors to come and see the border and to see what border villagers’ life looks like,” said George Tabakyan, one of the officers of Berkaber NGO and a Lebanese Armenian repatriate who bought a house in the village and lives there two days a week. “Everything we’re doing is to reaffirm that nobody is leaving that land.”

The cafe sells a selection of locally made handicrafts and treats, and one of its unique attractions is military-style body armor that tourists can try on. “It’s the idea of experiencing the uniform,” Tabakyan said. “The conflict obviously is not over yet …. Our village is under their fire and their village is under our fire.”

Another affiliated NGO, Sahman (“Border”), has set up some small enterprises for village residents to make a living. Matinyan runs a small textile enterprise out of her house making T-shirts and uniforms and her first sewing machines were provided by Sahman. The organization also set up greenhouses for other residents. “If it weren’t for them, there would be nothing here for young people to do,” Matinyan said. “The homeland starts at the border, and if people don’t have work, how can they live on the border?”

Still, Matinyan hopes that the situation can somehow return to the way it was before the conflict started. She recalled that there were 20 Azerbaijani families at her wedding in Berkaber. “We were very, very close. They would bring us fruit, watermelon, cherries, a lot. And we would give them pork!” she said with a laugh. “We lived very well together. It’s not just me, but the whole village wants it to be like it was then. They’re simple people like us.”