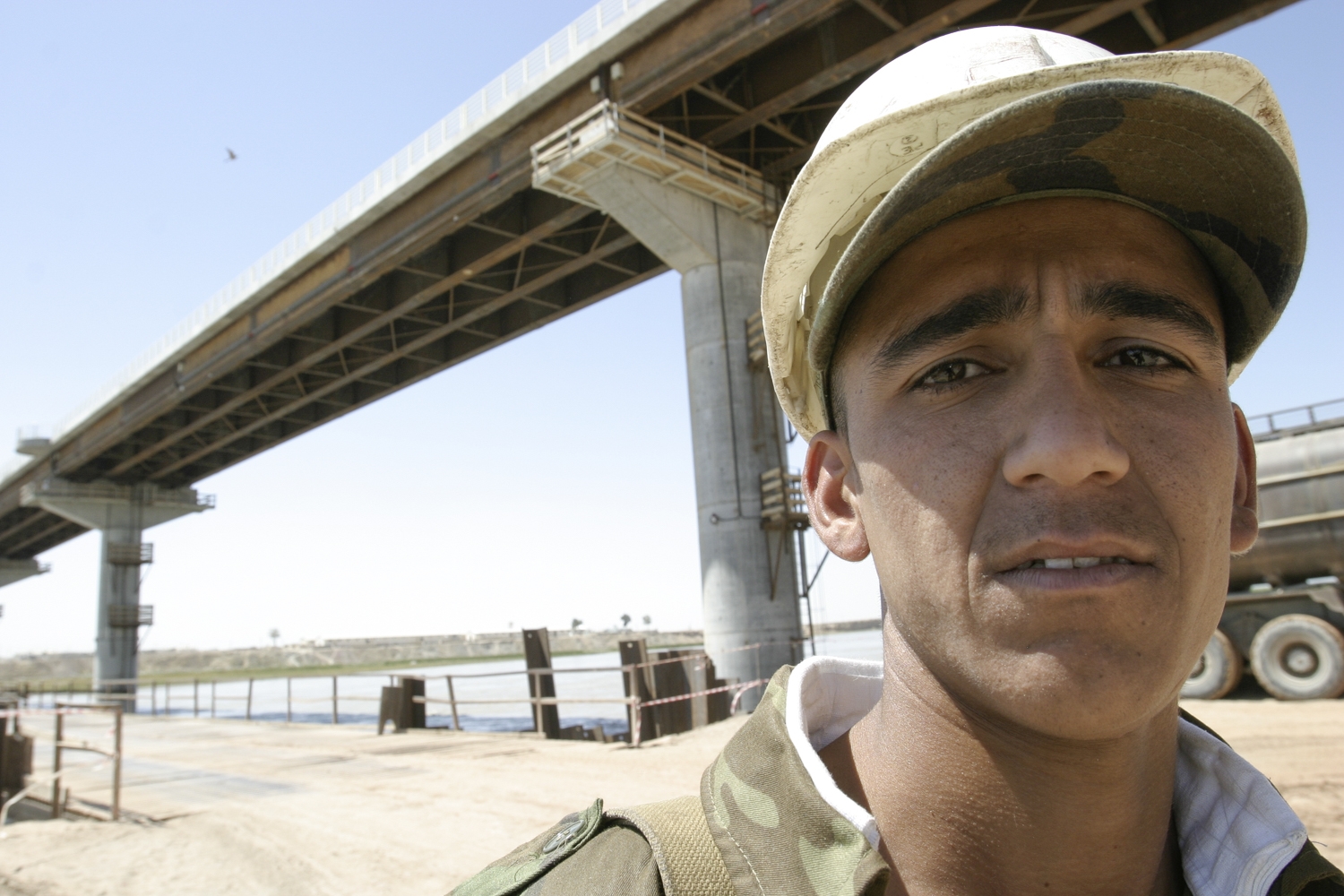 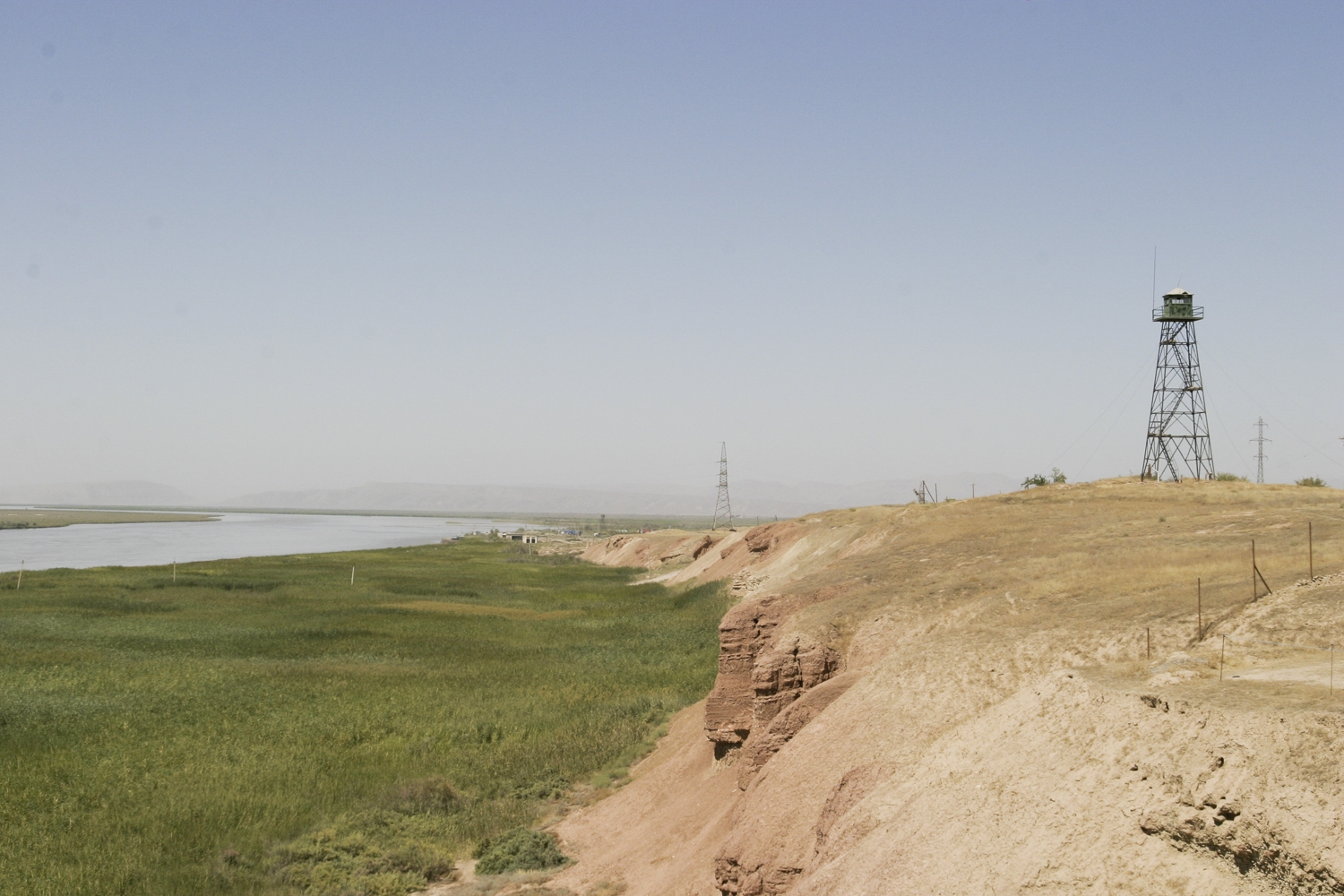 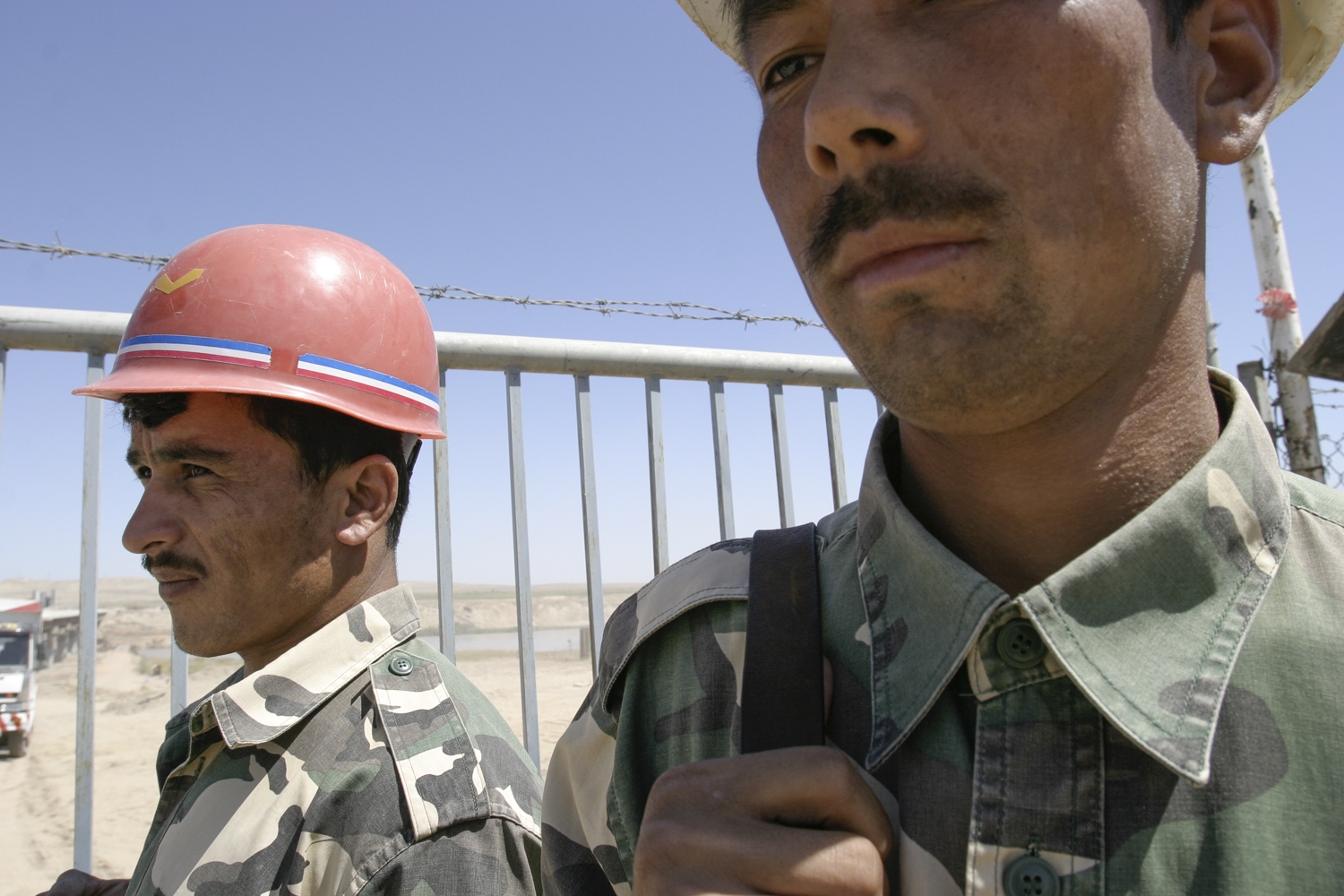 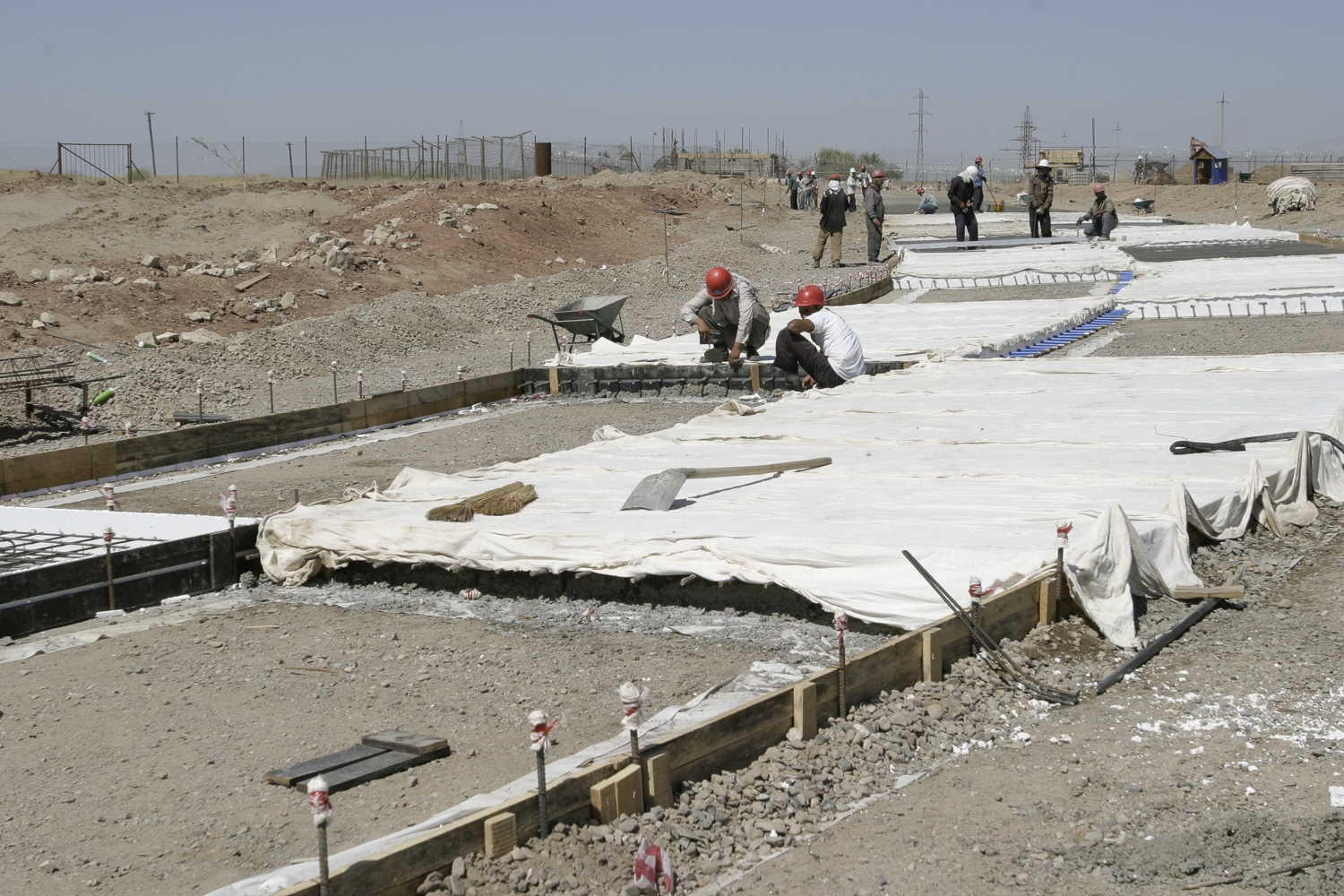 Workers on the Tajik side lay down the final stretch of road to meet the new bridge. (David Trilling) 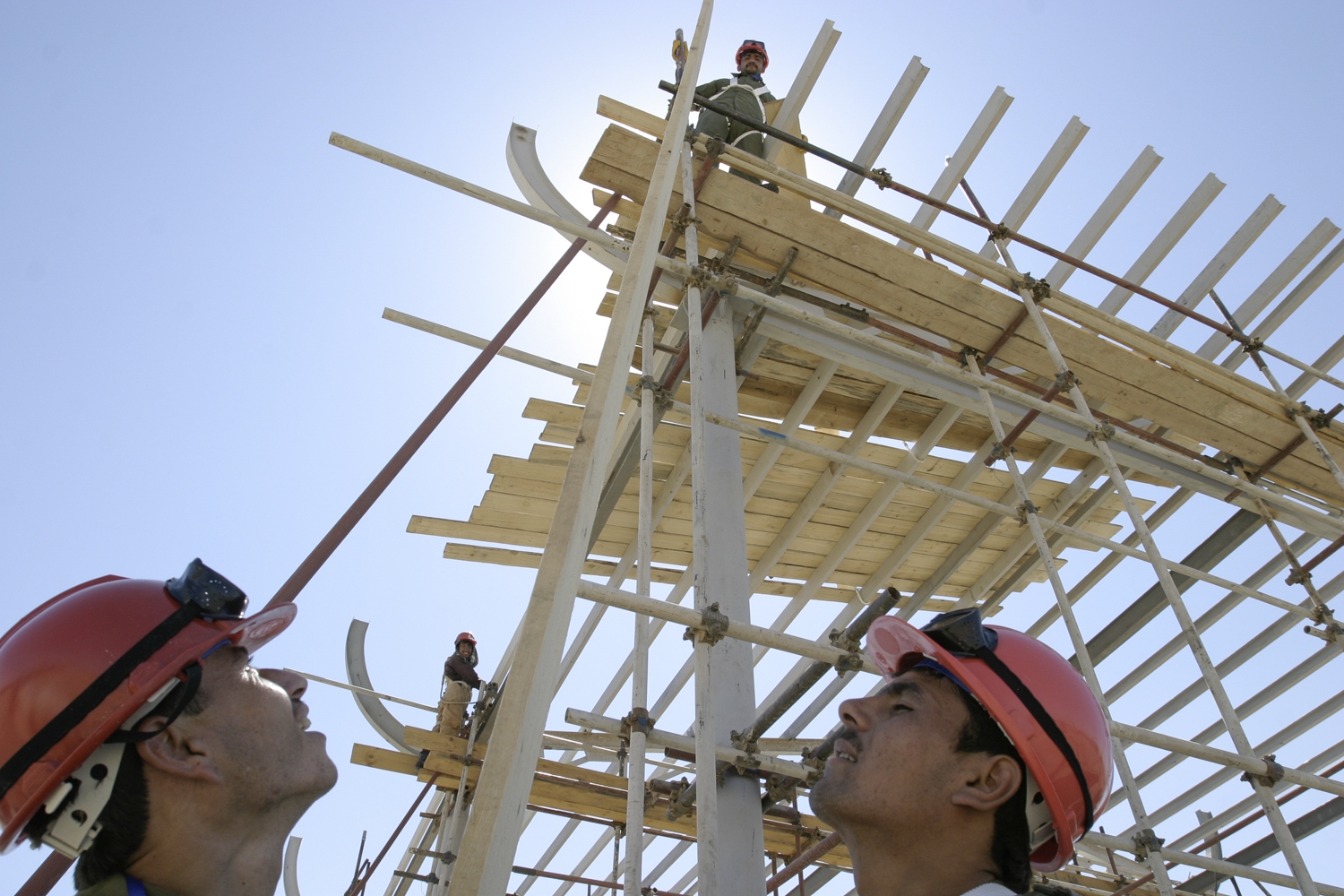 Construction workers build a customs house on the Afghan side. (David Trilling) 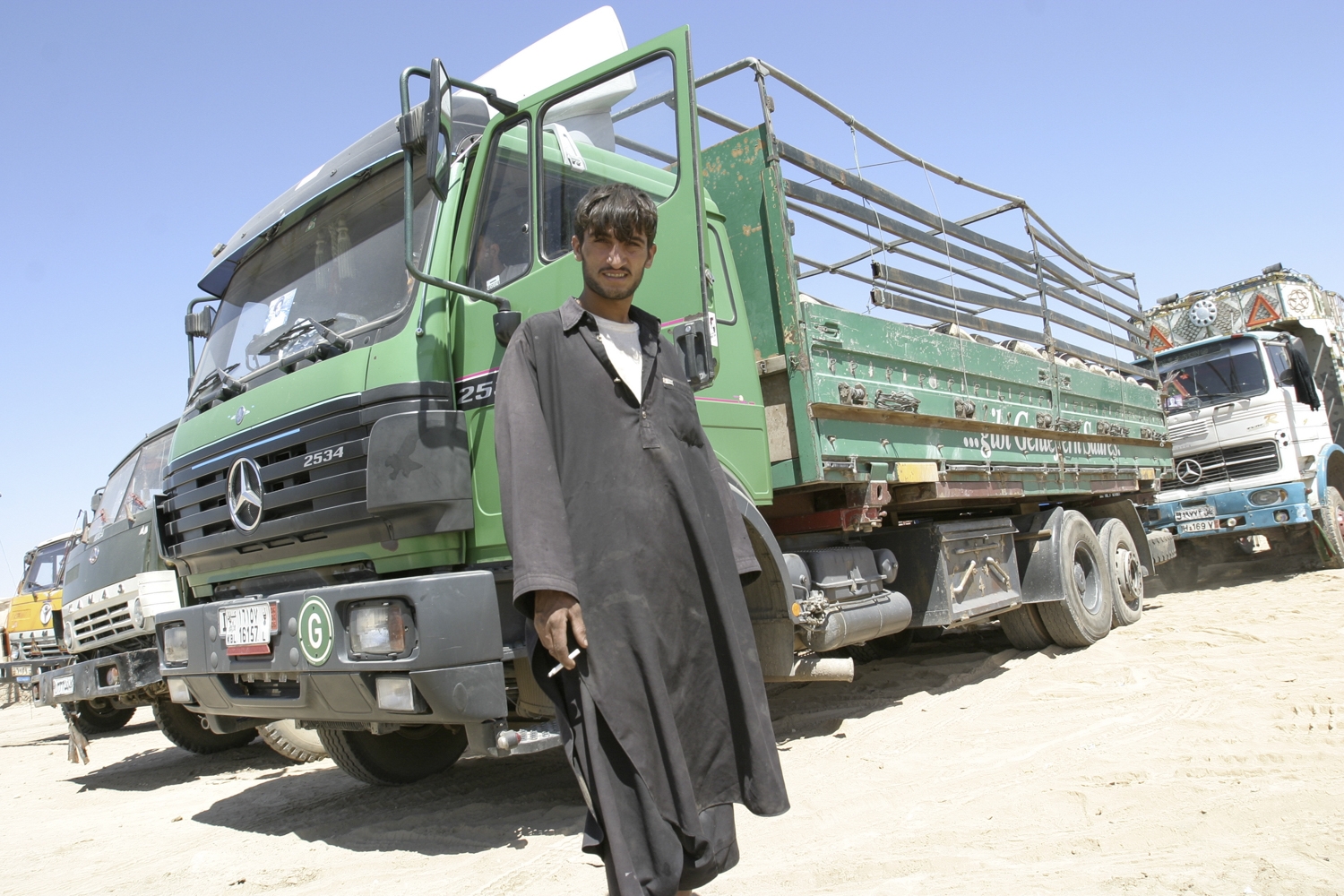 Truck drivers wait on the Afghan side for a boat to ferry them to Tajikistan. The new bridge should dramatically decrease waiting time at the border and increase vehicular traffic. (David Trilling) 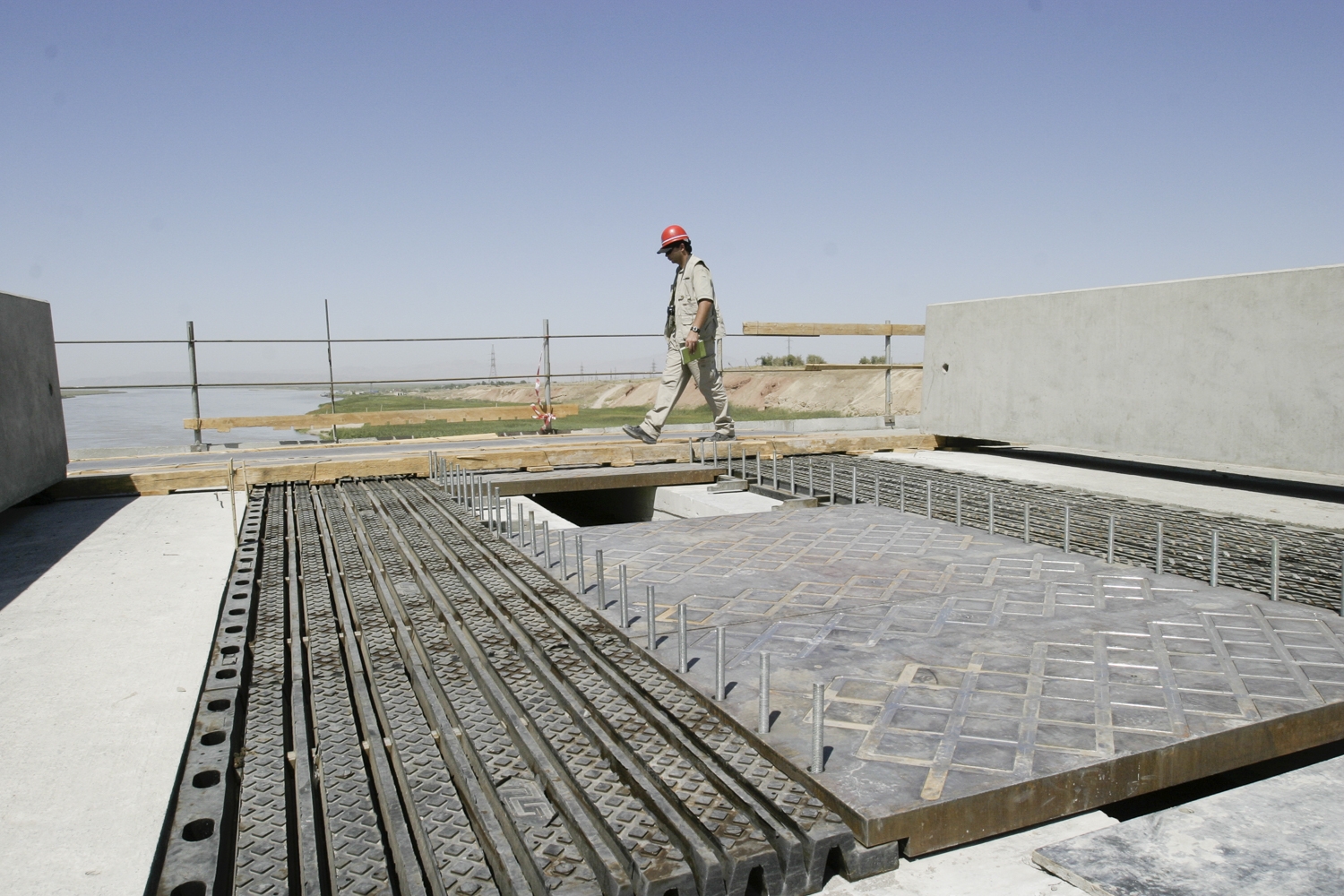 An American contractor walks across the bridge shortly before completion. (David Trilling) 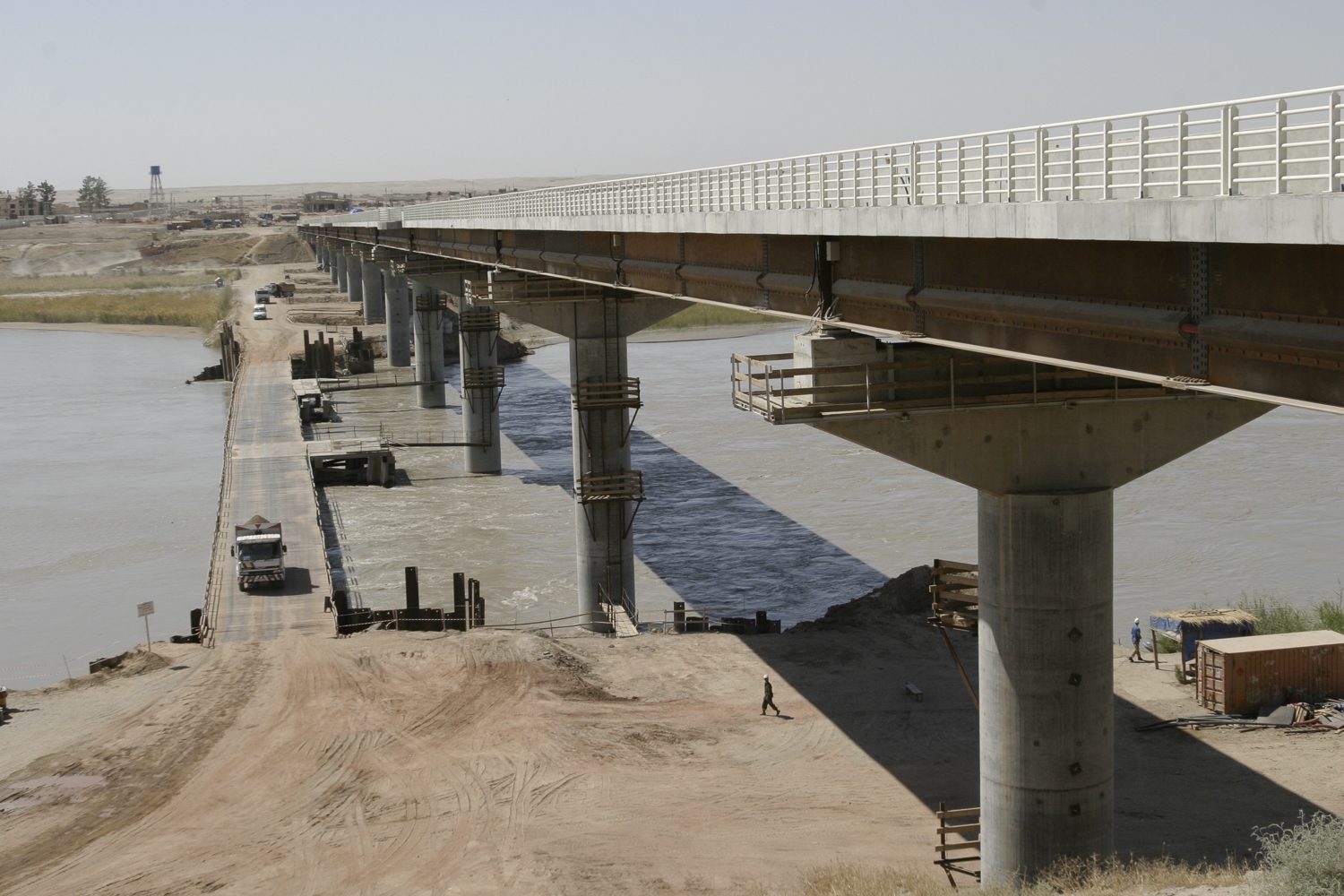 While construction vehicles traverse the Pyanj River on a temporary bridge below, the permanent U.S.-funded structure linking Tajikistan to Afghanistan continues to take shape. (David Trilling)
prev
next

A major new piece in Central Asia’s expanding transportation grid -- a bridge across the Pyanj River connecting Tajikistan and Afghanistan -- is set to open in a few days. The United States, which supplied most of the funding and know-how for the project, hopes the bridge will promote regional stabilization.

The opening ceremony, currently scheduled to take place on August 26, "offers a new era of trade in the region," U.S. Assistant Secretary of State Daniel Sullivan said in an August 14 speech in Ashgabat, Turkmenistan.

In recent years, trade between Afghanistan and Tajikistan has depended upon sporadic ferry service across the Pyanj River, connecting the Tajik city of Nizhny Pyanj and Shir Khan Bandar on the Afghan side. The ferry's relatively small size limited the number of trucks that could traverse the border to roughly 50 per day. In addition, the ferry is not operational for several months of the year due to hazardous currents, according to a 2005 statement issued by the U.S. Embassy in Dushanbe.

According to Tajik and Afghan officials, the new bridge will allow for as many as 1,000 trucks a day to cross the border, greatly increasing the flow of goods between Central Asia and South Asia.

Construction on the $37-million span began almost two years ago. The span stands to especially benefit Tajikistan, where external trade has suffered from a lack of efficient and reliable overland trade routes.

Built to withstand earthquakes and the Pyanj River's swift currents, the bridge contains 13,000 cubic meters of concrete procured from Tajikistan, as well as steel from Russia and Germany, said Brian Walls, a civilian who is overseeing the project on behalf of the U.S. Army Corps of Engineers. In addition to truck traffic, the bridge is also built to handle heavy military vehicles, Walls added. The span is almost a half-mile long.

More than 600 local workers helped build the bridge, with Afghans now helping their Tajik counterparts complete the necessary customs infrastructure. Though the buildings will not be ready in time for the opening, they should be operational later this year.

Since the start of construction, the project has overcome a few speed-bumps, according to official sources, who spoke on condition of anonymity. For example, Tajik officials tried to tax the Italian contractor as much as $6 million against the terms of the agreement. In addition, the Tajik government changed the price of cement, as specified in the original contract, several times, causing delays and headaches for construction crews.

The bureaucratic obstacles did not cause a substantial delay in construction. When the project was originally announced, completion was envisioned in April of 2007.

Sullivan, the assistant secretary of state, pledged that the United States will continue to promote infrastructure development in Central Asia, calling such improvements "critical to regional integration and prosperity." He added that U.S. development assistance will focus not only on bridge and road construction, but also on advances in telecommunications. "Moving ideas and information [among] all peoples of the region with speed and efficiency should be an important goal," he said.

David Trilling is a freelance photojournalist working in Central Asia and the Caucasus.