Burned Twice, Bishkek's Entrepreneurs Are Pessimistic About The Future 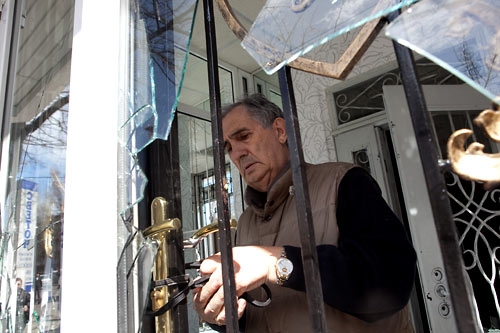 A shopkeeper tries to secure his store. (Photo: David Trilling)

Kyrgyzstan's efforts to finally democratize following multiple bouts of authoritarianism will depend, to a great extent, on the country's small- and medium-sized business owners. These entrepreneurs, a relatively small group in Kyrgyzstan, have the potential to act as a collective engine of economic growth, and by extension political moderation. But right now, the fledgling entrepreneurial class is disillusioned.

To Bishkek's small business owners, looters are an all too familiar problem. Twice in the last five years, sudden political changes have sparked a frenzy of destruction in the capital -- first, during the so-called Tulip Revolution that brought President Kurmanbek Bakiyev to power in March, 2005; and second during the early April upheaval that resulted in his downfall.

More than a week after the violence, many small businesses in Bishkek still stand gutted, or barricaded with scrap metal, smashed windows covered with paper. Will they stick with the system?

"The role of the small and medium business is large here. They create jobs and increase the financial capacity of the people. They allow people to increase their level of income and create jobs," said Aza Migranyan, an economics expert at the CIS institute and professor at the Kyrgyz-Slavic University. "The lootings caused big damage to the business [climate] and certainly the growth rate will fall. The losses are sizable."

A government commission is trying to assess the number of businesses damaged and the value of the destruction.

"From the private sector, a lot of cafes, restaurants, malls and a lot of small shops were destroyed," acting Bishkek Mayor Isa Omurkulov told EurasiaNet.org. "The problem is that there are still some businesses that have not yet registered their losses. ? We should help and support business, because primarily it affected ordinary people and they suffer from it."

The deja vu feeling that accompanied the April 7-8 looting has rattled business owners. Many say they now worry about rebuilding. They anticipate difficulty in attracting new investors or, given the uncertain future, they worry about another round of political dysfunction and economic destruction. Some are ready to give up.

"From my accounts, it will take me three years to restore the capital I lost in one night. Last time when it happened, in 2005, most of the businesses ruined in Bishkek couldn't get back to normal again. I don't even know if there is a point of having business if it happens every time [we have civil disturbances]. Businessmen want to wake up and know their business is safe, and they don't want to wake up in a country where a business gets ruined regularly," said Alla Kim, the owner of a looted food and cosmetics shop in the center of Bishkek.

"We came to the shop at 6 am on April 8 after the [second] night of looting. I was shocked," Kim continued, tears welling up in her eyes. "When I came here in the morning, nothing was left. They took everything. They even took the broom, basin and water in the bucket. Who needs these things? I rent this facility. ? Everything is broken. Now we are counting the damage. Overall it amounts to $40,000 -- 30 percent of that money was a loan. I don't know how I will pay it back."

Some shop owners stood guard through the rampage and for several nights after. Some shops still bear signs reading, in Kyrgyz, "biz el menen," or, "we are with the people," to try to stave off the marauders.

Some shop owners had luck on their side; before looters hit their stores, they emptied their stocks and moved supplies to a secure location. Others experienced some harrowing moments. Mira Alymkojoeva, the owner of small food and produce shop in downtown Bishkek, recalls April 7-8 as a "nightmare."

"I closed my shop at 3 pm on April 7 [just as the shooting began on Ala-Too Square, a few blocks away]. I wasn't able to hide my goods as the looters approached, so at night my brother, my mom, my husband and I came down here to protect the shop, the only business that brings bread to my table. There was a crowd of 300 men outside. They were drunk, you could see that," she said.

Alymkojoeva foresees Kyrgyzstan losing a lot of foreign business. "My husband is Turkish; he said he will never open any other shop or any other business in Kyrgyzstan because it is impossible to work here. It's either lootings, or pressure from other departments," she said alluding to corrupt officials. "Most foreign business people are planning to leave the country."
With the provisional government still struggling to extend its authority across the country, and given the fact that parliament and some state agencies are not functioning, there appears to be no means to provide quick state support to entrepreneurs who have suffered losses. The local business community is trying to create some mechanisms to quantify the damage and offer aid.

Many local entrepreneurs remember the government's disjointed response to looting in 2005, and those memories do not inspire confidence. "That last experience showed how ineffective authorities couldn't help businesses get back up," Uluk Kydyrbaev, director of Bishkek Business Club, told EurasiaNet.org. "Now, we have to make sure that business people will get help from the government. We are proposing the creation of a coordination council that will have the power and authority to compensate damaged businesses."

Migranyan, the economics professor, said the new interim government could spark growth and increase confidence by "compensating losses to businesses. Then maybe the restoration process will be faster."
But shop owners are pessimistic. "I am not expecting help or any compensation from anyone. I am 100 percent sure that no one will help us," said Kim.

"I hope the situation stabilizes. We'll see. If a good president comes to power, we will work; if not, then we will start thinking what else to do," said Kubanychbek Medinov, owner of a kiosk selling soap and domestic cleaning solutions in Bishkek.

"At the moment we lack safety and stability. Those are the two main guides for doing successful business," Kydyrbaev of the business club said.