While the country’s public defender says the group’s activities violate the constitution, others argue that banning it could set a dangerous precedent. 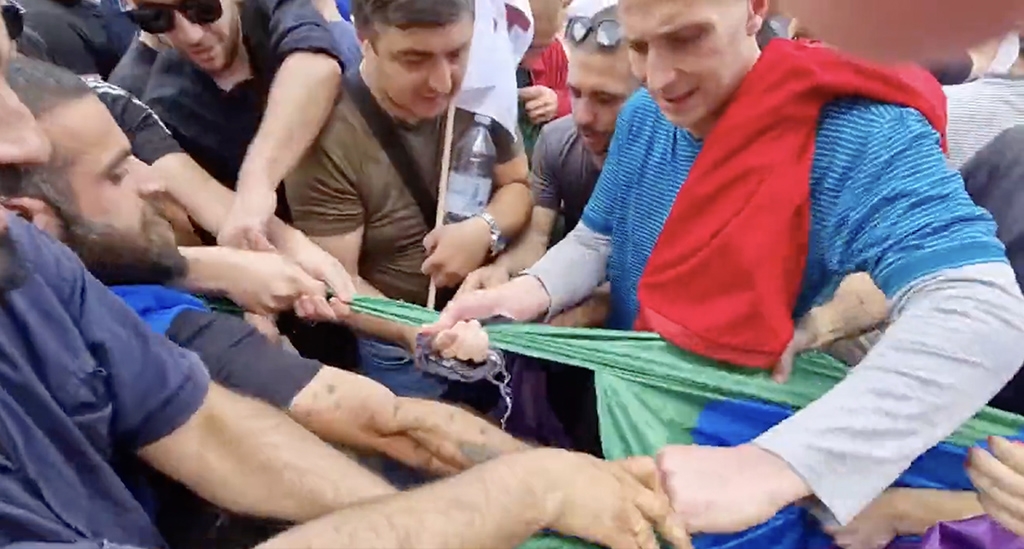 The question has reemerged as its leaders continue to enjoy impunity for leading a wave of homophobic violence a year ago.

Apparently despairing of any other options, Georgia’s public defender has said she is preparing a case arguing that the party, Conservative Movement, should be banned as its activities violate the constitution.

“Many of their earlier and recent statements contain indications of overthrowing the constitutional order, inciting various types of strife, encouraging violence or themselves bear indications of violence and amount to war propaganda,” Nino Lomjaria said in a July 5 statement, referring to provisions in the constitution that ban parties on those grounds.

The statement came on the one-year anniversary of a wave of homophobic attacks led by Alt-Info, a far-right, anti-Western activist group that had risen to notoriety through its ultra-conservative TV channel. Dozens of journalists were attacked, but Alt-Info’s leaders have not faced any repercussions.

While 27 suspects in the violence have been prosecuted, no Alt-Info leaders have faced charges for organizing group violence despite clear public evidence incriminating them, Lomjaria said. “The organizers have not been punished and continue to take part in new illegal activities,” she said in the statement.

Instead, they have continued to expand and in November formed their own political party, Conservative Movement. They have opened dozens of party offices across the country over protests from locals.

Now, Lomjaria says her office has prepared a lawsuit to outlaw the party. But she is not authorized to file the suit, and she said she will hand the case over to someone who does have a mandate to take it to the Constitutional Court. That could mean the government, the president, or at least 30 members of parliament.

Georgian opposition deputies have pondered such a possibility since the group began to discuss forming a party last year.

“I will find my 29 colleagues with whom I will ask the Constitutional Court to abolish this party,” Ana Natsvlishvili, a lawmaker from the opposition party Lelo for Georgia, said in November. Other parties, including the largest opposition force United National Movement (UNM), seemed to agree.

But not everybody was on board. Giga Bokeria, leader of the opposition European Georgia party, said he feared that a ban could endanger freedom of expression and could set a dangerous precedent.

“If we read the [Constitutional provision] in a sense that we can ban those whom we see as a threat to the country’s territorial integrity or because of inciting strife, then the current government will be able to ban existing opposition parties as well,” he told RFE/RL last year.

And the recent rhetoric of the ruling Georgian Dream party, portraying its opponents as war-mongering forces, feeds fears that other opposition parties could be next.

Asked about a possible ban of the Conservative Movement on July 6, Kakha Kaladze, Tbilisi mayor and secretary general of Georgian Dream, responded: “Those who incite strife and confrontation in Georgia are the [United] National Movement and its satellites.”

Adding to those concerns: Georgia’s Constitutional Court, like the rest of the country’s judicial system, is widely considered to be under ruling party influence.

President Salome Zourabichvili, too, appears to have some reservations.

“In a country built on democratic principles, the ban needs to be the last, extreme step supported by strong legal arguments in order not to leave any doubts of infringing on the freedom of speech and expression,” she wrote on Facebook on July 5.

Still, she left the door open: “However, based on the same principles of democratic countries, it may still become necessary to make such a decision.”

While democracies in other parts of the world have similar constitutional mechanisms in place to ban anti-democratic political parties, those are applied rarely and with caution, with debates centering on how democratic – or effective – such measures can be.

Zourabichvili said the priority for now should be holding the perpetrators of last year’s violence responsible, controlling the group’s activities, and identifying their funding sources.

A lack of transparency in its finances and suspicious patterns in donations to the party have long alarmed Georgian watchdogs. The ability of a brand-new party to open multiple offices around the country and operate a television station has raised questions about where its money comes from.

Alt-Info’s support of better relations with Moscow, and party leaders’ regular meetings with Russian political figures, have only added to those suspicions.

But it is their suspected links with the Georgian authorities that some find just as worrying.

The impunity of Alt-Info leaders, and the past ability of far-right groups to scare away civil protests, have given rise to a belief that the Georgian Dream may not only tolerate, but also use such groups to its advantage. A recent investigation by pro-opposition Pirveli TV claimed that the State Security Service helped stage last year’s attacks

The ruling party denied the accusations.

“We certainly have no sympathies for Alt-Info, all the more so after they came to [Georgian Dream’s] office and cursed at us,” Georgian Dream chairman Irakli Kobakhidze told reporters on July 6.

That referred to an episode from this year’s Pride, when police stopped far-right groups from disturbing the events and the groups gathered at the ruling party headquarters to protest the crackdown.

This year has indeed seen a noticeably stronger response by the government against the group. In June, a court fined the Conservative Movement GEL 217,000 ($75,000) after a state audit found irregularities in their financial declarations, including concealing donations.

During this year’s Pride week early in July, police detained dozens of Alt-Info members, including some leaders, who had again gathered to obstruct the events.

There are countervailing trends, however: On July 4, three men prosecuted for storming and vandalizing LGBT activists’ office during last year’s attacks were given lighter-than-expected sentences, as the court declined to convict them of hate crimes.