Can a reclining Georgian nationalist fake his way to the top?

Netizens took selfies with breathing tubes to poke fun at the far-right leader. 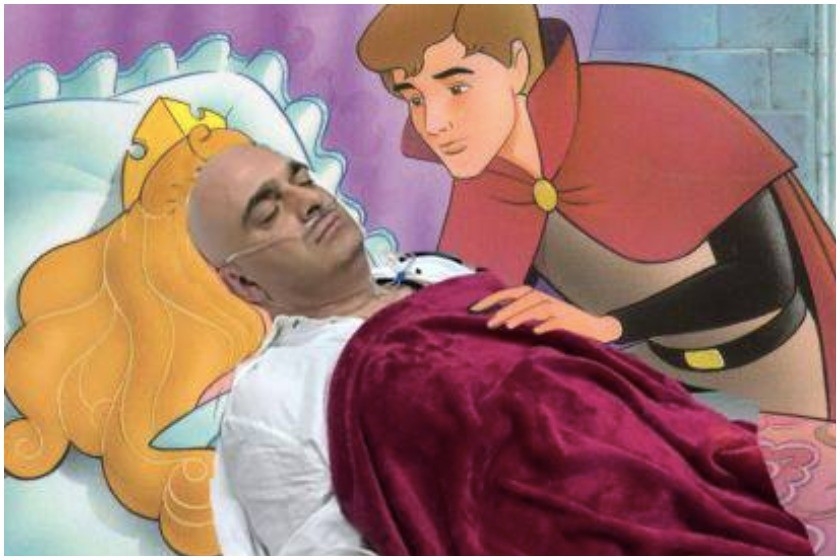 Bregadze as Sleeping Beauty, with what doctors say are unnecessary oxygen tubes. (facebook.com/geocomicses)

An unusual meme swept Georgia’s internet last month. Netizens were posting photos of themselves as they lay flat on their backs, eyes closed, oxygen tubes stuck in their noses.

They were poking fun at aspiring right-wing leader Sandro Bregadze, a candidate in presidential elections this fall. The anti-immigration crusader had claimed he was manhandled by police and suffered a concussion following a rowdy March 19 rally of his far-right group, the Georgian March.

Police dismissed his claim as “utterly false,” but Bregadze offered a hospital photo as proof. His doctors, however, said that examinations showed he had no injuries whatsoever. Still, Bregadze insisted on staying in the hospital. “We can’t tell you how long this situation will go on,” doctors at Tbilisi’s Gudushauri Clinic said. “We’ve never had a case like this.” He has since checked out.

The internet responded, with scores poking fun of the supine ultranationalist. Some even posted photos of their kids and pets in various dramatic positions. “My cat was doing Bregadze before it was cool,” one Facebook user wrote under a photo of his cat lying on her back, paws up.

The original, Bregadze-in-hospital photo was also reworked. Dominating social media news feeds for almost a week, Bregadze was portrayed as Walt Disney’s Sleeping Beauty and Snow White, as renaissance figures (Venus of Urbino, the Birth of Venus), and as a character from the TV show Game of Thrones.

Unfazed, Bregadze announced last week his plans to run in this year’s presidential election and, in his own words, on a “Marine Le Pen”-style platform. Like the conservative Frenchwoman, Bregadze takes a hard line on immigration. He has led rallies against immigrants – mainly from Islamic and African countries – and also styles himself as a champion of Christian Orthodox values.

Like a handful of other Georgian politicians, Bregadze is trying to tap into the strong conservative undertow that pulls against liberal reforms in Georgia. The progressive part of Georgian society fears that with the emergence of groups like Georgian March, the nation could fall back into the isolation and nationalistic chauvinism that marked the early post-Soviet years.

But it is unclear if Bregadze, a perennial gadfly, is the figure to unite Georgia’s right-wing factions. No opinion polls have measured his popularity. His opponents variably view him as menace or as comic relief.

Once a loyalist of banished regional strongman Aslan Abashidze, Bregadze relatively recently reinvented himself as an ultraconservative leader. His bid for a parliamentary seat failed in 2016 when he ran on an anti-same-sex marriage ticket, even though Georgia has never seriously considering allowing same-sex weddings. On the eve of the polls, he drove around Tbilisi with a bullhorn urging residents to vote for him to stop the city’s imminent “takeover” by homosexuals.

This February, Georgian March announced it was forming vigilante groups to hunt down foreigners, who, they claim, engage in acts of sexual depravity in Tbilisi by night. The groups have not caught any of these supposed licentious visitors yet and there are doubts that they are actually doing the patrolling.

Last week, Bregadze and Georgian March threatened to go on a “deadly” hunger strike to protest the imprisonment of several members for attacking journalists during the March 19 rally.

To be sure, he and his supporters have dabbled in “deadly” hunger-strikes before. Last fall, Bregadze announced “the largest and the most deadly hunger strike since Mahatma Gandhi” to demand tougher immigration laws and a same-sex marriage ban. Though snubbed by the authorities, Bregadze made it into 2018 alive and apparently well-fed.

Now he explains that his earlier hunger strikes were more like a “diet” and that this time it’s for real. His plan, unless his supporters are freed, is to “starve to death,” like the “Irish patriots did in 1981.”

Bregadze’s presidential odds may be hard to predict at this stage, but he is certain to inspire more memes if he survives the latest deadly hunger strike.