Can Karabakh Pull Back from the Brink? 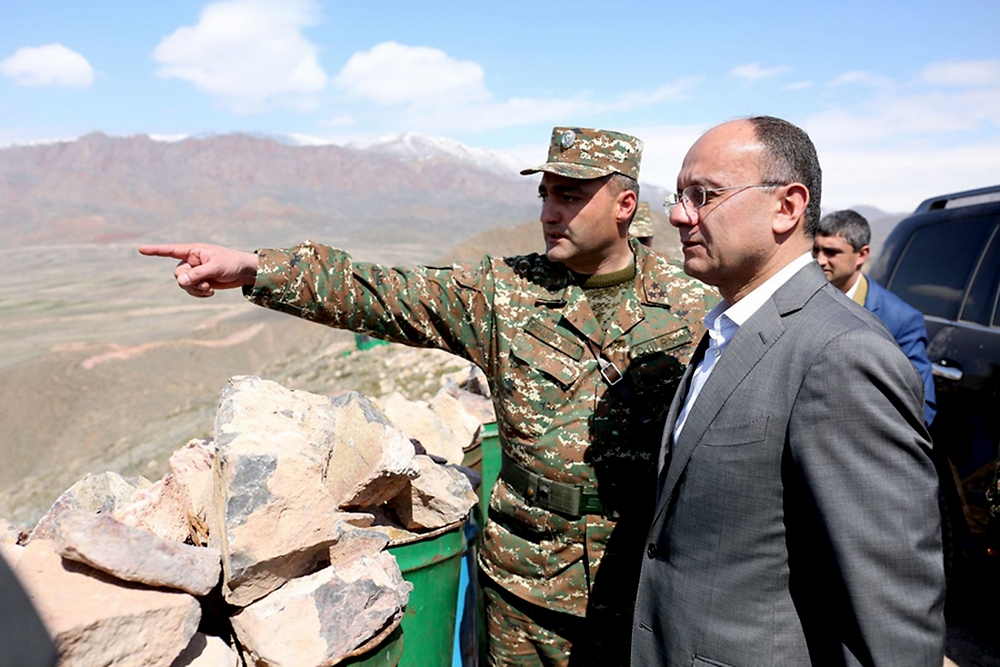 Armenian Defense Minister Seyran Ohanyan (right) visits troops in late March 2016, just a few days before the eruption of the deadliest combat between Armenian and Azerbaijani forces since the signing of a ceasefire agreement in 1994. (Photo: Armenian Ministry of Defense)

After a long simmer, the Nagorno-Karabakh war has once again boiled over. And turning off the heat at this point may not be so easy.

Three days of fighting have left dozens dead and dozens more wounded. It marks the bloodiest combat between Armenian and Azerbaijani forces since the signing of a ceasefire agreement in 1994. International mediators for the OSCE Minsk Group – which is led by the United States, France and Russia, and is responsible for trying to broker a lasting Karabakh peace settlement – were scheduled to convene April 5 in Vienna to discuss responses to the renewed fighting.

The situation all along the so-called contact line, the boundary separating Armenian and Azerbaijani forces since 1994, remains fluid, with details concerning casualties and territories changing hands impossible to independently verify. In the early evening of April 4, Azerbaijan’s Defense Ministry claimed their forces had “neutralized up to 170 Armenian servicemen and 12 armored vehicles” in combat throughout the day. According to Armenian official sources, the three days of fighting have left 20 Armenian soldiers killed in action, 76 wounded and 26 missing. There are also numerous reports of civilian casualties, including an alleged massacre of several elderly Armenian residents of the border town of Talish. In addition, a funeral was held April 4 in the village of Her-Her for 12-year-old Vaghinak Grigoryan, who died while reportedly heading to school.

The explosion of violence on April 2 followed a prolonged period of escalating tension along the frontlines, including frequent firefights and occasional casualties. For the past several years, experts have warned about the rising chances of renewed warfare.

Azerbaijan’s Defense Ministry stated all of the country’s positions along the frontline had experienced heavy shelling over the weekend. The tensest areas were Aghdere, Tartar, Aghdam, Khojavend, and Fuzuli, according to military officials.

Thousands of Azerbaijani citizens living near the contact line have been evacuated to towns farther away. One evacuee was 36-year-old Ulviyya Aliyeva, who was at home in the village of Azad Karakoyunlu in Tartar District when the fighting erupted. When the fighting started, several families gathered in a house that they believed to be out of the line of fire. But Aliyeva reported being wounded by an explosion that shattered windows and sent shards of glass flying about the room in which she was sheltering.

“We would have all been blown up if the bomb fell a meter closer. Shrapnel made holes in the walls. The ceiling is shattered as well,” Aliyeva told EurasiaNet.org on April 4.

Male villagers have remained in the town to help with defense efforts. Women and children have been removed from Azad Karakoyunlu, she said. “We are now in the neighboring village, but you can still hear the sound of shooting from here,” she added.

The fighting erupted while both Azerbaijani President Ilham Aliyev and his Armenian counterpart Serzh Sargsyan were in Washington, DC, attending a March 31-April 1 Nuclear Security Summit. This fact prompted some observers in Baku to suspect Russia of stoking the conflict as a means of reasserting its geopolitical primacy in the region.

“Whenever Azerbaijan takes a step towards the West, Russia shows itself. It happened right after the presidents of Armenia and Azerbaijan held meetings with US officials,” political analyst Zardusht Alizade.

Stirring up hostilities could be Russian President Vladimir Putin’s way of telling Armenian and Azerbaijani leaders that “I [Putin] am the lord of this region [the South Caucasus],” Alizade added, without providing any facts that could substantiate claims of Russian meddling.

Russian media outlets have kept up a steady stream of alarmist reports about the conflict, most of it, arguably, targeting Azerbaijan and its close ally, Turkey, now a bitter foe of Moscow. The Russian government-linked LifeNews went so far on April 4 as to claim that “around 60” Azerbaijani terrorists affiliated with Islamic State were returning home from Syria to take part in the conflict against Armenian and Karabakhi forces.

For Azerbaijani MP Ali Ahmadov, deputy chairperson and executive secretary of the ruling New Azerbaijan Party, such coverage means that Russia is taking sides in the conflict. “Russia is one of the co-chairs of the OSCE Minsk Group. The mediator should be neutral. From this point of view, it’s impossible to understand the essence of anti-Azerbaijani propaganda,” he told reporters.

Most Armenians consider Russia to be their country’s strategic ally. Nevertheless, some in Yerevan are wary of Moscow’s perceived priorities concerning the Karabakh conflict.

Political analyst Aghasi Yenokian, director of Yerevan’s Armenian Center of Political and International Relations, believes that, after leaving Syria, Russia is searching for new tools to assert itself, and the Karabakh conflict provides many opportunities.

“Russia, with its active response, shows that if the OSCE Minsk Group works slowly, [and] international structures work slowly, then a serious chance opens up for Russia to resolve [the] Karabakh conflict in a Russian way; that is, by putting Russian peacekeepers on the [ground],” he reasoned.

Reports surfaced in late 2015 that Russian Foreign Minister Sergei Lavrov had proposed international peacekeepers to both Armenia and Azerbaijan. The potential presence of Russian “peacekeepers” in and around Karabakh would not necessarily be a welcome development for Yerevan, Yenokian said, adding that Azerbaijan may believe it could outmaneuver Armenia to curry favor with Russia and thus “get territory and solve issues with such a solution.”

The renewed fighting has caused a surge in patriotic feelings, and the public to unite around President Sargsyan’s administration. Hundreds, if not thousands, of men across the country have volunteered to go fight in Karabakh.

Decked out in combat fatigues and carrying rifles, elderly, white-haired men, often singing patriotic songs, have been boarding buses throughout Armenia to head to the frontline. Lines also have formed at medical institutes, where people are registering to give blood, even though specialists say there is no need at present.

Like men filmed by RFE/RL in Yerevan, many of Armenian volunteers gained combat experience when all-out warfare raged between Armenia and Azerbaijan over Karabakh from 1988-1994. Veteran volunteers are tending to organize their own transportation to the front.

“The past two days have shown that our society is united when the matter refers to the motherland,” commented 35-year-old communications technology professional Armen Sarukhanian. “I have not seen such unity and enthusiasm for a long time, when everyone unites as one and stands up for a common goal.”

Civil activist Christine Asatrian, 33, added that she is pleasantly surprised that “people are so alert and conscientious and ready.”

“This is the case when people do not think of the policy run by oligarchs or the government or the like. They get united for the sake of the motherland, putting aside everything,” she added.

In 2014, both sides managed to pull back from the brink after frontline clashes led to the deaths of roughly 20 soldiers on both sides. But the conditions that encouraged restraint two years ago may have changed, according to Elkhan Mehdiyev, the director of Baku’s Peace and Conflict Resolution Center.

“Peace for Azerbaijan means the liberation of its territory, restoration of its sovereignty and peaceful coexistence [with Armenia],” Mehdiyev said. “A ceasefire is not peace.”

Marianna Grigoryan is a freelance reporter based in Armenia and editor of MediaLab.am. Durna Safarova is a freelance journalist who covers Azerbaijan.