Can Kazakhstan Contain Corruption in Its Olympics Bid? 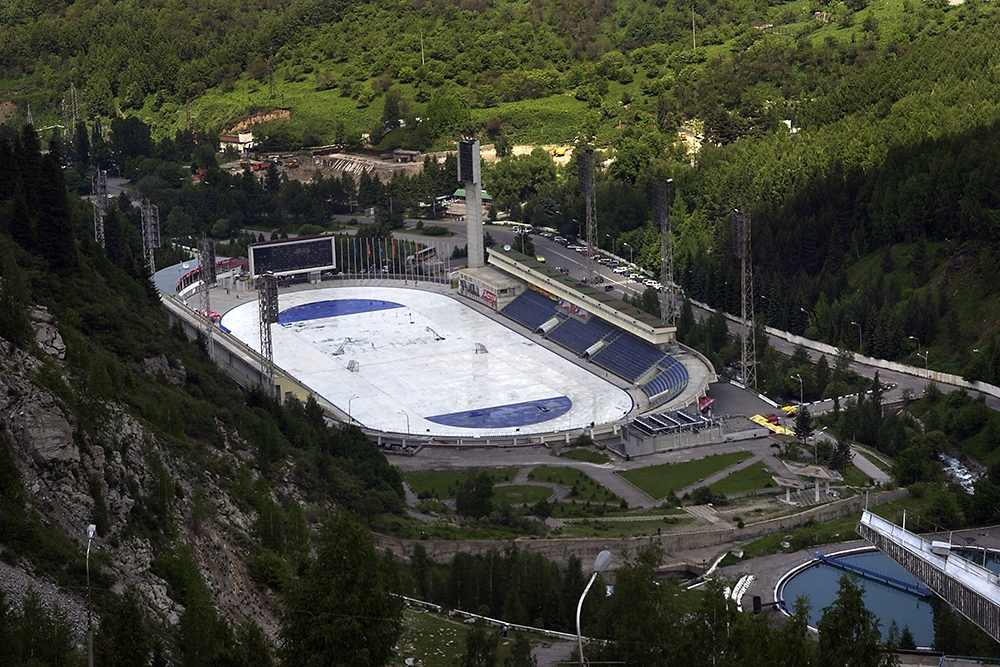 The Medeu speed skating ring lies between the winter sports resort of Shymbulak in the Tian Shan mountain range and Almaty, which has put in a bid to host the 2022 Winter Olympics. Medeu is one of 10 venues that Almaty is presenting to host various sports and ceremonies in the global sporting event. (Photo: Dean C.K. Cox)

Few Kazakhstanis were surprised when a top organizer of the 2011 Asian Winter Games, the biggest sporting spectacle the country has ever held, was jailed last October. Aidar Musin was found guilty of using $3 million in state funds earmarked for the event to buy himself luxury cars and prime real estate.

With Kazakhstan now bidding to host the 2022 Winter Olympics, local transparency activists fear that one of the world’s biggest-name sporting events would again prove a bonanza for sticky-fingered officials.

The International Olympic Committee Evaluation Commission visited Almaty from February 14-18 to assess the city’s 2022 bid. Under new IOC rules introduced in December, known as the Olympic Agenda 2020, potential host cities must now keep costs under control, ensure sustainability, and leave a lasting legacy for future generations. But there are no specific guidelines for combating fraud.

Corruption helped inflate the costs of the Sochi 2014 Winter Olympics in Russia from $12 billion to $51 billion, according to Transparency International (TI), a watchdog. Kazakhstan – where, like Russia, the construction sector offers an easy way to line one’s pockets – is no stranger to graft. TI ranks the Central Asian nation at 126th out of the 175 countries surveyed in its most recent Corruption Perceptions Index.

Despite numerous government-led anti-corruption campaigns since 1998, Kazakhstan’s score has shifted little on the TI index. “Corruption is widespread and systemic in Kazakhstan,” Zhanibek Khassan, director of the Zertteu Research Institute, an Almaty-based organization that monitors governance issues, told EurasiaNet.org. “The corruption fighting and prevention activities are very weak.”

Almaty 2022 bid vice chairman Andrey Kryukov was reluctant to discuss Sochi when asked how his city’s bid could avoid the same kinds of corruption problems that plagued the 2014 Games. “We do not have the facts on hand to discuss” what happened there, he said, responding to a question from EurasiaNet.org at a February 18 news conference. “Probably there were some things like that [corruption], probably not.”

Kryukov stressed that external scrutiny will be applied to tenders if Almaty’s bid is successful. “The system is going to be constructed in such a way so that we are going to have a public council set up and it is going to work with the organizing committee when it comes to the construction of venues,” he said.

The council would include public organizations, as well as international consultants, to “enable us to have an outsider’s view on all those issues,” he added.

Khassan praised the increased scrutiny. “The watchdog activities of the international and national civil-society organizations are vital for preventing corruption,” he said. But, he insisted, the IOC needs to take responsibility for oversight as well.

Some observers criticized Almaty’s choice of Alexander Vinokourov as an Olympic ambassador, noting that a confirmed cheater sends a mixed message about dedication to transparency. Vinokourov, an Olympic gold medal-winning cyclist, had been banned from the sport for two years for doping at the Tour de France in 2007; he went on to win gold in London in 2012. Vinokourov ended up stepping down two days after the IOC wrapped up its visit.

But many Kazakhstanis still see Vinokourov as a national hero, despite the doping scandal and accusations of race fixing. “Heroes are forgiven many things,” Geniy Tulegenov, editor of sports news portal Sportinfo.kz told EurasiaNet.org. “In Kazakhstan, he is still an idol and all the successes of the Astana cycling team are associated with his name and reputation.”

Almaty is in a two-horse race with Beijing to host the Games after a number of European cities pulled their bids last year over concerns about Sochi’s huge costs.

Questions about financing have surged to the fore in Kazakhstan in recent months. With tumbling oil prices and the crisis in neighboring Russia, Kazakhstan’s largest trade partner, the government has promised to make budget cuts. Earlier this month, President Nursultan Nazarbayev ordered spending cuts of $3.8 billion, or 10 percent of the budget originally allocated for this year.

Astana proposes to spend around $3.5 billion on the Almaty Games. Despite belt-tightening measures elsewhere, this estimate is unlikely to be cut as officials see the Olympics as a way to burnish Kazakhstan’s international image.

Nevertheless, fears persist that corruption could bump up the Games’ cost. Two recent high-profile cases show how corruption permeates every segment of Kazakhstani society – from the most vulnerable to those at the very top.

In January, the Global Fund to Fight AIDS, Tuberculosis and Malaria reported that public health officials in Kazakhstan conned the organization out of more than $5 million through a network of “smokescreen companies” used to rig bids and overcharge for goods and services.

In another recent case, Serik Akhmetov, who was prime minister from September 2012 to April 2014, stands accused of a number of crimes including taking a $2.4 million bribe while he was in charge of Karaganda Region.

While the case of high-roller Musin stealing $3 million was the only case of fraud at the 2011 Asian Winter Games to play out in a courtroom, other budgetary irregularities have subsequently come to light. Plans for the reconstruction of the Shymbulak ski resort for those games originally included a swimming pool and training facilities. The $200 million allocated for the reconstruction project was all spent, but the pool and training base were never built.

Khassan called for greater transparency to ensure contracts are not awarded to the organizers or affiliated companies, as it happened in the Musin case. “The organizing committee should submit to the related governmental agencies the information on his [or] her income, property and expenditures. This recommendation should also apply to the relatives of these managers. Moreover, of course, this information should be disclosed,” Khassan said.