Can Kyrgyzstan’s president take a joke?

Jeenbekov has been at pains to strike a different note from his thin-skinned predecessor, but some habits seem hard to break. 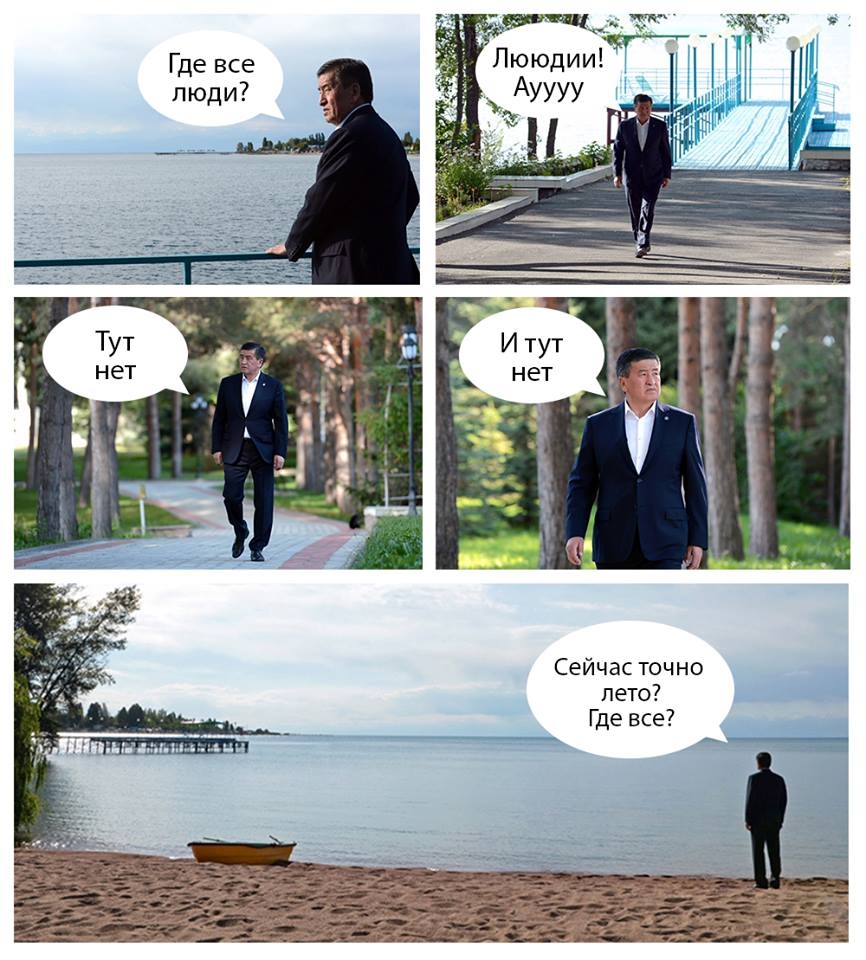 The president of Kyrgyzstan has a sense of humor. For now.

When the presidential administration press service published a series of photos on Facebook showing Sooronbai Jeenbekov ambling alone around a government-run summer resort on the shores of Lake Issyk-Kul, Bishkek graphic designer Nikita Tarasenko sensed a meme in the making.

Tarasenko took the photoshoot of a notably unaccompanied Jeenbekov, decked out in a formal suit, and added speech bubbles.

“Is it really summer? Where is everyone?” Jeenbekov asks in the final photo as he stares forlornly across the lake.

The gentle mockery was intended to highlight the artificiality of the public relations stunt and, perhaps, to dwell on Jeenbekov’s notably aloof manner. What Tarasenko could not have imagined was that his Facebook post would spark a public conversation about inter-ethnic relations and the limits of free speech, as well as earn him the attention of state prosecutors.

Some of the indignation at Tarasenko’s ribaldry was grass-roots. In a variation on the looking-out-at-the-lake meme, Tarasenko showed Jeenbekov haplessly rehearsing a common Russian-language phrase – “my dear fellow compatriots” – that he flubbed during his inauguration speech last year.

The trivial verbal trip-up that inspired the meme had provoked much mirth among Russian speakers, but this kind of linguistic ribbing often irritates people whose first language is Kyrgyz. Those sensitivities were on full display in social media criticisms directed at Tarasenko in which his ethnicity and loyalty to the state were questioned.

On September 29, nearly two months after Tarasenko made his Facebook post, the state prosecutor’s office called him in for questioning. This set off another swell of indignation – this time from media outraged at what appeared to be an overreaction to some light satire.

In protest at Tarasenko’s summons, one online outlet, Kloop.kg announced a contest for readers to create their own Jeenbekov memes.

“We, the people of Kyrgyzstan […] will prevent the emergence of a cult of personality in our country. We will not allow the president to become sacred and untouchable,” the announcement read.

Tarasenko was bewildered by the episode. He told Eurasianet in a brief telephone interview that he did not think his memes were offensive and said he only intended to make people laugh.

But then as Bishkek’s chattering classes began lamenting the first blow to freedom of expression under the rule of Jeenbekov, who came to power in November, something strange happened. The presidential press service disavowed the prosecutor’s actions, calling them “an unpleasant surprise.” Not only had Jeenbekov not taken offense at the meme, he had actually enjoyed it, his office said on October 1.

“President Jeenbekov’s sense of humor is doing just fine,” the statement read. A day later, the prosecutor’s office dropped its investigation, which it said had been triggered by a public complaint.

It remains an open question whether the disavowal was entirely sincere.

Mahinur Niyazova, an outspoken journalist who writes and hosts talk shows for the Respublika newspaper and website, told Eurasianet that she believes Tarasenko could have been charged had there not been such a public outcry. Also, it is possible just the summons alone was an act of intimidation intended to deter public criticism, she said.

If the latter were the case, it would signal that Jeenbekov’s administration may continue in the mold set by his predecessor, President Almazbek Atambayev. Jeenbekov has been at pains to strike a different note from his ally-turned-antagonist, but some habits may prove hard to break.

In 2017, while Atambayev was still in the saddle, the State Committee for National Security, or GKNB, the successor agency to the KGB, drew up a list of 45 people deemed guilty of “negative publications addressed at the head of state.” The offending material was mostly on social media platforms. Eleven formal cautions were issued as a result of these efforts.

A government-loyal lawmaker who initiated the GKNB’s push equated insulting the president with attacks on the national anthem and coat of arms. Those are state attributes that, unlike the presidency, enjoy constitutional protections from insult.

Officials in those countries would unlikely have tolerated something like the long-running Tales of Beshbarmakia, a political satire blog run by the country’s largest news agency, AKIpress.

Founded toward the end of the presidency of Askar Akayev, who was ousted in 2005, the blog presents real-life political confrontations in the form of fairytales that take place in a hypothetical country named waggishly after the popular meat and noodle dish Beshbarmak.

In recent tales, a character recognizably based on Atambayev appears in the guise of Forumbek Avtomashev – the name is a nod to the erstwhile leader’s business concerns. Jeenbekov is Chykeshikov, recalling an incident when he publicly dressed down a subordinate using an informal Kyrgyz-language equivalent for “be away with you.”

Still, this is a far cry from the kind of gloves-off mockery one might expect from, say, U.S. television shows like Saturday Night Live or British satirical magazine Private Eye.

"We never sought to insult anyone," an AKIpress representative told Eurasianet on condition of anonymity. In fact, "many politicians dreamed of being featured in Beshbarmakia" because of the blog's popularity.

And yet, reader comments under the blog have in recent times grown more aggressive, the representative noted, a tendency the agency attributes to the rise of online trolling in the country.

Tellingly, Tales of Beshbarmakia was not updated from May 2016 all the way through 2017. Among the much-discussed major events missed during the hiatus were the tense presidential vote that brought Jeenbekov to power and an unseemly diplomatic row between Atambayev and his Kazakh counterpart, Nursultan Nazarbayev.

The AKIpress source attributed the lack of tales during this period to a “creative crisis” and a shortage of authors, rather than a rapidly deteriorating environment for free expression, however.

If anything, the slow-burning conflict raging between Jeenbekov and Atambayev behind the scenes may help curb any inclination the new leadership may harbor to crack down on critics.

Justifying this notion is the fact that Jeenbekov has not yet decided what to do with Atambayev, his critic-in-chief, who retains influence over several media outlets despite losing out in the political tussle.

Real tests of Jeenbekov’s attitude towards criticism still lie ahead, said Niyazova, the journalist. One event to watch will be the traditional end-of-year press-conference. Atambayev reveled on that stage, sometimes using the event to heap abuse on political opponents and activists, while leveling crude barbs at journalists with awkward queries.

“So far, we see that [Jeenbekov] is less public and he doesn’t enjoy calling out people like the last head of state,” said Niyazova.

The press conference, assuming it goes ahead, will be the real proof of Jeenbekov’s immunity to “uncomfortable questions, including some that I plan to ask him,” she said.